Cousin Chief aka Chaz Louee is an emcee and photographer who grew up in both East Baltimore and Northern California. His appreciation for the arts was evident from a young age, but it wasn't until the age of 18 that Chief would begin to study and practice his crafts seriously. Channeling energy from various regions and movements throughout history including the 70's Soul/Funk era, 90's Neo Soul/Hip Hop & Southern Trap music, his aim is to offer a counterbalance to what is considered stereotypical in rap music and Hip Hop culture as a whole. Chief's lyrics come from firsthand life experiences and aim to comfort the disturbed and to disturb the comfortable. His debut EP, 'This Ain't Party Music' was released in August 2018. In 2019 Chief looks to take his creative passions to new heights. 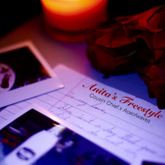