YOUNG THROWBACK - Recording artist and CEO of Money Mafia Millionaires, Young Throwback is eager to take his career to the next level. Newly signed to brother Gucci Mane's label his focus is on making the most of his movement. At the age of 16 he began touring with Gucci Mane as his hype man which inspired him to become an artist. His infectious personality and raw talent have gained him the support of numerous industry heavy hitters such as MissChiggaATL (A Lotta Loot Ent), Caveman Rosario, Shawna Reed (320MG), Sean Paine, 1017 Brick Squad, everyone a part of MMM and many more. hrowback has been hard at work collaborating with producers Metro Boomin, 24k, Sonny Digital, and Lex Luger on his forthcoming project #SauceLord2. Sauce Lord 2 Power I'm Seekin mixtape is hosted by Gucci Mane. 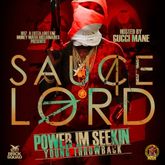