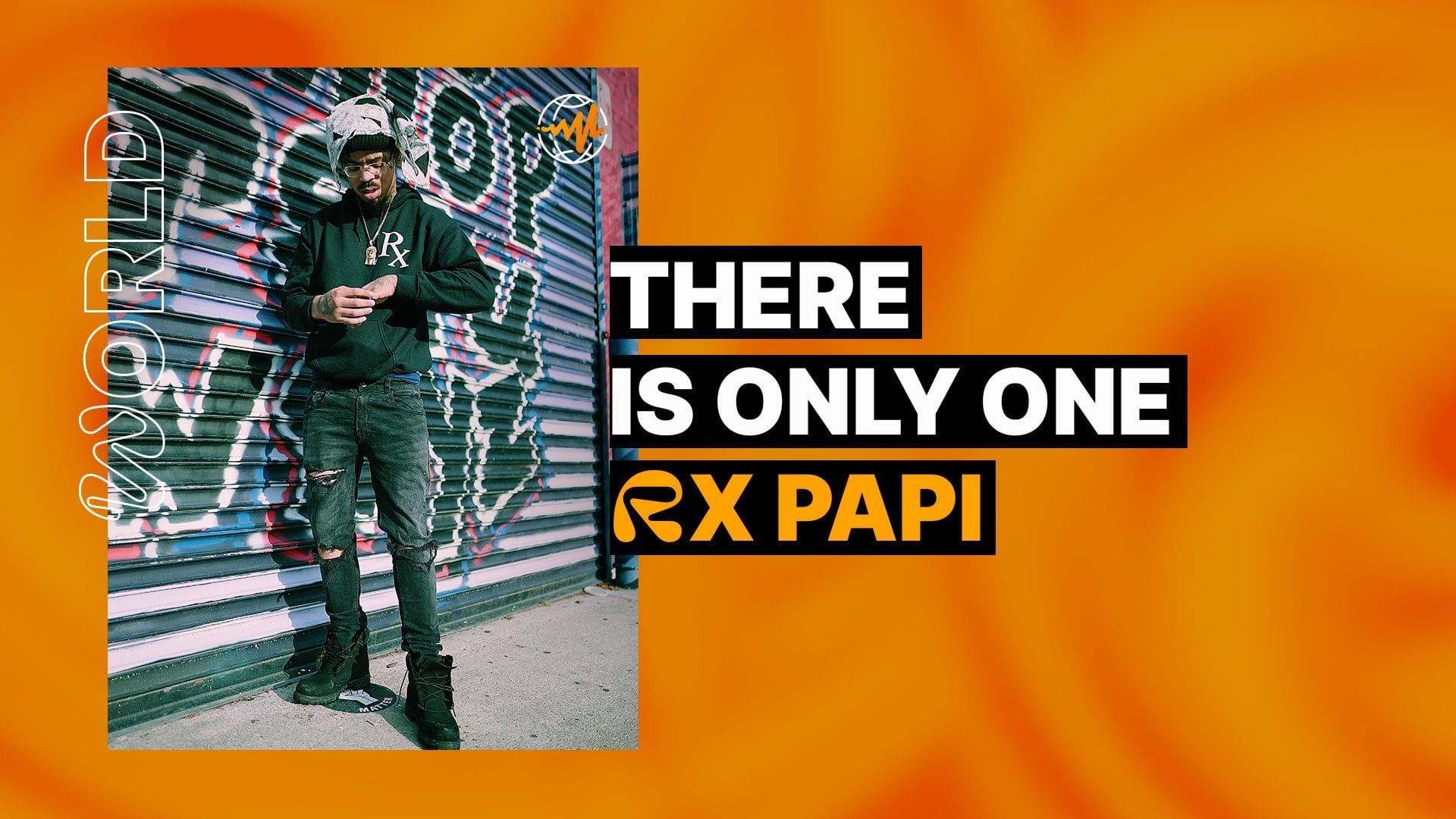 Rx Papi announces his arrival on the other end of our phone call with a convincing rendition of a DJ tag familiar to any fan of DatPiff-era Southern rap: “Trap-A-Holics mixtapes.” In many ways, the Rochester rapper’s music is a culmination of multiple threads that have touched every corner of the genre in the last 15 years. Across his prolific run of mixtapes in the past year and change, Papi brings together the vivid storytelling of Gucci Mane, the uninhibited swagger of Max B, and the avant-garde humor of Lil B. Still, like all the rappers mentioned above, he remains his own, fiercely distinct personality.

In recent months, Papi has built a growing cult fanbase online, drawing people in with his constant uploads and the instantly memeable refrains in his songs. He has a tendency to open songs with the line “Walk in this bitch like,” and then name cultural figures varying from Monta Ellis to Al Pacino. But his online presence wasn’t always so pronounced. In one of his earliest videos, Papi, then going by Lil Fleechy, can be seen shooting dice and freestyling to the “Oochie Wally” beat in a Rochester park. He rails off lines about having “sold a lot of rocks out a lot of spots,” before threatening to slap someone’s grandma for talking crazy.

It wasn’t until a few years later—after getting out of jail and switching his name to Rx Papi—that he started to reach listeners outside of his hometown. His rapping has retained that same animated, off-the-cuff energy, but he often shows a wide-ranging ability as a narrator. On his most recent project, 100 Miles & Walk’in, he shifts from a visceral nightmare of finding himself dead in a bathtub to intensely personal real-life memories of his mother and aunt, to “feeling like a white boy in Laguna Beach.” His freestyling takes songs to strange and interesting places, while his constantly rotating cast of rising producers provides an often ambient-leaning palette for his cinematic raps.

“Every day I just give less of a fuck,” Papi tells me during our interview. “When I rap, I just be trying to get mad shit off my chest and out of my mind.”

It doesn’t take much clicking around to find out about Lil Fleechy. Tell me about him.

Lil Fleechy’s a dirty, filthy, sticking, greaseball. That’s all he is and that’s all he’ll ever be. Just a no-good, untrustworthy, low-down dirty-ass, conniving-ass boy.

That was never my rap name. That was some shit they called me in the hood. I tried to rap under that name being that’s already what people knew me as. It didn’t work because I was doing other shit under that name too that didn’t go hand-in-hand with music. 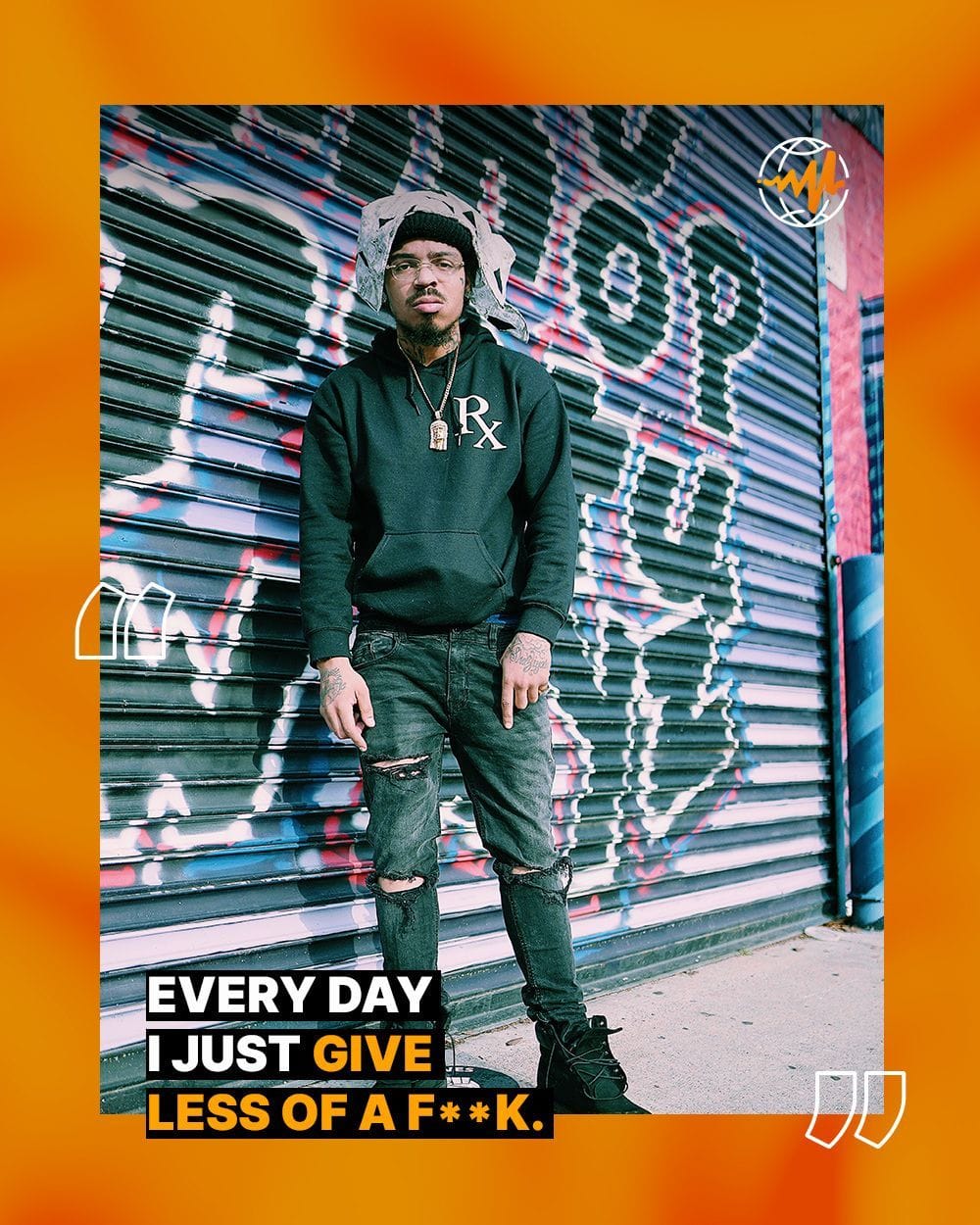 What else was going on in your life at that time?

I didn’t really care about nothing, so I was just living life, doing whatever I wanted to do, however I had to do it. I always was good at rapping so I was always doing that. But people would be like, “Oh, I ain’t listening to that ‘cause he did such-and-such to him, he did this and that.” They didn’t even want to fuck with me because they had heard I did some shit.

Rochester probably isn’t a place that a lot of rap fans around the country are familiar with. What was it like growing up there?

It’s just like everywhere else: you got the good, the bad, and the ugly. I grew up on the eastside. My pops died early. He died in front of me when I was like four. I was a rebellious kid. I didn’t listen too much, ain’t care about too much. Moms tried every way she could. Shit happens when you out here, so of course, some shit happened to me. I took more losses, lost more family members along the way—loved ones, friends. All that type of shit.

What kind of music was important to you growing up?

It was the beats that would catch me at first. I always listened to a beat before I even heard the song. It would be little melodies that would stick in my head. My moms is Puerto Rican; she would be playing reggae and shit and some of the beats—I don’t know what the fuck they be saying—but the beats would be fire. I was listening to a lot of Max B, Gucci Mane, OJ Da Juiceman.

Were a lot of people listening to those rappers in Rochester?

Your music is starting to find this cult fanbase online but it’s sounding like you weren’t really on the internet a lot at that time.

I’d be on Facebook and shit but, other than that, hell no. I was on Facebook being ignorant. I was posting pictures and dissing the opps, going live on the opp’s block. I was viral on Facebook for all the wrong shit. 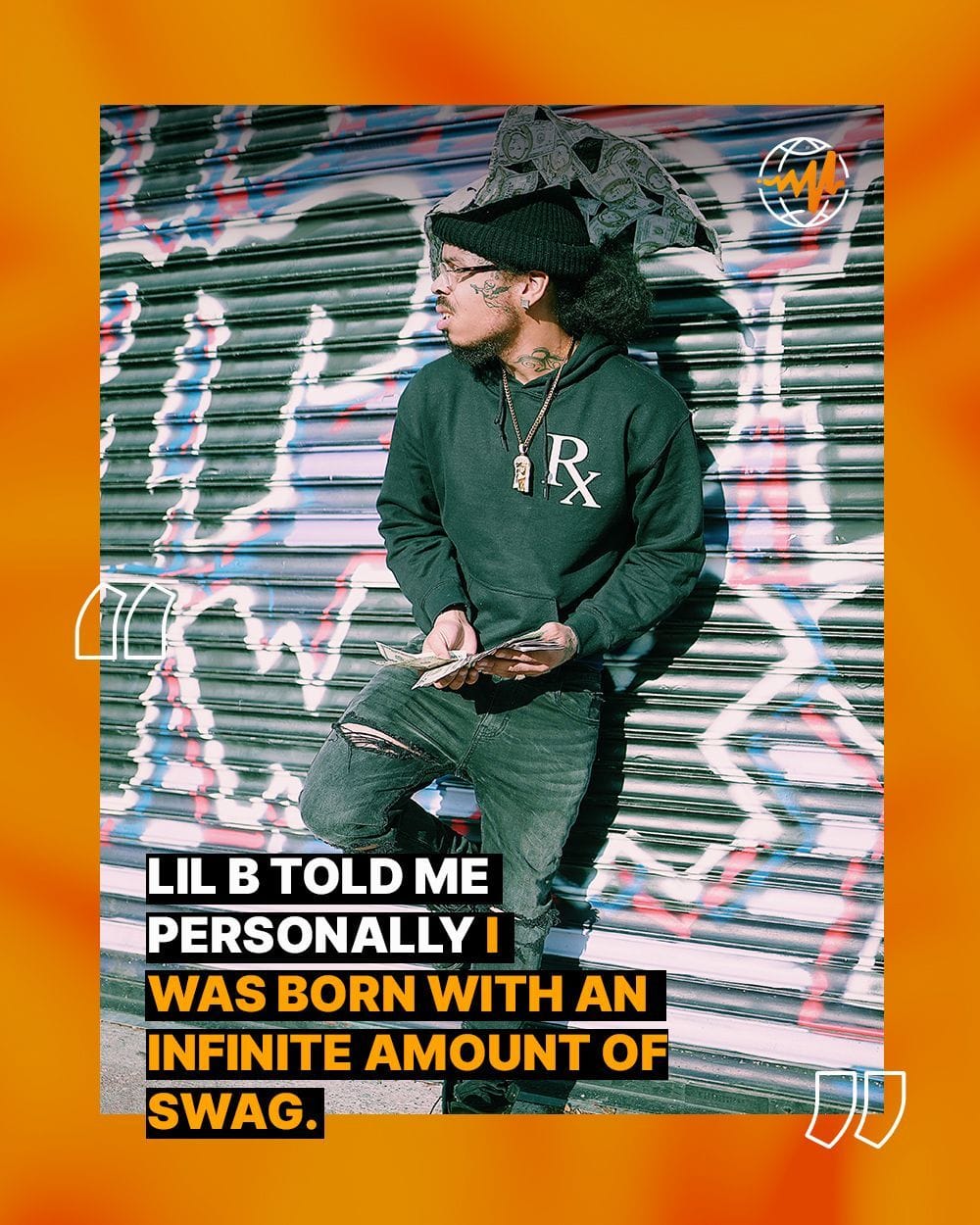 How did you start becoming aware of the internet as a way to put yourself and your music out there the way we’re seeing now?

I was listening to some artist that was using this YouTube page. I reached out to the dude who was running the page and dropped this song. It went viral, for me, and did probably 5,000 views in a week. It was hundreds of comments from people I don’t know from a hole in the wall and it was all positive, everything valid. The first song I put out was “Chanel No. 9.” That was the first song I did out of jail.

I was on an ankle bracelet, so I could leave but I had to be back by curfew and shit. When I got out of jail, I ended up hitting a lick, on the ankle bracelet and all, and ended up getting this little studio setup. I needed to hit that lick ‘cause I needed the studio. Then I started going haywire with the recording.

How do you think your sound has developed from those early days till now?

Every day I just give less of a fuck. When I rap, I just be trying to get mad shit off my chest and out of my mind. That’s why a lot of my shit sounds vulgar. They say I talk about a lot of shit I shouldn’t talk about, but I don’t care about none of that. If it’s on my mind, I’ma say it. It be all over the place though.

“Dead Man’s Letters” is a whole story. Some other songs are really funny. One thing I notice listening to your music is there are a lot of recurring characters like “Auntie.”

Even when I’m not in that environment, Unc and Auntie are always gonna be a part of the story. I got a super photographic memory, so I remember a lot of shit vividly down to great detail. I just gotta close my eyes, and I’ll see it all over again like my favorite movie.

What is your favorite movie?

Mad Max, the original one with Mel Gibson. I watched that before I ever watched any type of Disney movie. They ran my son’s baby over, killed his bitch, but he got on 10 and got with all them niggas one by one. Great movie.

Another person who comes up a lot in your music is your mom. Tell me about your relationship with her.

Growing up, it was a love-hate relationship. She did shit I ain’t understand. I did shit she ain’t understand. But over time, I grew up and got older, shit got way better. My mom is like my best friend now. My mom’s damn near like gang. 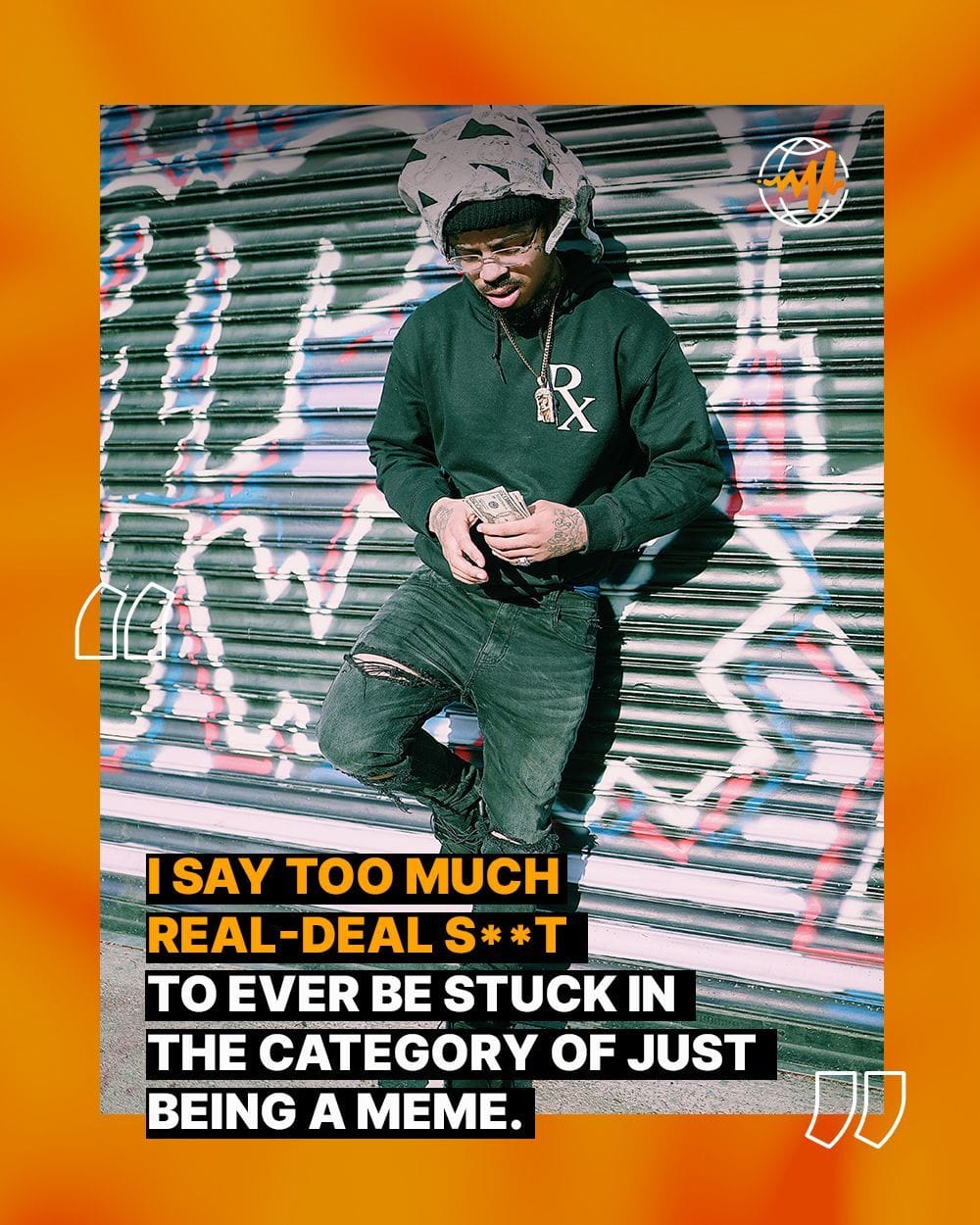 We talked about how things started to pick up once you hit the internet but, aside from the attention there, what else has kept you motivated and made you really focus on music?

The biggest thing is this shit is keeping me out of jail. I used to be on some back and forth to jail shit. This is the longest I been out of jail ever. Then once I started getting money for features and shit I was like, No way. I gotta keep going. Everybody always looks at the rap niggas that “made it” or it looks like they made it. I gotta get like that. I always want better shit. Yeah, you got a nice crib, but you want a better one. Yeah, I got a nice car, but I want a better one. Yeah, I got jewelry, but I want better jewelry.

Yeah, that’s it. A bunch of shit niggas get caught up on.

It’s been interesting to see the way the internet has reacted to you. I’ve seen people compare you to Lil B—

Lil B told me personally I was born with an infinite amount of swag, and I was gonna die with a hundred-thousand bitches on my dick. I just wanted you to know he told me that personally. I was just bumping Lil B last night. I almost crashed my Audi.

Do you ever worry about people only seeing the humor or the “meme” of what you’re doing and misunderstanding it in that way?

Hell nah. I say too much real-deal shit to ever be stuck in the category of just being a meme. On top of that, I got swag. I got so much swag.

Does the idea of being “independent” have any value to you?

If a label said they wanted to sign me, I’d listen to ‘em. But, then again, I ain’t no fool. And I know how to read good as a bitch. I got a few little things I wanna do my damn self anyway. I’d always listen though. If it sounds right, I’m going with whatever sounds right.

What do you want the people watching and listening to you to take away from what you’re doing?