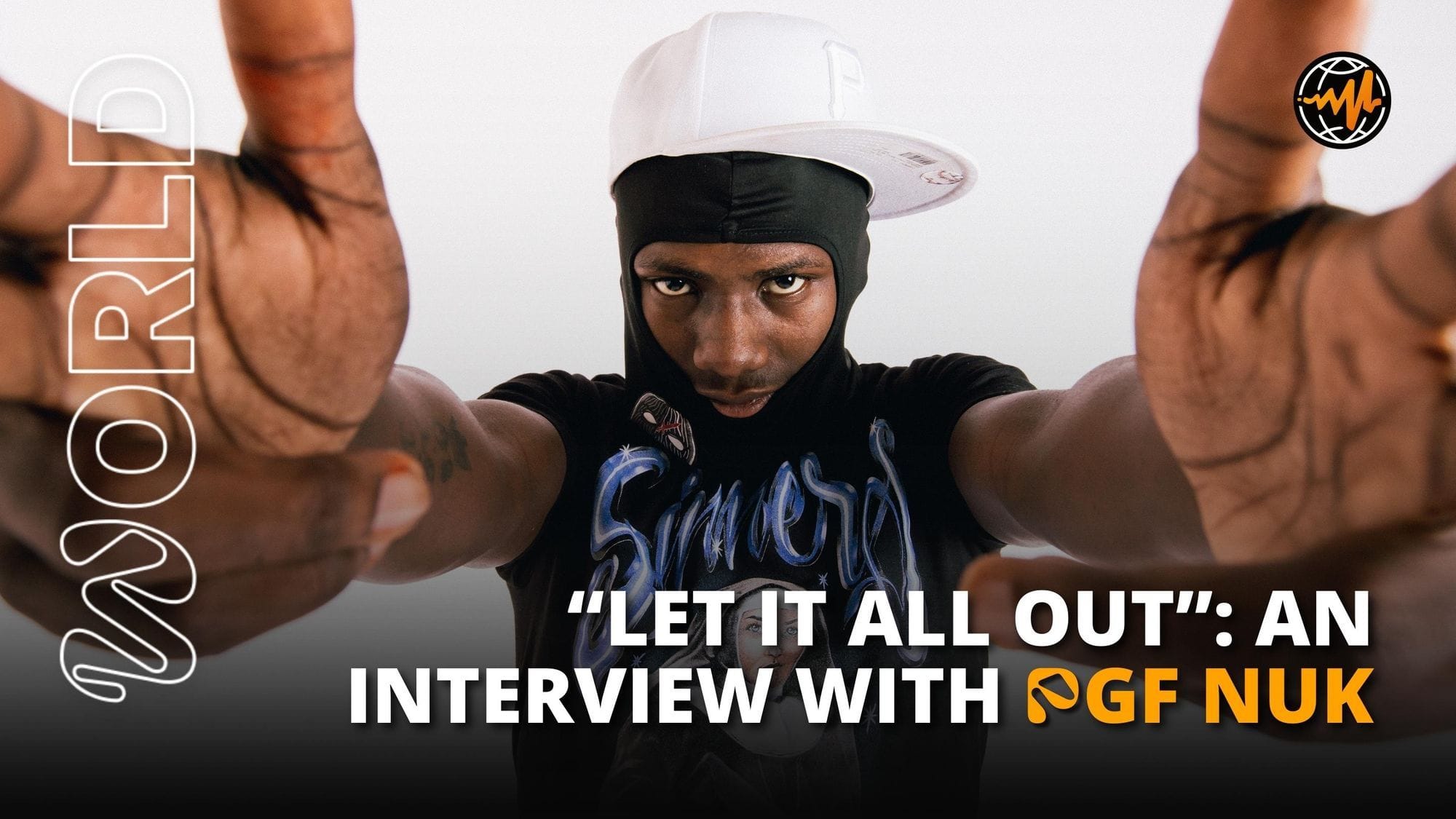 When PGF Nuk was young, his mother instilled in him an insatiable curiosity: “Main lesson she taught me was to go,” he recollects with a sentimental smile. “Go experience life,” she’d tell him, “Go see what’s out there.” It’s this same instinct that propelled him from a high schooler rapping on Facebook to sharing a stage with his hometown hero Lil Durk in the span of just three years.

From a young age, Nuk felt destined to be a breadwinner. “I was 15, running around, making $600 a day selling candy,” he elaborates. “My momma always knew I was gonna be a provider.” Nuk always poured himself into each of his ventures. But when he stumbled into rapping at the persuasion of a close friend, something clicked—passion entered the picture, and he hasn’t looked back since.

Born and raised in Englewood, PGF Nuk has throttled forward as the newest prodigy of Chicago drill. While drawing from his city’s rich musical tradition, he imbues his craft with fresh-faced charm. He raps with a mischievous twinkle in his eye that, to a passive ear, might cloud his seasoned finesse. 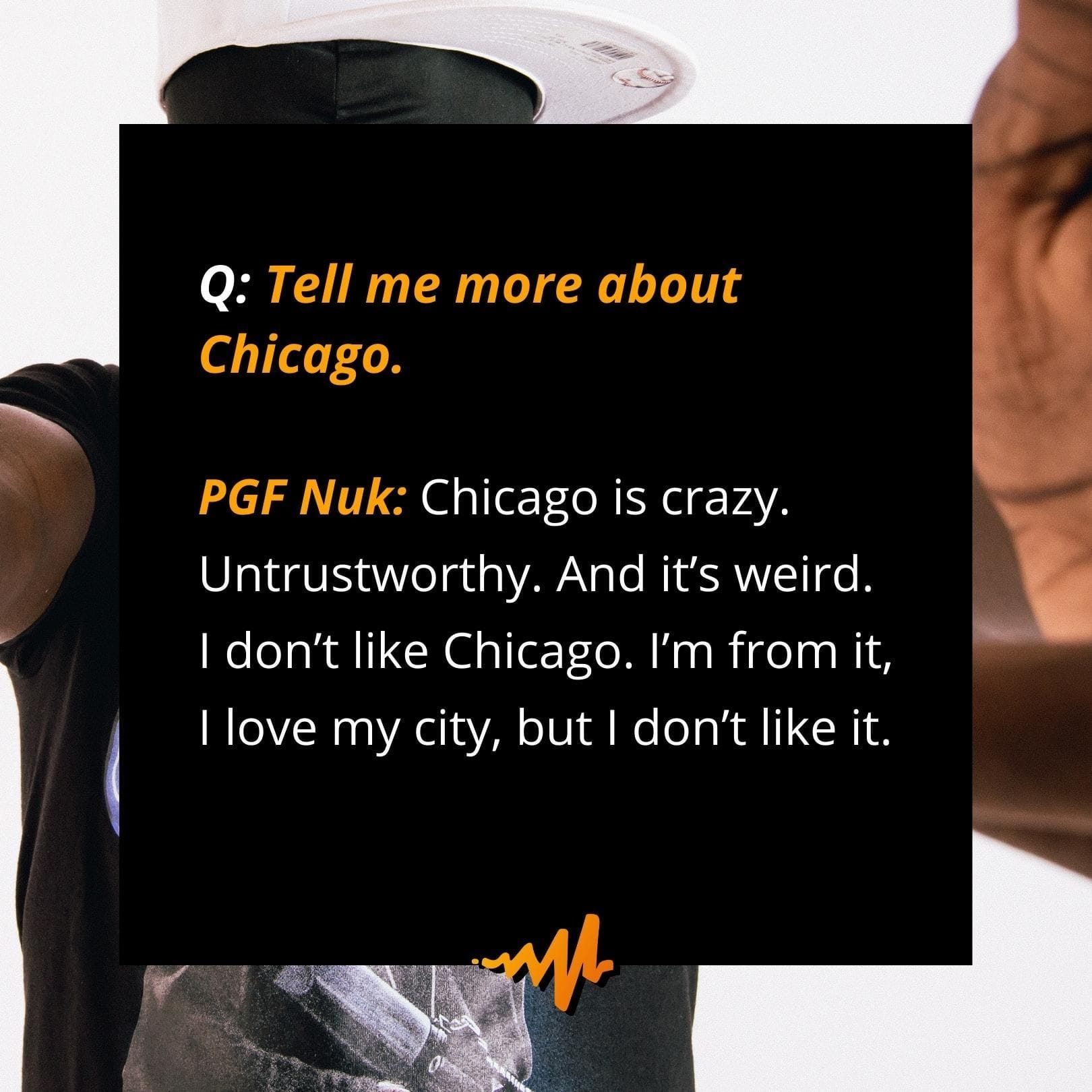 Nuk’s motivation is beautifully simple: he stays true to his path because he “just loves doing it.” Perhaps he’s also chasing an evasive high (“when I catch my flow, it be so over with”), or perhaps he’s found in rapping an outlet for a certain restlessness—an itch to “just go.” Whatever fuels his fire, his consistency (“my main superpower,” as he’d describe it) suggests an artist with a great deal to say.

Since Nuk earned his first million views on 2021’s “N****s Be Bitches,” the milestones have been flying by. “WADDUP” exploded just a few months later, securing him a guest verse from Polo G and catapulting him to the national stage. As those three little words (“Ayy, bitch, waddup?”) cut through the heat, pouring from speakers coast to coast, Nuk’s measured intensity and stuffy-nosed delivery are capturing the hearts of listeners everywhere.

Tell me about your name. Where did that come from?

I had a homie—his name was Psycho. He passed away so the gang got the name “Psycho Gang Family.” My rap name came from him, Nuk came from my momma. My [real] name starts with a “V,” I don’t know why she gave me the nickname Nuk.

She seems really important to you.

She very important. She the most important thing in my life. I love my momma to death. I don’t play about that lady, I can’t. She always was there for me.

She must be very proud of you now.

She very proud of me, she texts me every day. It’s just, I hate the fact that I come from poverty and money isn’t that long. So most conversations will be about money now, especially now that I’m grown and shit. She won’t necessarily talk to me about shit like when I was young. It ain’t about the lessons no more, it’s about what’s really going on in life.

Tell me more about Chicago.

Chicago is crazy. Untrustworthy. And it’s weird. I don’t like Chicago. I’m from it, I love my city, but I don’t like it. It just be too much hating going on. It don’t even be real reasons why they do the stuff they do. 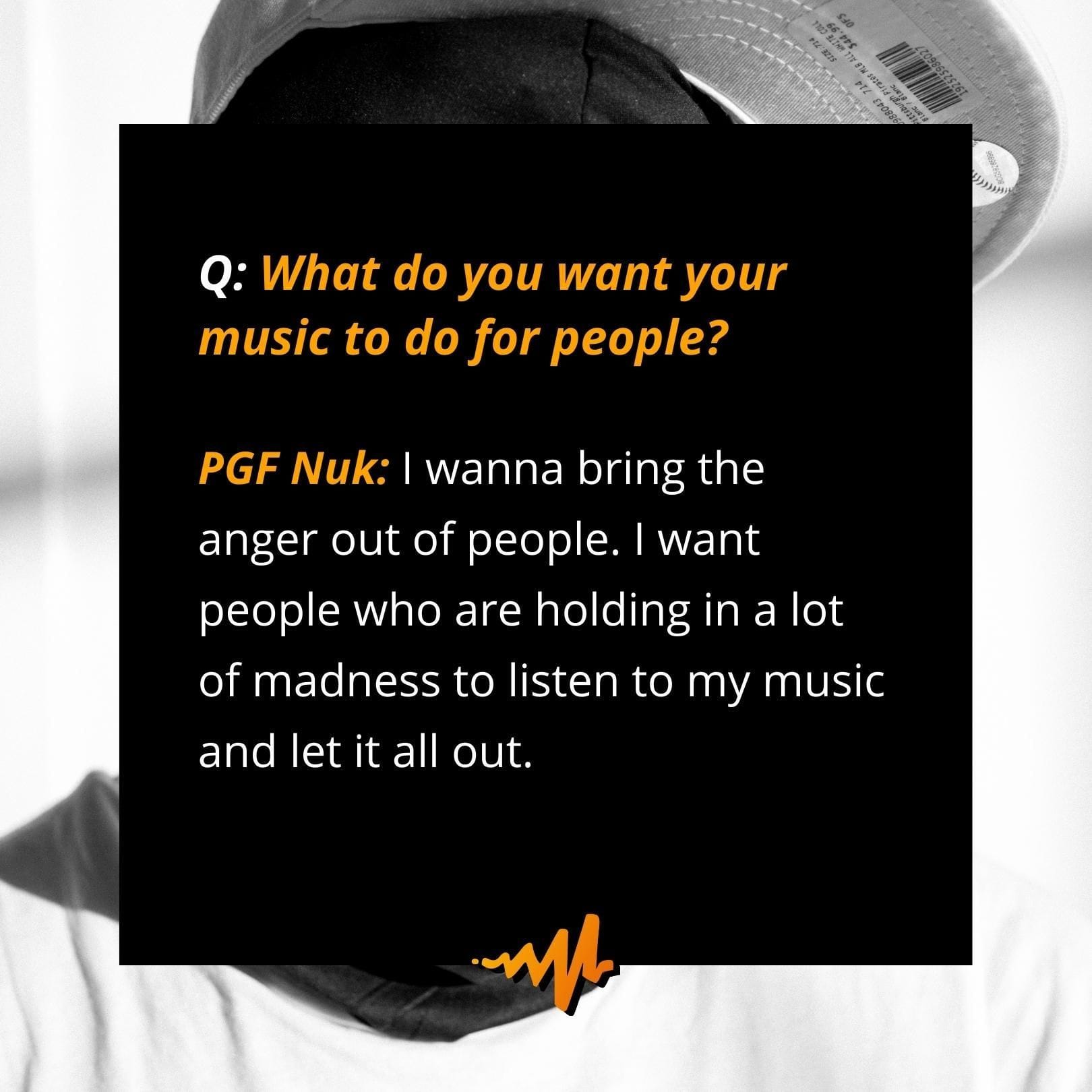 Do you feel like Chicago has shaped you musically? A lot of giants have come out of there.

It’s shaped me musically a lot. Cause all the people that are giants, I know they ass. Chicago is big if you stay in one spot, but it’s small if you move around. I’ve known Lil Durk my whole life. I been knowing G Herbo. Chief Keef was at my crib before he got on. I really be in the street. That’s why it was so easy for me to get as big as I am now. I got real hood connections with people. Now you can call it industry connections, but before I got big, it was street connections.

Your first song blew up. “HennDusse”…

Boy, I love that song so much. My first ever song. First in life.

When I made that song, I was going through a lot. I was 16 or 17, drinking liquor. I just lost two homies. I lost Psycho a couple of years before that, then I lost one of my youngest friends. He was like my little brother.

That’s what really put us in the streets. When my homie Psycho died, I was just on my first taste of death. When my other little homie died, it just put me out there. I’m like fuck it, we finna go slide, I’m finna risk my life.

I went viral on Facebook rapping that song just with my homie recording me. And then I was like, “I gotta shoot a video.” First ever time shooting my own music video and that motherfucker did like 100K [views] in a month. Then that bitch went to 200K the next month and every month it got 100K new views.

Working with Polo G—how’d that come about?

Polo G is my cousin through marriage, so we got some type of connection. Polo really locked in with his city. When it comes down to really working with people that’s upcoming, he always in the city doing it. So his side of the family come tell me, “He always out here trying to find new rappers, but y’all saying the same shit. Y’all just drilling.” I’d be like, “I ain’t trying to hear that shit. You better come on with it.”

I just started DM-ing him and shit, but he never would DM me back. Then, his birthday comes, and he on [IG] live, drunk as hell, playing my song.

You kinda brought him back…

To his savage side. That’s what he said at the video shoot. He got hit in the head and everything, people trying to reach over him. He was kinda getting a little pissed. But then he looked at me, and he was like, “Bro, I ain’t felt like this in a long time.”

He was real happy that he did the song. He was like, “You brought me back to that mode.” He started getting real with me, I started getting real back with him. I’m like, “Bro, I been listening to you for a long time.” Then I start talking about, “Do you know who your auntie is, bro? That’s my auntie!” 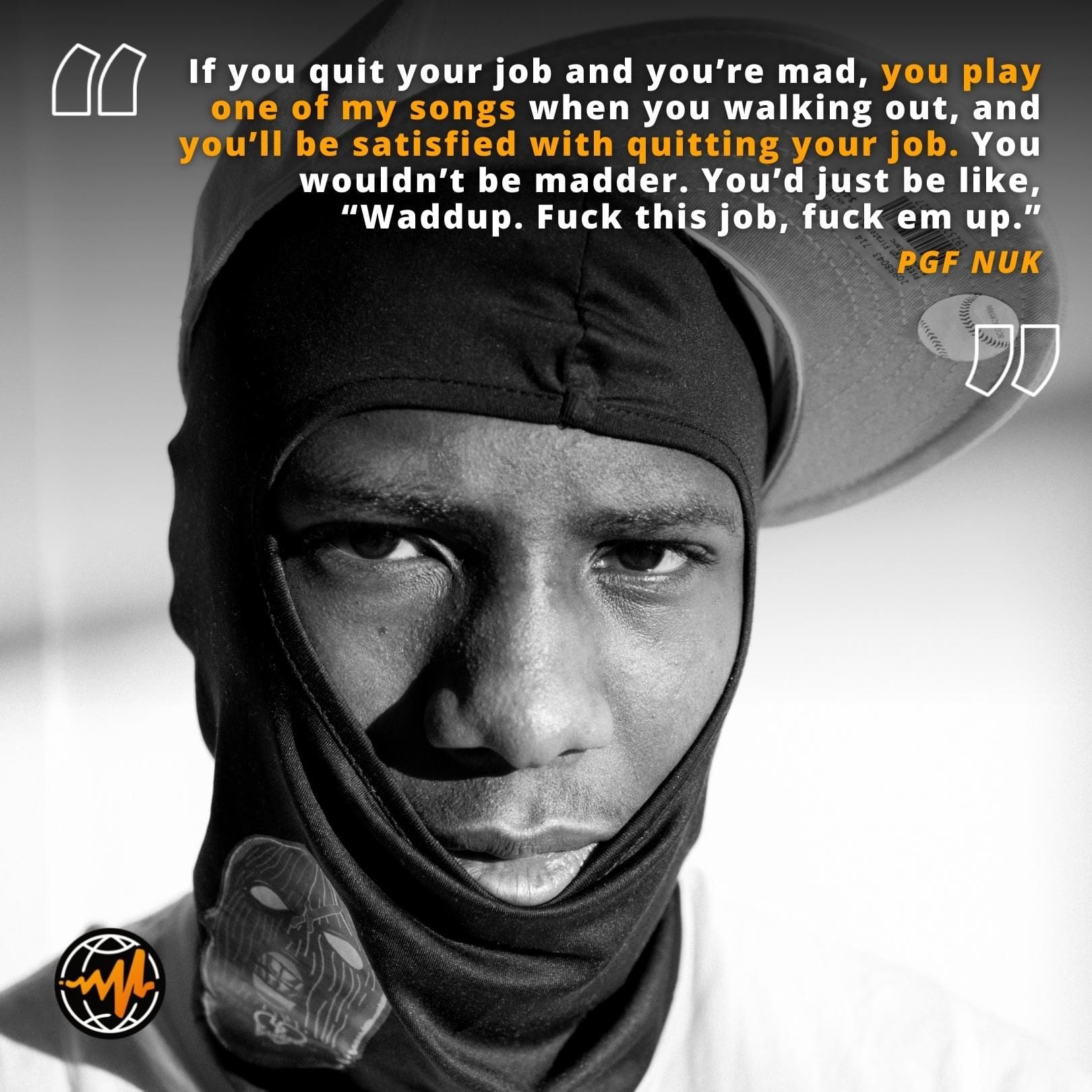 What do you want your music to do for people?

If I were gonna go quit my job, I’d put on one of your songs, you know? Something like that.

Yeah! Like, if you quit your job and you’re mad, you play one of my songs when you walking out, and you’ll be satisfied with quitting your job. You wouldn’t be madder. You’d just be like [raps] “Waddup. Fuck this job, fuck em up.” [Laughs] And just go about your day after.