I am a producer, singer/songwriter, rapper and DJ. At the vanguard of a new wave of artists, Spoek is defined by his unique take on electronic music. Spoek’s early work included collaborations with his mentor, South African DJ Sibot, and releases on influential underground dance music labels Boys Noize Records, Mad Decent, Shitkatapult and Get Physical which saw his profile rise through collaborations with artists including Robyn, Diplo, Schlachthofbronx, Cerebral Vortex, Adam Tensta, Douster and Djedjotronic. Debut album ‘Mshini Wam’ was released to critical acclaim in 2010 on BBE Records, demonstrating Spoek’s wide range of styles and influences, and coining the genre/style ‘Township Tech’ – a description of the work by Spoek and his contemporaries in furthering the soundscape of Sth Afr 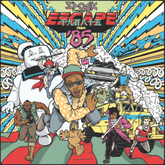