Snap Capone, is a rapper/songwriter from Peckham South East London. As a teenager, he began taking part in writing and studio session and as his love and talent developed he became intent on positioning himself as a well-respected underground rapper. Here the hard work began. To date Snap has received millions YouTube views on his individual and collective videos, and with a large international following regularly receives performance requests from overseas, notably Canada, USA, France and the Netherlands. A charismatic and creative young man, continues to wow the music world with a raw talent and passion like no other, his confidence can transfer easily to anyone’s inner life, with a little suspended disbelief, and that makes him a kind of motivational speaker, he is at the very 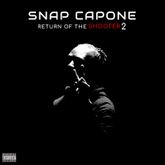 Snap Capone Return Of The Shooter 2