Mobb Deep is an American hip hop duo from Queensbridge, Queens, New York, U.S., that consists of Havoc and Prodigy. The duo is "one of the most critically acclaimed hardcore East Coast Hip-Hop groups. The group is best known for its dark, hardcore delivery as exemplified by the single "Shook Ones (Part II)."Mobb Deep has become one of the most successful rap duos in hip hop, having sold over three million records. 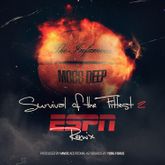