Lil Ayy is a real young star from Leeds, North England. At the early age of 17 already begun to build a fan base across the country. Inspired by rappers such as J Hus, D Block and Dave, Lil Ayy has put his own twist to his sing/rap style which has already seen him reach his first 100.000 views on YouTube. From self producing his music and visuals to holding his own headline showcase/launch party, Lil Ayy has seen the small club events where fans know his lyrics word for word, to the larger 20,000 + people leeds carnival. 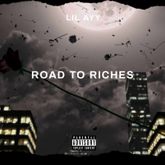