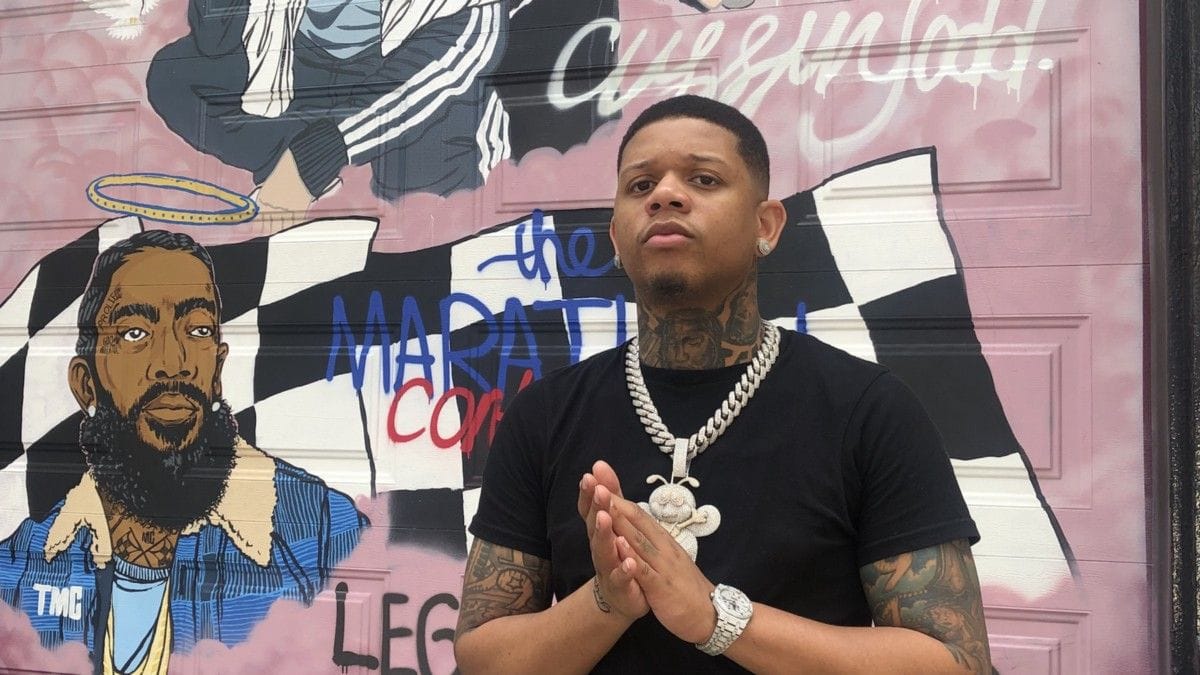 With his new project out now, the “Bacc At It Again” hitmaker won’t be stopped.

When Yella Beezy’s 2017 breakout single “That’s On Me” pushed his name from regional talent to mainstream rising star, it would have been easy to coast off the unexpected smash success. Without major label support, the song hit No. 1 on mainstream rap/R&B radio and caught the attention of Beyoncé and JAY-Z, who asked the Dallas rapper to open the Arlington stop of their On the Run II Tour.

The artist born Deandre Conway was just getting started. “Bacc At It Again” is more than just the name of his latest hit and second song to chart on Billboard’s Hot 100, it serves as a guiding principle for Yella Beezy’s young career.

In October of 2018, the artist was in a white Mercedes Benz G-Class riding down the Sam Rayburn Tollway heading home from the club when the vehicle was fired at over a dozen times. Beezy was struck by three bullets and rushed to a nearby hospital.

His recovery was, miraculously, swift. He would leave the hospital the next day, and, just two weeks later, release the star-studded remix to “That’s On Me.”

“Bacc At It Again,” then, is a fitting return for Dallas’ next great rap star. His first official single since his close call with death is another hit, and, through features from industry heavyweights Quavo and Gucci Mane further validation from rap’s ruling body that Yella Beezy’s thick Southern drawl and Dallas-iconic shag haircut was here to stay.

In a generation where trap, melodic emo rap, and mass appeal trends reign heavy, Yella finds his own niche with his Dallas swag and simple ear for catchy bops. And instead of riding the wave of his breakout hit, the 26-year-old currently signed to L.A. Reid’s Hitco imprint knew he couldn’t let his buzz die down, no matter the obstacles.

With his new mixtape Baccend Beezy out now, Audiomack sat down with Yella Beezy in Los Angeles to talk about Dallas, creating great music over trying to force hits, and his mindset in the wake of the attempt on his life.

For those who don’t know, who is Yella Beezy?

He’s who everyone wants to be. Just a down-to-earth, cool, player dude. A successful, blessed individual.

“That’s On Me” was a breakout smash. Did you think it would blow up like this?

Not “That’s On Me.” I kind of slept on the song myself, but it turned out to be my biggest song as of right now.

I was recently with an Atlanta artist who hates his single that blew him up. Do you ever get sick of hearing it?

Nah, it’s different for me. I like it because of the success it brought me. Right now, I can’t get tired of it even if I want to get tired of it. The fans aren’t gonna let it die. To this day, it still gets the most reactions when we perform it. I’m good with it.

You represent Dallas down to the haircut. What does Dallas, Texas mean to you?

I’m waiting to get back to it right now. I miss it. [Laughs] Dallas is like your first-born child. You love it, can’t get enough of it. Everything: me growing up there, all the history I got, the shit I’ve been through. Just grinding to get out of it. When you’re on the road and on-the-go so much, you miss being regular sometimes and just chilling at the house. But that’s a gift and a curse because I don’t want to be at the house that much.

Can you explain your haircut.

It’s a shag. It’s not a mullet. That’s what it get compared to, but shag is a haircut that’s been around Dallas for ages. People still wear it to this day. I’m not the only one. If you go to Dallas, you’ll see a lot of people with shags. It’s something Dallas just never got rid of.

Who were some of your biggest influences growing up?

Just my family. I didn’t really have any role models. Looking at the rap shit, I didn’t have no specific person I looked up to. Just the Southern region of music, from the UGKs to the Geto Boys, all that type of shit.

How does the Dallas hip-hop scene and sound differ from other Texas cities like Houston?

Just our lingo and our language. We don’t really rap the same. Of course it’s different everywhere, but Dallas really doesn’t have a distinct sound. Everybody got their own sound in Dallas. It ain’t a lot of people rapping like each other.

How do you plan on putting on for your city as your career grows?

Just try to do shit we were hoping people would do for us when we were trying to make it. Even a simple cosign — it’s the little things that count. Even if I gotta stand by somebody who’s buzzing, get a song, help them get a deal, or bring ’em over here with me, not just let people with talent sit there and you want to be the only one shining in the city. Elevate everybody.

You were shot three times last year in a drive-by. What was going through your head in those moments?

“My album finna drop.” Nah, I’m lying [Laughs]. I can’t even remember. Shit, just “Get out this mothefucker safe. Hurry up, I want this shit to be over with quick.” I said, “Just get me to the hospital,” that’s it.

That’s obviously an extremely traumatic event. How did you cope with the aftereffects?

Regular, just living my life. I didn’t let it affect me, didn’t let it dictate how I feel, how I move, how I was thinking. Fuck it, it happened. Shit happens everyday.

How did the attempt on your life change your perspective?

Why don’t you want people around you?

Do you still go to the club?

Before the music, I was going out. But when the music started taking off, of course I wasn’t finna just be in the club like that. Because if people can go to the club and see me for free, why would they pay to come see me? I don’t like being so accessible.

How are you using that experience as fuel to succeed?

I mean, I’m not even using it. I don’t care about that experience. I’m trying to be successful, period. Keep on prospering and making good music. Making myself better, staying active, staying in the mix, not cooling down or letting my buzz die out. Not being lazy. Even if I don’t wanna do shit, there’s shit that’s gotta be done. You gotta put in work.

“Bacc At It Again” with Quavo and Gucci Mane is climbing up the charts. How’d that record come about?

Being in the studio accidentally one night. I was in Atlanta recording for Wild ‘N Out. I just so happened to hit up Pee [Pierre Thomas] from Quality Control. He told me to pull up at the studio then we finna go to the club. I’m thinking I’m going over there to go to the club, but we ended up recording. We were all sitting around, they started playing some beats, Gucci’s like, “we need to get something in.” The song didn’t take no more than 30 minutes. The whole song, everybody’s verses and all.

Do you feel pressure to follow up the success of “That’s On Me” with another hit?

What is good music to you?

Something you can relate to from every avenue. Some shit that’s relatable. Some shit you wanna hear when you wanna party or just have fun. Some shit when you wanna be cool. I’m versatile, I can make every kind of music. I can get lyrical. Just put all that in one little bunch [and I’m good].

Talk about linking up with Pharrell on “Rich MF.” How’d that happen?

I got a call. They said, “We finna get you in with Pharrell.” Flew me out to LA, we got in the studio and vibed out. He had made another beat for me to record on, but I asked him, “Can you make a beat like something you’d hear back in the day?” He did [the “Rich MF”] beat in 10 to 15 minutes, real fast. He’s like, “I gotta go to a meeting, I’m finna step out right quick. Just record and I’ll finish the beat up.” When he came back, the song was done. He added one or two more sounds but that was murder he wrote.

Were you nervous at all?

Nah, I don’t really get nervous when it comes to the music part. I be trying to strategize and figure out the different types of beats I’m introduced to. Because I’m so used to one sound, I’m trying to get out of the box. To find a certain type of beat and make it sound right, that’s a challenge sometimes, like, “Okay, what can you put on this shit?”

How’s it different working with a legend like Pharrell vs. the new producers that you’ve worked with?

It’s really going off the producer’s vibe. Some people can tell you something, some people can’t tell you shit; they just know how to make beats. When you get someone who can give you advice and knows how to do something? You winning.

You were able to score a national hit in “That’s On Me” without a major-label budget or promotion. What’s the biggest lesson you’ve learned as an independent artist?

Just keep on grinding. When you independent, you gotta grind 10x harder. You reap the benefits better, but you gotta grind way harder versus the rest of the people who are signed to a major label.