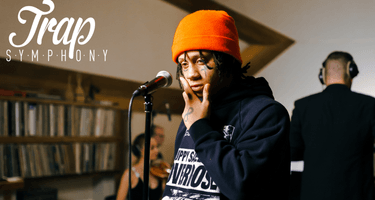 “Under Enemy Arms,” “Wish” and “Dark Knight Dummo” get the Trap Symphony treatment.

Oh my gaaaawwwwaawwwwwwwwd. Take a moment count my—

Big 14 know what the fuck goin’ on. Trap Symphony is back, and, as always, better than ever. The star of our latest installment: Trippie Redd.

As we await the release of Trippie’s upcoming project, Canton, Ohio’s finest came through to put some orchestral sauce on three of his biggest hits, including his newest single “Under Enemy Arms,” his melancholy collaboration with Diplo, “Wish,” and “Dark Knight Dummo,” his riotous hit that originally features Travis Scott. Trippie’s never been one to let genre boundaries dictate the expanse of his sound, and he sounds right at home fronting a classical/trap hybrid.

Shot and edited by Erikson Corniel, Trap Symphony was recorded at The Bridge Studio in New York City and features music direction and mixing by John Cleary, piano by Matt Compo, drums by Jon Brick, and strings by the Velveteen Ensemble.

Trippie Redd’s Trap Symphony follows performances by Migos, Chief Keef, A Boogie wit da Hoodie, and Rich The Kid. Trap Symphony has been described by Billboard as “truly must-watch cinema” and by The FADER as “surprisingly emotional,” while Noisey said, “You should absolutely watch every damn second of it.”