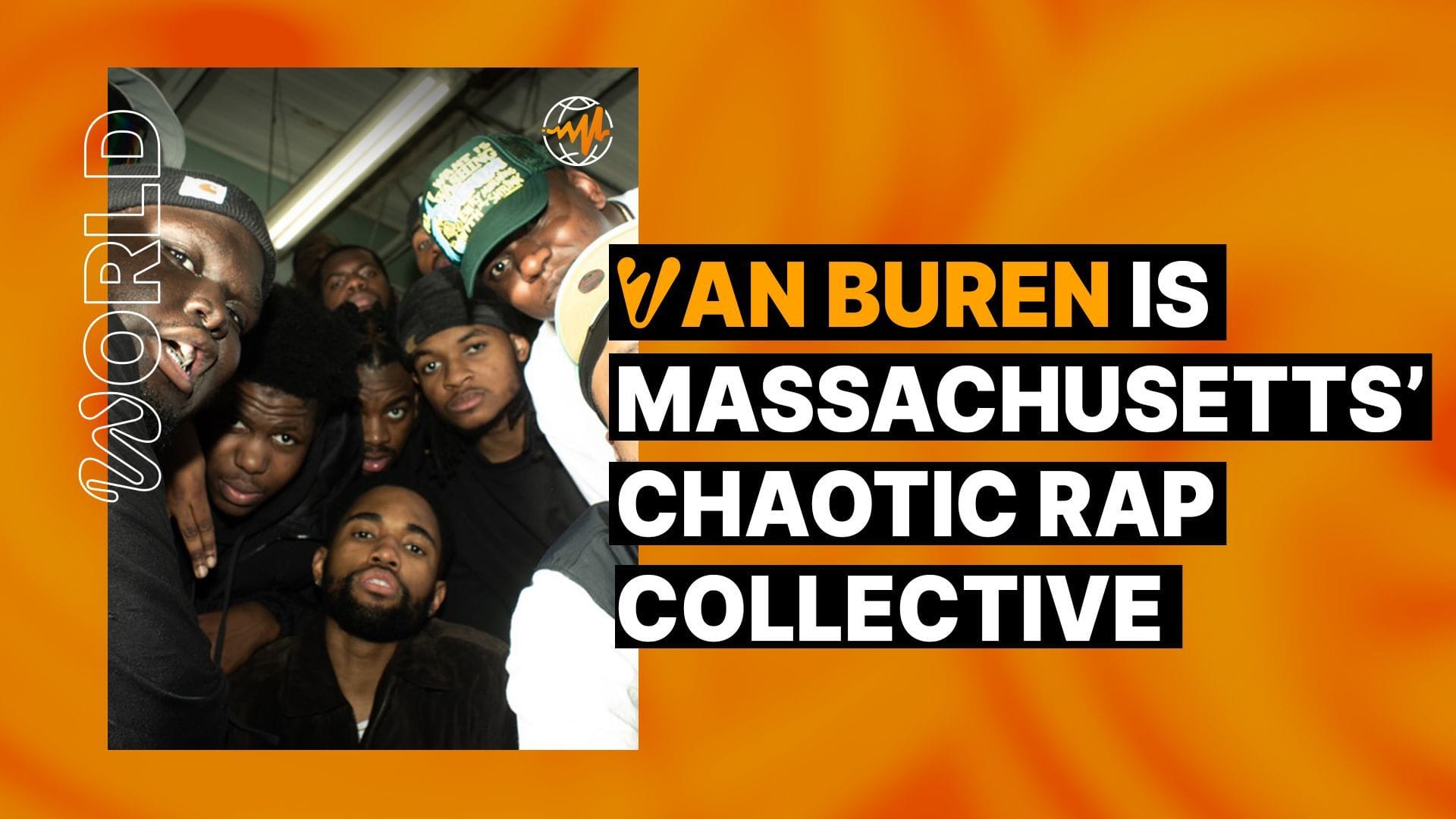 Van Buren is much more than just a rap collective. The group’s 11 active members—Luke Bar$, Meech, Jiles, SAINT LYOR, Lord Felix, Ricky Felix, Andrew Regis, Kiron, RLouie, Mo, and Shelby—all slide effortlessly between the roles of rapper, producer, PR, and fashion designer. The personalities of the seven members I’m able to gather on a Zoom call are distinct but in rhythm with each other. It’s the best kind of brotherly chaos.

Most of them met within their hometown of Brockton, Massachusetts, as children. Some grew up together. Some met in middle school. Some didn’t meet until they began frequenting local studio SoundLab and MA artist Latrell James’s personal studio, both of which doubled as community spaces. Friend and former member Rui came up with the idea for Van Buren in 2014 after seeing an episode of the sitcom Seinfeld that featured a gang called the Van Buren Boys. The idea stuck and, two years later, they slowly started crafting their musical identities.

The collective worked on solo and smaller group projects over the course of the next five years, most of which came together in a similarly spontaneous way as the infamous Dreamville sessions for Revenge of the Dreamers III (Regis actually attended the sessions in 2019). Bad for Press, their first statement as a full group, is breathlessly paced and full of personal stories. Released April 16, it’s a reflection of the group itself, a bunch of Black boys from Brockton who are ready to make a lasting first impression. 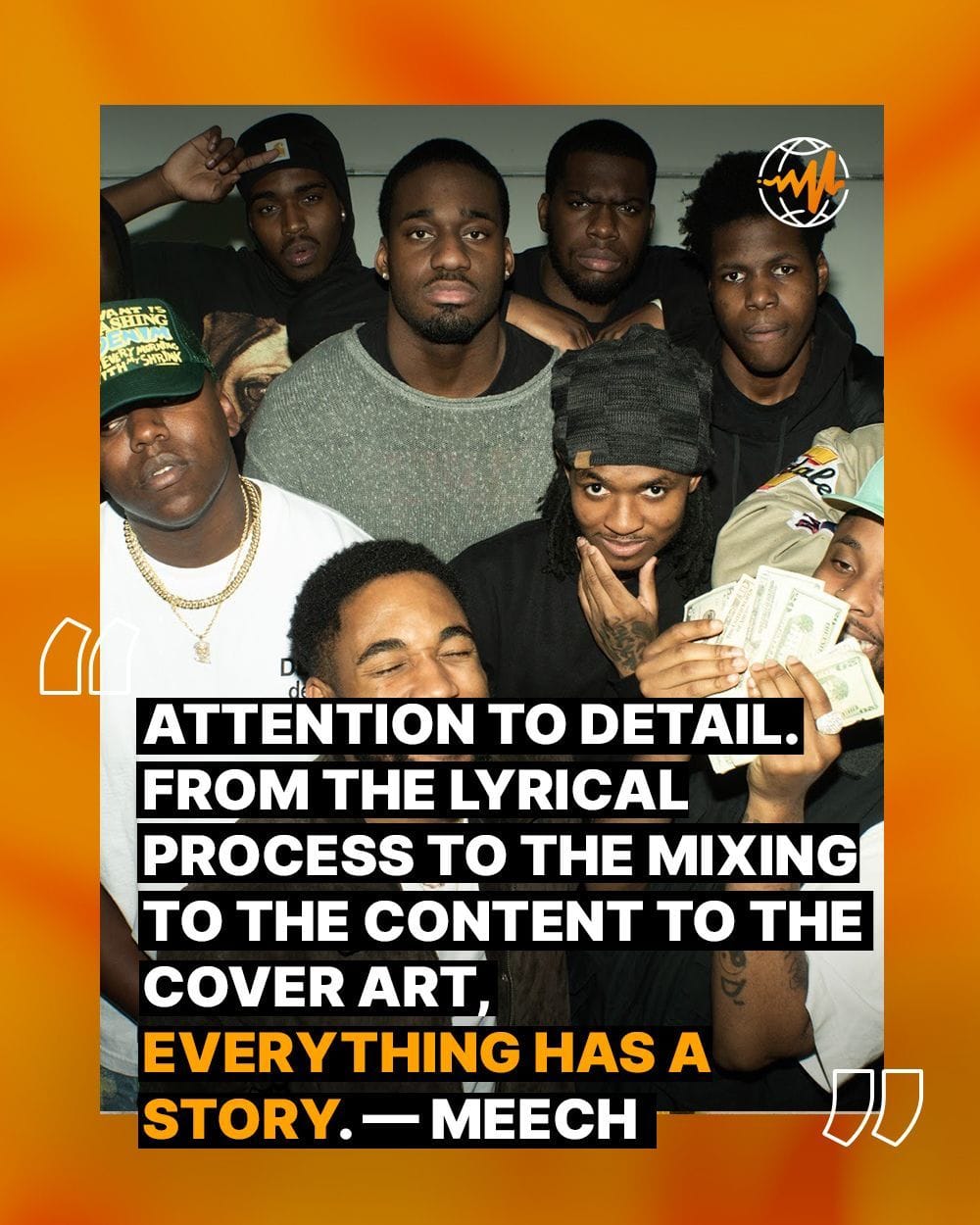 Tell me about the earliest memories you all have of bonding over music.

Luke Bar$: It all started at the SoundLab. I like to describe it as the YMCA for music back in the day. We’d throw little events, and [Brockton, MA] would just pop out. There was this one show over winter break, and we brought out 200 people. That was the first time we did a big show in front of a bunch of people.

After that, we transitioned to [Latrell James’] studio. We’d be in there once a week cooking up and cracking jokes. That’s what really built the brotherhood. I wasn’t a part of Van Buren at the time, but they already had something there. There were seeds being planted for years, and recently we were all just like, “Fuck it, let’s just do it.”

Lord Felix: Latrell’s studio was a hub for a lot of the younger Brockton artists back in the day. Sometimes we wouldn’t even record; we’d just chill and crack jokes, all that shit. That’s how we all just connected over music.

Meech: I’ll never forget when the [Pusha T] and Drake beef happened, and we were in Latrell’s studio listening to “I’m Upset” and then being like, “Oh shit, Push responded!” So many situations.

I’ve been thinking about the part of “Gangbanger [Remix]” where SAINT LYOR calls Van Buren a “coup d’état.” Could you elaborate a bit on that?

SAINT LYOR: You see this group of young Black men who believe in something and transform their lives. For me personally, with the way this industry works, seeing a bunch of white faces, and having to learn how to navigate those spaces, you have to learn how to change who you are just a little bit to get where you need to be. At that time, I was frustrated with that process. I just wanted to embrace the fact that we wanna take shit over. I’m tired of the boundaries and politics artists have to go through to be successful. I just wanna overstep that, and Van Buren is the best way to do that.

Van Buren has managed to sustain a fairly DIY vibe since its inception. What’s been the most fulfilling part of keeping your very tight-knit circle independent?

Ricky: The freedom to create is the best part of being independent. We don’t have to cater to anybody. There’s no specific thing we gotta do for a certain situation. If we wanna create music and drop it the next day, we can do that. Because we have that implemented in our head, it gives us the freedom to make the best art and be unapologetic about it. Going that independent route is trying to reinvent the idea of being yourself and pushing the ideas you want, and not having to answer to anybody.

Meech: From my own individual work to when we do VB collective work, it’s like two different worlds. The freedom is so relieving because we’re in a time now where everybody playlisting that makes for quick consumption before it’s on to the next thing. The art is what matters at the end of the day, so if it’s called for, you might have five or six guys rap on a record or two people on a hook. Whatever’s asked for, that’s what we do. That’s something that people aren’t really doing right now; most are bending or breaking to whatever the algorithm determines is hot. 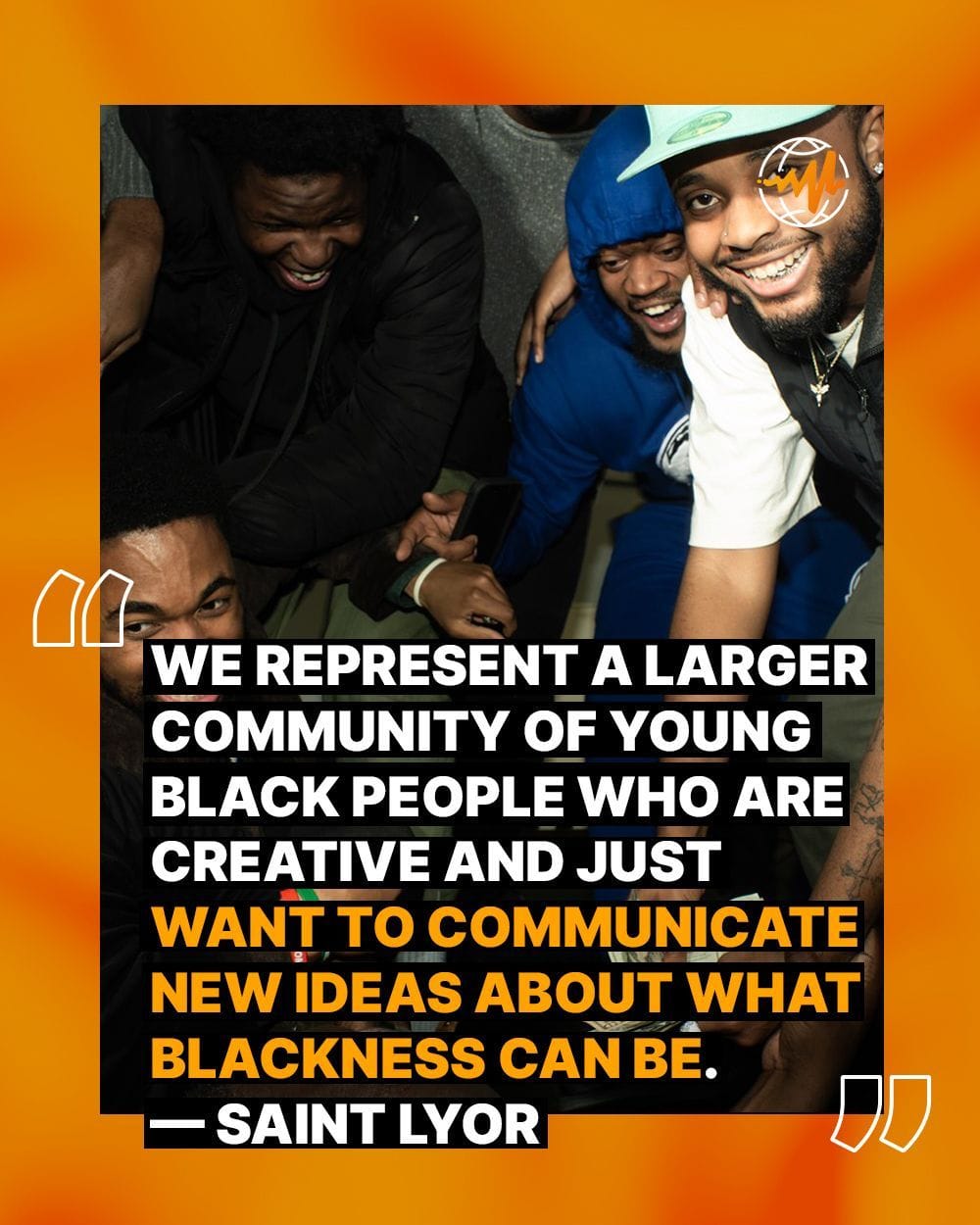 Bad For Press is your first full-length album released as a collective. I’m interested in what you mean by the title.

Ricky: Bad For Press is the idea of [a group of] Black men being like we all have said, unapologetic. When we say things, a lot of times, we tend to rub [people the wrong way].

Felix: We be abrasive.

Ricky: Yeah, we’re definitely abrasive with the things we be saying. I feel like with the way we talk about things, we be bad for press sometimes. It may not always be the best way, but it’s our way.

Luke: If you spend a day with us, we’re very controversial guys. We say and do a lot of crazy things, and people look at us like, “Yo, what’s good with these niggas? These niggas shouldn’t be saying things like that.” Even in this interview, you can tell we’re ourselves. We don’t give a fuck about none of that weird shit. That title really represents what Van Buren is. Whatever’s in our heart, we just let it out type shit.

As Massachusetts natives, how do you feel your home state has been represented within rap?

Luke: Brockton hasn’t really had a big rapper represent before. Back in the day, if niggas found out you were making music, you were getting cooked. Niggas would laugh at you.

Felix: No bullshit. Brockton is a sports town. Basketball, football.

Luke: Rap was forbidden. I’m just kinda watching it switch over now, and that’s beautiful because I know we had something to do with that. You see more artists coming out, painters and all that. It’s evolving into something of an art city right now. Five years ago, it wasn’t that.

Jiles: We put that battery in motherfuckers’ backs.

Felix: It’s so hard to find any type of studio growing up, especially if you don’t got no type of bread. The SoundLab definitely helped boost the music scene. I was traveling an hour and 40 minutes just to go to the studio before that. Latrell was also a big hand in that, so shout out to him.

What does Van Buren have to say about Massachusetts that no other artist from this state has before?

Luke: No cap, we made being yourself cool again. We get real deep and personal about our lives on all of our albums. Not to say that niggas wasn’t doing that before, but it wasn’t as common out here. We’re not changing who we are because of an interview; I’m gonna be Luke no matter that.

Jiles: Before us, a lot of people were just dropping videos and not marketing them well. We’ll do trailers, videos, interviews, and take the whole thing serious. You need people to want to fuck with your music. We created a blueprint to show people that if you market yourself right, and don’t post your cover art at 10 p.m. when no one’s on Instagram like that, you could get a little more traction.

Meech: The big thing with VB is the attention to detail. From the lyrical process to the mixing to the content to the cover art, everything has a story. To this day, I’ll still see reposts of our songs from two or three years ago on a random Tuesday. There’s a connection because we’re all trying to find answers, too. We’re students of the game—that J. Cole, Asher Roth, Charles Hamilton, Kendrick Lamar era had everyone giving you their story. It was so pivotal to someone like me, who was a basketball player, being able to feel Friday Night Lights on a different level. I want the same to happen for people around here. Brockton needs it. Massachusetts needs it.

LYOR: We represent a larger community of young Black people who are creative and just want to communicate new ideas about what Blackness can be. We’re expanding the spectrum. Like Jiles said, we’ve got a lotta different personalities in this group between street niggas and weirdos. We’re all able to coexist with each other and still see each other as Black. There’s no requirement or accusations of “not being Black enough.” It’s all one thing, and it’s part of a larger agenda to push community and togetherness, regardless of our background. We can still exist and be united.