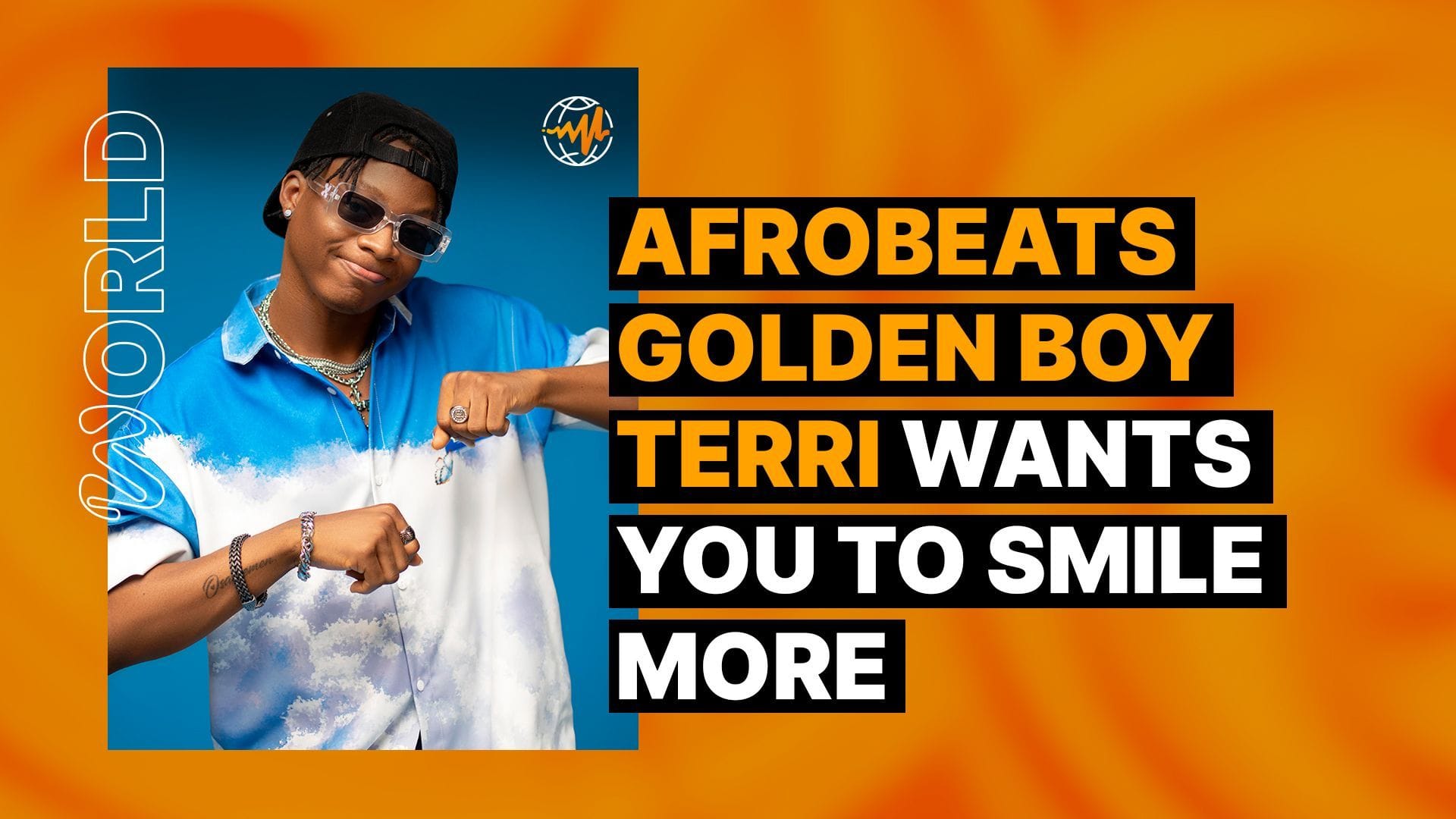 Charming smiles have been used to disarm the toughest of crowds, and for 21-year-old Terri, the perpetual smile on his face tells you everything is right in his world. When he tagged Wizkid on a cover of “Oshe” he posted to Instagram in December 2017, little did he know he would be acknowledged by the Nigerian superstar, and soon after become the first artist signed under his idol’s Starboy label.

The weight of being Wizkid’s first signee comes with lofty expectations, but Terri stays resilient, both for himself and his listeners. “I want my music to be the source of peoples’ inspiration, to smile and get their energy up,” he says.

It wasn’t long before Terri made his mark with a performance on “Soco,” a Starboy crew collab and arguably the biggest Afrobeats song of 2018. Two years of singles followed before Terri unveiled his highly anticipated debut, the seven-track Afro Series, in April 2020. Met with acclaim, the project set the stage for another milestone feature a few months later on “Roma,” from Wizkid’s blockbuster Made In Lagos album.

Romance is a recurring theme in Terri’s music, from his debut single “Bia,” where he beckoned to a love interest in her native tongue, to his biggest solo song, “Ojoro,” which bounces with words of adoration and melodies reminiscent of Wizkid’s Superstar era.

Being labeled a prodigy at the outset of your career sets the bar high. Terri has proven he’s up to the task of being an Afrobeats star, and his latest release, “Come Around,” is proof that he’s growing as an artist. Through it all, he remains focused on spreading positive energy as far as he can. 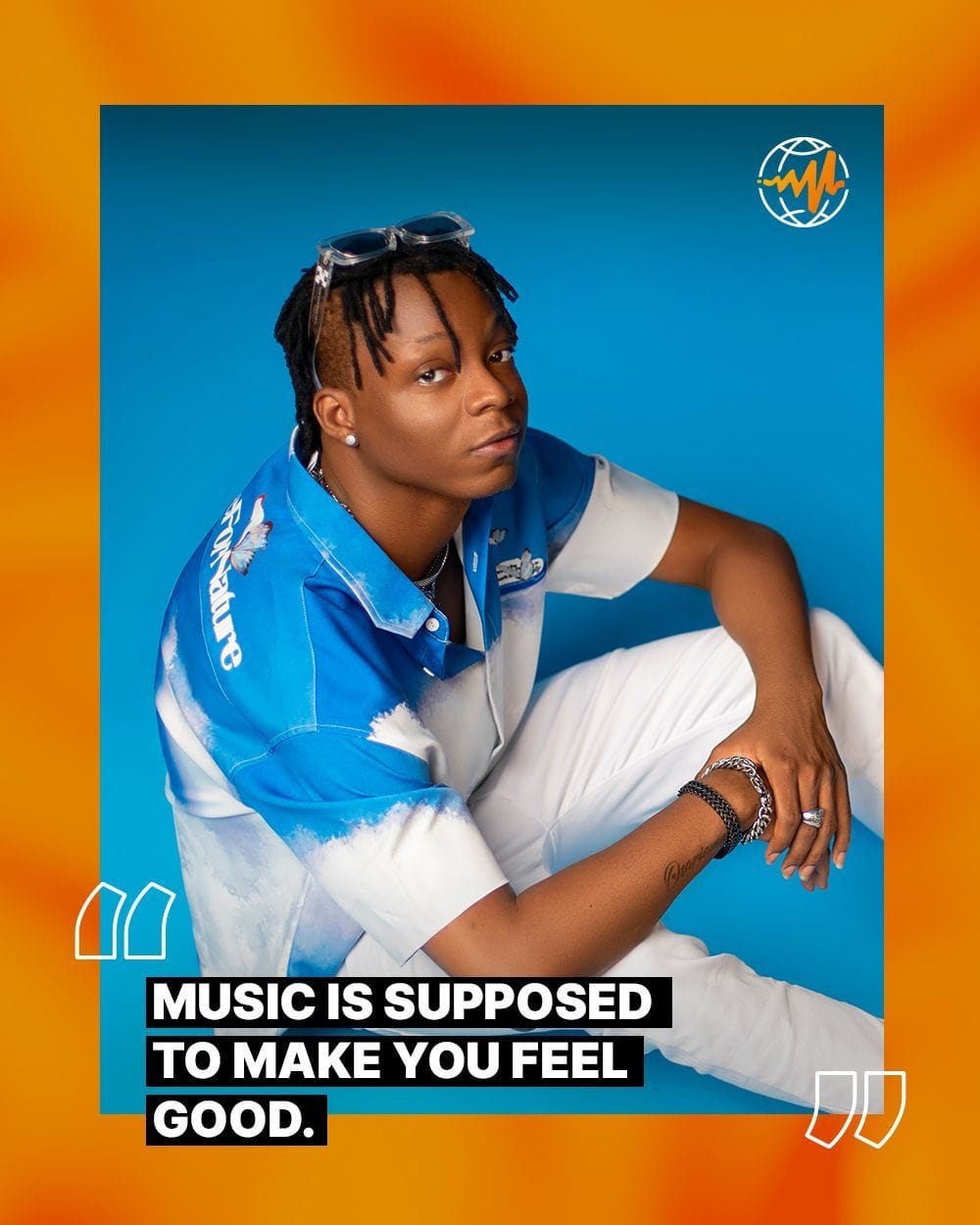 What was your first encounter with the process of creating music?

I recorded my first song when I was 15. It was a great session. It came from struggles and it felt like a once-in-a-lifetime experience. It took a lot to be able to record that [session] in terms of money. So the whole journey of getting the money and how we finally got there was really a cruise for me. And then finally getting to record for the first time, it was vibes. That was the song that put me on in my environment then, my family, my friends, schoolmates, hood friends, church friends, and everyone else.

Was this when you were sure you wanted to pursue a career in music?

I used to sing a lot already in school, in church, and around where I lived. So I got encouragement from people saying, “You actually should do this.” People [treated] me like a star already. I just knew that this is it, and when I made my first song, I had even more right to make more songs because people loved it and they wanted more. I had to do that, then from wanting to satisfy people to actually saying this is what I want to do for a long time, and seeing a career in it.

Signing as the first artist under Wizkid’s Starboy label, did you feel like you had big shoes to fill?

Yes, ‘cause the label is one of the biggest out here so I definitely felt like I had a lot to do, but I also felt covered because people around me motivated me. It started on a good note, and so it has been ever since. There are people that have come out, young people around my age, that are doing great things. It’s quite obvious that we actually can [succeed], so why not?

What do you want people to think about when they hear Terri?

Pure vibes. Afrobeats at its purest, at its finest, most positive. I want my music to be the source of peoples’ inspiration, to smile and get their energy up.

In the long run, that’s what I’m working on, ‘cause I want that to also appear in the way I look and give off that energy of young [and] vibrant. I look back on everybody that’s been here, and I’m trying to do mine, trying to infuse me into it, in my style, in my music, and everything, and the rest is so help me God. 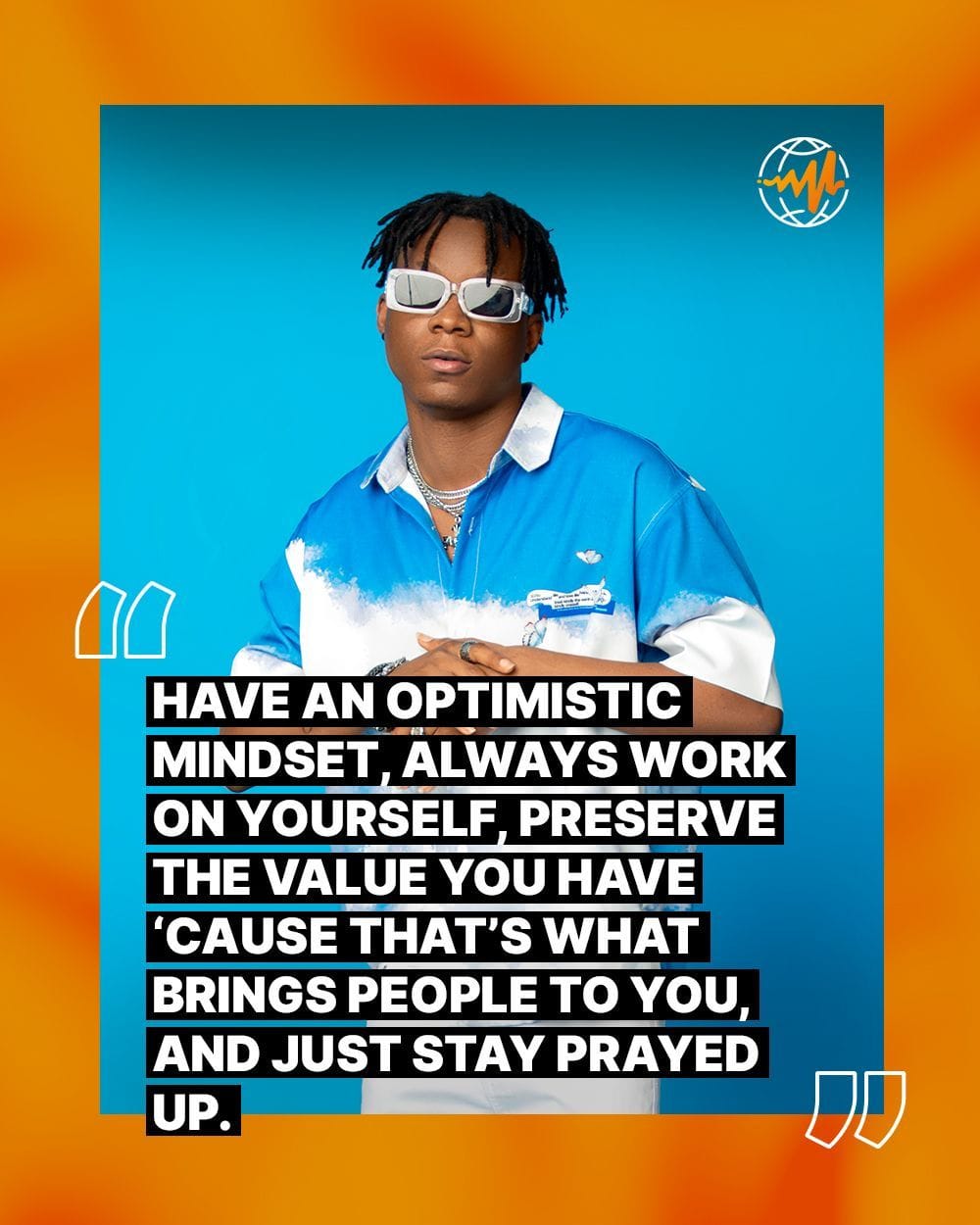 You’ve had two heavyweight collaborations with Wizkid on “Soco” and “Roma.” How were those experiences for you?

They were great, and it was sort of challenging ‘cause most of the time I didn’t know how to be or how to react to certain stuff. It was new to me on the highest level, a level where you had to be disciplined in what you wanted to do. It was a great feeling to have friends and family rate you that high.

It was also a time in the industry when there [are] young artists coming out. It was like a relatable force to see there’s still more to be unveiled from that so keep the fire burning.

How would you describe your artistic and personal growth over the last three years being part of the industry?

2020 was really not the year, but between 2019 to 2020, I experienced a lot of personal growth. My artistic growth, I’ve grown in my sound over time, working with a lot of people. Right now, I’m in a state where I know what I want, the direction, what I sound like. I already have an outlook of what I want and it’s easier now to say this is what I want to do and do it.

As a person, I’ve met a lot of people. I’ve had to adjust to a lot of things. It definitely reflects on the way I deal with stuff, the way I deal with people, but at the end of the day, it’s my same principles: respect and family. I do the best I can at everything, and I just vibe.

Tell me about that period between 2019 to 2020 where you feel like you experienced a lot of growth?

It was in 2020 actually, just last year when I dropped my tape. That was a new beginning for me and my journey. That was great for me and that was like the start of something. I had a big song on that tape, “Ojoro,” and coupled with everything I’d done before, people could put it together and be like, “Oh, this dude is fire!”

How do you intend for your music to connect with listeners?

Was your mental space recording your latest single, “Come Around,” different from any other time prior?

I’d say I’ve been trying to make music in different ways now, and “Come Around” is not the definition of where the sound is going; it’s to give you an idea of what’s coming.

You’re not the first person that’s saying they noticed the growth. That’s how music should be I guess. You should notice the growth. You should see the [difference] from the last time to this time. Even after subsequent projects, I’m still going to experience growth because if I stay in the studio I’ll get used to what I can do, and own it, and control it. 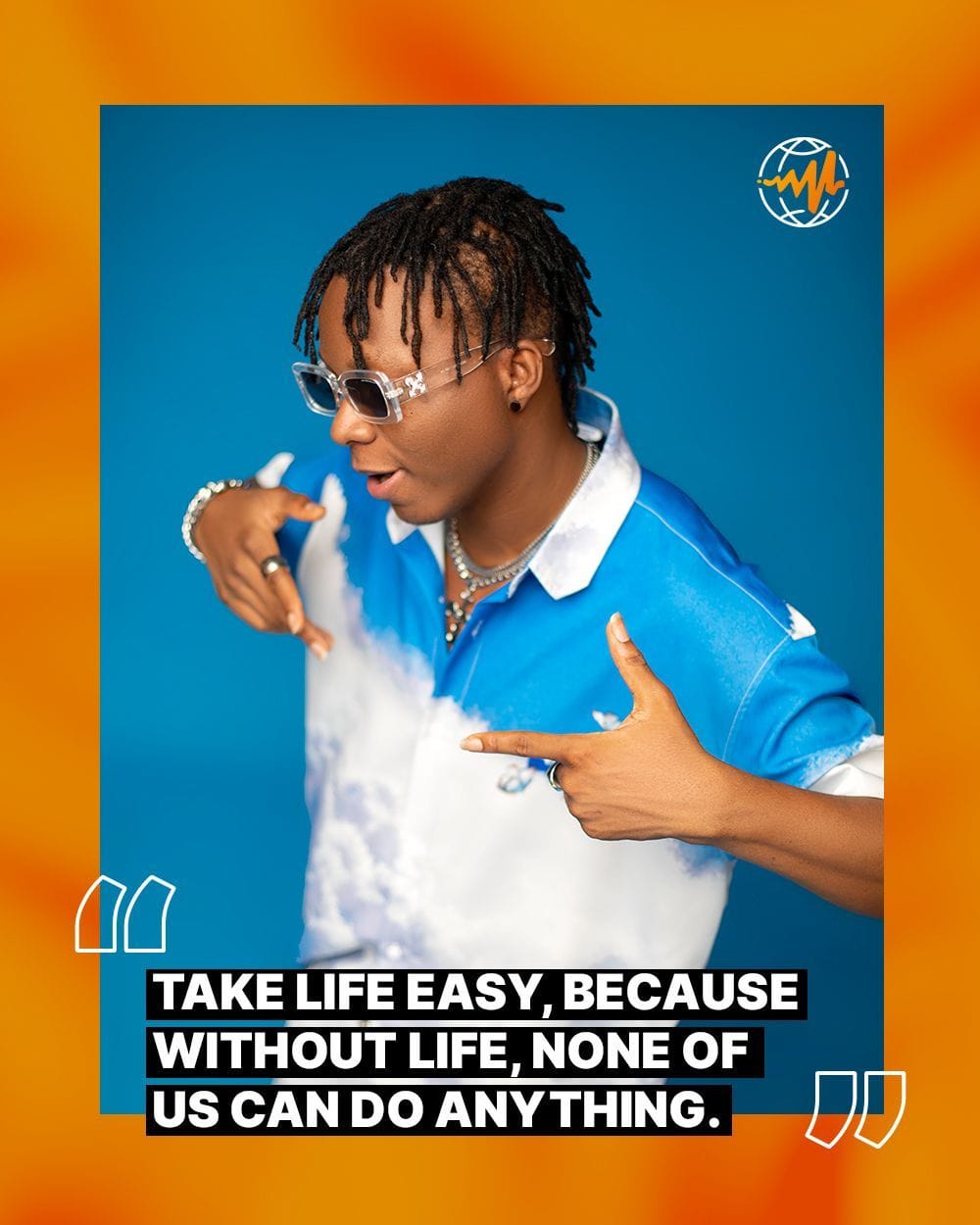 How are you adapting to this new normal?

The only thing I can say affects me is connecting with people—how you can’t travel to some places, and you can’t do some shows of certain capacities. That’s the only thing, ‘cause I’m almost always isolated, so it’s not so much different for me. I’ve been making a lot of music and I’m looking at putting a project together this year.

Do you have any tips for artists your age or younger trying to blossom as artists?

Believe in yourself. A lot of the stuff people say you have to do is not easy, and believing in yourself is not easy as well. Have an optimistic mindset, always work on yourself, preserve the value you have ‘cause that’s what brings people to you, and just stay prayed up. Also take life easy, because without life, none of us can do anything. And yes, you probably should smile more.