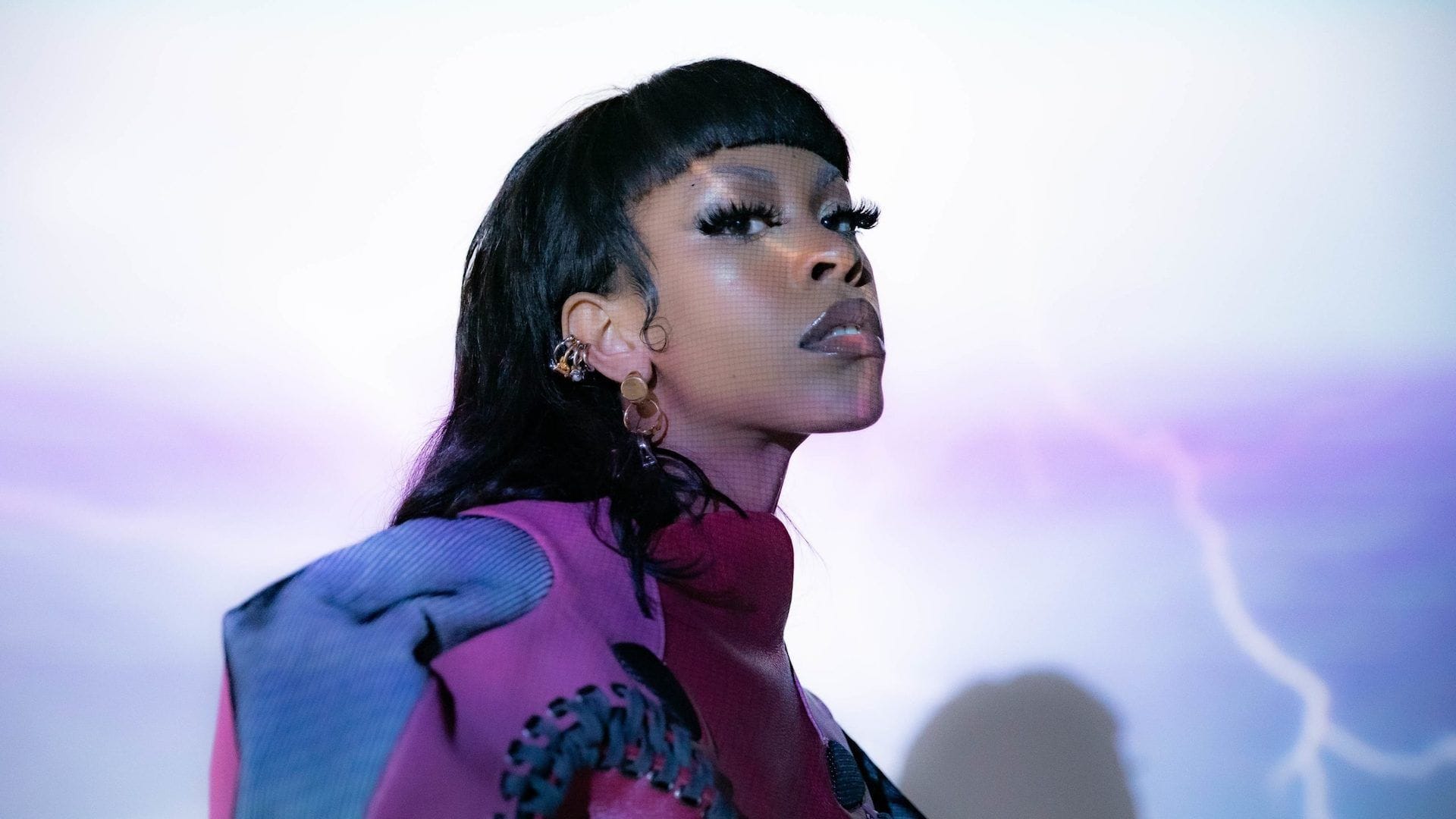 If you want to understand the DMV’s Rico Nasty, her debut album opener “Candy” sums it up: “On a dark and stormy night, I don’t blend in. Bitch I shine bright!” After solidifying her own lane with acclaimed mixtapes—2017’s Sugar Trap 2, 2018’s Nasty, and 2019’s Anger Management—rap’s badass lets her freak flag fly on Nightmare Vacation.

Out today via Atlantic Records and Sugar Trap, Nightmare Vacation fuses Rico’s punk mentality (“Smack A Bitch”) with experimental sounds (100 Gecs-produced hyperpop single “IPHONE”). When speaking over Zoom, it’s clear Rico’s excited. But like many artists during this year, she’s had to navigate her own doldrums. Along with teaching her son about exotic animals like flamingos and cooking dishes like alfredo pasta and crab fries, she’s also felt stress.

“My music has never been liked by the masses. I’m not a mainstream artist,” Rico says. “Because of the coronavirus, I felt pressure of, ‘If this album doesn’t do good, I’d probably be broke.’ Not, ‘I’m going to be super famous, tour the world, and be the next Nicki Minaj.’”

For Nightmare Vacation, rather than relying on frequent collaborator Kenny Beats (the pair worked together on Anger Management), the rapper forced herself outside her comfort zone to sing laid-back coos on the Aminé-assisted “Back & Forth” or flip childhood innocence into pissed-off fury on “Girl Scouts.” She travels through various lanes across the album, owning them all.

Without question, Rico Nasty takes pride in her idiosyncrasy, and she doesn’t plan to water it down to please radio. While rapping is her dream, it’s also part of her livelihood.

When people hear “Let It Out” from the album, they’ll want to break shit and get stuff off their chest.

I don’t know why as humans, we look down on those moments where you’re screaming into your pillow, or you punch a hole in a wall. It’s okay for it to be too much. Since I got in the game, I never felt welcome. I didn’t get the red carpet rolled out or had legends give me a co-sign. Don’t nobody understand what the fuck I’m doing, nor have they ever seen it before, so they look at me crazy.

If I did anything other than me, y’all would smell that shit on me, bro. Just like when y’all know when these bitches be fake gangster. But I’m not gonna lie; sometimes I do feel lonely. On [“Let It Out”] I said, “Bitches throwing shade, punch them in their mouth.” People always got something to say when you’re not doing what everybody else is doing. 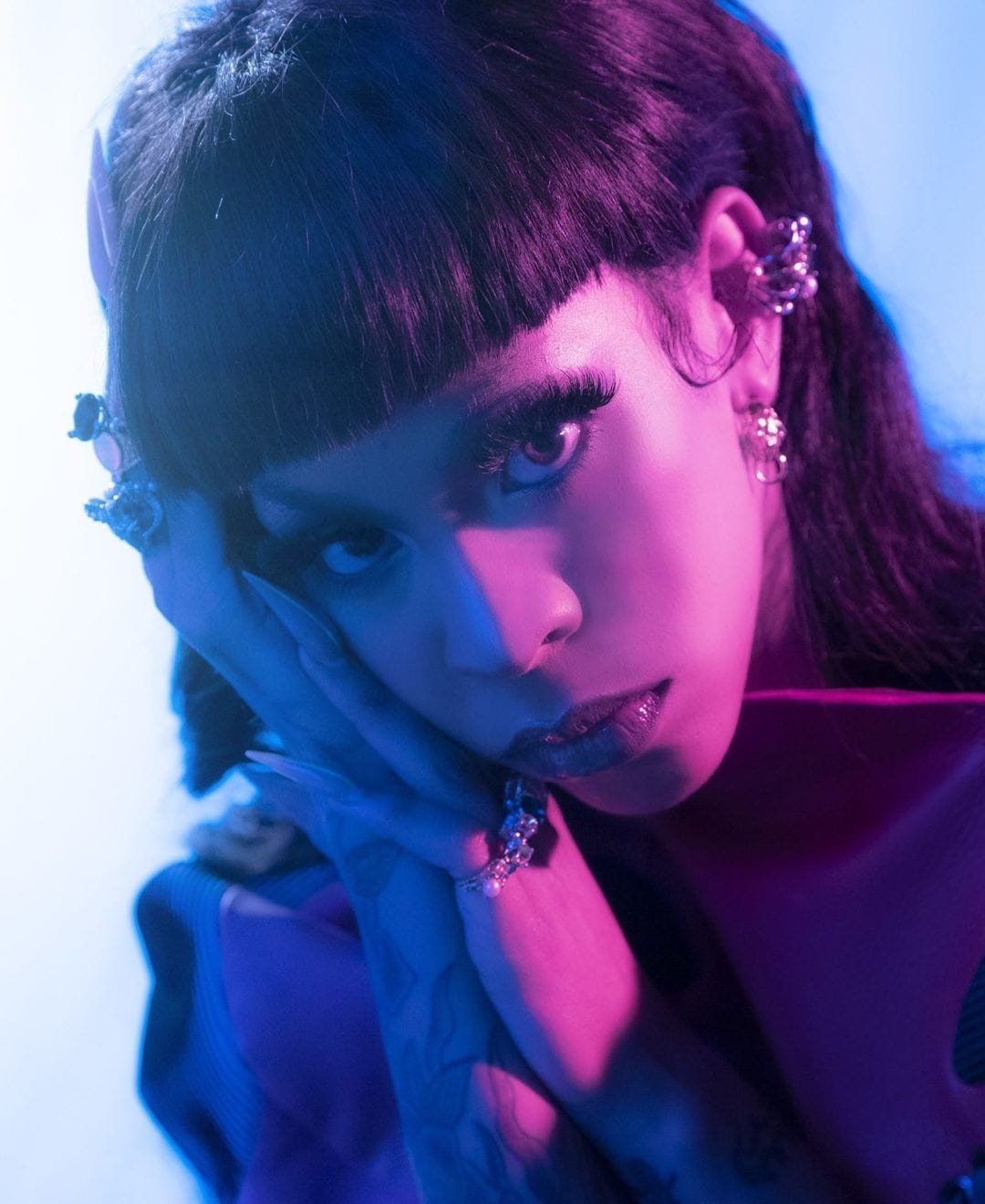 Have you ever watched The Craft? This album embodies the scene where Nancy says, “We are the weirdos, Mister.”

The Craft is actually my favorite movie. I auditioned to be in the [reboot]. We would’ve killed that. I love Nancy though, that’s literally who I am. Everyone is so fucking afraid of me, and it’s so stupid. I’m just a girl. I change my hair a lot. Why is that so scary to y’all? There’s people getting killed in broad daylight, and y’all are scared of me?

We’re so used to seeing the alt-girl aesthetic with white rockers. With a Black woman, it’s immediately questioned.

Being a Black woman in the industry is bad enough. With the generation I speak for, we make our own rules. If those rules don’t cater to you, you don’t have to follow. There’s power in being upset. Why are y’all so afraid of a little Black rage? I feel like we could start a tornado or some shit.

You are inspiring this new generation of misfits, even with how they dress.

I have three closets: one for Rico Nasty, Taco Bella, and Sugar Trap. So if I wanted to dress in a certain aesthetic, I just go to that closet like a superhero. My biggest style icons are Tyler, the Creator, Rihanna, Lady Gaga, and people that have worn shit that makes you go, “What?” With [Gaga’s] meat dress, I always wanted to know what it felt like to just get out the car and see the look on their faces. That’s how I feel wearing spikes. It helps me not feel so insecure because I can clearly see how insecure other people were reacting.

Speaking of Rihanna, you were in October’s Savage x Fenty show.

The lingerie shit is probably the most unexpected, only because I’ve never seen myself as a sexy woman. That’s such a weird word, like eww. But when Rihanna says, “I want to send you free lingerie because I think you’re sexy,” you just gotta forget all that other shit! All of these things I’ve decided to partner with, even with [my makeup collaboration with Il Makiage], they’ve helped me with my insides.

When I get my Savage x Fenty packages, and I sit with my girlfriends, and we come up with backdrops for the shoot, I feel sexy and intelligent. The ability to change how I look with makeup at any moment has always been a huge part of my career. We’re in the industry—people are fucking gorgeous. But I don’t ever want to change my face.

When you go on Instagram, it’s the same face, the same body.

As a woman, it feels so shitty not looking like everybody else. I don’t have big titties or big hips. You’re constantly yearning to look like a woman because you’re in this industry. I remember the day I met Kash Doll; I literally made my boob consultation the day after. I [thought], “Why do I look like a fucking child? When is this gonna stop?” I make this rowdy powerful music, at least build me like a superhero.

But you don’t always have to be strong.

Do you think you’re the odd one out?

The ass, the titties, the lips. Even their eyes are winged. It makes me feel like the weakest link sometimes, if I’m being honest. But that’s fine. I’m the only one out of them that can start a mosh pit, though. So you gotta find your peace in other things. Music and makeup saved my life. If I want to look like a fucking elf, Voldemort, or the bitch from Charlie and the Chocolate Factory, I can do whatever I want. At the end of the day, none of these bitches really know what I look like. Except for you because you’re seeing me without any makeup.

When I started, I was 18. I’m about to be 24. I want to be remembered as somebody who made people feel the closest thing to free. When you come to my show, and you bear it all, and you leave bruised up, and hair sweated out, that’s freedom as a woman. You never get to look angry or be mad and break shit without people judging. You never get to go outside and just... [starts yelling, “FUCKKKK!!!!”]

Society has taken away things that we would do to fucking get power as women. Now every claim to fame is, “You need a nigga to get there and take this nigga’s money.” No, bruh! Get your own money. Do your own shit.

Rage is actually very ladylike. Us women are so strong, and that’s why they try to keep taking away our power or try to make us think it’s in men. Because once we find out what’s in Pandora’s box, it’s a wrap.