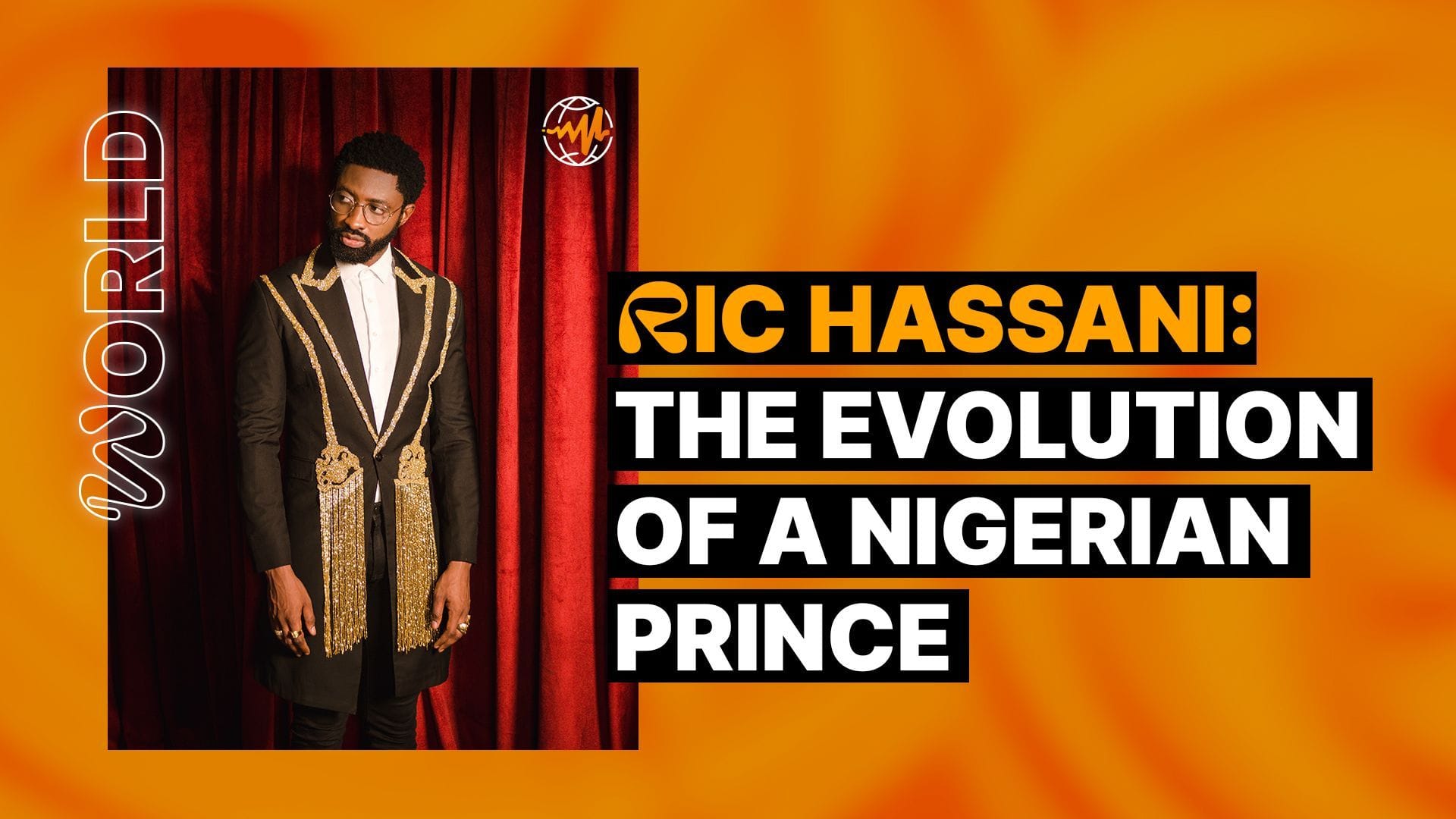 Ric Hassani knew he wanted to be famous before he knew what he wanted to be famous for. Years before his breakout single, “Gentleman,” introduced the world to an emotional wordsmith, Hassani, who grew up in a family with a legacy rooted in academia, escaped from his insular life by watching red carpet shows. Influenced by the hyperbolic nature of this world, the Port Harcourt-raised singer knew he wanted more.

With two albums and several awards to his name, Ric Hassani has undoubtedly found the fame he yearned for as a child. However, he is yet to decide whether or not he enjoys the constant leering: “I look at it as a currency and part of my job. It is a measuring tool to judge the impact of your work in some ways. It’s like the more famous I get, the more I know my music is spreading. That’s the only way I can find peace with it.”

The African Gentleman, Hassani’s independently released debut album, revealed the singer to be one of Nigeria’s most promising acts. His love for melodies and love itself is evident in songs like “Police” and “Marry You.” Possessing simple lyrics crafted with believable emotion, these songs pulled at the heartstrings of fans and critics alike. At a time when love songs gaining airplay seemed to be drenched in lubricious lyrics, his songs became a staple at weddings and in viral proposal clips. 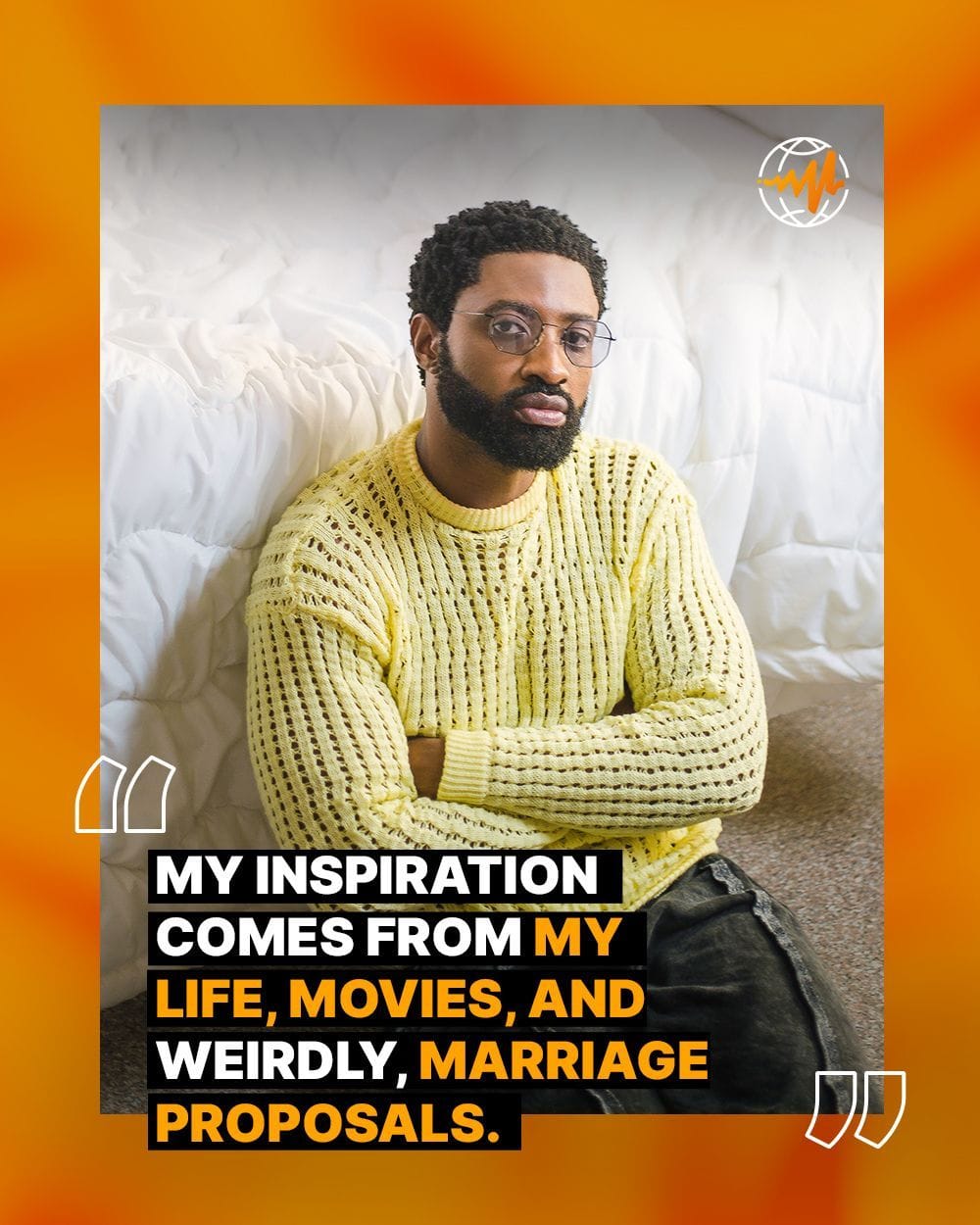 But to get to this point, Hassani had to let go of a lot of insecurities. A deep dive into the singer’s musical past leads to Rico Slim, his first iteration as an artist. Created in response to the “manly man” trope common among most male musicians at the time, his brief stint as a rapper is now an inside joke and a constant reminder of a failed attempt at concealing the sensitivity that has become the very ethos of his discography.

Now, four years since his debut album, Hassani’s artistic cadence has changed. His most recent single, “Thunder Fire You,” has come under fire for its cheeky lyrics, resulting in a sanction from the Nigerian Broadcasting Commission (NBC), which banned it from receiving radio airplay. On his new album, The Prince I Became, released in February, the singer is no longer lovestruck. Rather than singing about the emotion as a concept, there is a palpable feeling that love has been felt, held on to, lost, and eventually found again.

Lagos is Nigeria’s entertainment hub, with everyone moving to the city to chase their dreams. Tell us about your experience trying to start a career in the “Center of Excellence.”

It was very nasty because I was broke at the time. My family had taken their hands off because to them, the idea of being a musician seemed mad. I slept on studio floors for a long period because I was homeless. I have squatted in everyone’s house, from Ice Prince to Samklef and Clarence Peters. Then there were the record labels who didn’t know what to do with my “thin” voice, especially when hyper-masculine men like D’banj and Iynaya were the norm. No one wanted to sign me.

With all of this, why didn’t you just change your sound?

The truth is, I didn’t know how to do anything else. I don’t know how to make any other type of music. It’s just like how the only thing I make well is noodles and eggs, so if there’s a cooking competition that’s what I would make. I’m putting forward my sound and there are so many other sounds out there, so if you want something else, you can get that instead. 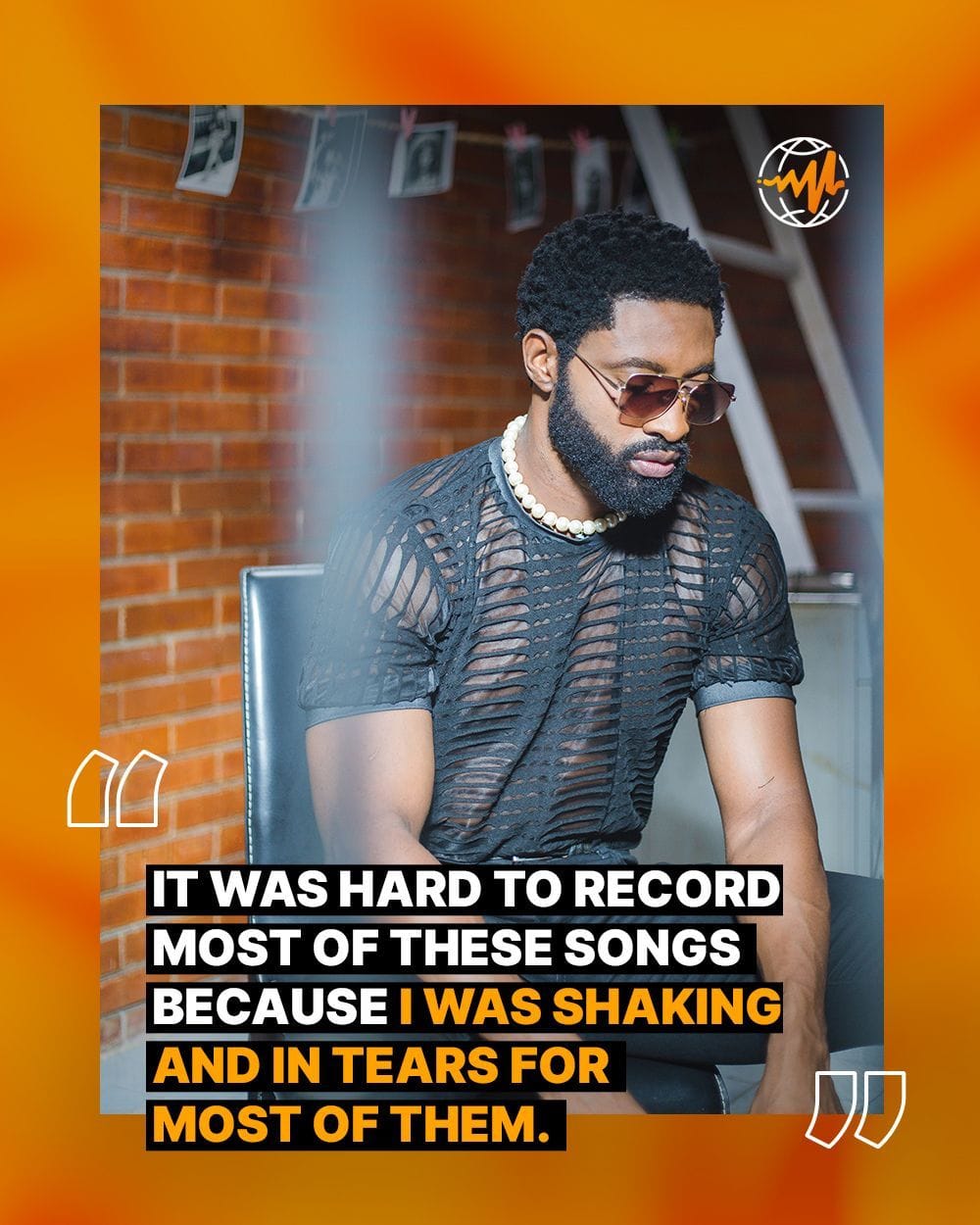 What inspires your songwriting process?

All my songs are personal. It’s either it has happened to me or I imagine it happened or I’m hoping it happens to me. My inspiration comes from my life, movies, and weirdly, marriage proposals. I literally go online and type things like “marriage proposals 2021” and I’ll watch videos for hours on end with a bowl of ice cream. It’s my guilty pleasure.

What about the creative process behind The Prince I Became?

I had started working on the album in 2019, but I had to pause to go on tour. I fully got back to the album in February 2020 just as the lockdown was about to start. The lockdown deeply affected me and the album because what we have now is an emotionally-heavy album which was far from what I set out to make. I’m singing songs like “When I’m Gone” or “Victory Belongs to Jesus” because I finally came out of depression. It was hard to record most of these songs because I was shaking and in tears for most of them. I wanted a light album and I was afraid people would hate the final work. There’s a deluxe version and I have collaborations with Perruzi, Reekado Banks, Ajebo Hustlers, and Waje.

This new album has you confronting your feelings and situations in a way your fans aren’t used to. What changed between your first album and now?

A few things happened to me that threatened my worth as a person and how I saw myself. I even tried to record music earlier but nothing was coming out of me. I was in a situation with someone where all I was getting was “You’re not good enough” and I felt like I needed to become assertive with who I am as a person. I am Ric Hassani and I am seriously talented. I really am. I used to feel bad about saying things like this because I didn’t want it to come across as “bragging,” but you have to acknowledge every extent of who you are as you go.

Your lead single, “Thunder Fire You,” was met with a lot of controversy. What inspired the song? And how do you feel about the mixed reception?

When I wrote this song, I was very angry. I didn’t plan on releasing it because I wasn’t in that hurt space anymore but my friend made me realize that it wasn’t about me anymore because a lot of people were and will always go through things like this. And while it might seem like I was angry at this person, the truth is, I was angry at myself. Because the real pain was how I could allow myself to go through the things I went through [in that relationship]. But now I’ve forgiven myself and moved on.

Seeing the government’s reaction was surprising. While I get that it’s quite harsh, I feel like it’s “understandable profanity.” There’s a lot more to that song than that line because it tells a deeper story. With the fans it has been mixed: for those who have followed my journey, they’re intrigued about the story behind it, and for those just discovering my work, it’s either they connect to how direct it is or they are taken aback by it. 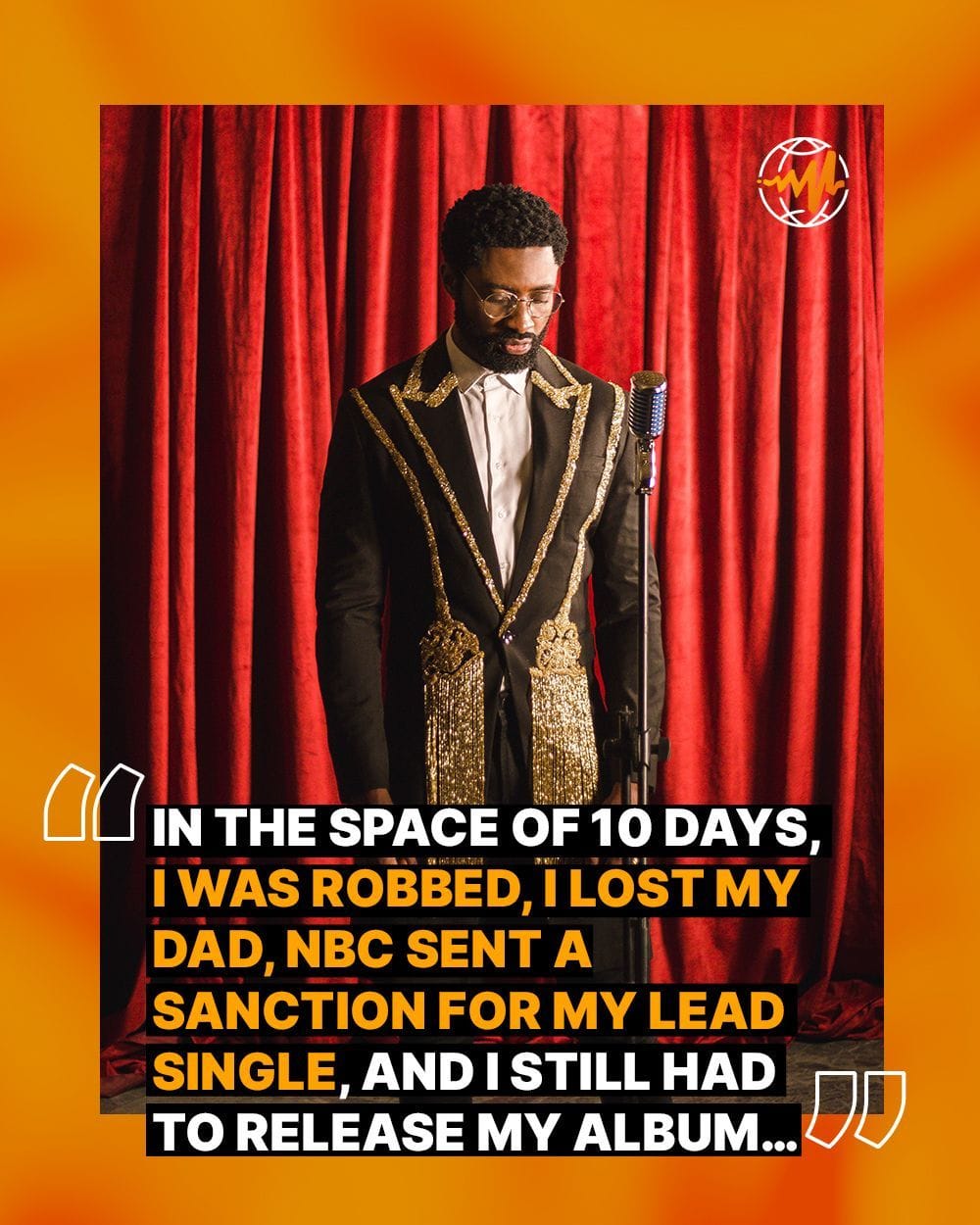 What did you learn about yourself making this album? And what are you grateful for now that you’re done?

I learned a lot about my strength. I had always felt like I was weak because of my insecurities. But once I started looking at them as part of what makes me who I am, things changed. This album made me look at myself in a different light. In the space of 10 days, I was robbed, I lost my dad, NBC sent a sanction for my lead single, and I still had to release my album as an independent artist. These things should break me, but, no, I’m still here.

With regards to gratitude, I am grateful for the most trivial-sounding things from my smile to my voice because these are the things that make me who I am.

What is the one thing about Ric Hassani you wish more people understood?

Every song I release comes from a real place of emotion. Honestly, I don’t see myself as a singer; I’m just someone who tries to share how he feels with other people. I want them to feel what I’m feeling at the exact moment I recorded the song. If I sing about looking for love, I want you to be in that place too. People want to be seen and that’s what I try to do with my music. I want them to know they’re not alone.