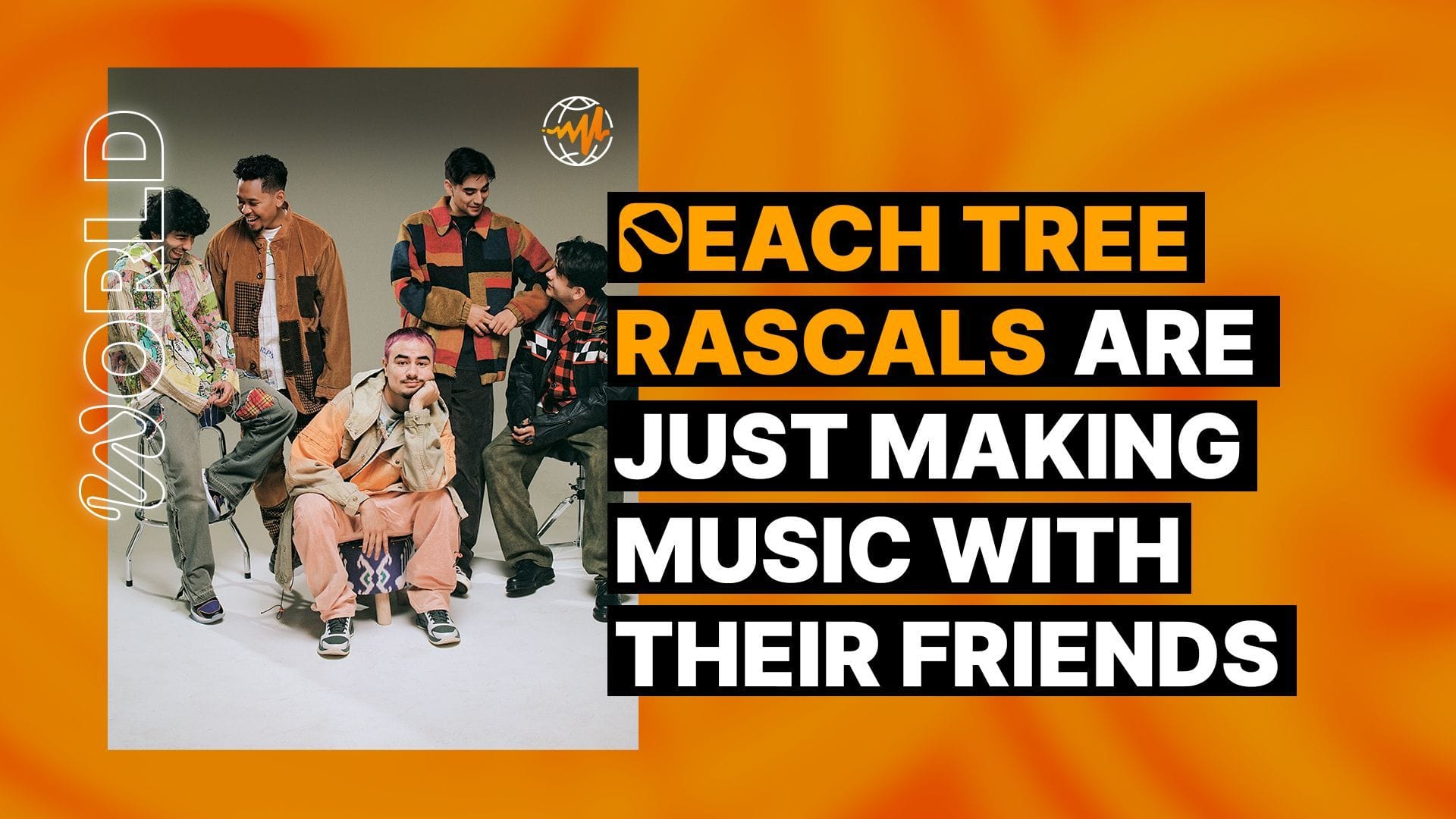 Although it’s clearly the 100th time they’ve told the story, Peach Tree Rascals—an eclectic five-person collective hailing from San Jose, CA—don’t seem to mind telling me about their come-up. They ping pong off one another in conversation, visibly excited to recount stories about dropping acid together, or about turning a garden shed into a makeshift studio, creating the impression that they’re a group of old friends, glad for any excuse to reminisce.

“We weren’t even thinking of creating a group,” says Dominic “Dom” Pizano (the collective’s producer) of their early recording sessions in this shed. “We were just making music with our friends.”

The story begins with Isaac Pech, one of the group’s three vocalists, making fast friends with the others after enrolling in their high school. A rapper who’d been putting out mixtapes since childhood, Isaac inspired the group’s other members—vocalists Tarrek Abdel-Khaliq and Joseph Barros—and the three of them, plus Dom, began working together regularly. The group’s fifth member, creative director Jorge Olazaba, came onboard early as a jack-of-all-trades creative, tasked with bringing each of their songs to life with sparkling visuals.

Things progressed incrementally from there. The group (all of whom are now 23, with the exception of Jorge, who’s 21) experimented with and discovered their undeniable sound: a cheerful cocktail that borrows elements from pop, R&B, indie rock, Motown, and rap. They released a new single and accompanying music video roughly every month, starting with 2018’s “Glide.” They moved into a house together in Los Angeles, so they could create around the clock. And they built a dedicated fanbase in the process. 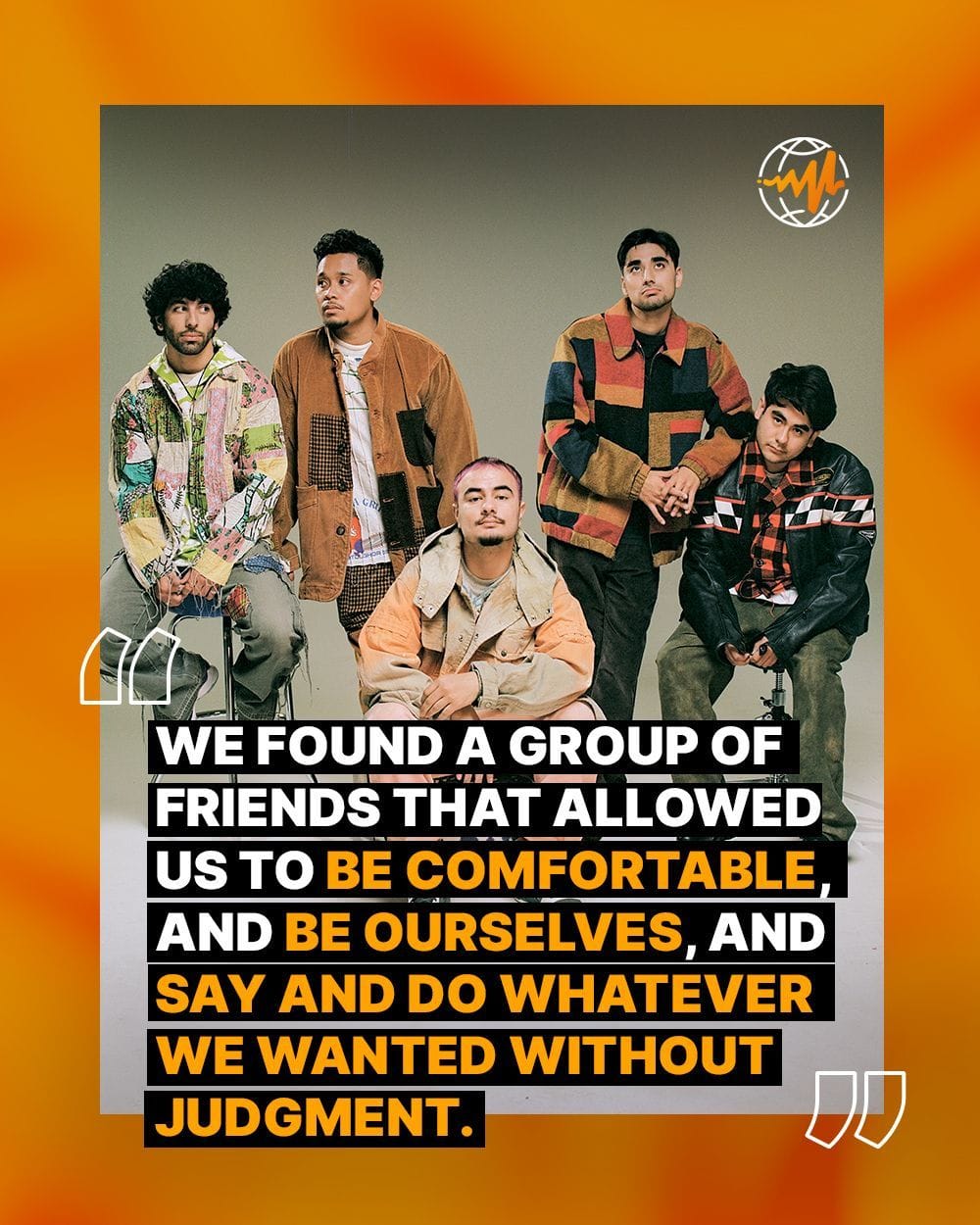 Now, buoyed by the success of their viral breakout, “Mariposa,” Peach Tree Rascals is finally ready to put out their first EP, Camp Nowhere, on March 26. The project is a natural extension of the Peach Tree Rascals brand: sunny, exuberant, and genre-agnostic, but richer, and bolstered by all the resources the collective didn’t have access to starting out. Best of all, it’s underpinned by the same sense of youthful camaraderie that’s characterized every Peach Tree Rascals song to date.

With the exception of Jorge, I know you all met in high school. What do you think the odds are of one particular high school being home to so much musical talent?

Tarrek: I think there’s potential anywhere, and there’s potential in everybody. Sometimes there are teachers, or other people around you, who make it hard to achieve your goals or to even see certain goals. But with us, we found a group of friends early that allowed us to be comfortable, and be ourselves, and say and do whatever we wanted without judgment. So we just kind of grew into a full creative thing.

Isaac: In a lot of cases, people aren’t privileged enough to have the opportunity to be able to work on music for six or seven hours a day, a few days per week, from ages 16 to 21, because they have to work. So, you can do it, but it takes a lot of sacrifice.

A lot of creative directors work behind the scenes, but you decided to bring Jorge on board as a permanent member of the group. When did you make that decision?

Tarrek: We knew even before our first song. We knew we wanted to incorporate a video with every song, because of the impact a video can have. And Jorge was one of the main reasons we were able to come up so early because his visuals were so good. They meshed with the music so well. He was able to bridge the gap between us having a sound, to us having a full aesthetic, a whole look and feel that people can connect with right away.

There’s a throwback vibe to a lot of your music, especially on the new EP. How far back do your influences go?

Joseph: I listen to everything: Frank Sinatra, The Beatles, The Carpenters, Jackson 5, Stevie Wonder. Everything. And Dom listens to a lot of jazz and Motown, too.

Dom: Yeah, I listen to a lot of the same shit: Frank Sinatra, The Beatles.

Tarrek: Their influences show through instrumentation, and through the overall feeling of a song. But, individually, we all have such different and wild tastes in music. And that’s where that genreless aspect of our music comes in, because we’ll start songs with a certain feeling, but based on what we all add individually, it can easily change into something else.

What about in terms of cultural influences? Between the five of you, you represent so many different cultures.

Isaac: They pop up subconsciously. I’m never in the studio, like, “Let me go back to my heritage,” or whatever. But funny enough, I’ve been doing that more recently. Like, I sang in Spanish recently, and Tarrek has been thinking about incorporating Arabic music, too. Those family functions you attend growing up, where you’re immersed in the culture, they come back up subconsciously whenever you’re doing what you’re doing.

Joseph: The newest single we dropped, “LEAVE ME,” was actually inspired by a Filipino song I used to listen to at family parties.

Because your music is so genre-agnostic, it’s hard to put a label on it. What’s the worst description of your music you’ve heard?

Isaac: “Urban”! Prior to signing to our label, we’d meet with random people from other labels, and they’d say things like, “We love the urban aspect of this.” And it’s just a rap verse from me, but it’s not really a rap song or an “urban” song. What the fuck? It’s fucking coded language. 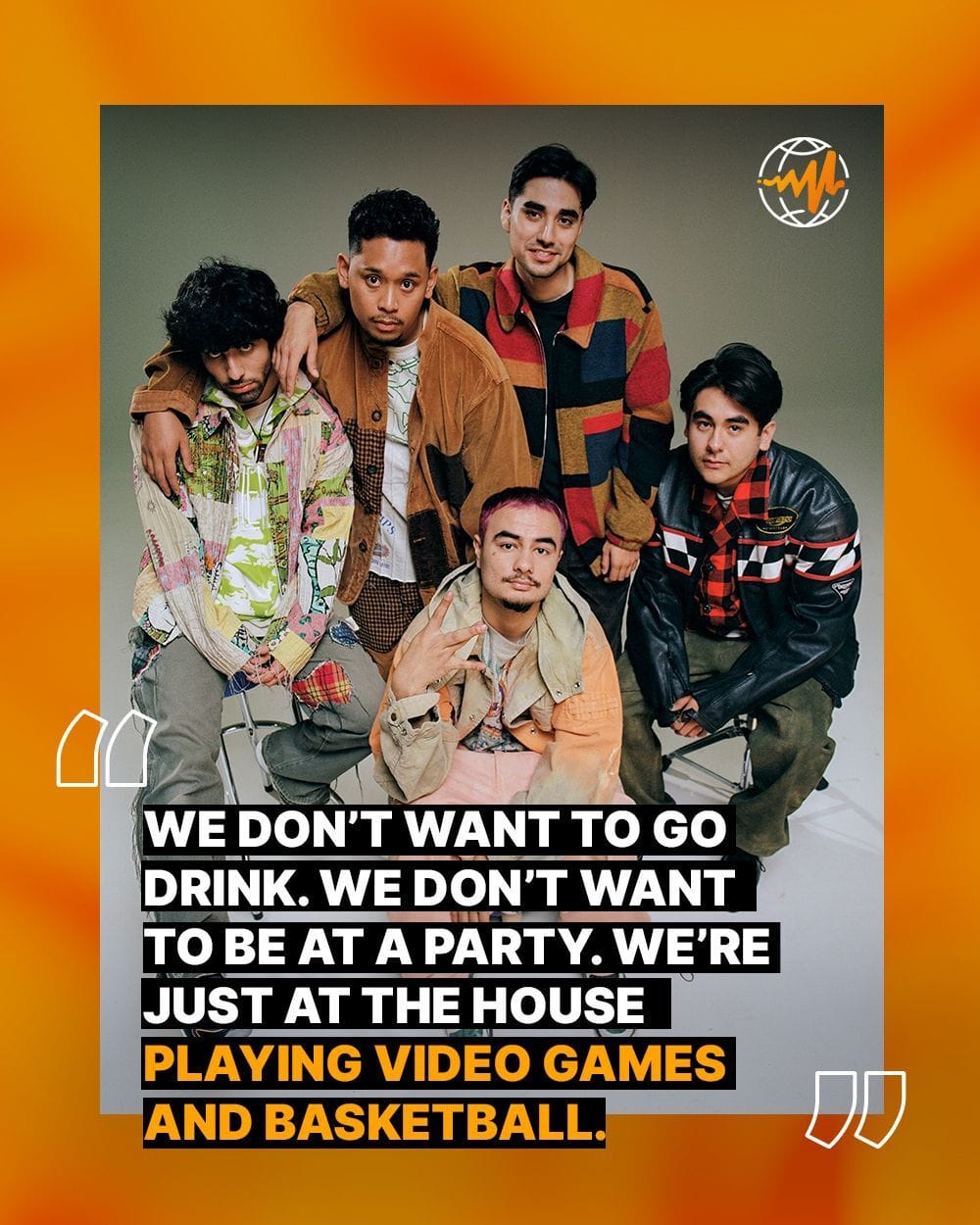 What does the writing process look like for a typical Peach Tree Rascals song?

Joseph: I tend to write songs on my guitar first. I have the bare bones of a song, and I show Dom, and we produce it, and then these guys start writing their own melodies. In other cases, Dom will start with the chords, and we’ll get the feeling from that, and we’ll start creating melodies to fit. Melodies and chords are most important, and lyrics always come after. I actually forget most things I write, and then they’ll resurface a couple months later in the studio with Dom.

Dom: I’ll hear it and be like, “We’re recording that shit right now!”

How do you navigate creative gridlock when two of you disagree on the direction of a song?

Tarrek: We fight until the death, and then we kiss and makeup, and we just go with it. We don’t usually fight, except about little stupid things. If anyone has a different idea for a song, we always try it out, and then we just go with whatever sounds better. And if we can't figure out what sounds better between two ideas, we just ask everybody, and then we make another decision. We try to communicate through any problems and try to handle [them] as smoothly as we can. Plus, we all smoke weed and shit, so we can’t really fight like that. We just be chilling.

It seems to be a point of emphasis for you to make sure your music maintains a happy and optimistic tone. But, the last year hasn’t been the most optimistic time in the world. How have you been keeping your music cheerful in the face of that?

Isaac: We’ve made plenty of sad songs, but most of the ones we’ve released have been on the more optimistic side. The way we describe it is “optimistically sad.” We’re all pretty reclusive, though. We don’t want to go hang out. We don’t want to go drink. We don’t want to be at a party. We’re just at the house playing video games and basketball. On a selfish note, the pandemic forced us to cancel a bunch of sessions and cancel our tour, but it allowed us to make more music, and now we’re ahead because of that.

Tarrek: I think that just comes from living with these guys, and having a good foundation, good base, and good team around you. And weed. We can be very optimistic and relaxed when certain things are going down. COVID was a really bad thing that put a lot of things on hold, but it wasn’t very different from the life we were living before. We’ve been in quarantine for the past three years.