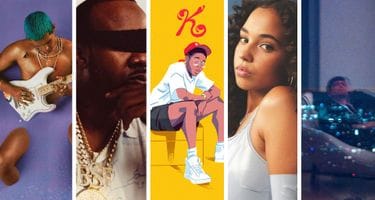 Apolonio is a creative breakthrough for Omar Apollo. The album makes good on the critical hype the Indiana native has received since his 2018 debut EP. Featuring Kali Uchis and Ruel along with contributions from DJ Dahi, Michael Uzowuru, Albert Hammond Jr. and more, the nine-track project bursts with sexuality and feeling. Mixing pop, soul, funk, indie rock, and R&B, and defined by Apollo’s identity as a first-generation Mexican-American, Apolonio is an eclectic statement from an artist hitting his stride by carving out his own distinct vision.

Benny The Butcher — Burden of Proof

“Last year was ‘bout brandin’, this one about expandin’,” Benny The Butcher raps to kick off his new album. The Griselda rapper’s first solo project since 2019’s The Plugs I’ve Met EP finds him fixated with legacy, made obvious by track names like “Timeless” and “Legend.” Burden of Proof was crafted with intention. It’s produced in full by Hit-Boy (who is having himself a career year) and features high-profile guest spots from Rick Ross, Lil Wayne, Big Sean, and Freddie Gibbs, while Benny dives further into his personal story than ever before, detailing struggles with asthma, the death of this brother, and the importance of family in addition to his vivid drug-dealing exploits.

Watch our episode of Beyond The Beat with Hit-Boy.

Kalisway’s second EP of the year cements her as one of Toronto’s most exciting rising artists. Special K is pure funk joy imbued with R&B melodies and hip-hop flavor. Kalisway’s voice remains addictive as it bounces around her vocal range. She shines as a producer as well, crafting a bright, sumptuous backdrop full of thick bass lines and neon synths.

María Isabel — Stuck In The Sky

“Back on a plane, two different coasts / When we’re alone, where does the love go?” María Isabel sings on the chorus of the second track to her new EP. The situation and ensuing uncertainty encapsulates the adrift nature of Stuck In The Sky, which tackles the up-and-downs of long-distance relationships across seven tracks of warm, tranquil R&B. The Queens native may be stuck, but most of us are too.

Read our feature interview: "María Isabel Was Born to Be a Singer"

James Blake returns to his roots with a new transportive EP, Before. Regarding the project, Blake said in a press release that he “finally [has the] confidence to put my own voice on dancefloor rhythms”. Across four tracks, the English singer-songwriter and producer adds his haunting, processed vocals to hypnotizing and uptempo house grooves. Too bad the clubs are closed.