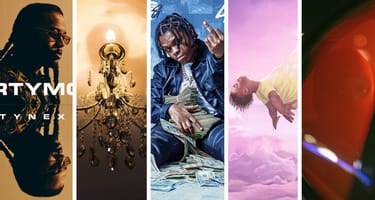 It’s been four long years since PARTYNEXTDOOR’s last full-length project, the third chapter in his eponymous trilogy. For PARTYMOBILE, his third studio album, intended as a soundtrack for late-night drives, he’s switched up the naming convention but the sound remain largely the same: a masterful blend of atmospheric R&B and dancehall-tinged pop.

Insomnia is a welcome surprise from grime legends Skepta and Chip, along with Young Adz from rising UK duo D-Block Europe. It’s a seamless cross-generational team-up as all three rappers meet in the middle of their respective styles to form a sum greater than its parts, Young Adz’ Auto-Tuned drone offsetting the veterans’ unflinching raps.

Fresh off a show-stealing appearance on Lil Baby’s My Turn, 42 Dugg has released the the sequel to last year’s Young & Turnt. A joint release between Baby’s 4 Pockets Full and Yo Gotti’s Collective Music Group, the Detroit rapper makes good on the investments from both industry heavyweights. Whether wrestling with the loss of friends or adjusting to the trappings of success, his nasally growl is full of emotion and passion.

Oxlade is carving a lane in the booming Nigerian music scene with his voice and ability to craft addictive hooks. The cover to his new EP, OXYGENE, shows him levitating to the heavens amongst the clouds, matching the music, which finds him floating over smooth, gentle production.

Clocking in at 13 minutes across eight tracks, THEBOOFMOBILE is a brief but focused introduction from explosive Pomona, CA rapper JAHMED. Inspired by West Coast aggression in the lineage of Ice Cube and Tupac, JAHMED makes music with an energy intended for riots and moshpits, blending technical precision, passionate flows, and a Kendrick Lamar-esque fondness for vocal effects.