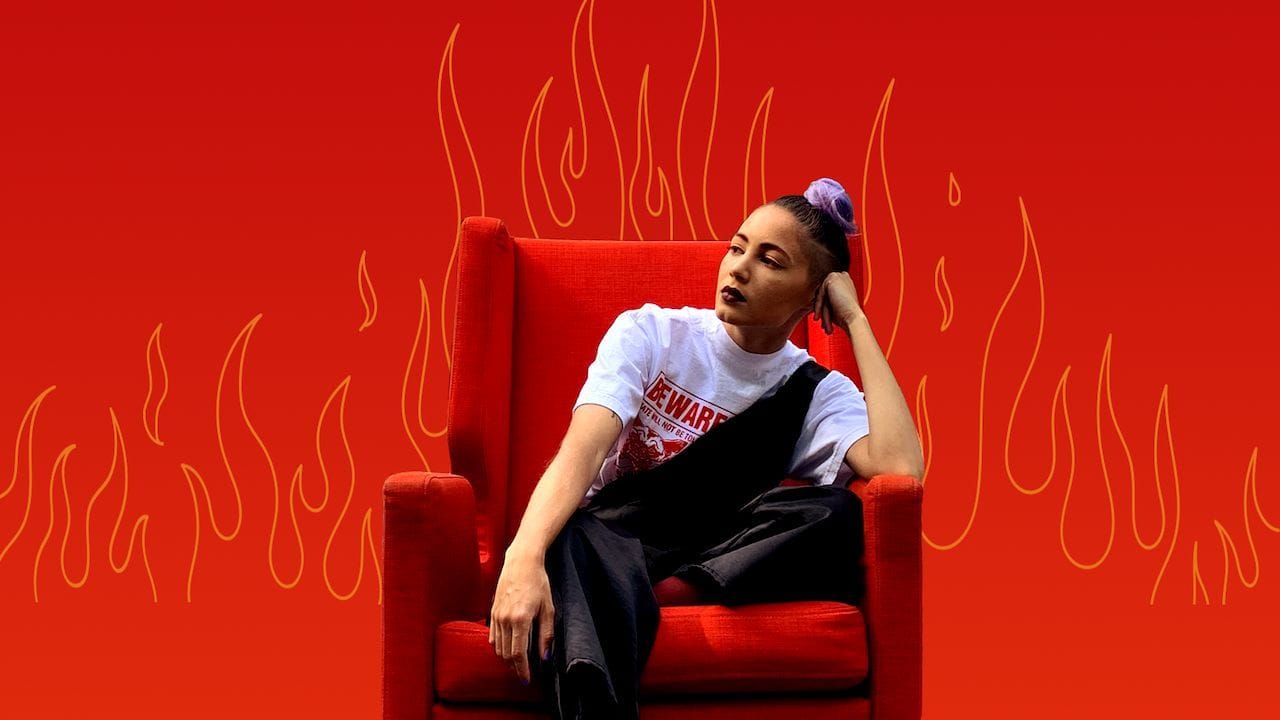 Ness Nite is from the future. At least, that’s what their artist bio suggests. Based in Minneapolis, the 24-year-old non-binary artist makes dreamy, glitchy, buzzing pop music with twinges of hip-hop and alternative sensibilities.

“Unusual” is the self-produced first taste from Ness’ upcoming project Killing Chiron, the follow-up to their 2018 debut Dream Girl. In a statement which came with the advance listen, Ness describes the single, released via POW Recordings, as “about victims of gender-based violence taking justice with our own hands.” In an era where we are centering our queer communities during America’s uprisings, “Unusual” slots into the canon of the moment, with ballooning synths that prove themselves timeless.

Ness Nite calls me up on a balmy July morning to discuss their new single, America’s uprisings, the Minneapolis art scene, and their best advice for well-meaning white folx.

I want to start by asking you about the Minneapolis creative scene. What’s something about your scene people don’t know?

Some people would argue differently, but I think everyone’s a lot closer than they realize. We’re able to have conversations that may not happen in other scenes, just because of how small we are.

We’re in the process of transformation in so many different ways here, because of the uprisings bringing out other issues in the nightlife scene and in general. We’re small enough, but diverse enough, to have meaningful and transformative conversations. Which we’re in the middle of, so there’s not a “We’re totally fixed now!” but it’s been good to have those conversations with each other.

You’ve described your latest single, “Unusual,” as a means of taking justice into your own hands. Can you expand?

The meaning of the song—and this happens to me with all my songs, too—shifts depending on how I’m feeling.

Sometimes, I’m like, “Fuck this. Men have been on the violent side of things since the beginning of time!” Why would I care if there’s one situation where I let my anger out? That’s nothing compared to what the patriarchy has done, what capitalism has done.

Then there’s the other side of me, where I believe in transformative justice, so sometimes I’m like, “This song feels a little extreme.” But there’s a reason I feel this way. It’s a conversation with myself, you know? I’m not a perfect person. I’ve hurt people in my life. I’m more in a space where I do believe people can learn. 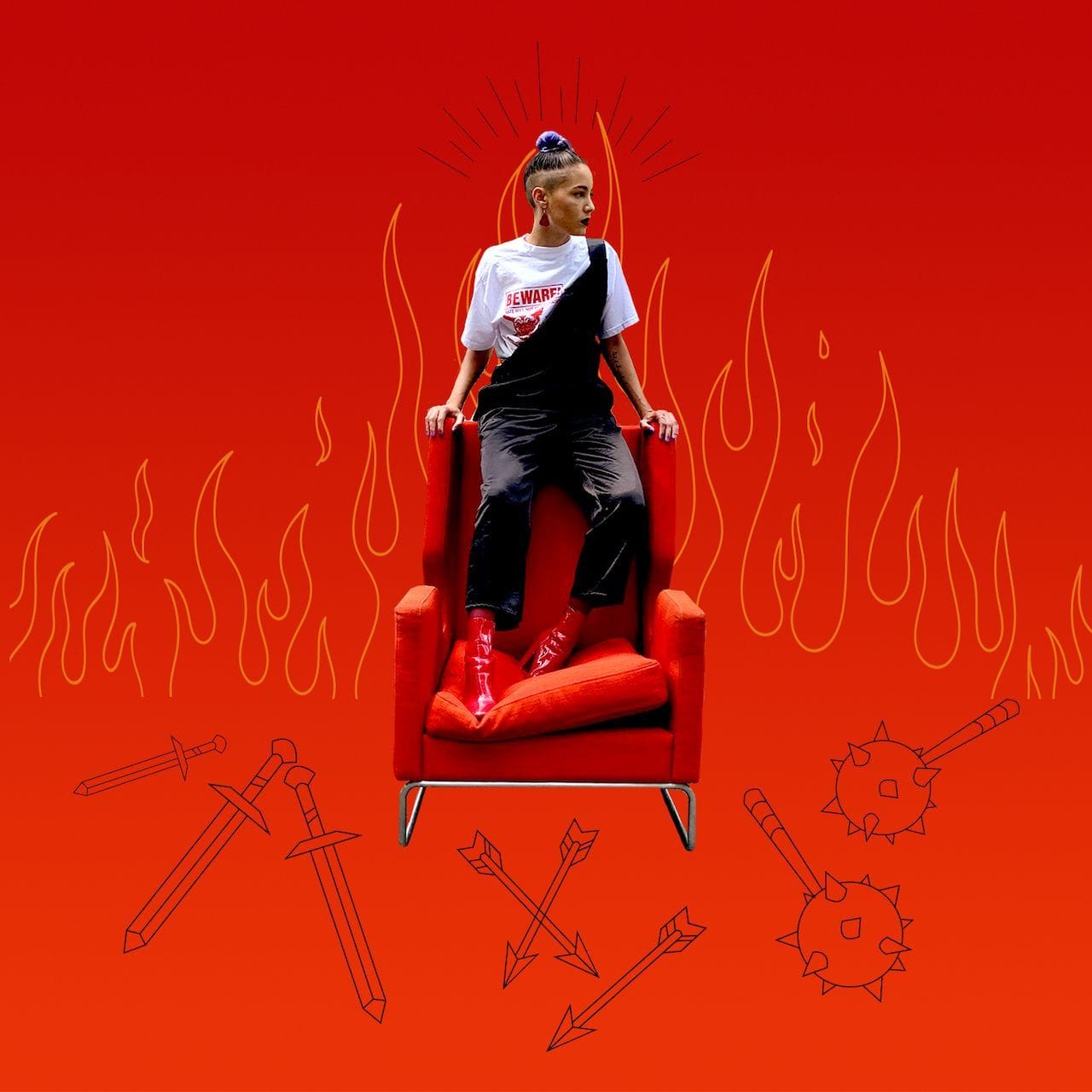 The project is called Killing Chiron, and it’s all a healing journey for me. “Unusual” is one of the angry points in that journey. “Unusual” is probably the angriest, most in-your-face song. As it relates to what’s going on here, we’re having conversations about transformative justice because we’ve had a lot, a lot, a lot of women, gender-nonconforming people, and trans people come out about sexual abuse and sexual assault within our music scene. A lot of the more popular, powerful names here have been called out. It’s been forcing people to talk, because it’s people that people are close to.

The conversation of canceling people and what does that mean? We want to move forward as a community, as a city that’s at the forefront of the uprisings and taking action to abolish the police. Then we have to talk about how we’re going to move forward as a community, and we’re realizing we wanna know how to communicate and heal. It’s a beginning to the answer of the question: “What the fuck are you gonna do without the police?” This is the first step of doing that, is hearing people out and at least having the information on the table.

As that relates to the song, it was me putting all my anger out on the table. This is how hurt I am, but this is also how powerful I am and how much agency I have. “I am angry, so now what?” It’s a turning point throughout the project. I wanted to put this song out [when the abuse allegations started coming out], because this is why I wrote this song. I feel like it seemed a little rushed, and it kind of was. I didn’t have time to focus on my original plan for it, but this song really speaks to this moment, for me, and if it helps anyone else in this moment, then I want it to be available.

Broadly, what role does music play in these uprisings?

It plays a role at every point. At protests and marches, there’s always music of some kind. Whether it’s chanting or songs led by protestors, or someone playing music while there’s a march going. It collects everyone’s energy. Also, in solitude, people are listening to music and using that to create space for themselves. I’ve been having a hard time finding the energy to sit down and work on music at all, but I was...

Well, you don’t have to be making music right now. We’re living through trauma.

It just feels weird, you know? ‘Cause it’s like, “Well, this is what I wanted,” when I was working. I just wanted more time to work on music, and now here I am with a lot of time… It still feels difficult, which I guess is okay, but it’s hard to remind yourself of that.

If you could say one thing to white people looking to learn, what would it be?

There’s a lot of resources out there for white people. There are white people who are educated on these issues, who are creating resources for other white people to use to educate themselves. I think it’s not very hard to find that information, [to be] taking that extra step to put the effort in.

Naysayers of the movement say we don’t know what the future would look like with these systems dismantled. If you could paint your perfect America, what would that be?

I’m a firm believer in starting from zero. That idea doesn’t completely scare me, because it’s so fucked up as it is. I think building is fun—whether that sounds naive because I don’t know issues would come at the peak of dismantling everything. If everyday people had the chance to use their voice to create the world we live in, it would be such a better world.

And dismantling everything goes into literally everything. It’s a mindfuck because it’s not just police. It’s corporations, the prison industrial complex, all kinds of shit that goes into every facet of our lives. I really don’t have an answer, because I just want to get to the point where it’s an option to create that, and I’d want the input of others around me, too. I don’t know the best thing. I don’t think any of us know the best thing, but I think together we can figure it out.

By Donna-Claire Chesman for DJBooth. Photos by Puffy.