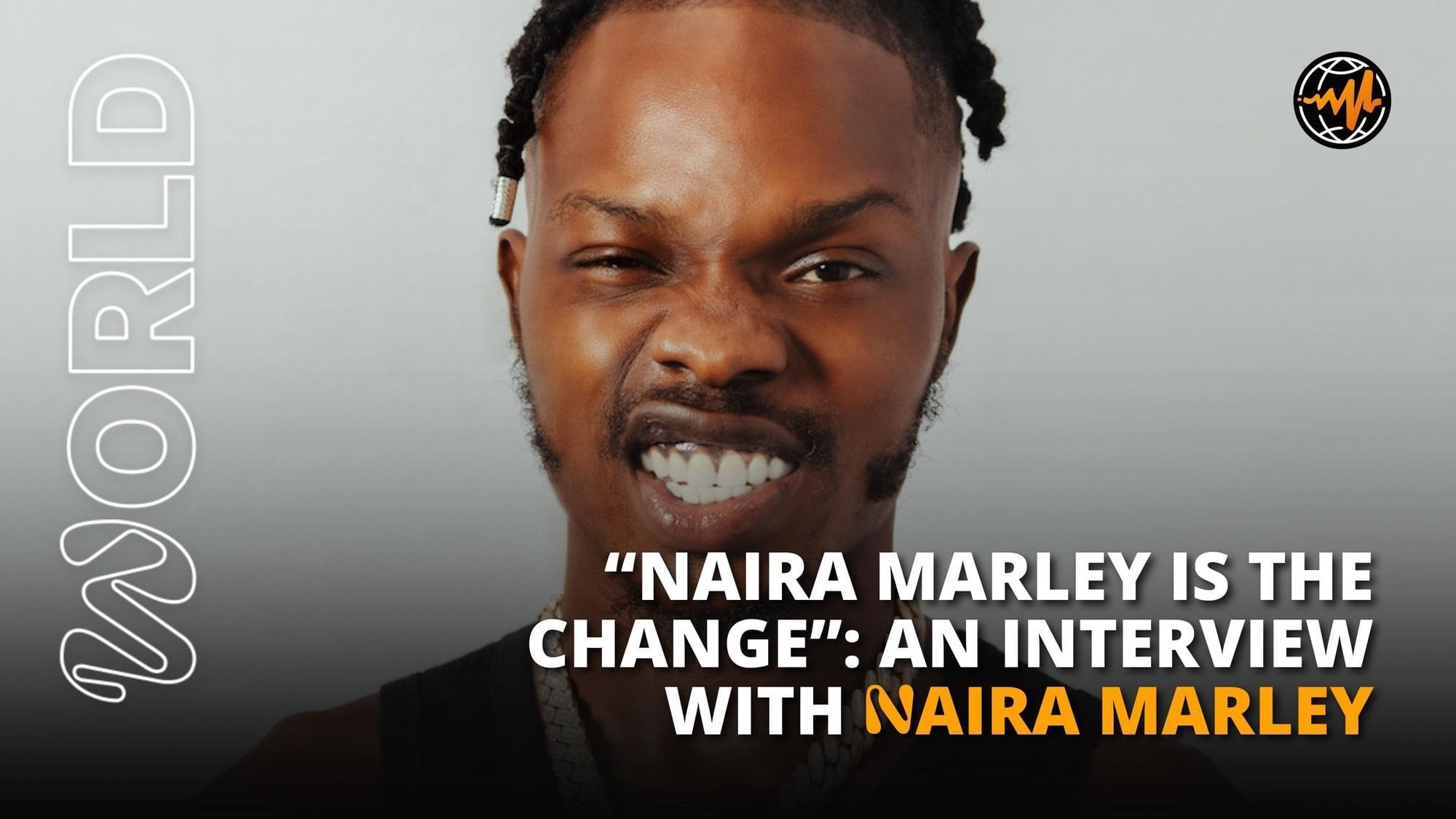 Naira Marley has lived many lives. Whether it is spending the first decade of his life in the hustle and bustle of Lagos or cutting his teeth in the mayhem of Peckham in southeast London, the rapper discusses these experiences with a nonchalant indifference even though they have distinctly marked the man and musician he has become. “Both Lagos and London have had an impact on how I approach life,” Naira tells Audiomack World. “Everything I know about music is tied in many ways to both cities.”

When Naira Marley first started to figure on mainstream radars around 2015, he was a pivotal figure in the UK’s Afroswing movement. Combining elements of grime, trap, and dancehall with African percussions, his style signaled the nostalgia of Afropop but maintained enough familiarity with British hip-hop for his growing audience. Since then, the musician born Azeez Fashola has undergone another evolution, becoming one of the most important Afropop acts operating presently after his Olamide and Lil Kesh-assisted “Issa Goal” became a runaway hit in 2018. More success and notoriety followed in 2019 when a cache of singles—“Am I A Yahoo Boy,” “Why,” “Opotoyi,” and “Soapy”—and a brush with law enforcement launched him into cultural icon status.

These days, the 31-year-old singer is Nigeria’s most controversial and irreverent music act, and it’s a role that he takes very seriously. Presiding over a devout fanbase that hangs on his every word, Naira Marley has been accused of corrupting young Nigerians but the singer insists that he just wants people to live their best lives. “Being a Marlian is a lifestyle, a mindset,” he says. “People like to say it’s ‘not giving a fuck,’ you can say that too, but it’s more than that. It’s not giving a fuck, but it’s also being free, being happy, not caring what people say about you, not giving in to depression, and just being you.”

No one can accuse Naira Marley of being deceitful with regard to his Marlian philosophy. On God’s Timing’s The Best, his debut album and first project since 2019’s Lord Of Lamba, the singer details his fascination with sex, money, and space across 14 songs that bear the imprint of the street-pop sound that he helped pioneer with friend and collaborator, Zlatan. “I tried to say what I am really feeling on this album,” he admits. “I want the Marlians to have this connection with me.” 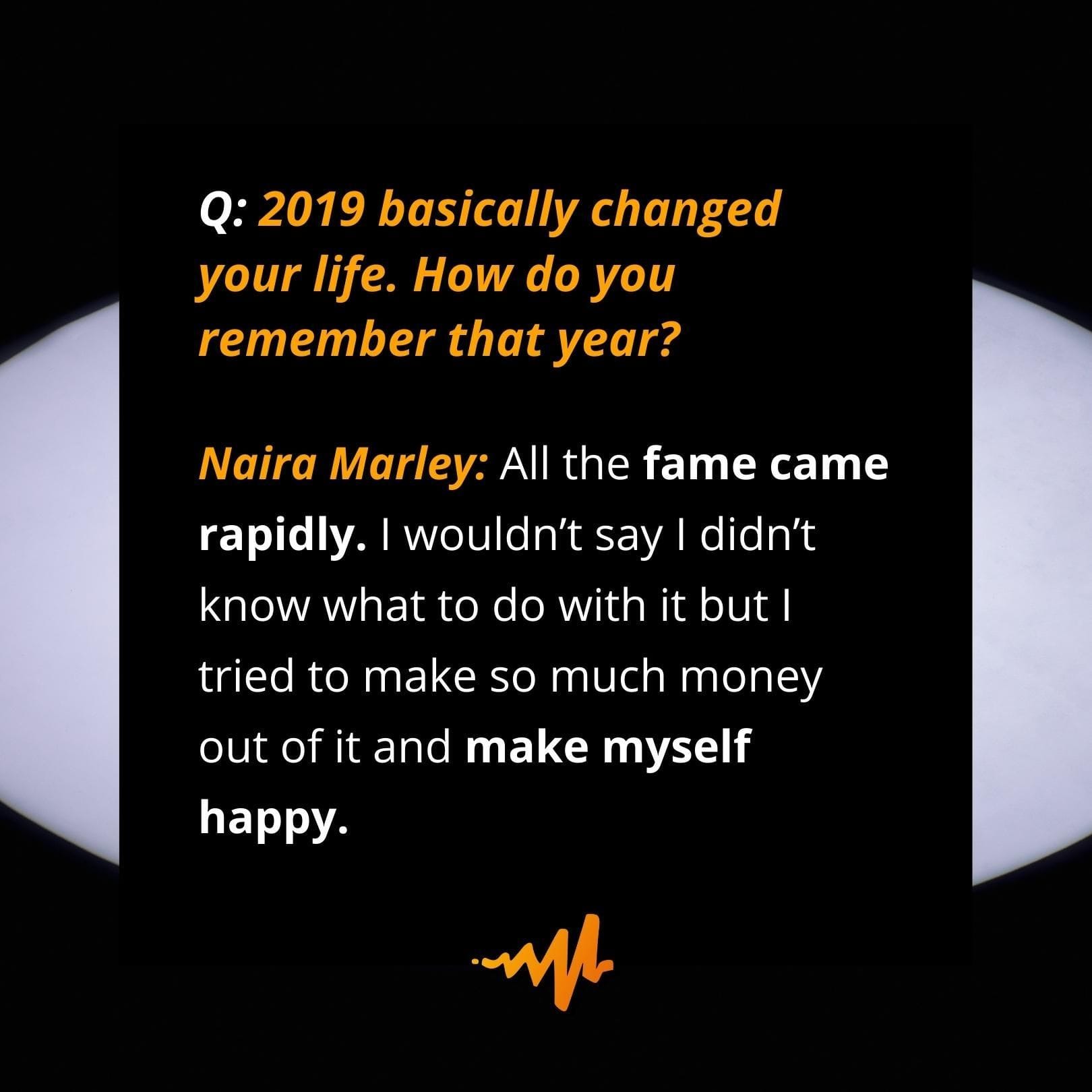 In your early days, you were a music entrepreneur and then you became an artist. How did that happen?

I’ll start by saying I’ve always been the one handling the aux. I was always the guy playing music that people didn’t know but that they liked. I have a lot of love for music and I’m very interested in music but I just didn’t know I was a musician. I had so much talent around me at that time and my friends were always freestyling and I’d back them up, do ad-libs, and cheer them on.

One day I had some cash and was like, "I’m gonna start my own record label!”I didn’t know how it worked or how to manage it but I told my friends, “I want to take you guys to the studio, I want to record a song quickly,” and then we went to the studio. It was one of those studios that you pay for like two or three hours back in the days and we had time left after they recorded what they needed to record, so I put a last verse on the song.

There was some more time so I made another song which was “Marry Juana.” On the way home, we were playing all the songs we made from the studio and that was the only song everybody wanted to listen to. It started from there and the song went viral.

“Marry Juana” is regarded as a foundational song in the UK’s Afroswing scene. When you were making this song, was it a conscious effort to create something new or did it just happen?

During that time, everybody was doing the same thing like freestyles and stuff like that, so I just tried to be different. I knew if I was going to record something, it had to be different, I didn’t want to sound like the rest. The plan was to do something new, something I would be able to listen to over and over again myself but it caught fire and we just moved from there.

“Issa Goal” really switched your sound from Afroswing to Afropop. Why did you change?

I feel like “Marry Juana” basically had the UK kind of vibe with the beat and all even if it had some African elements in it. But after, I tried to get into core Afrobeats because Yoruba is my first language, not English. I started trying Afrobeats to see what I could do with it. I did a song called “Ko Si Werey” and, one way or the other, Olamide put a verse on it and it went crazy. Since then, I was really interested in Afrobeats, and “Issa Goal” turned out to be one of the biggest Shaku Shaku songs. From there, it was Afrobeats.

2019 basically changed your life with “Am I A Yahoo Boy, “Soapy,” and all the legal controversy. How do you remember that year?

2019 surprised me in many ways man but I just made sure I made a foundation out of it. It was too much, it came out of nowhere, and all the fame came rapidly. I wouldn’t say I didn’t know what to do with it but I tried to make so much money out of it and make myself happy.

I realized I have tons of people listening to me and so many fans as well. I also remembered I went into music wanting to have a record label and the fact that people were listening to me made it the right time to start my label. I signed some talented artists that I believed in and I made a lot for myself. I’m into real estate and a lot of other things; my family is happy, I’m happy, everybody is proud of me, and I’m proud of myself so 2019 really changed a lot. 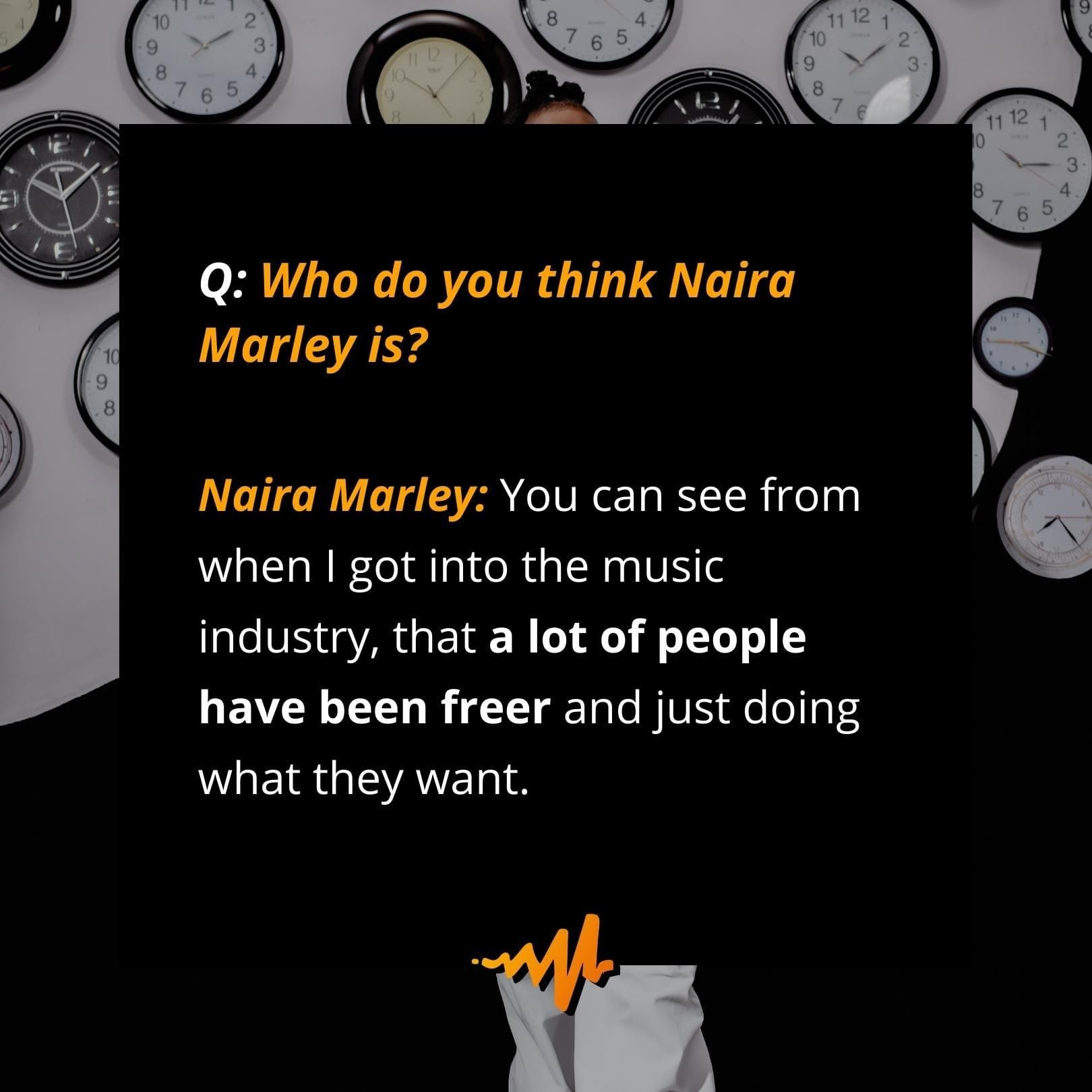 Speaking of Marlian Music, you have Mohbad, C Blvck, and Zinoleeskey—how did you identify their talent and know that you’d like to work closely with them?

I kind of saw myself in them. They were in a situation I was in—just looking for a little help. I just needed a little push and, as you said, they are talented and already doing so much for themselves. They had a huge street fan base already and they needed a little hand. That’s where I came in. I just gave my support and let them do their own thing.

A lot of people see Naira Marley as this guy that doesn’t conform to rules or just does things how he feels but to you, who do you think Naira Marley is?

Also, musically, there was hardly any music out there with my type of lamba or style before I came, but everyone does it now. I like it. I listen to them, they’re the best songs to me because it just keeps me going. I’m proud of it when I hear people use my flow because it means I’ve taught them something. A lot of people believe more in themselves because my music is easy and they go, “If Naira can do it, I can do it.” I see myself as the big catalyst that just changed everything.

After 2019, there was a lot of speculation about if you could sustain your momentum and you managed to do it. Did you hear those comments and how did you deal with them?

I didn’t hear it but it’s okay for people to try and put an end to your success. All of that just keeps me going. All of that makes me plan harder. Right now, I’m making more money than I ever made in 2019 or 2018 when I was in another country. I am never going back down, never going broke, and everything has worked out.

You have to be smart and I’m being smart. I’m doing so many things to keep being at the top. I’m so blessed and favored and proud of myself, but there are still plenty of things to do. I’ve got music in me and I didn’t come this far to come this far. I can’t give up now and some people might think I’m going to stop or something is going to happen but they should keep watching. 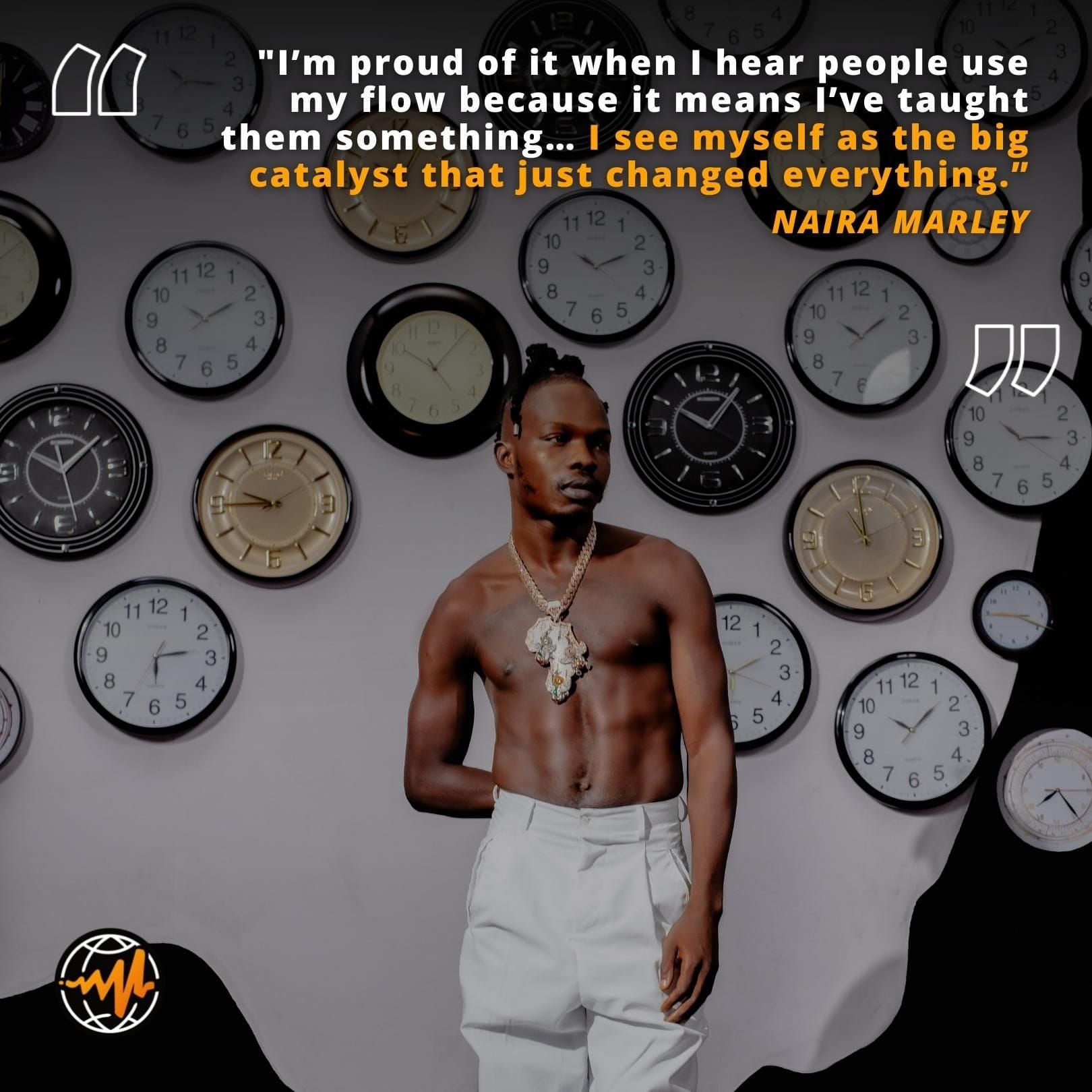 You recently dropped your debut album, God’s Timing’s The Best. How important was it to give your followers that moment?

My fans, the real Marlians, wanted a real body of work. I basically did this for them because they wanted a project and to be able to dance to like 14 songs and that’s what I did, I gave it to them. It’s important because I’ve been in the game for maybe not that long but I think I deserve to have an album at least. So there it is, that’s my album and it’s on my portfolio.