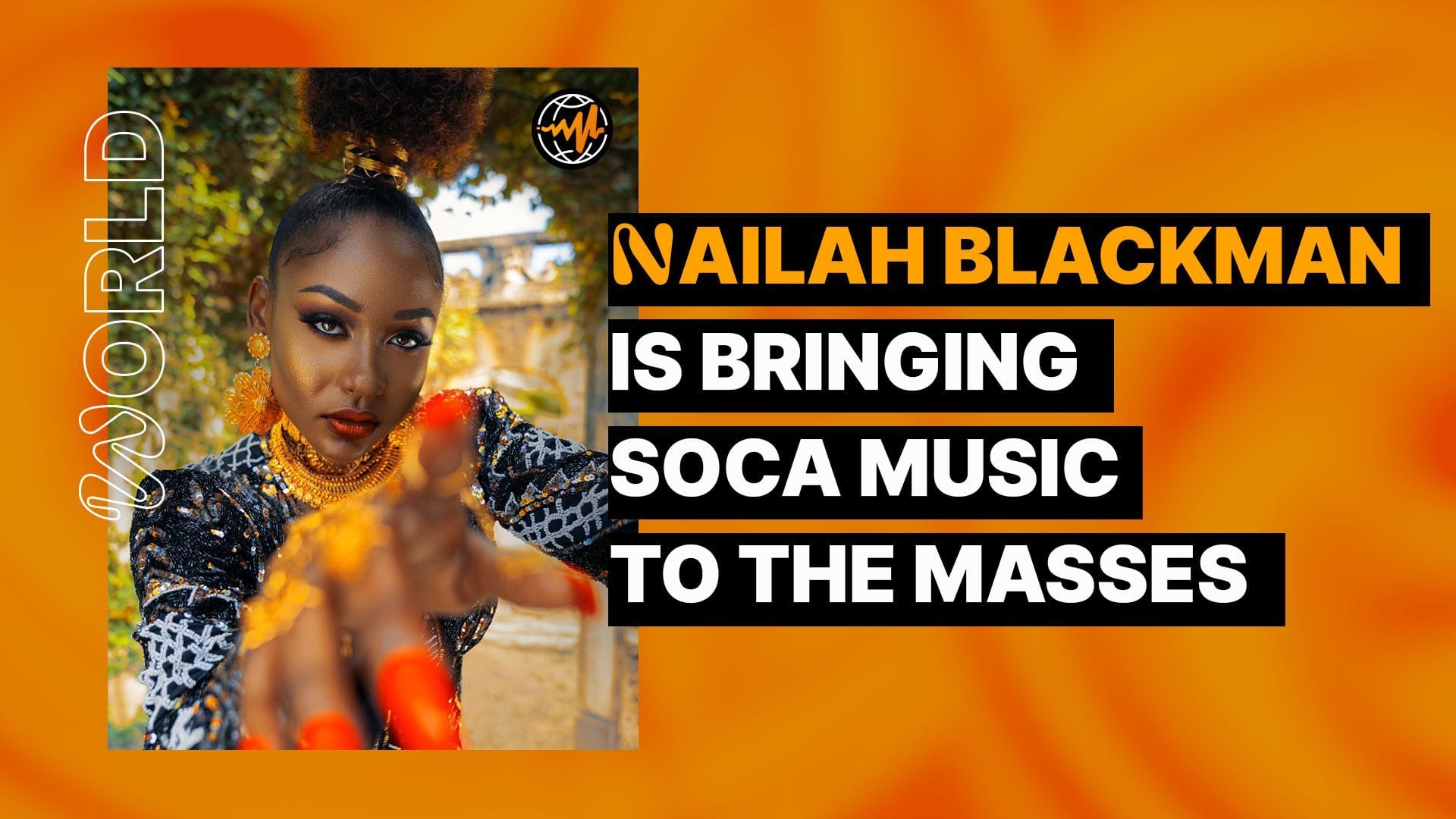 Every year, Trinidad Carnival is celebrated before Ash Wednesday. Exuberant costumes decorate the streets throughout the land of the hummingbird on Carnival Tuesday with masqueraders chipping down the road in pure excitement—displaying the physical embodiment of pure bliss and euphoria. Customs and traditions like steelpan and stick fighting competitions have been preserved and highlighted as an essential part of tradition. The sweet sound of soca music penetrates the airwaves with artists affectionately singing about their love for the festivities.

For the 23-year-old singer Nailah Blackman, a Trinidadian born in San Fernando, this celebration is embedded in her roots as her namesake is the reason for soca music’s conception.

Known for her ever-changing look and distinctive vocal stylings, Blackman reigns supreme on singles like “Iron Love,” an ode to her heritage and the spirit of the twin-island republic Trinidad and Tobago, and fan-favorite “Baila Mami,” which is sure to have you wining down low before the chorus is introduced. While the artist was introduced to soca by birthright, she flexes her penchant for multiple genres on her 2019 album, The Reel—with singles like “Sweet & Loco” and “Boujee,” which explores Afrobeats and Baile Funk. On her latest release, “Dance Monkey,” Blackman continues her knack for experimentation with the reggae-inspired single displaying her wide scope and appreciation for music.

Carrying the last name Blackman comes with its own expectations and infinite legacy, but Nailah is here to carry the freedom, resistance, and beauty of soca music to the masses without diluting its purpose. “Sometimes you can forget what you were going for when you started just based on getting caught up and I think never losing sight of who you are deep down inside is just as important,” she says. Without question, Nailah Blackman was made for music and wants to share it with the world. 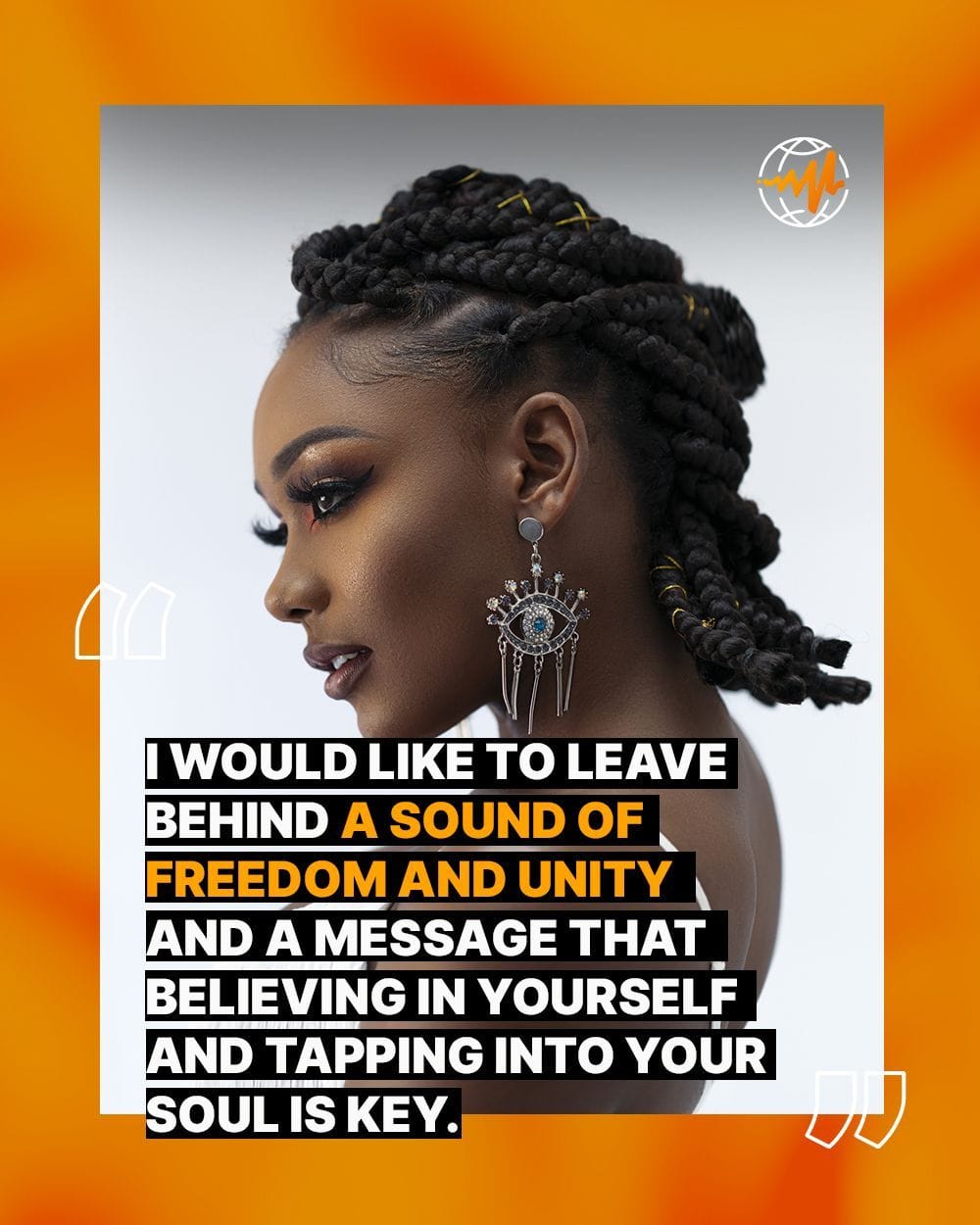 You come from a musically inclined family. Your mother is known for calypso and your late grandfather, Garfield Blackman, also known as Lord Shorty or Ras Shorty I, is credited for inventing the style of music known as jamoo and soca. What does this legacy mean to you?

The legacy he left for the family is more powerful than anything else. The whole reason for creating soca music was to unite his country because he felt very close to everybody. There was a lot of racial tension in Trinidad at the time between Indians and Africans, and to this day, there still is. Being a Black boy and growing up in an Indian family, he didn’t really know his Black side of his family much. But he grew up as a Black man singing calypso, which is “Black music,” and he felt the need to join the two worlds because he felt like his home life was separated from the life he lived when he became a man. He just wanted to bring that together.

He was a loving, positive person and that’s why he worked so hard to fuse the music of East India and African culture and in turn, create soca. And ultimately, the legacy he wanted to leave behind was unity and freedom. His legacy means so much to me because it never really went in the direction he saw it going; it just kind of became its own thing.

And now, with my journey, with me doing soca, what I would like to leave behind is also a sound of freedom and unity and a message that believing in yourself and tapping into your soul is key. I think music has detached itself from the soul and that’s what soca is: the soul of calypso. So it’s important for everybody to touch a piece of their soul when they listen to music or any kind of music other than soca.

On The Reel, you experimented with different sounds. Afrobeats on “Sweet & Loco,” Baile funk on “Boujee,” with some R&B influence. What was the intention there?

I’ve been doing music since I was literally four years old. I’m very much into all genres and grew up listening to country, opera, alternative, and everything in between including hardcore rock, classical, Indian, and African music. Brazilian music, specifically Baile funk, has always been a part of my playlists, and since I stepped into the soca arena, I quickly realized how things are done and it’s like, if you’re a soca artist, you just do soca. But I like everything and I don’t want to do this one thing. Yes, I want to represent this music. I want to take this music to the next level, and I want the world to know about soca music and carry on the legacy but I’m also an artist. I’m not just a soca artist.

I just want to be able to show people different sides of me because it’s also complicated and hectic to create when your tour schedule is crazy. With soca, there’s carnivals all around the world, every single weekend you’re booked, and the week just kind of folds into the weekend. You don’t get the time to create, especially when you’re just doing this one thing over and over.

So for the album, we took two weeks in Miami to do a writing camp, and outside of that, I was still trying to create music on my own time. When we sat down with these writers, we told them, we just want to go around the world and put out a reel, which represents different parts of me. 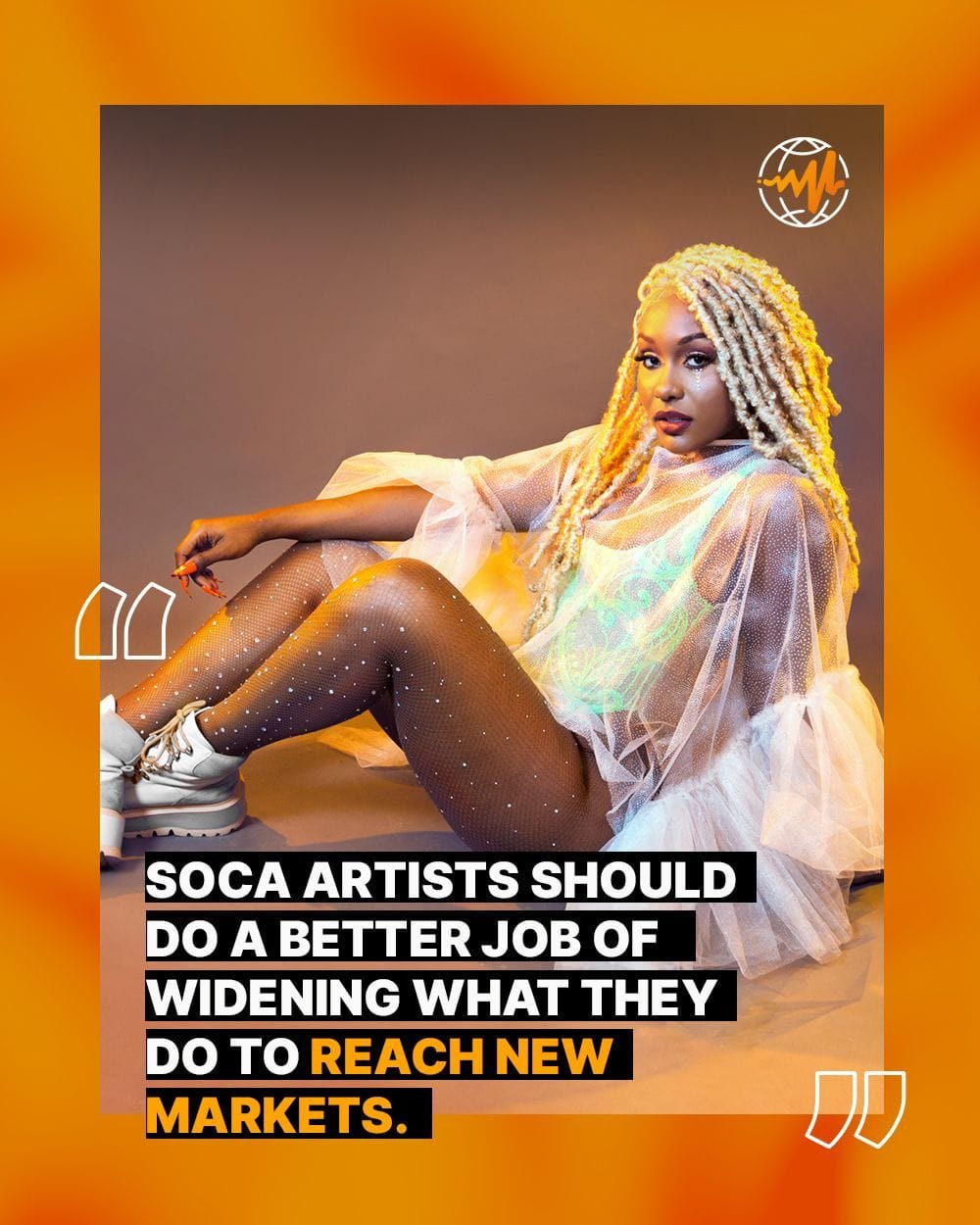 In soca, women have been rallying for a chance to be highlighted and respected. Being that the soca industry is mainly dominated by men, how do you navigate it and ensure that your voice is heard?

I just say work harder, do more, and keep your head focused to the front. Don’t even look to the side—just look at any direction forward. Because if I’m going to look at the disadvantages I get from being a woman in this industry, then I will fail to see the advantages and I won’t take advantage of them.

Caribbean music, specifically soca, doesn’t get the respect it’s due. Do you feel like consumers and labels put soca artists in a box?

Consumers do put artists in a box but I would say artists put artists in a box. At the end of the day, you are who you choose to be, and other people can’t make you do what you don’t want to do. So if you let people do that, then that’s your problem. You have to take yourself out of the box.

I don’t think soca gets the recognition it’s due. I wouldn’t say respect necessarily, because people do respect this and they acknowledge it. But I would say it doesn’t get [recognition] and that’s because of our numbers. The Caribbean, we’re small in comparison to the rest of the world. And we just don’t make up those masses. I think soca artists should do a better job of widening what they do to reach new markets. I understand it’s not easy but it’s a challenge every soca artist should take on to get soca further. The world is now as open as it could ever be, with social media and everything, so I think our time is coming.

Trinidad by large is mourning the absence of Carnival but so much beauty and creativity have come out of it, namely music being made outside of Carnival season. How has this period affected the industry?

The lack of Carnival has been really, really hard on us and I would say it’s been hard because of our love for it. But in a big way, the financial aspects are huge because this is our bread and butter. This is how we survive. And it’s not just the artists, it’s literally the entire industry, from promoters to the venues to every single aspect of lighting, sound, all these different bands, and a lot of people within this creative industry. It’s been hard for a lot of people. Every year, we express how we feel through Carnival. But at the same time, as you said, it’s fueled a different type of creativity, a different type of freedom, and a mindset that now people are thinking broader than the actual festival, especially me as an artist.

What can we expect from your new music/direction in the next few years? Where do you see Nailah Blackman?

It’s hard to say five years because I kind of work in three-year intervals. But in the next three years, I definitely see myself winning a GRAMMY, or a couple of GRAMMYs, and topping the charts. I also see myself being on my way to the next level of stardom, especially internationally. Just on a totally different playing field. Overall, what I see for myself in the future, along with my creative vision, is to get to be myself more unapologetically because even though you see me as unapologetic, I really do play it safe a lot, because I know they’re not ready for all this yet.