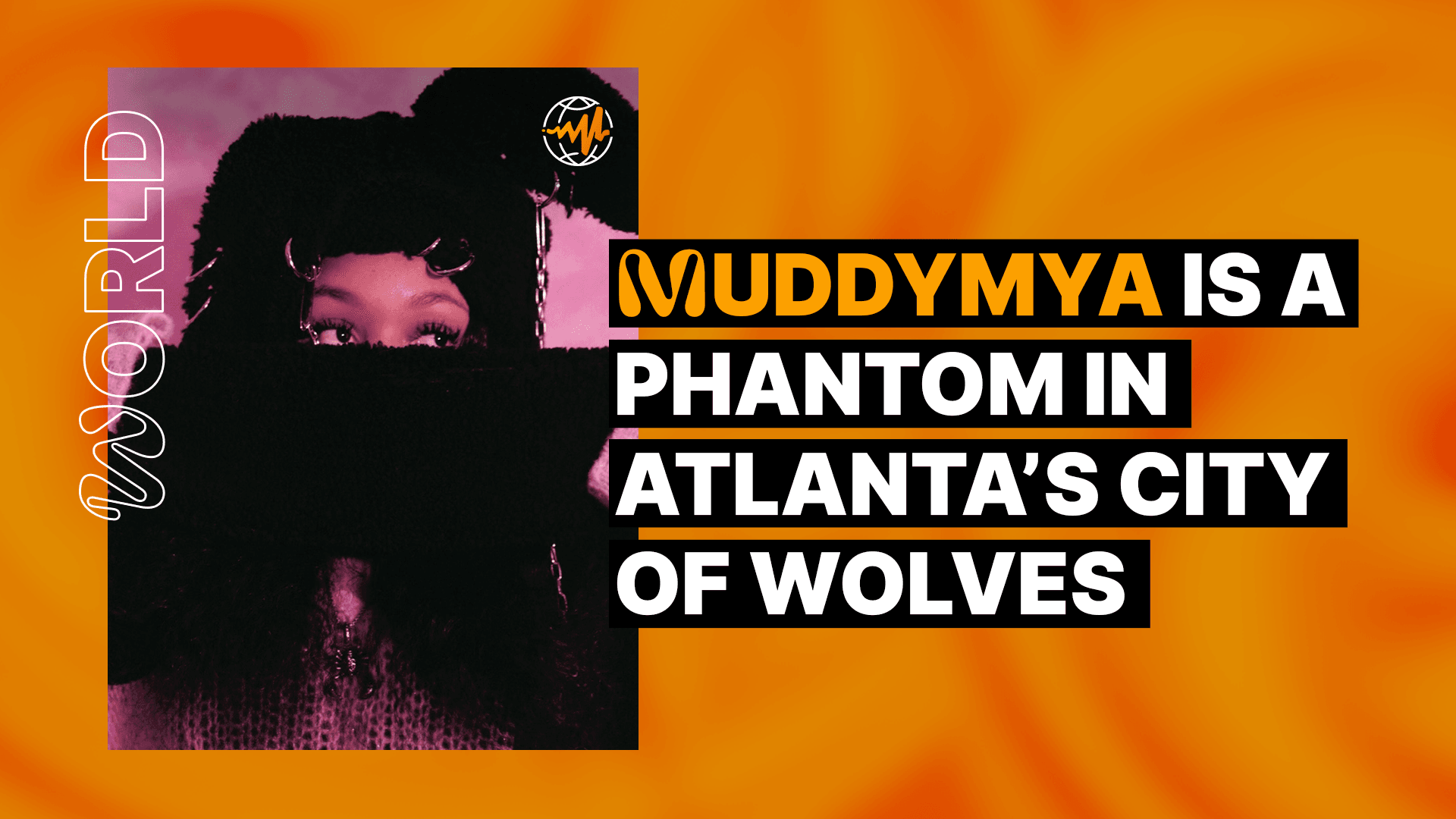 MuddyMya is draped in black. A skull-embroidered shawl covers her face, revealing only her eyes. Most budding city stars claim attention when they walk into a room. Mya, however, silently floats under its guise—I could have scanned the Atlanta pizza restaurant we met up at a dozen times before noticing her. And though the music she makes is high-octane, her demeanor is anything but. She’s thoughtful, calm; a composed phantom in a city of wolves.

While her aura is different from most of her contemporaries, MuddyMya’s roots remain unmistakable. The Stone Mountain native possesses the same incessant yet soft-spoken swagger that made Atlanta a hip-hop mecca in the first place. She is fluent in the sacred tongue that separates her city from the world—an elastic drawl that teeters between lazy and poignant. She brings a technicolor energy to the studio. It’s as if she steps in the booth half-asleep, unleashes iridescent beams from her throat, then moseys out to roll another blunt.

Though Mya has only been making tracks for under two years, she is by no means inexperienced. Her mother’s dream was to be an R&B singer, and while that didn’t pan out, she made sure music was a constant factor in her daughter’s life. She introduced Mya to an eclectic batch of artists such as Evanescence, Lil Wayne, and Aaliyah, who Mya now considers influences. In high school, Mya spent her time in band and chorus, but it wasn’t until 2019 that she decided to fully pursue music: “I really started because my friends were telling me I was hard. I don’t have ‘yes man’ friends so I was like, ‘If they’re telling me this, it must be good.’ And once I really started, I was like, ‘Yeah okay, this is what I’ma do for sure.’” 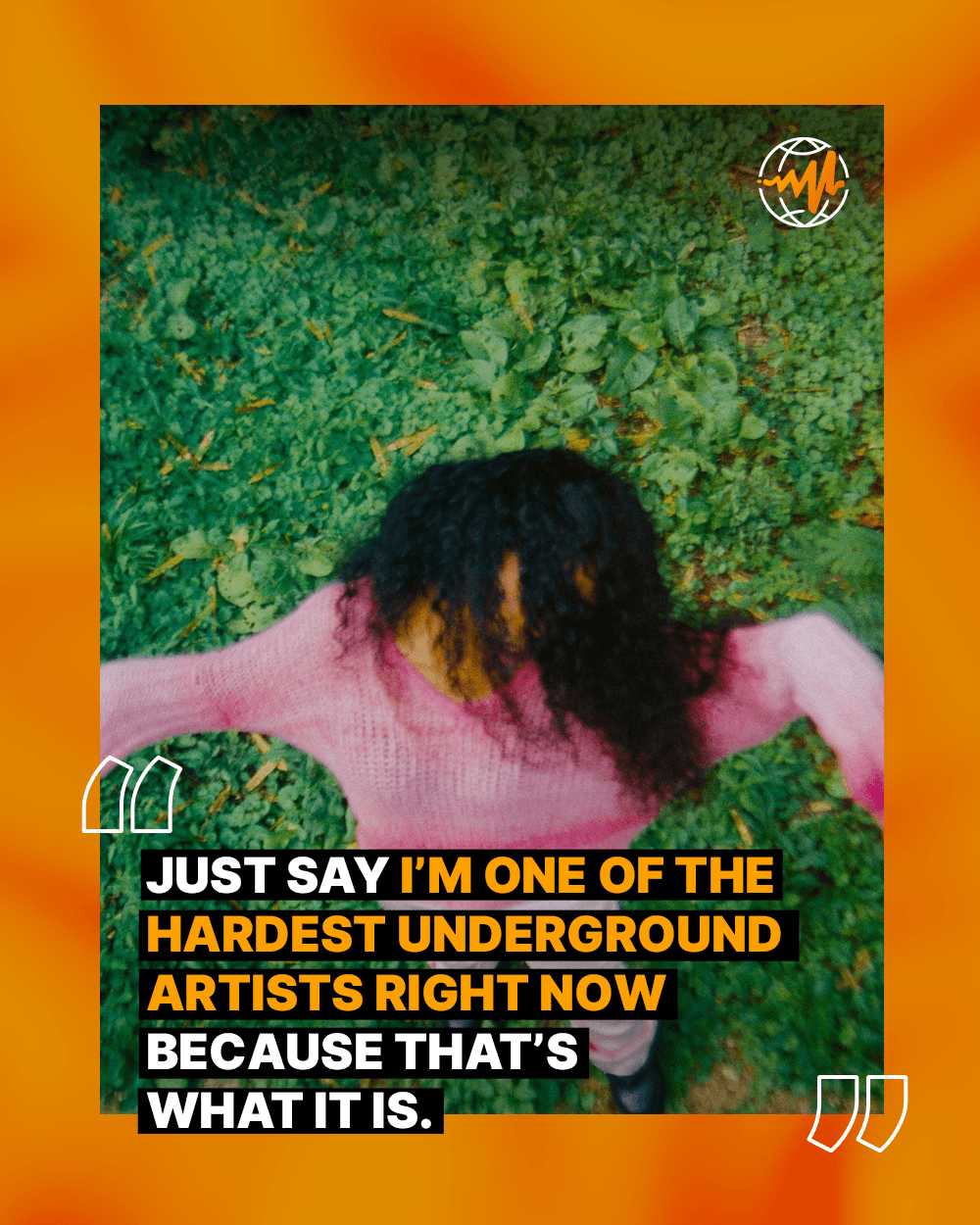 MuddyMya’s first EP (MUDBATH, released March 2020) wasn’t a startling debut, but it made her potential crystal clear. She was immediately backed by notable city figures such as RobOlu and Popstar Benny and continued the slow grind by releasing singles and another tape, With Luv, GG. However, her newest project marks the biggest leap of her career.

MUDDYWORLD is the first instance of her potential taking full form. This is largely due to North Carolina-based producer OK, who laid the instrumentals for the entire tape. “The best way I can explain our chemistry,” OK tells Audiomack, “is that it feels like I’m with an old friend when I’m around Muddy.” Though the production is diverse, through OK’s seamless sequencing, MUDDYWORLD maintains a feeling of oneness. “C*NT” and “RIP SPEAKER KNOKKERZ” show their coupling at its strongest. Both tracks are impromptu fireworks shows that fuse OK’s warbling sonics with Mya’s bursting colloquialisms.

What impact do you think the city of Atlanta has had on your rise?

If I were anywhere else, I don’t think it would’ve happened this fast for me. I feel like the support I get in this city is crazy. They resonate with my music. The shit I talk about is cultural, so it makes sense. This is my home, for real.

Has your relationship with your old music changed over time?

Yeah, I only like two songs on MUDBATH now: “PINK” and “GYSM.” Everything else I can’t stand to hear.

No. A lot of people love “ALONE.” That’s one of my mom’s favorite songs by me. I don’t know. I feel like I was in a different space. I didn’t know who I was sonically as an artist at that time.

Do you think you know now?

With MUDDYWORLD, for sure. I now know exactly where I wanna go and what sound I need to create to resonate with the masses. 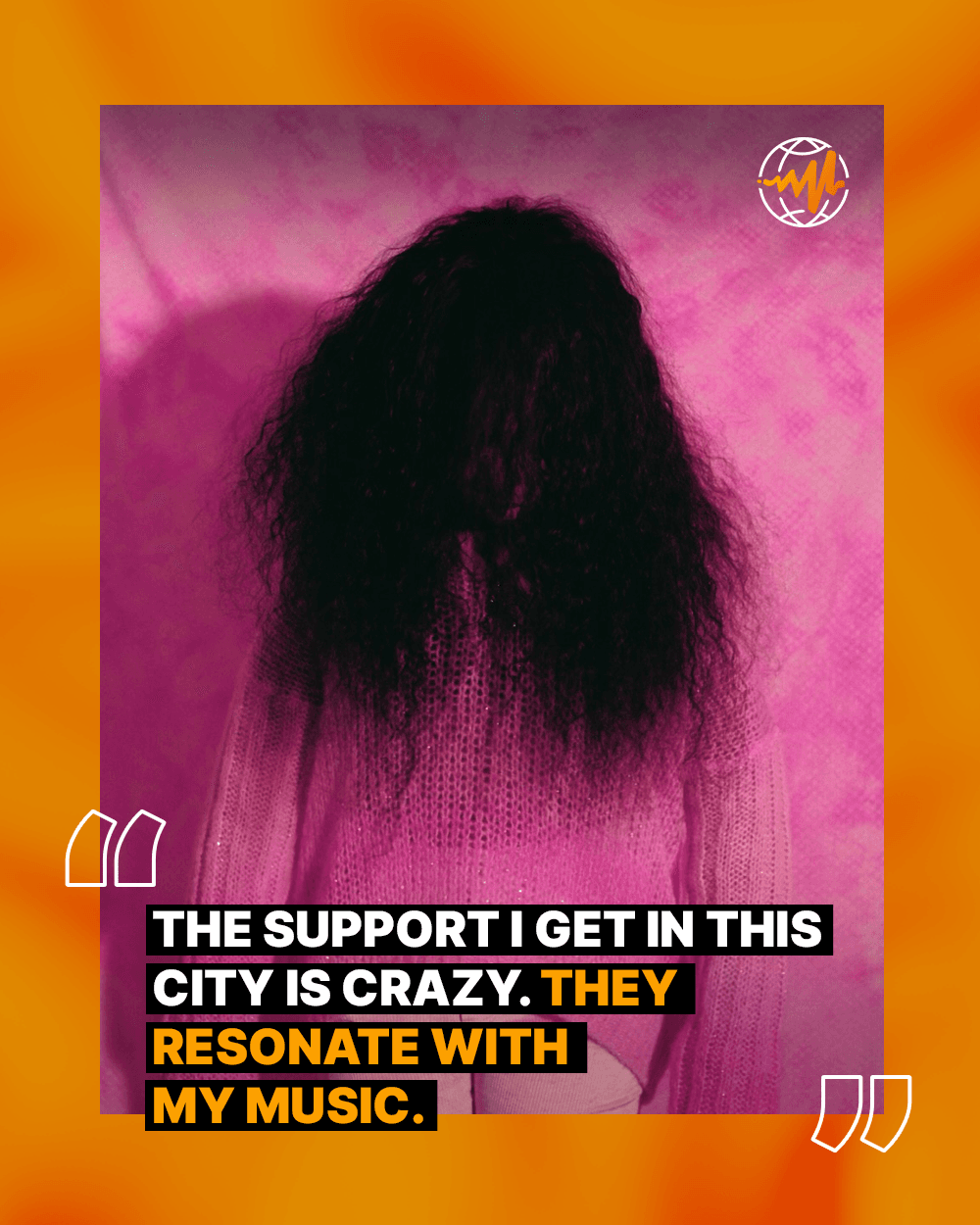 What were OK’s contributions to MUDDYWORLD?

OK is my brother, for real. Even with the way I met him, I feel like the universe aligned. We met at a random ass Airbnb. OK was there and me and him just clicked off the bat. Literally the first beats he played me I was like, “Oh yeah, I wanna get on them.” Everything he played me I wanted to get on.

After that, we just built a relationship. We had lots of shit in common like the video games we play. The music came naturally. Without him, there is no MUDDYWORLD. He helped me create what was in my brain.

OK. OK produced the whole thing. He’s from North Carolina, so he rode the bus to Atlanta and then we locked in for a whole weekend. It was four in the morning and he said, “I’m about to flip Taylor Swift.” I was like, “That shit is either gonna be ass or hard.” He said, “I promise you it’s gonna be hard.” So when he did it I was like, “Nah, this shit is actually hard.” So we made the song at like four in the morning.

I’ve seen a lot of pages on social media label you as one of the “best female underground rappers.” How do you feel about that?

I don’t like the female part because I feel like when people say “girl rapper” or “female rapper” they’re trying to say “you’re good—for a girl.” Just say I’m one of the hardest underground artists right now because that’s what it is. I’m harder than some of the guys if we’re being honest.

What do you wish you knew about the music industry when you first started?

One thing I wish I knew is that these labels are gonna come, but it’s all about the right time. You will know when the right time is. Don’t think, “this is the end all be all” when you get your first offer. Also: consistency. Before I was like, “Oh, I could just drop this then chill for a minute.” But now, I wish I would’ve dropped more music.

What’s your dream with music?

I wanna buy my mom a big-ass crib. Travel the world, ‘cause that’s all I wanna do. Then do shit with my friends. If I could get all my friends a job and they could travel with me and do whatever the fuck we want, then I’ll feel successful. I don’t need a big-ass crib and a car. As long as my mom gets that shit and I can travel, then that’s all I want.