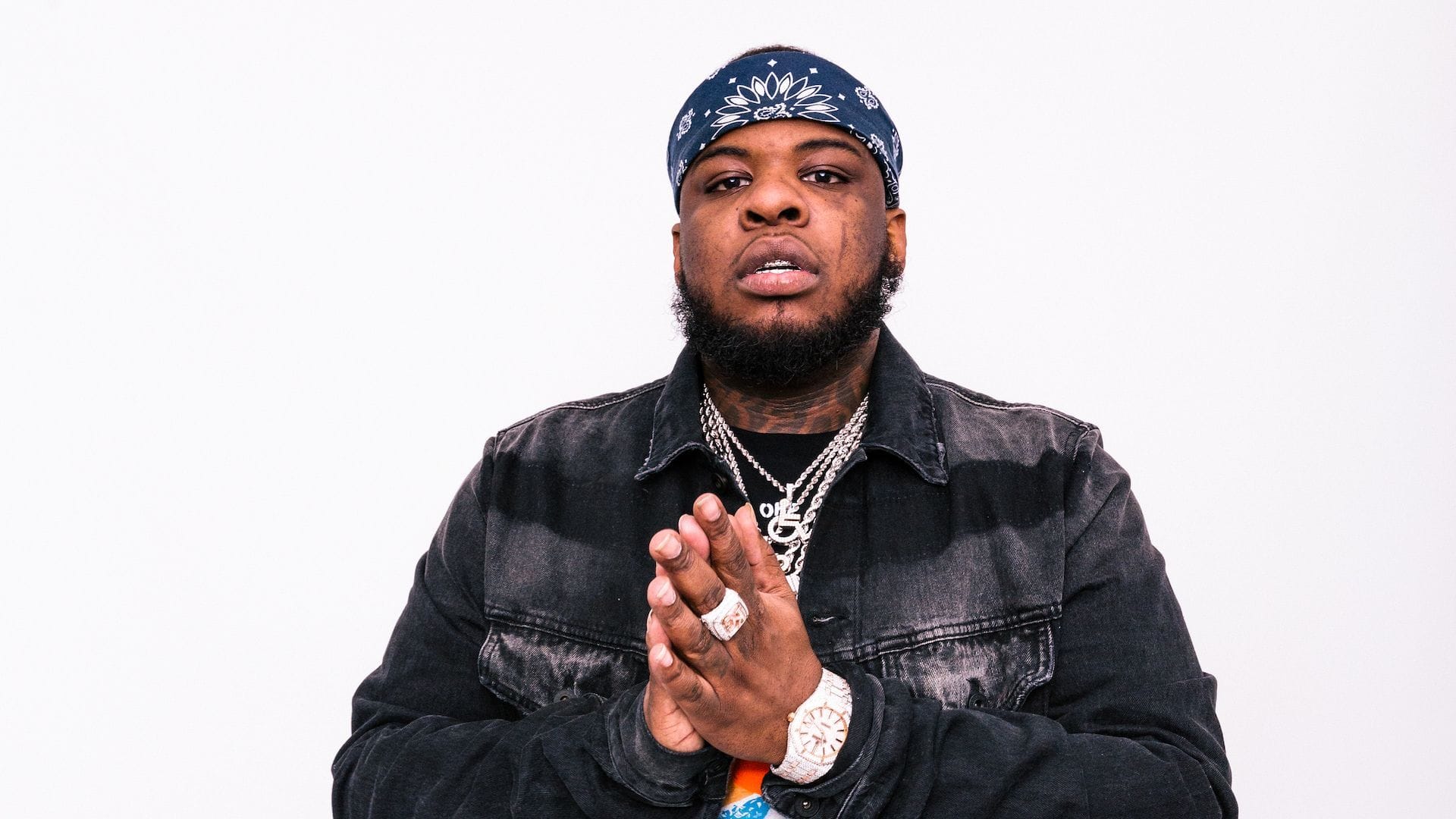 Maxo Kream wastes no time in reminding you he’s a Crip. It’s obvious in most of his earliest works, songs like 2015’s “Cell Boomin” and “Trigga Maxo,” which Maxo filled with anger, passion, and the cold realities of the streets. It’s present on his RCA debut, Brandon Banks, released earlier this year, in songs like “Drizzy Draco” where he sends fellow Crips to do a blitz and gets you killed for less than three stacks. It’s present when Maxo shows up for an interview and introduces himself as “Maxo motherfuckin’ Kream, the flyest Crip you ever seen. That’s it. Just like that.”

Just like that, we sit down at the Honda Center in Anaheim, California to discuss the Houston rapper’s latest album. Brandon Banks is Maxo’s most critically acclaimed project to date and his most successful, being the first to hit the Billboard 200. Named after his father, the LP is a portrait of Maxo’s life filled with vivid stories of gangbanging, trapping, robbing, and various other illegal activities. As the rapper grows older and more mature, though, he’s painting a more complete picture, one that includes not only the actions that occur but the effects that they have on the participants and surrounding community.

“I’m going from being a young boy to a man,” Maxo says. “I’m of age, but mentally, I’m growing, so I want to see all my fans grow mentally, too. From ‘Trigga Maxo’—’I’ma shoot your baby, shoot your mama’—until now. If you do shit like that, this is what comes with it. I showed you the cause; now I gotta show you the effects."

Just because he’s more mature these days doesn’t mean he has any more tolerance for bullshit. He’s got no respect for frauds and even less for police taking black lives, and he’s quick to point out that he’s the current king of Houston despite the success of friend and artistic inspiration Travis Scott. He will highlight his triumphs, but also break down the problems he experienced along the way.

Maxo Kream is the most fly Crip you've ever seen, and Brandon Banks is the latest dispatch from one of rap’s best storytellers.

Brandon Banks is your major label debut. What does that mean to you?

It means everything and it did what it was supposed to do. I have the highest-reviewed rap album so far this year in Pitchfork. I made the Billboard Top 200, so I'm happy.

What makes your album resonate?

I put blood, sweat, tears, and Adderall into this tape. I took my time with it. Music nowadays is like fast food, but I put in the Ruth's Chris. Sit down, wait on this. You get an appetizer from the videos, you may get a dessert too. You never know, just stick around. And we tip good!

Your sound has evolved a lot, especially with your use of different melodies.

Z-Ro and Future are some of my favorite rappers, and they both use melodies. [This time,] I actually locked in and got lost in the studio. This is my first time doing 12-hour sessions. Usually I write and then go to the studio for two hours, but this time I didn't write. I freestyled everything. I wrote the hook for “Meet Again” because I was going through it. But don’t get me wrong, I think with my next hit, I’ma try a little bit of writing. If it doesn't go well, then I’ll freestyle again.

“Meet Again” is a very personal song. What were you going through at the time?

The fact that my dad got caught with another case, it’d be his third time going to federal prison. There’s a lot of personal shit. Everyone sees the glitz and glam, but people don't know what you’re really going through. Everyone got their problems, whether they’re big or little. Problems that might be little to you might be big to someone else. People are committing suicide. Everyone has their problems and everyone can relate to having problems.

It’s no secret the U.S. Criminal Justice System is broken. Can it be fixed? What needs to happen?

Shit, police need to stop shooting us. Black lives matter.It’s a double standard. I watch everyday how white people get into it with cops, they running with knives and they get tasered. But black people, they even reach for their wallet and they get killed. It goes hand-in-hand on both sides. I'm from Texas, a very redneck state. When I see all this cop killing on TV, it's like, damn, y’all are just now seeing this? Because they've been doing that in Texas. Just months ago, a young black male was lynched in front of Westside High School in Houston right off Westheimer on Briar Forest [Drive]. Westheimer is like Hollywood, but it don’t matter. We really have KKK out there. We really have that kind of shit.

Is that what you experienced growing up?

I grew up in a more urban area, in Southwest Alief, Texas. Happy Homes. It was different. I dealt with a lot of n****s. When I went to the suburbs is when I really experienced racism. The kids love us but not the parents, or the grandparents. It is what it is.

How did music become an outlet?

Man, first it was fashion. Music was something that came about when I got locked up and started rapping. When I got out, there was already a group shooting videos so I’m like, “Shit, that’s what I need to do.” Rap was just to get my clique live, but when it really picked up, it was time to make it a career and take it seriously.

What was the biggest lesson you learned while you were locked up?

These laws aren’t gonna play with you. I don’t care if you’re 18 or 19—you a grown-ass man in the system and they gonna handle you like that. Act accordingly.

Travis Scott is on the album. What does that collaboration mean for Houston?

It means a lot but I grew up with Travis. I've been rocking with bro. Travis was one of the first n****s that made me start rapping. I used to go to parties with him and turn up. I met him when I moved into the suburbs.

What was it like seeing his career take off?

He was so dedicated, I knew bro was going to make it just how he loved music. He put me on my shit. He's the one who got me mixing and mastering my music, because I was just putting out shit for the streets like, “Fuck it.”

Tell me about collaborating with Megan Thee Stallion on “She Live.”

That shit’s crazy. I've been rocking with Megan for so long. She used to come out to parties and turn up. It felt good because before I caught my big case, I was thinking about signing Megan, in 2016. Shout out Megan, she's doing her thing. She’s making Houston look good. I'm the king, she's the queen.

What inspired the Nicki Minaj line?

“I need a Nicki like Safaree...” because Nicki the baddest bitch. It’s a lot of bad females coming out. Females are really taking over. The fellas need to step it up because we out here rapping lazy. These females really coming. I like that. I like the empowerment.

Your song “Roaches” airs out fake gangsters and new rappers who lie to sound cool. Where is the current generation of “internet-ass” rappers, face tattoos, and social media trolling headed?

I don’t really want to speak on it because it is so puny and below my pay grade, but I’ll just say I like YBN Cordae. I like what he’s doing. He keeps it very authentic. You don’t have to be no gangsta to impress me. You gotta be yourself, 100%. I don’t care if you’re a billionaire—be you and I'm going to respect that. Never trade your respect for attention. A lot of people I respect, but then they do some shit for attention and they lose my respect.

Brandon Banks is the alias your father used to commit fraud when he moved to America from Nigeria. Talk about your relationship with him.

My dad is my n****. We fight a lot, but that’s my n****. It went from being my dad, like, “Oh shit my daddy here, I can’t do whoopity woo…” There was a point where I was out there selling dope and packing pistols, but was scared to let my dad know because he was that authority figure. But now, that n**** knows everything. A lot of rappers can’t get on no tape and do this shit with their dad because they’re fake. They’re frauds. They on some ignorant shit.

Maxo Kream is the flyest Crip you've ever seen.