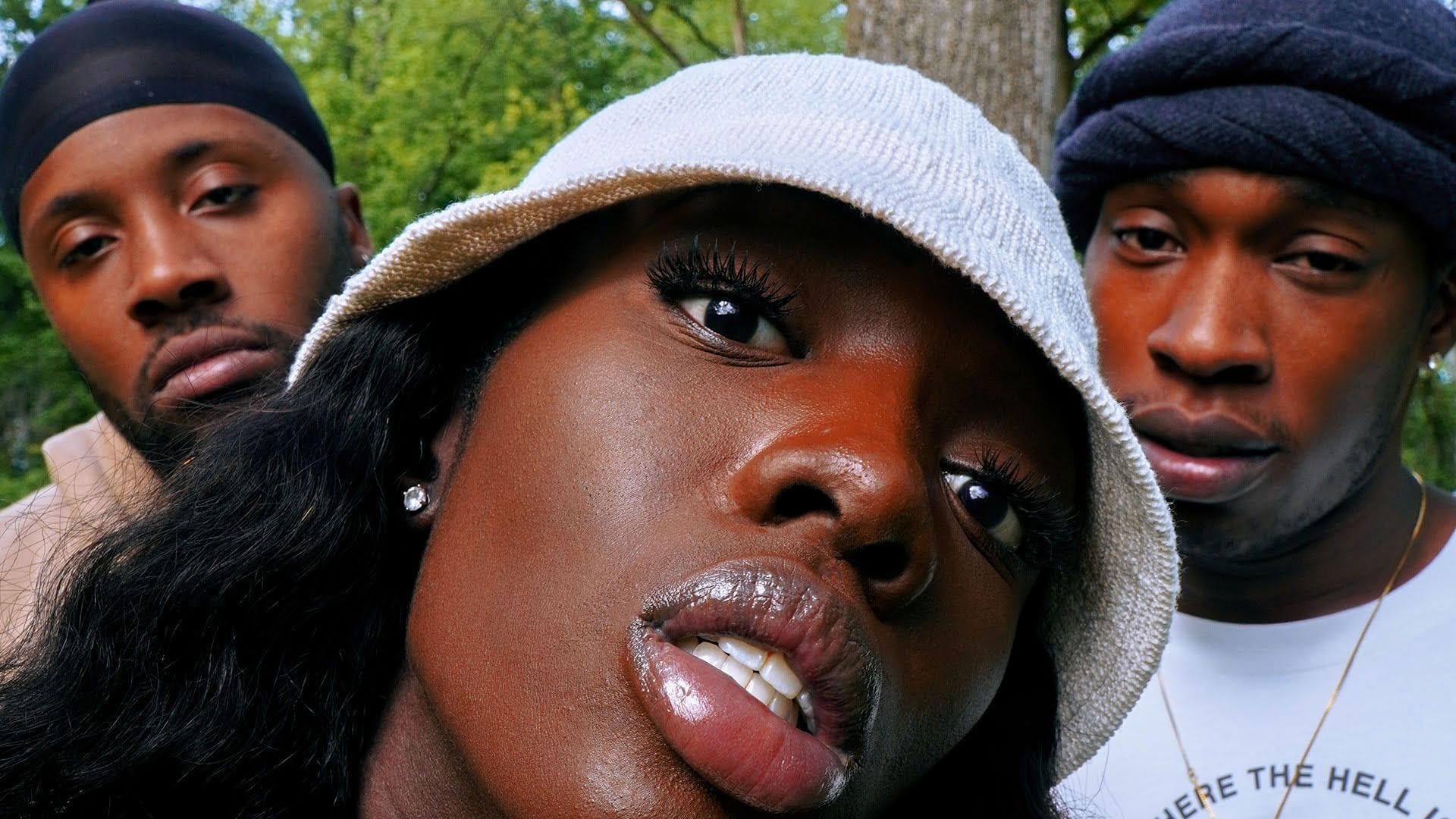 Lo Village pulls influence from everywhere. When I spoke with the trio—composed of rappers Kane and Charles Tyler, and vocalist Ama—over the phone, the amount of music we ran through was staggering: R&B, funk, dance, go-go, rap. The Maryland group takes pride in its ability to blend these sounds, creating a voice squarely in the center of their unique musical Venn diagram. In essence, they are their own rich genre.

They’ve always had a taste for musical adventure, but Lo Village felt a more stirring call to action during the emotional roller coaster of 2020. Inspired by the national response to Geroge Floyd’s death in Minnesota, Ama spearheaded the group effort to address the trying times through their music. They created their latest EP, Lost In America, and, according to all three members, their most focused effort to date. “We wanted to let people know we give a fuck and that we’re not just Black people acting like this shit’s not happening,” Ama declares.

Singles “Terry Crews” and “Out The Window,” in particular, are snappy and urgent. “Terry Crews” uses the titular star’s infamous Twitter gaffes as an example of how racism infects everything it touches over a cushion of soft synths and drums. “Out The Window” confronts “reverse racism” and critics of violent protests over a shuffling go-go-style beat.

The new sense of purpose coloring Lost In America has helped Lo Village refine their sound while retaining its musical wanderlust. “I feel like we’re performing masterclasses every time we put out music,” Kane explains of their genre-bending. It takes a special grasp of music to hop from the syrupy funk of opening song “Sick” to the off-kilter boom bap of “Run” to the spacey dance vibes of “Terry Crews” without causing whiplash. Lo Village makes this juggling act look easy. In fact, one might say they’re not even juggling so much as elevating all of the music with their sonic tricks. 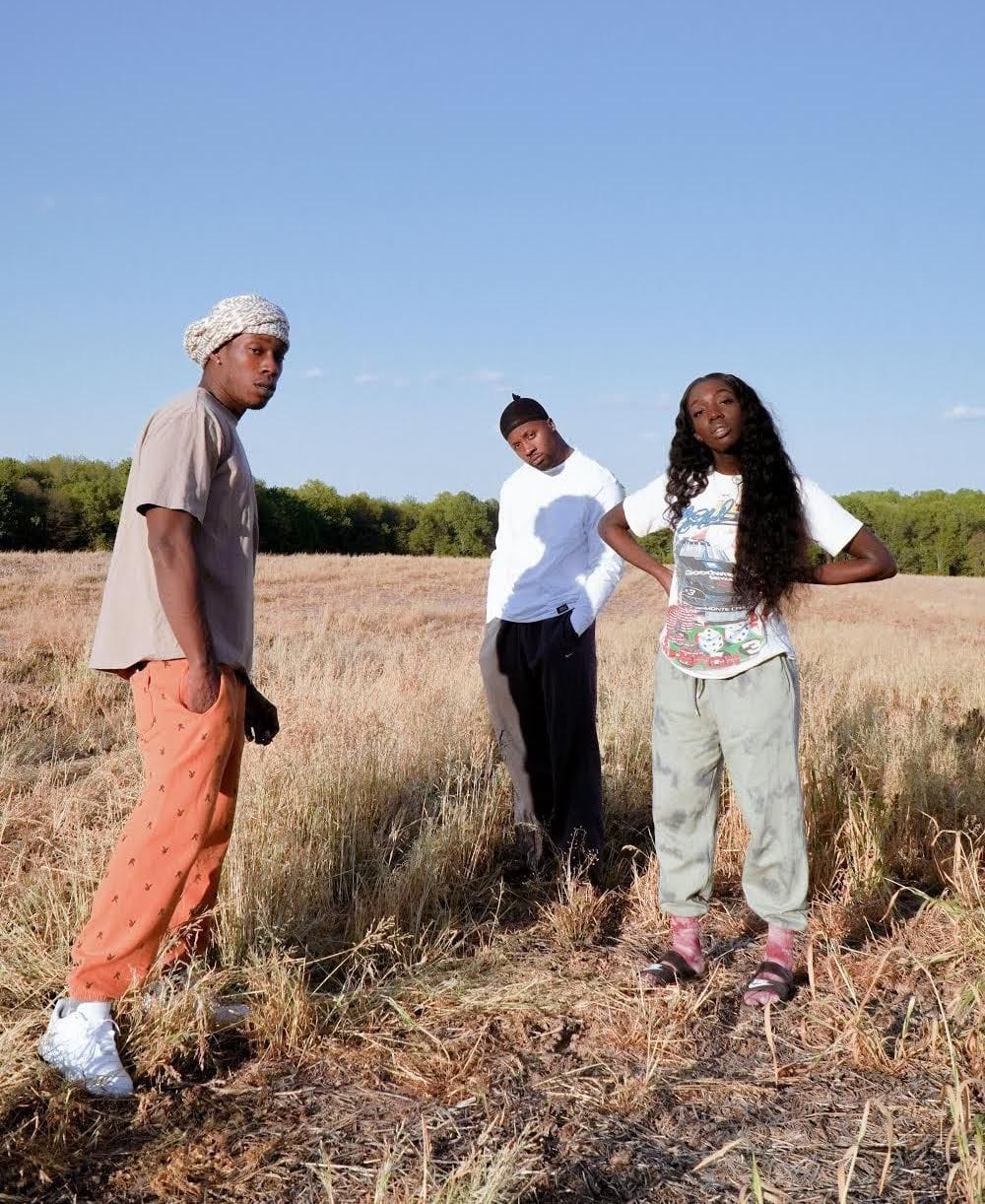 What music were y’all listening to while growing up in Maryland? Kane and Ama especially, since I’m aware you two are brother and sister.

Ama: Stevie Wonder, Michael Jackson, Anita Baker, Bob Marley, Elton John. Our parents were always playing music in the house, and it was always a lot from a young age. My mom was more on the cultural African music, but Dad was the more musically inclined one. He has good taste and showed me how to be able to like a variety of music. A lot of people have their one genre and stick to it, but I’m kinda all over the place. I know Kane is like that, too.

Charles Tyler: Coming up, my pops had a lot of old-school stuff. Not old like Afrika Bambaataa old but like Nas, a lot of Prince. His favorite rapper was Rakim, so he had a lotta that. My mom would listen to a lot of SWV and TLC. Music was always playing in the crib, and it was always something I wanted to do.

Kane and Charles, you two first formed Lo Village while in high school. What initially led you to each other?

Kane: Tyler makes music, and he was a year older than I was. I always wanted to make music, but I thought rappers were corny. Then I saw him do it, and that feeling went away. I said, “If he can do it, then I’ma do it, too.” His friends weren’t as nice as me, so we just dropped them and started the group [laughs].

Tyler: Yea, they weren’t as nice as us. Had to kick ‘em to the curb.

Ama, when did you first become involved with Lo Village?

Ama: I’m four years younger than Kane and five years younger than Tyler. I was 14 or 15 in the ninth grade, and they were probably early college years. They would be at my mom’s house, and I’d see them making music. I wanted to be a singer when I was younger, but I had kinda let go of that dream.

Seeing them make music, I became interested again off of that. My brother was showing me some of their songs, and I was like, “Wow, these aren’t trash.” Before, I was hesitant because I wasn’t sure if it was gonna be good, but when I heard it, and it was good, I kept paying attention. Over the years, they would need a female presence on a song or some harmonies done, and my brother would ask me how to put it down. I’d be adding things, and I was added to the group because I was basically in it. I officially joined the group in 2016 or 2017.

Your music runs the gamut of sounds from R&B to dance to funk but remains firmly rooted in hip-hop. Was it challenging to find a middle ground between all these sounds?

Kane: Yes. We all get what we’re trying to do. We gotta find that balance and that place where we can blend it and make it sound good. This is three people’s perspectives coming into one piece of music for a project. We have to talk about it more than an artist working by themselves.

Your earlier projects featured sample-heavy production, while your most recent joints are based around live instruments, almost like an audio collage. What inspired this change?

Kane: Wow, that was spot-on. A collage. Our earliest music was more like a talent show; we were just trying to showcase our talent, and it was all kinda scattered. With [Lost In America], there’s something going on in this country that we’re all affected by, and we needed to figure out how to address the urgency. I think we found our purpose with this one.

What would you say that purpose is?

Kane: We gotta speak up and use our voice. People like our music; why would we just be talking about bullshit when we could talk about something real? We grew up in this fucked-up world, and we wanna have kids and nephews and nieces, so we inherently know we need to make it better for them.

Lost In America doesn’t shy away from a perspective about the Black American experience circa 2020. How else has the current state of the world inspired the way you created this EP?

Ama: In May, we dropped “Comfortable,” which was just an individual song that had nothing to do with what was going on. The time we dropped that was around the time George Floyd had just passed, and there were a lot of protests going on. Kane and Tyler wanted to post the song to Instagram, and I had to be like, “Read the room” [laughs]. We shouldn’t be talking about anything except what’s happening.

They didn’t get it at first, but I had to explain to them the importance of social media and how important our platform is. We switched gears very drastically and immediately started working on [Lost In America]. We wanted to let people know we give a fuck and that we’re not just Black people acting like this shit’s not happening. I was influenced by Wale’s [Imperfect Storm EP]. He put it out quickly, and I thought that was admirable. The topic would be relevant no matter what, so I knew we needed to do something.

Kane: More bullshit also happened since when we wanted to drop it. The way things have played out has made me feel more confident in the process. This period of time is bringing a creative side out of Lo Village because I feel like this is what we were made to narrate. These times, specifically. We’re getting into the shits because we’re still growing and learning more about each other and the world.

Lost In America also reads as a sampler platter of all the different music you love. No two songs sound alike, but it all remains cohesive. Was this a conscious decision on your part?

Ama: It wasn’t necessarily on purpose, but it wasn’t on accident, either. We were already working on maybe two or three of the songs, and we had different ideas that got switched up as soon as everything started happening. In the past, we’ve never stuck with one type of vibe in a song. We never go back and make the same thing.

I noticed a strong go-go influence on closing song “Out The Window.” As artists from the DMV, has go-go been an influence on your music?

Tyler: It’s inevitable to hear that kind of music in our area growing up. It was a big part of the reason I got into music in the first place. On top of all the stuff I mentioned earlier, my dad also had a lot of Chuck Brown and shit as well. It was nice to have music that had that unique bounce to it.

Kane: The first time I’d ever seen a show was in college, but before that, a go-go was the first place you’d see that kind of live instrumentation outside of church. That’s my memory of it. Whenever we do shows, I always remember the go-gos, and you’re gonna hear a lot more of that in our music.

Ama: I’m glad you brought that up because it’s definitely there in our subconscious. I don’t consider myself the average type of singer, but I did listen to a lot of go-go growing up, like New Impressions and Backyard Band. With [“Out The Window”] specifically, we were definitely trying to go in that direction. Even a song like “Jefe’s House” is very influenced by go-go. We all listen to it, so it’s there.

Because of the various influences you work with, your music defies genre. Where do you feel Lo Village stands in an industry where genre-blending is more common than ever?

Kane: I feel like we’re performing masterclasses every time we put out music. I’m not trying to brag, but it is what it is. I think it’s gonna be more evident as time goes on, but we’re just getting started.

Tyler: When we first started making music, it was mostly centered around rap. We’ve been able to diversify our sound over the years while never straying too far from what started this shit in the first place. We’re always gonna deliver the bars.

Ama: We just always stay true to ourselves, for real. When I’m looking at the lists of cities listening to our music, we don’t get that much love where we’re from because people are listening to one type of thing that we don’t necessarily do. Our area will catch on sooner or later, but we’re gonna stick with what makes sense to us. This is what we know.