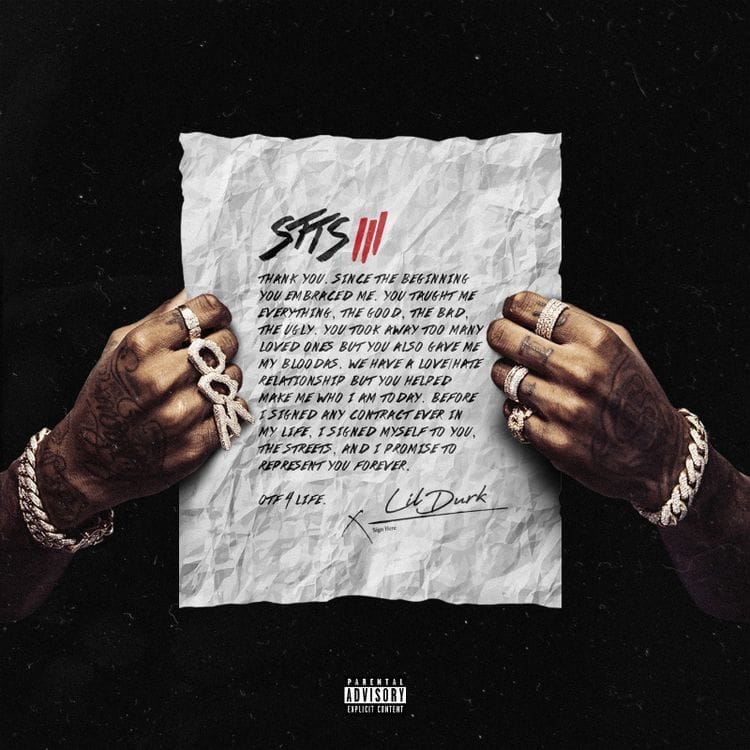 Melodic drill pioneer Lil Durk returns with the third and most heartfelt installment of his ‘Signed to the Streets’ series.

There is no drill music without Lil Durk. Breaking in 2012, with a subsequent signing to Def Jam, Chicago’s Lil Durk took the street anthem and gave it a fresh and melodic life. His writing was of the soul, with no details spared, and his energy from 2012 to present has gone unmatched. With his influence reaching everyone from Lil Skies to Gunna and Juice WRLD, Lil Durk is rightfully considered the father of a beloved subgenre. Started five years ago, his Signed to the Streets series features Lil Durk writing and rapping from his core.

Following his departure from Def Jam and a slow-down in his career, Durk is back with Signed to the Streets 3, an album dedicated to his roots and to all the neighborhood heroes who make his city — all cities — great. STTS3 is classic Lil Durk material. We get ripe pain music and struggle beside radio hits, and the bevy of melodies will leave even the most critical of listeners satisfied. Not to mention, the record comes with a star-studded feature lineup: Future, Lil Skies, Lil Baby, Kevin Gates, A Boogie and more.

This project is more than a return to form for Durk, it is a necessary revival and moment where he is reconnecting with himself and his fans. Press play to hear how Chicago’s neighborhood hero is moving music forward.

If you like what you hear, make sure to keep up with Lil Durk on Audiomack.