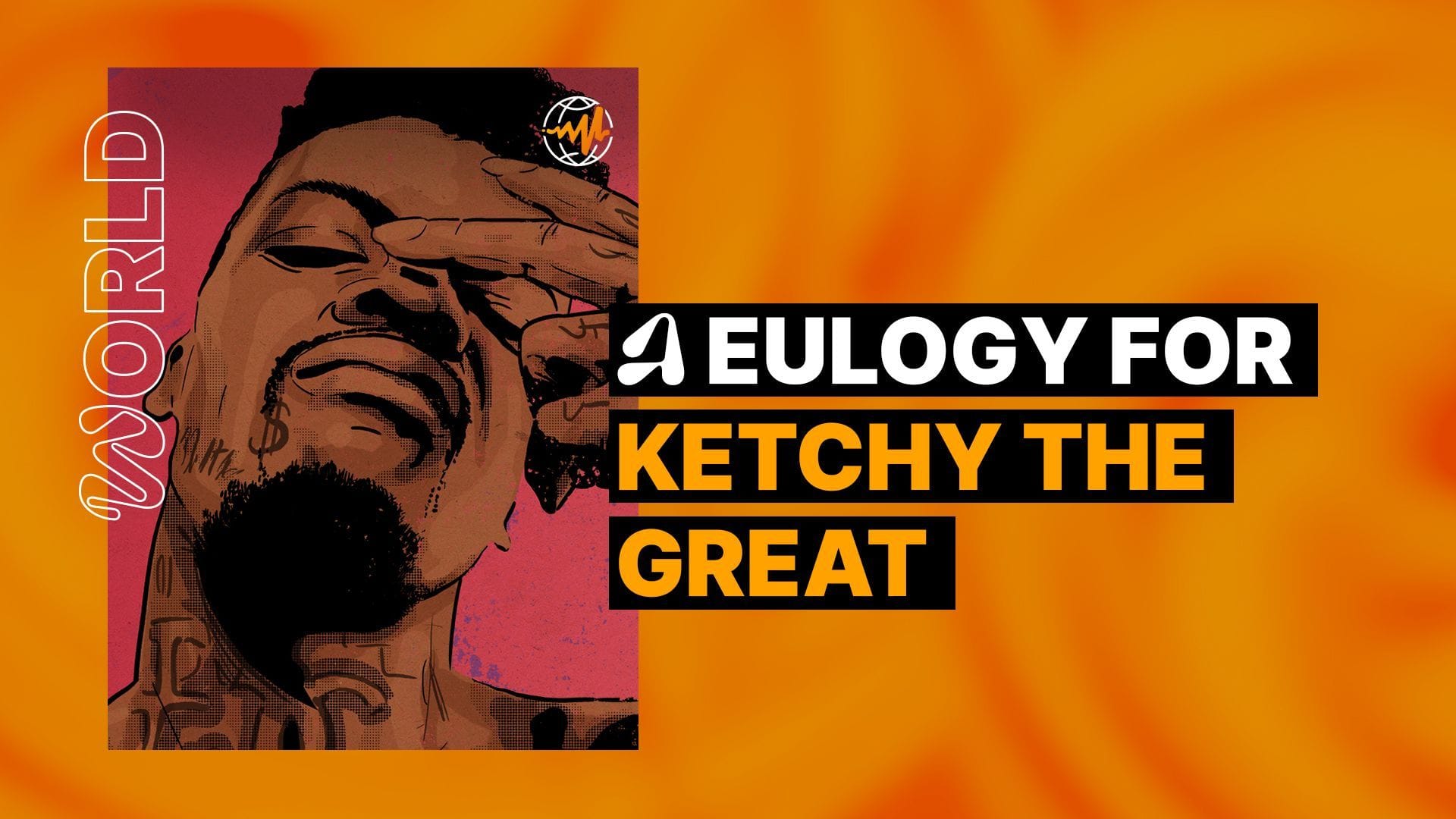 To know Ketchy the Great or to listen to his music was to understand the force of energy. The co-founder of the Stinc Team rapped like Blanka in Street Fighter, conjuring a spiky-haired perimeter of electric voltage; a freak lightning storm leaving sliced power lines snaking through the street; a machete wedged into a wall socket, a stick of dynamite lobbed into a nuclear power plant. Raw power. The type of chemical charge you can only be innately blessed with, or summoned through a duffel bag of esoteric drugs. Over a month later, it remains surreal to process the idea he is dead from a hit-and-run collision in Long Beach, in the pre-dawn hours of February 15.

An Eastside kid from Vermont and Central in South LA, Ketchy spent his early years in foster care. Skating as an early teen led him to befriend Drakeo the Ruler and his younger brother, Ralfy the Plug. By the time they reached high school, Jameon Davis became locally renowned as “Ketchup,” a master of the pin-drop, the reject, and the rest of the improvised jerkin’ dance moves that swept LA at the tail end of the 2000s. The videos remain on YouTube, and in the same way that The Pharcyde and 2Pac started as dancers, an atavistic hip-hop spirit connected Ketchy’s adolescent routines to his future in rap. He danced the way he would later flow: low to the ground but limber, full of rapid-fire twitch muscles and all-conference agility. His cadences and 360-spins defied gravity, a firehouse of wild motion. The beats were overpowered by his voice, an instrument as serrated and destructive as an electric chain saw.

By the dawn of the last decade, jerkin’ died; their crew was old enough to get driver’s licenses and the lure of fast money was too strong. Ketchy claimed he got kicked out of high school for beating up a teacher and stealing money from students. This was around the same time they formed their original crew, 2Greedy. Freestyling was a hobby, but the streets dominated their focus. Consequences arrived when cops arrested the near-entirety of 2Greedy, which led the majority to spend the next two years incarcerated. 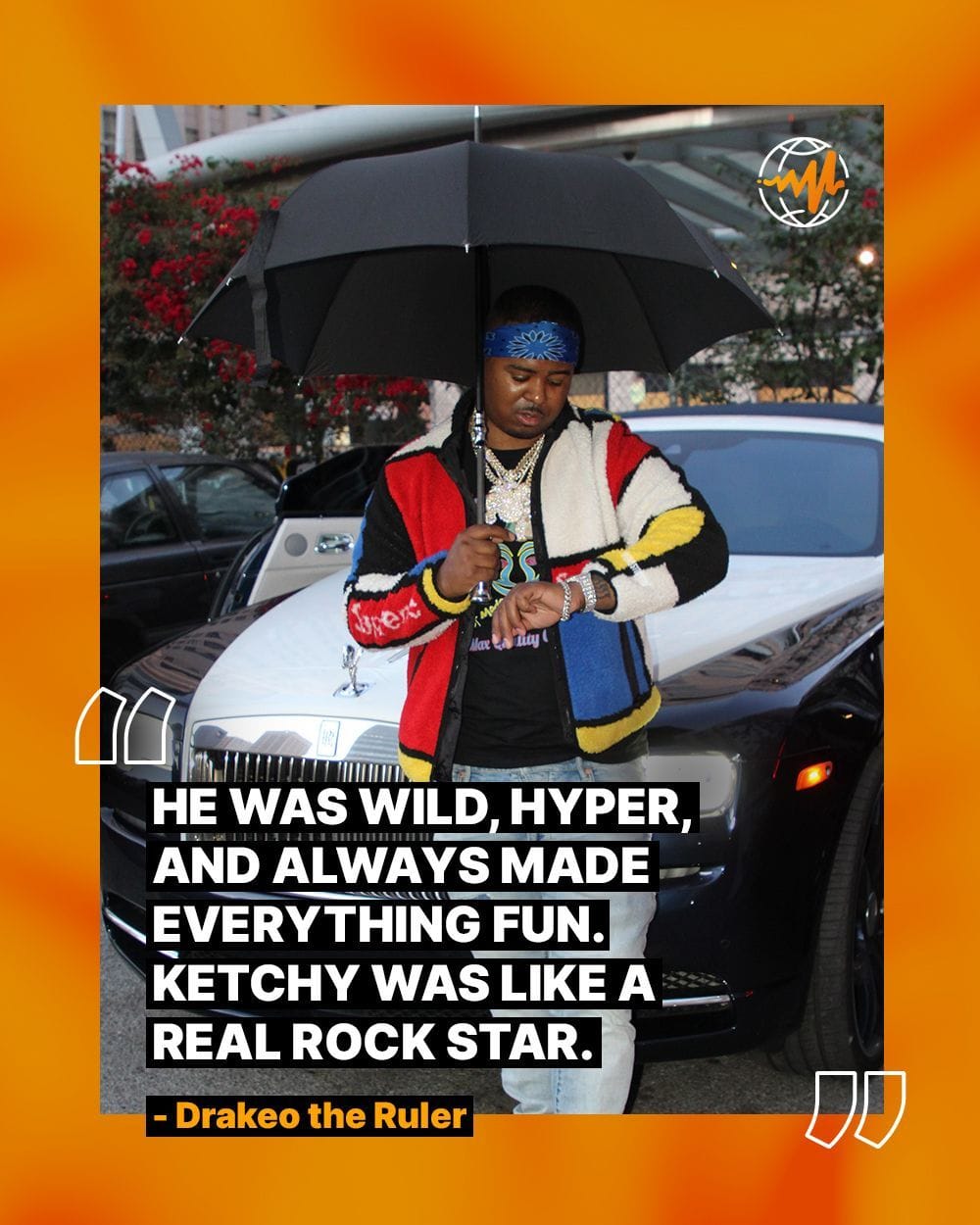 Drakeo remained free and developed a small cult buzz in South Central off his Nervous Music mixtape. The real breakthrough arrived in early 2015. Ketchy was now home, and Drakeo’s fledgling success allowed them to begin to imagine the idea of rapping as an escape route. Jerkin’ had given way to ratchet music, which too began to run its course. When Ketchy and Drakeo dropped the original “Mr. Get Dough,” it introduced the West Coast to ratchet’s menacing cousin, nervous music—what Drakeo described as what you make when you’re “driving around in a $100,000 car looking in the rearview to see if someone is trying to kill you.” If ratchet turned ominous, one-hand piano notes and rubbery drums into hedonistic function soundtracks, nervous music flipped it and left it bloodied onto the pavement. The same instrumentation was deployed to sinister ends: cryptic lingo and minor chords now hit like a new strain of LA noir.

Shortly after “Mr. Get Dough”’s release, DJ Mustard “remixed” it, which meant scrubbing Ketchy from the superior original version in favor of a slicker video with his 10 Summers artists. This was the video that blew up on the streets south of the 10 freeway and made Drakeo into a regional star. Ketchy was left behind, the overlooked and loyal capo, waiting for his moment to come. Over the next few years, nervous music became the default preset of 21st Century LA street rap. 2Greedy became The Stinc Team, a nod to their evolution from a flocking crew into the heirs of LA gangsta rap. But in an ironic twist, Ketchy, Drakeo, and Ralfy didn’t actually bang, which was common knowledge to everyone except the Los Angeles Sheriff’s Department.

In January 2017, the Sheriff’s Department raided Drakeo’s luxury apartment near the Los Angeles airport. They confiscated roughly a dozen guns, which they attributed to him even though he wasn’t in the building at the time of the arrest. He’d serve nine months for the weapons possession charges, during which time Ketchy and Ralfy emerged as legitimate forces in their own right. Watch the soccer-themed video for “If I Go Broke,” still Ketchy’s biggest solo hit, where he darts around the pitch like Kylian Mbappé, berserk and animated, doing headers and scissor kicks. Even a blunt the size of a forearm couldn’t slow him down. In any great rap crew, you need the wild card, the Ol’ Dirty Bastard, Witchdoctor, or Mystikal, growling, shouting, shattering the rules of convention. For The Stinc Team, Ketchy perfectly filled that void.

“He was wild, hyper, and always made everything fun,” Drakeo the Ruler says, eulogizing his best friend. “Ketchy was like a real rock star.”

During a fleeting period in December 2017, we got to see the full potential of this generation of LA rap. 03 Greedo, Drakeo, and the entire Stinc Team were free. Shoreline Mafia were the talented and reckless little brothers embodying the spirit of every blunted skate kid to ever loiter outside of an East Hollywood 7-Eleven. It seemed like the West Coast was about to enter another renaissance. The evidence exists in “Spaceship,” where Ketchy’s bone-saw hook eviscerates Ron-Ron and Beat Boy’s track. In the video, he’s crouching and bouncing up with his styrofoam cup, never spilling a drop, the id of the crew, starting the party like he came in with four kegs, eight handles, and three ounces. 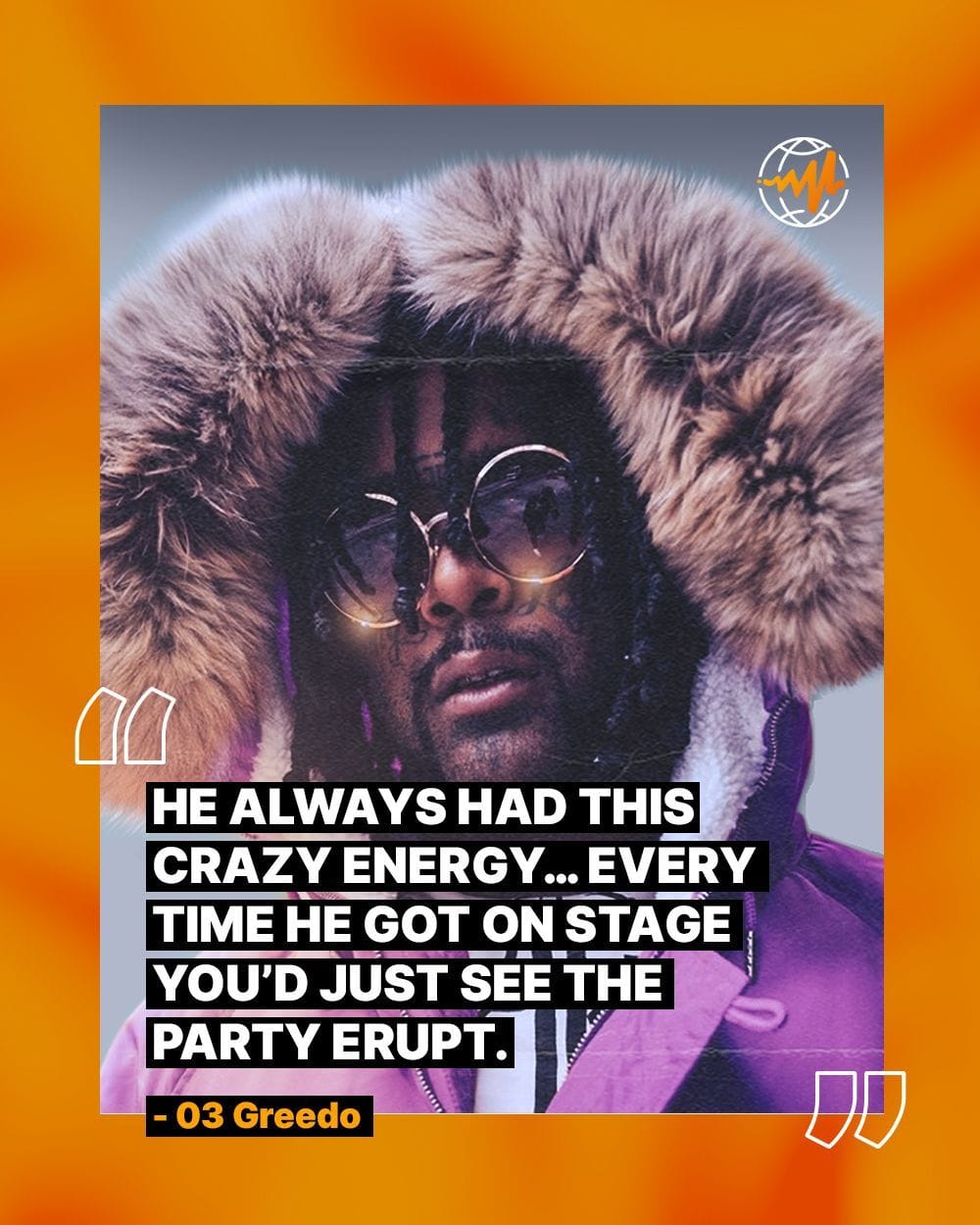 Around the same time, Ketchy fostered a close working relationship with 03 Greedo, the Watts polymath now serving a 20-year sentence in Texas for a non-violent drug offense. My favorite of their collaborations might be “Ballerina Macarena,” where Ketchy flips the Latin novelty dance into what I’d imagine they’d play if John Singleton rebooted The Nightmare Before Christmas in the valley of death. Ketchy sounds possessed, gurgling and snorting before the beat starts. When it drops he’s a demon seed, a reanimated corpse like one of those wights from Game of Thrones, swinging his voice like an Excalibur in every direction. Headbanging anarchy, which lays the foundation for Greedo to deliver one of his most lacerating verses.

“He always had this crazy energy and we were on the same page, slum lord ass n**s with cuts in our face,” says Greedo, who estimates that he and Ketchy have roughly 40 unreleased songs in the vault. “He really mastered the out-of-pocket but totally in the pocket flow. He was a cold character who would sneak in bars that had so much bounce and drop. Every time he got on stage you’d just see the party erupt.”

At the beginning of 2018, the Sheriff’s Department declared open war on the Stinc Team. Nearly every member of the group was arrested and thrown in the Men’s Central jail downtown. Wired snitches were placed in their cells. Gang enhancements were slapped on them to turn petty crimes into interminable bids. The “gang” in question was their rap crew. Out of anyone, the accusations against Ketchy might have been the most outrageous. Confiscating unused b-roll from a music video, the Sheriff’s discovered footage of a tagging crew offering spray cans to Ketchy and Ralfy on the shoot of “Right Decision.” It revealed Ketchy writing “Free Drakeo” and “Fuck 2Snitchy” on the retainer wall of a semi-abandoned industrial zone. According to the Sheriff’s and the Los Angeles County District Attorney’s office, this was “felony vandalism” and “intimidating a witness.” With a gang enhancement, it carried charges of 25 to Life. Ketchy eventually lost nearly three years of his freedom for what in any sane society would’ve been at most a $100 ticket.

Upon his release last fall, Ketchy locked himself in the studio nearly every night. He was exactly how you’d expect him to be from his music, an adrenaline shot for what would’ve been otherwise dull recording sessions. Always the life of the party, full of good-natured jokes, shit-talking, and tricky dance moves. Whenever I’d ask him when he was going to drop his next project, he would automatically defer to Drakeo’s release calendar. The loyal friend to the end. Always waiting his turn, finally able to realize his dreams after so many setbacks. Deals were on the table now. After so much anguish and persecution, it was really about to happen. Then Ketchy’s life was brutally snuffed out in a tragic accident, one of those things where trying to understand it only leaves you more confused. 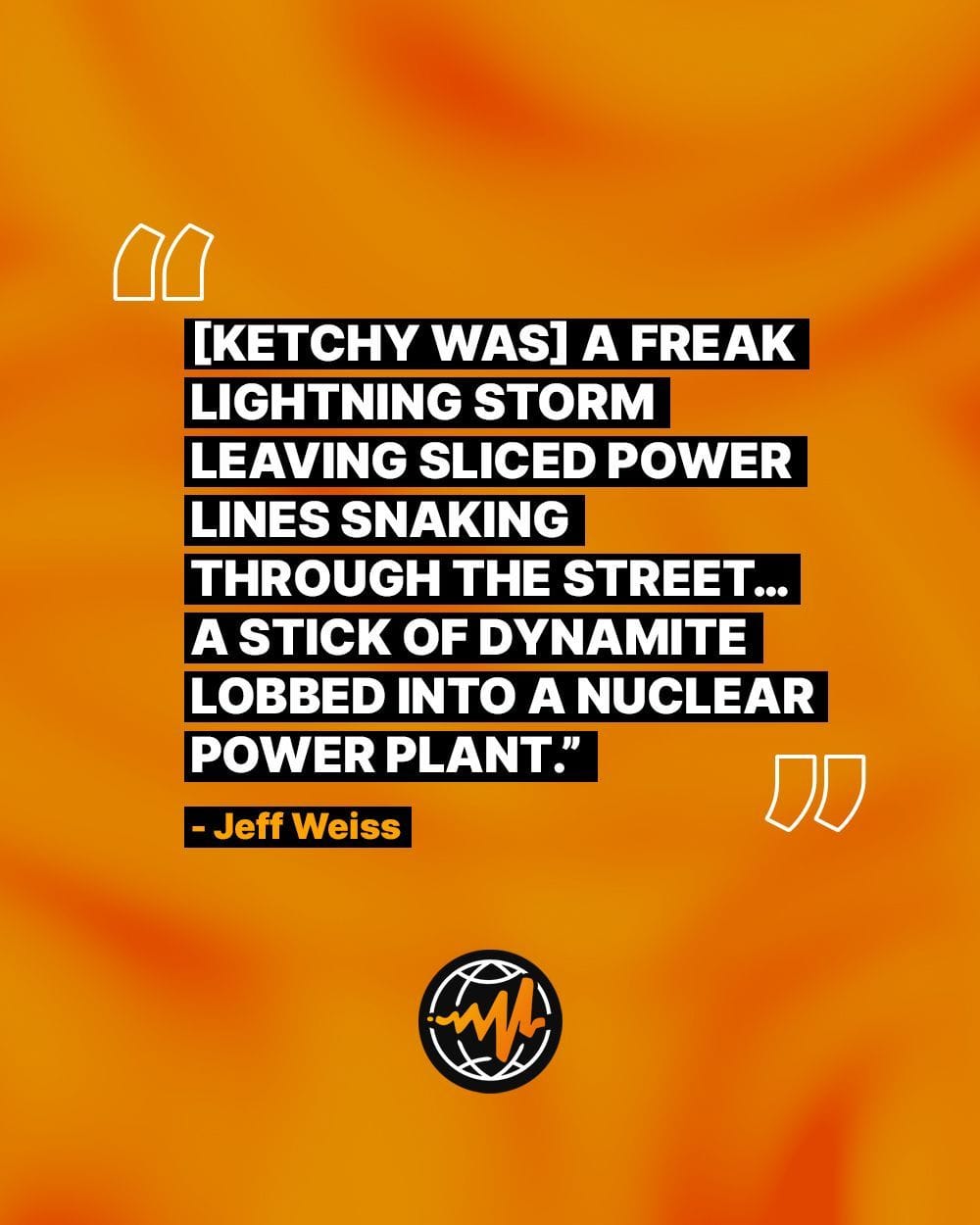 When I was much younger, the only thing about physics that ever made sense to me was the law that energy can’t be created or destroyed. For someone who always found little hope in the possibility of an afterlife, this offered a sliver of belief. Even if there was no benevolent heaven or karmic reincarnation, I could delude myself that all this kinetic chaos might eventually be recycled into something more than a fading memory. I’ve rarely returned to the idea since I was a cynical kid struggling to understand unknowable ideas, but in the wake of Ketchy the Great’s death last month, it keeps on floating back into my mind.

Ketchy’s absence still feels shocking and surreal. I’d much rather believe all his energy had to have been transferred or transformed into something else, and wherever it has gone, that will always be worth following.