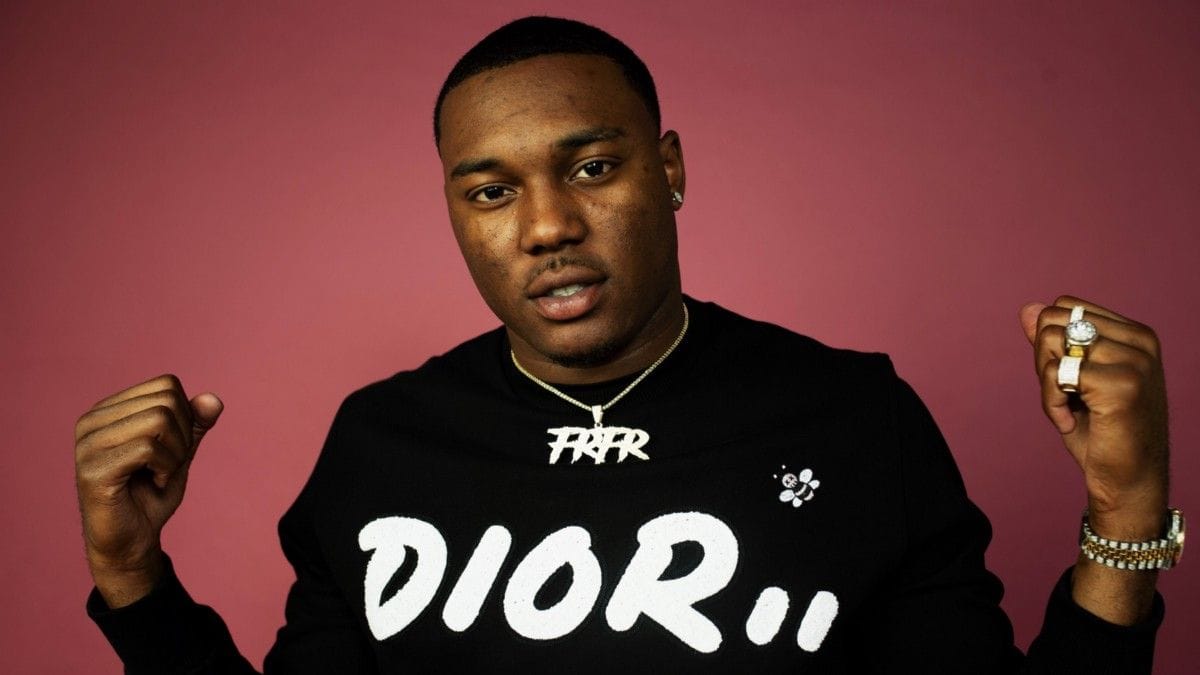 The Los Angeles rapper/singer has a new remix with YG, but that’s just the start.

Kalan.frfr may be part of a burgeoning Los Angeles hip-hop renaissance, but he is in a lane of his own when it comes to the music. Hailing from Compton and Carson, the former football player turned recording artist has been steadily building his name in the streets as both a singer and a rapper, building buzz independently with a potent mix of R&B jams and hard-hitting bangers. No matter his approach, Kalan always keeps it real.

Kalan’s focus turned to music in 2016 while wrapping up a scholarship at San Diego State, where he played defensive back. He struck gold not long after with “Fine Ass,” a bouncy, Auto-Tune-heavy single that started attracting audiences from up and down the West Coast and has since topped one million views on YouTube.

2018 brought the release of two projects delivered just three months apart: April’s Hurt EP — recorded over the course of one day — and July’s TwoFr, a bright, upbeat, and melodic project perfect for breezy LA summers. The latter also included another hit, “Right Wit It,” a laid-back collaboration with G Perico and Chris O’Bannon.

Both projects helped secure Kalan’s status as one of the brightest young talents in a West Coast hip-hop scene rife with talent. Making tunes specifically with the ladies in mind, it also doesn’t hurt the 24-year-old is a young heartthrob. Primarily known as a singer, every day is spent in the studio fine-tuning his brand of ratchet R&B, which he describes as “ratchet beats but with R&B harmonies.”

Nearly a year removed from his last project, Kalan is putting the finishing touches on his upcoming mixtape, 2 Hunnit Degrees. Audiomack caught up with the artist to discuss his new “Right Wit It” remix with YG, out today, the independent grind, his last words with the late Nipsey Hussle, touring with Shoreline Mafia, and more.

For those who don’t know, who is Kalan.frfr?

Why should people listen to you?

I give music a different vibe. There’s not really anybody making ratchet R&B music right now. Or tending toward women — that’s my specialty. That’s where I’m most comfortable. The women gotta love it. If the women like it, the dudes have no choice but to.

What part of LA are you from? 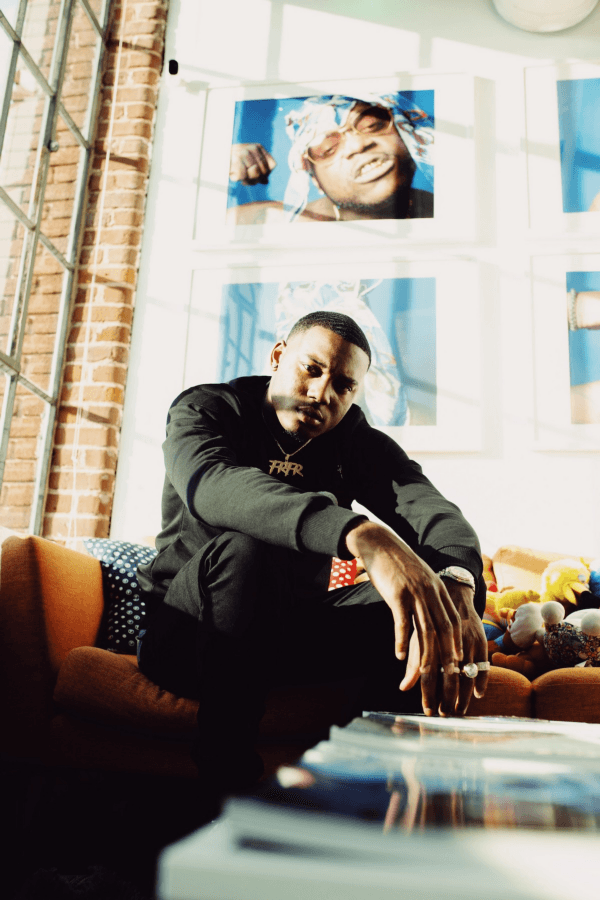 I’m from Compton, Carson, etc. I’ve lived all over LA. Everywhere I live plays a part in my story. I went to school right behind the Compton airport.

What were you seeing growing up there?

A lot. Of course all the bad stuff: people selling drugs, people getting killed, etc. But I’ve also seen a lot of good stuff. Richard Sherman [Seattle Seahawks cornerback], I went to the same high school as him. I got to meet Kendrick [Lamar]. Growing up in anybody else’s hood, it’s the same. Everybody has their dos and don’ts, negatives and positives. It formed me into the person I am.

At what point did you realize this music thing was for real?

Last month at my first LA headlining show at the Globe Theatre. It was nerve-racking because it was the same day as Nipsey’s funeral. I was nervous, but the turnout was amazing. It was my birthday too! It was a lot on my plate that day.

What were you feeling?

Talk about the Nipsey Hussle tribute you did at your show.

I played the last songs and talked about the experience I had with him. He actually DMed me the day he died. An hour before he passed away, he DMed me and said, “I like what you’re doing. Let’s make sure we get in the studio.” Crazy. I’m just like, “Man, thank you. It means a whole lot coming from you. I appreciate it.” He shot me his number. I was getting ready to hit him and somebody told me that Nip just got shot.

Yeah, it was wild. I was in Miami, too. We were getting ready to come back. I was gonna go to studio with bro, get it in.

What was Nip’s influence on your career?

Don’t give up! No matter what. You’re going to get hit with all kinds of trials and tribulations but whatever it is, look for what could be the best situation for you. If you give it 100%, then it’s a winning shot for you. Nip taught me it’s bigger than music. It’s not just about music, it’s how you influence people, how you can touch somebody. I got my college degree to work with children with disabilities, so I want to make sure I do something with that.

What was the inspiration behind your name?

When did you pick that up?

My partnas used to always be like, “Keep it real, keep it real!” ’Cause I used to freestyle. I’d freestyle about everything that’s going on right there. I’ma keep it real, frfr.

Do you still freestyle everything?

One of my downfalls in freestyling is remembering what I said. I might make three or four songs in a session, and can’t recite them. I gotta listen to it 10 times so I can know it.

“Fine Ass” has over one million views on YouTube! How does that feel?

Good! It’s gonna get the recognition it deserves, but the record is bigger than the video. Because if you look at the numbers, it doesn’t match the reaction from outside, the actual people and the embrace that I get for it. I go all over, up and down the West Coast and they sing it verbatim. Word for word. I can turn the music off and they’ll sing it with me. Every show I’ve done within the last three or four months, they’ve sung it word for word.

Talk about linking with Chris O’Bannon & G Perico on “Right Wit It.”

It was dope. I already had the beat. I wasn’t working on ratchet music at the time, but I’m like, “Man, this one gon’ go.” We went into the session and did it. The day after, I met G Perico. I played it for him, and he’s like, “That shit hard! Let me hop on that.” I’m like, “Fasho! You want me to send it to you?” G’s like, “l’m finna do it right now!” He did that shit right there in the studio within five minutes.

I actually found out about you on G’s Guess What? EP (“Play Wit It”). Was that recorded after?

Yeah, that was after! Shit, I was on my way to the airport. G was like, “Where you at?” I said, “I’m finna go to the airport, but I’m leaving Hollywood.” He said, “Stop by the studio real quick, I’m finishing an album.” I ran in, we did that shit in 10 minutes. [Laughs] It was quick.

If we ain’t not all on the same page, we can’t get nowhere. It’s dope that a lot of the artists are working with each other.

You dropped TwoFr last year. What can we expect from you next music-wise?

I got a whole ‘nother project coming. I got [the “Right Wit It”] remix with YG. It’s gon’ be crazy.

What’s the dynamic in the studio with YG?

He works fast! It’s cool, it’s a vibe. He gets in his zone and he do his thing.

What three things do you need in the studio?

Life Savers Gummies, that’s my favorite. [Chuckles] We doing this whole water that’s good for you thing: we drinking Essentia water. Just good people! If I’m gonna be by myself, I work a lot faster. But if I’m with people, I want it to be a good vibe. Good energy in the room.

You said you’re signed with an indie label (First Class Entertainment) now. Are you hoping to sign with a major label at some point?

Nope, not really. The independent grind is crazy, but it’s dope because we put it together on our own. I want whatever is gonna be the best outcome for me and my team. If we can do it on our own, then we definitely gonna do it on our own.

Do you think there’s value in signing with a major?

Definitely, when you don’t have everything under control. There’s people who have done what you’re trying to do before, or exceeded in something you haven’t exceeded in. Using a major would be dope but if you can get the stuff figured out on your own, then you don’t need them.

What would you look for in a label to partner with? 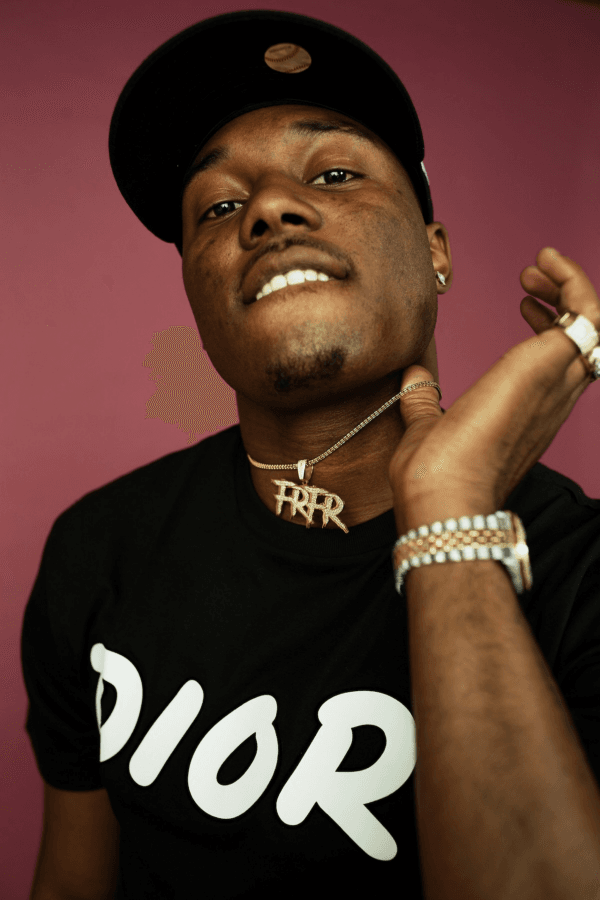 Right now, I can’t really tell you because we’re figuring it out day-by-day as a team. We know stuff is missing, but we don’t really know what we’re missing. With a little bit of effort, everything is accessible. I’m not looking for much. I got a solid team so everything that gets brought to the table has been beneficial.

What’s the most difficult part of managing an indie music career?

Not knowing what’s gonna happen next. [Laughs] Everything is in the air because you hire these independent contractors and you never know who’s actually who. That sense of security, that safety net—that’s really where the problem is.

You were on tour with Shoreline Mafia. What were some of the biggest lessons you learned on the road?

Make sure you pack right because it gets cold. [Laughs] Make sure you take care of your health. Make sure you’re eating right. If you’re not eating right, you’ll get sick. The whole bus gets sick and that’s nasty. Nobody wants you walking around everybody coughing all day. Just take every show seriously. You never know who’s gonna be watching or who’s in the crowd. Everything’s important. It’s your business.

You’re known for your R&B sound, but “Hot n Ready” showcased how great a rapper you are if you want to be. Will we be able to hear more from Kalan the rapper?

Definitely. I can’t give out nothing right now, but there’s gonna be a lot more rapping. All kinds of stuff — my music’s real diverse. You never know what you’re gonna get.

What advice do you have for an aspiring Kalan.FrFr?