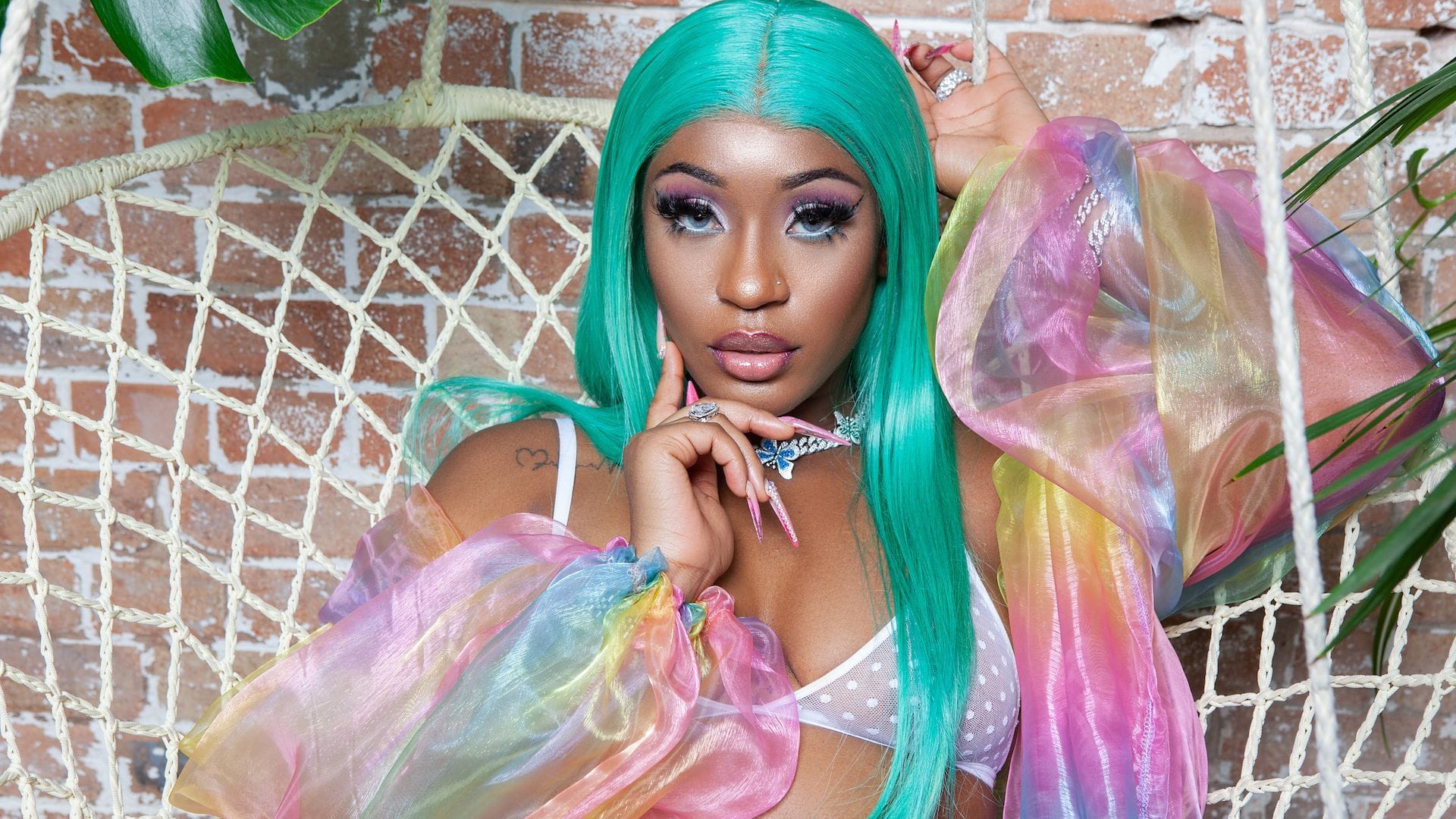 Born Vanessa Mahi, Ivorian Doll is the self-proclaimed “Queen of Drill.” Commanding an army of fans appropriately called the Dollz—which has been steadily increasing in numbers since 2017—her potent and gritty offering on drill music has garnered attention from peers such as Tinie Tempah, Mr Eazi, and Iggy Azalea across social media. She’s also received looks from defining British media platforms, including GRM Daily and BBC.

Despite Ivorian Doll’s outsized personality, solo success has been a more recent reality. The German-born and London-raised rapper began her music career as part of a duo with Abigail Asante. Under the moniker Abigail x Ivorian Doll, the pair ventured into the then-simmering UK offshoot of drill on a whim. Their debut song, “The Situation,” was spontaneous, according to 22-year-old Mahi, and, to this day, misunderstood.

“Me and [Abigail] made that song as a joke, but we never released it anywhere,” Ivorian Doll admits. “When we felt like the song was needed, we kind of, let me be honest: we seized an opportunity. We made people think it’s something that it wasn’t because we were trending.”

Released on December 28, 2018, “The Situation” arrived weeks prior to Headie One’s historic “18 Hunna” release, which went on to become the highest-charting drill anthem in British history at the time, peaking at No. 6 and helping create a foundation for drill’s inevitable rise. Simultaneously, Abigail x Ivorian Doll stood knee-deep in viral fame across Snapchat and Twitter, many praising the potent and boastful record within hours of its visual and audio unveiling. 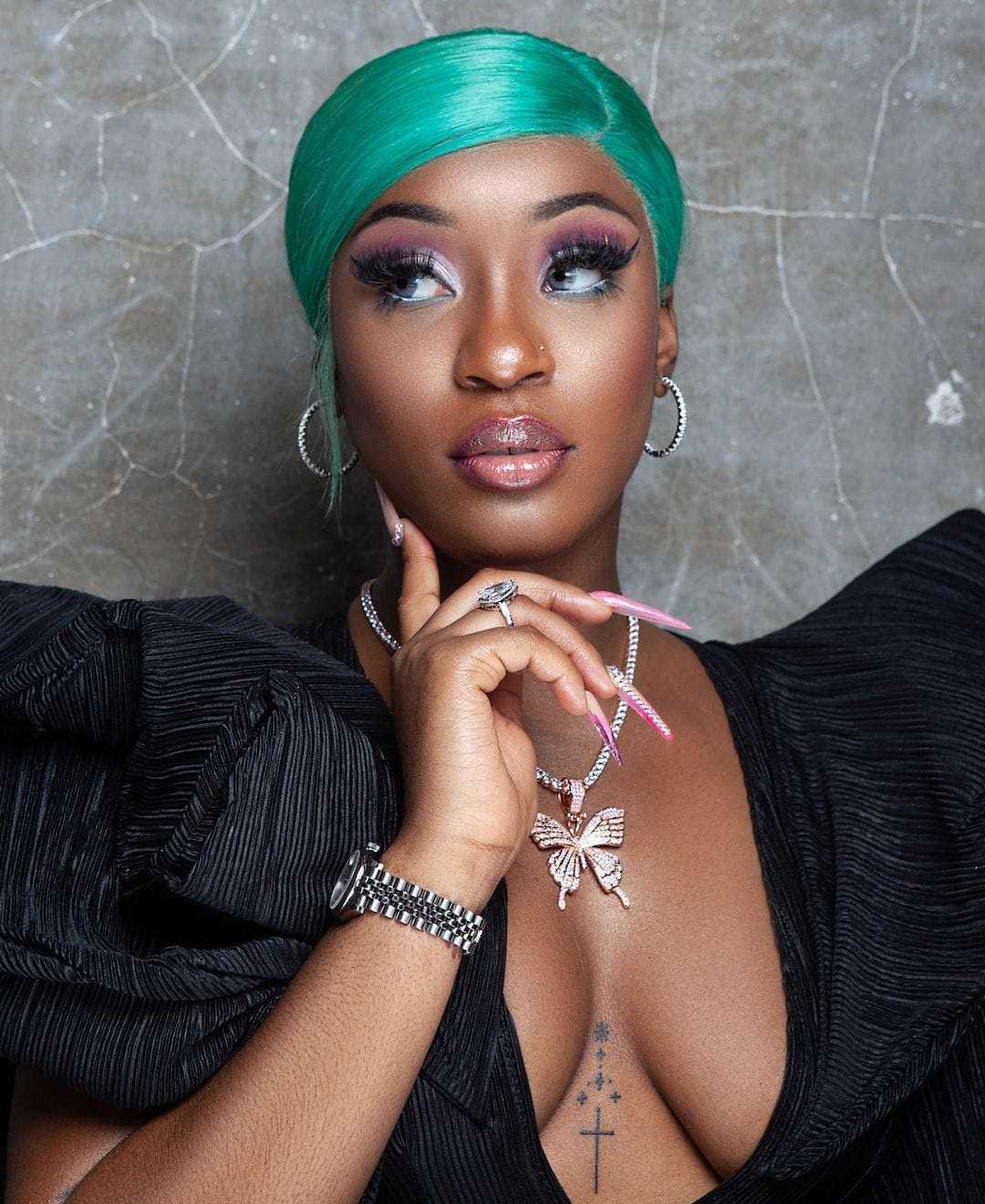 After strong encouragement from peers and friends, the duo followed up with singles “Spare Me,” “Bouji,” and “Snapchat,” all of which amassed the group a cult following throughout 2019. For Ivorian Doll, however, aspirations to go solo soon crept in, ultimately leading to a separation at the end of 2019. Ivorian Doll credits a combination of factors for the split, the first being her star sign.

“I’m a Sagittarius. We’re very much go-getters by any means necessary.” Ivorian Doll says, half-laughing, though her tone shifts to serious as she continues, “I just felt like I was putting in a bit more work. I always wanted to go to the studio… [The duo] just wasn’t working for my personality.”

Ivorian Doll capitalized on the birth of her solo career by releasing the braggadocious “Queen Of Drill” in December 2019. On the track, she revels in remaining tunnel-visioned and being an undisputed “bad bitch.”

“It was strange to have such a big statement track,” Ivorian Doll admits. “But do you know why I did it? Because I felt like I was the only one on my level. No one’s gonna say I’m not the queen. No one had a problem when I released it.” 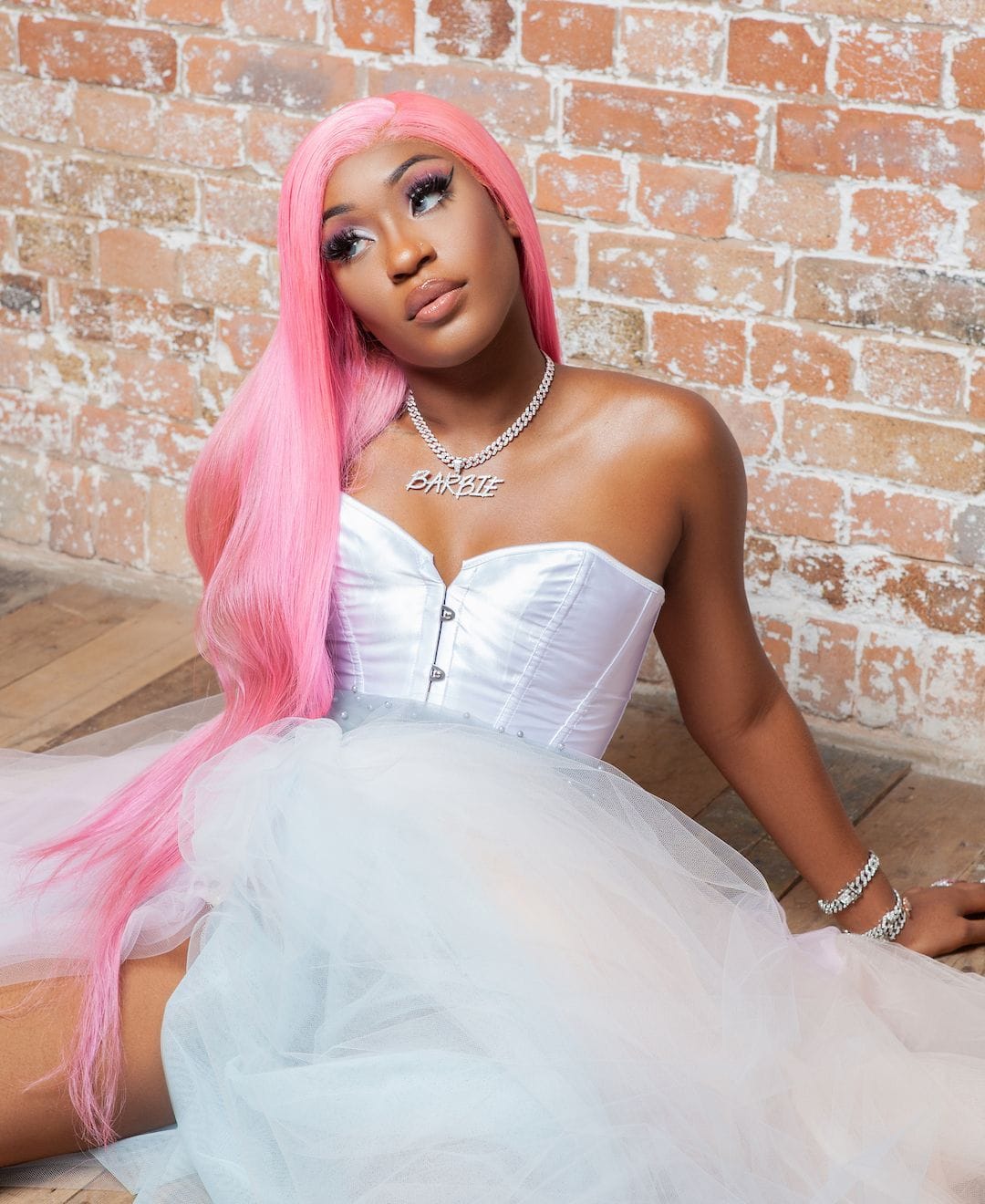 The knack for crafting frank, tongue-in-cheek singles stems from Ivorian Doll’s adolescence. Realizing she could write songs throughout secondary school, she utilized this skill to aid friends during trivial rap battles.

“We used to beef [with] other schools and send fake diss tracks,” Ivorian Doll says. “It’s funny because I was an A+ student in English, so I used to write stories, and I’m good at analogies. It all comes together when you apply this to rap. I would write lines like, ‘I’m sweet like bubble gum.’” She chuckles as she shares her appreciation for her natural ability. “I never thought the writing and lessons would come in handy one day, but it did.”

Ivorian Doll’s latest single, “Body Bag,” is even catchier. Her vocals are more animated, and the hook is both matter-of-fact and easy on the ears, for which Ivorian credits her team.

“Hooks, for me, I struggle with,” Ivorian Doll admits. “One of my friends came in and helped me with that. Before, I’d write whole songs, forcing a hook, and the song wouldn’t go anywhere. Now the songs sound better.” The team-first approach has helped Ivorian Doll progress in flow, articulation, and writing. She agrees without hesitation, saying, “I remember I mostly did the ‘Rumours’ hook, but ‘Body Bag’ is when I noticed the change with having the team. You work together, and it makes things sound better.”

Ivorian Doll’s collaborative spirit extends past her team toward the other women responsible for rap’s female renaissance. That includes other “Dolls.” (Ivorian’s stage name arrived at age eight and predated any industry trend: “ I was looking for a Facebook name. My friend said to me, ‘Why don’t you call yourself Ivorian Doll? You look like a doll and you’re from Ivory Coast.’) She regularly interacts with Asian Doll, who shouted her out on Twitter earlier this year, and has an upcoming collaboration with New York’s DreamDoll. Further afield, the artist looks to follow in the footsteps of Saweetie and become a multi-dimensional brand.

“For me, I want to be a mogul and a businesswoman,” Ivorian Doll says. “I’m thinking of global-scale projects: clothing lines, books, hair companies. Ivorian Doll is the umbrella with so many things underneath that. I’m in this for the long run.”

Ivorian Doll’s persistence has seen her score lucrative placements across the year. She’s confirmed as an act for 2021’s Rolling Loud in Portugal, and was part of one of the first virtual-only festivals in the UK this year when the annual Wireless Festival shifted its agenda due to COVID-19. Ivorian’s VR set was positively electric. 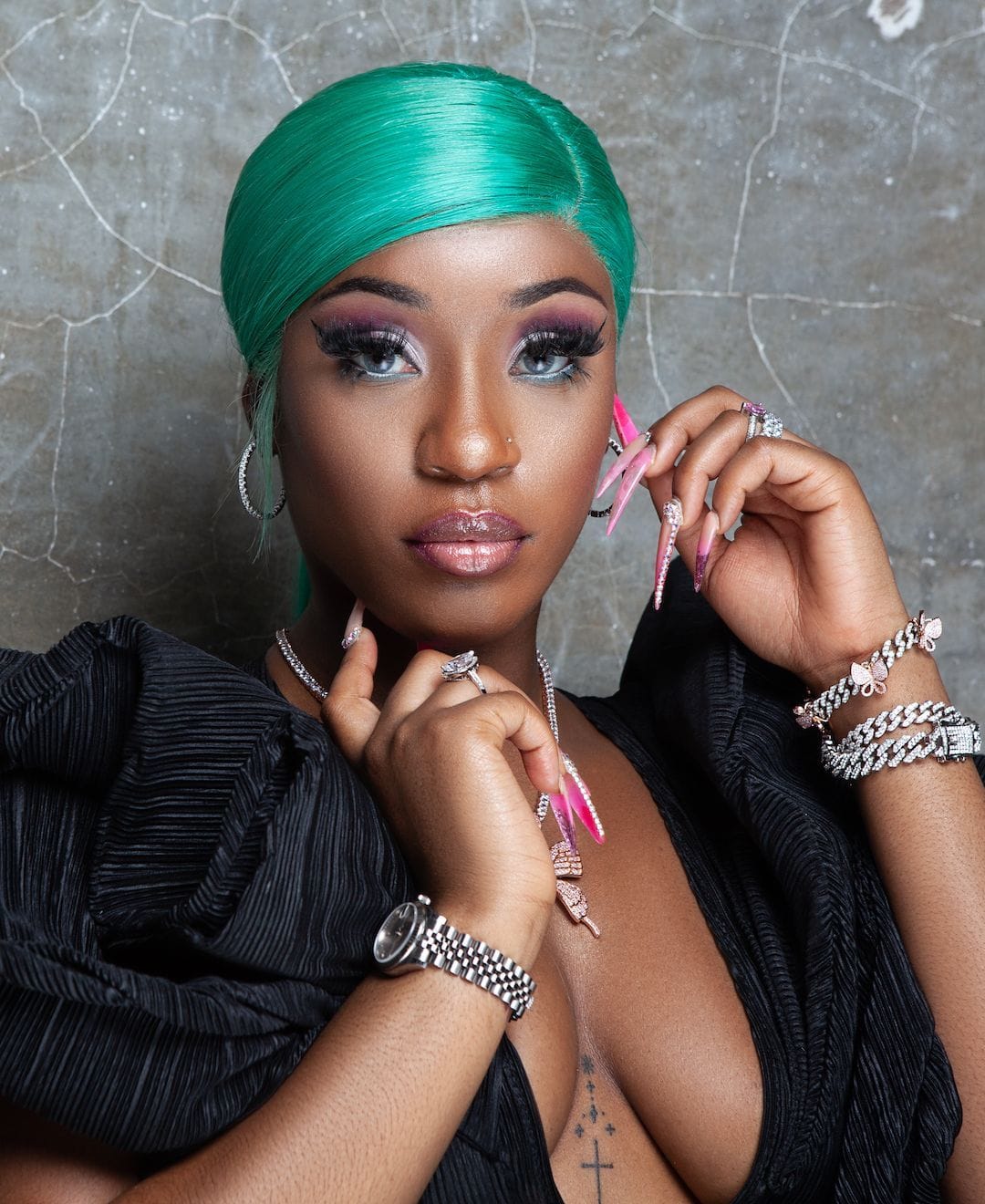 “In the UK, there’s almost a fear of doing the most,” Ivorian Doll says. “One thing about me is, as a viewer, I don’t go to concerts to watch people just stand there. I want to do the things I wish I saw in the UK. I want to be global, and I know what I’m competing against to get there.”

Ivorian Doll has a 360-degree view of her next steps, which includes many shifts in sound. She reveals her upcoming EP, Drill Print, will feature two songs—which are currently placed as the penultimate and final songs on the tracklisting—teasing her departure from the UK drill genre.

“Nicki, Cardi, Megan Thee Stallion—that’s the type of sound I’m heading into now,” Ivorian Doll says. She has been strategically waiting for a moment to experiment with wider genres. “I didn’t want to just change straight away. I want more, a variety of sounds, different inspiration.”

Despite Ivorian’s impending evolution, she concedes she will always be the “Queen of Drill.” “The title still stands,” she says. “The female drill-print, the female in drill, has been created. I was [one of] the only ones. I was amongst boys, and no one was doing it.”

As Ivorian Doll readies her geographic and sonic expansion, she’s content with the contemporary space in drill for women she’s helped shape. “All the [drill acts] were men when I first started, and they were not taking [women] seriously,” she recalls. “It felt like a lads’ football club. I felt weird. They were sexist. Now, female drill acts are [becoming] more accepted. I’m happy to be a part of that shift.”