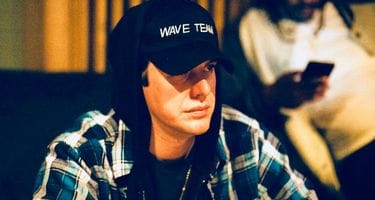 Harry Fraud is a team player. After breaking into the record industry, thanks to early work with Bronx rapper French Montana, the New York-based producer has become well-known for his full-length collaborations. He’s helped rappers from Action Bronson and the late Chinx to Curren$y and Smoke DZA bring their visions to life with quality beats for over a decade.

As 2020 draws to a close, Fraud has shown no signs of slowing down. He and Curren$y have released two more projects this year—The OutRunners in July and The Director’s Cut in September—and he and California rapper Larry June’s first collaborative effort, Keep Going, saw release in early October. Artists old and new continue to flock to Fraud for reliable sounds.

Use doubt to your advantage. “If you ever get to the point where you think you can’t make a bad move, that’s when you start losing. I don’t know if ‘insecurity’ is the right word, but I think having a little bit of doubt pushes you. It’s all about how you harness it. Anybody that’s great at what they do doesn’t stop learning.”

Don’t make beats in a vacuum. “I was never a guy that was making beats in a vacuum and sending beats here and there. Even with French [Montana], which I would consider being my ‘big break,’ I was his producer from the start. He was running me through the wringer. He obviously had more experience and more at his fingertips, but for whatever reason, we were locking in like that.”

Don’t overlook a good spark. “I look for mutual respect. That’s usually what gets you in the room together. Once you’re there, it’s so cliché, but a spark. A kind of realization that there’s chemistry. Fortunately, now that I’ve been doing this for a while, people come into working with me with that in their mind. Not necessarily that we need to do a whole album, but that I’ve proven I can put a palette together for them to paint a picture.

“With Curren$y and Cigarette Boats, which people consider to be one of my best collaborative efforts, he came into the studio with Smoke DZA to do a feature or something and we did that. Then, I played him two beats, and he said, ‘I need those,’ and by the time I played him the third, he said, ‘Oh, we need to do a whole album.’”

Develop an aesthetic. “Cigarette Boats is made up of the first five beats I ever played [Curren$y]. Literally. It’s funny because we have conversations now and at that time, we didn’t realize what we were doing. Now, with The OutRunners and Director’s Cut, we’ve developed an aesthetic. We’ve made mistakes, but sonically, we felt our way around and now we know what works. Now when we approach it, it’s way more conscious, and way more deliberate. We built that up.”

Learn how to take criticism. “With French, I learned not to get frustrated and to not take criticism as a negative thing. It’s like we were saying at the beginning a bit, to let it push you. The first time French and I were going through beats, the guy made me play him 50 or 60 beats. I didn’t know him like that at the time, so I don’t know that French will run through 150 beats in a studio session. In my mind, I was wondering if I was trash.”

Actions speak louder than words. “French also showed me the power of self-belief. This is a guy who had everything against him in and out of the industry. He believed and continues to believe in himself at such a high level that he was able to manifest something so great. I feel like I did the same thing. I was able to manifest what I saw for myself. Action is everything, man. You can talk about something forever, but it’s just talk.”

Go with the flow. “One thing about Spitta is he keeps you on your toes. You have to be able to go with the flow. Like how [The OutRunners] happened: It’s four in the morning, I’m passed out on the couch, and my FaceTime is going off. I woke up at 4:30 to get in the bed, saw that it was this guy, so I hit him back, and he was like, ‘Oh man, I just did the next album.’ Two weeks later, it’s out. A lot of producers and artists, in general, get in their own way and if I had tried to hold onto the baby too tight, it might not have happened. It’s hard to explain, but he’s just so talented, and you just gotta be able to go with the flow.”

Build a trustworthy reputation. “Putting an album together is like Tetris: you gotta get the blocks to line up and they unlock, and that’s how it is with Spitta. You gotta send him five or seven [beats] in a row, and that might be an album. I might text him 100 beats over a year, but it’s when I send the five to seven that line up, and that’s a project.

“I appreciate Spitta because once he records his vocals, he lets me arrange, mix, and do whatever I need to do because he trusts me to bring the vision home. As a producer, you appreciate that so much. And it’s the same with me. I trust him to do what he needs to do, and he never gives me a problem or pushes back.”

Always be prepared. “Everyone’s different. Someone like French might want you to come into the studio and cook something on the spot with him, which I’m always happy to do, but I’m big on prep. I can’t give Spitta the same beats I’m gonna give to French, I can’t give those to Benny [The Butcher], and I can’t give those to Larry June. I like to be prepped, locked, and loaded with a 10-clip that I’m proud of and confident in. Even if none of those beats gets used, it shows the artist I’m not here to waste your time or fuck around. I’m here to kill.”

Choose your partner(s) wisely. “If you know this is somebody you’re gonna do a project with, choose the person you know is gonna give you as much as you give them. The reciprocity is so important in creating with someone. Put your faith in somebody who will go as hard as you do or you’re gonna feel resentful.”