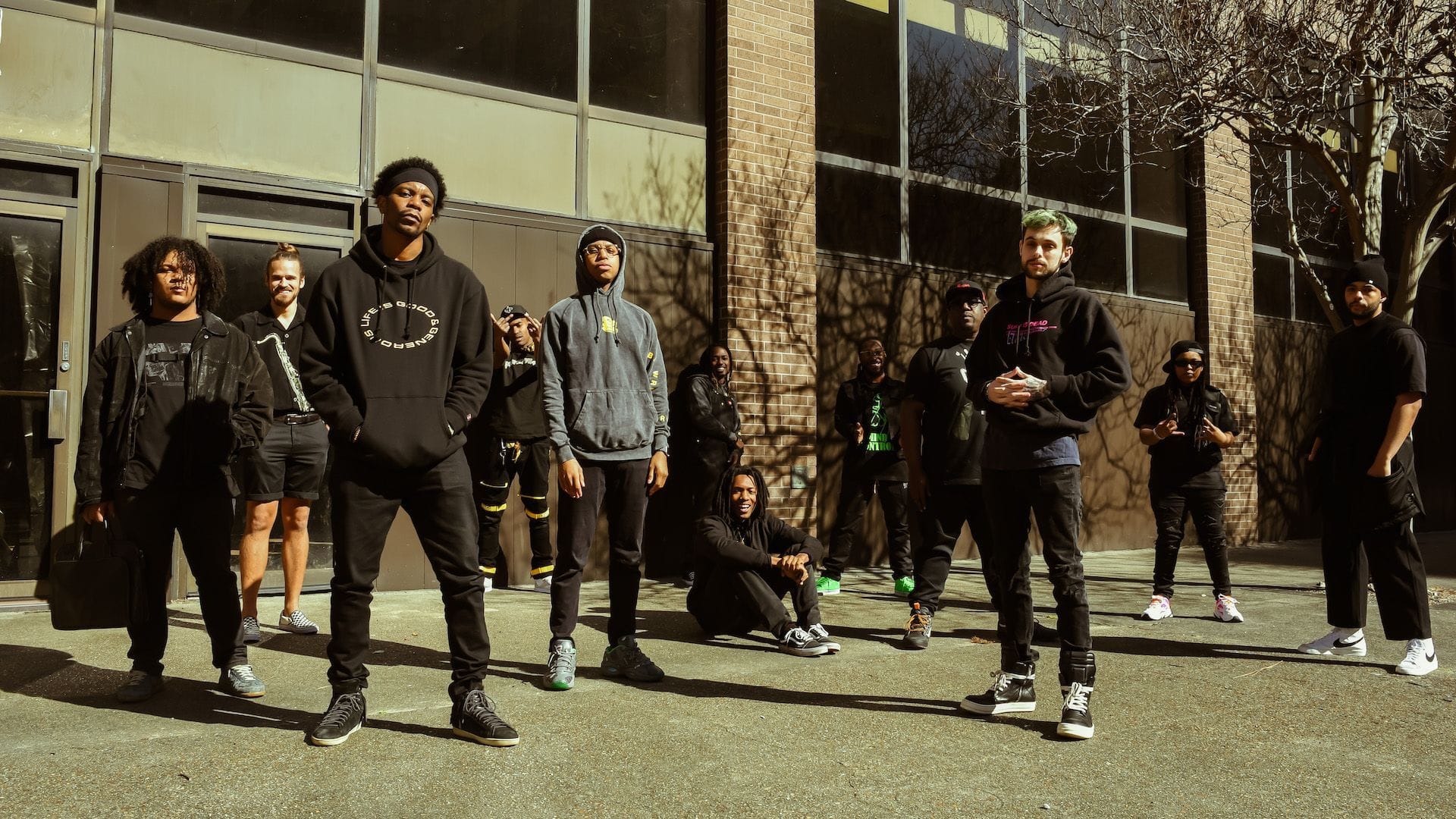 Music is quite literally built into the city infrastructure of New Orleans. Our airport is named after a musician—Louis Armstrong. There’s a Music Street, a Tuba Fats Square, and the Musicians’ Village. Yet when it comes to a music-business infrastructure, there is a dearth of resources.

Enter: New Orleans rapper Pell and his newly formed glbl wrmng collective, whose eponymous compilation album is out today, February 19. It’s the first step toward a broader vision, fostering a community centered around a pool of sustainable resources in an effort to make information more accessible, transparent, and impactful.

glbl wrmng vol.1’s keystone quality is its collaborations between emergent talent and more established acts, including members of the GRAMMY-nominated Tank and the Bangas, the buzzing Stone Cold Jzzle, and Pell. The album has presented some of the included artists their first appearance on a release bigger than a random playlist.

glbl wrmng’s name was Pell’s idea. “Global warming disproportionately affects New Orleans compared to a lot of the US, especially in terms of receding shoreline,” he says. “I thought it could be a metaphor for how hot the music scene is here, but also how infrastructure in the New Orleans music scene is not accessible or proportionate to the amount of musicians we have in the city.” 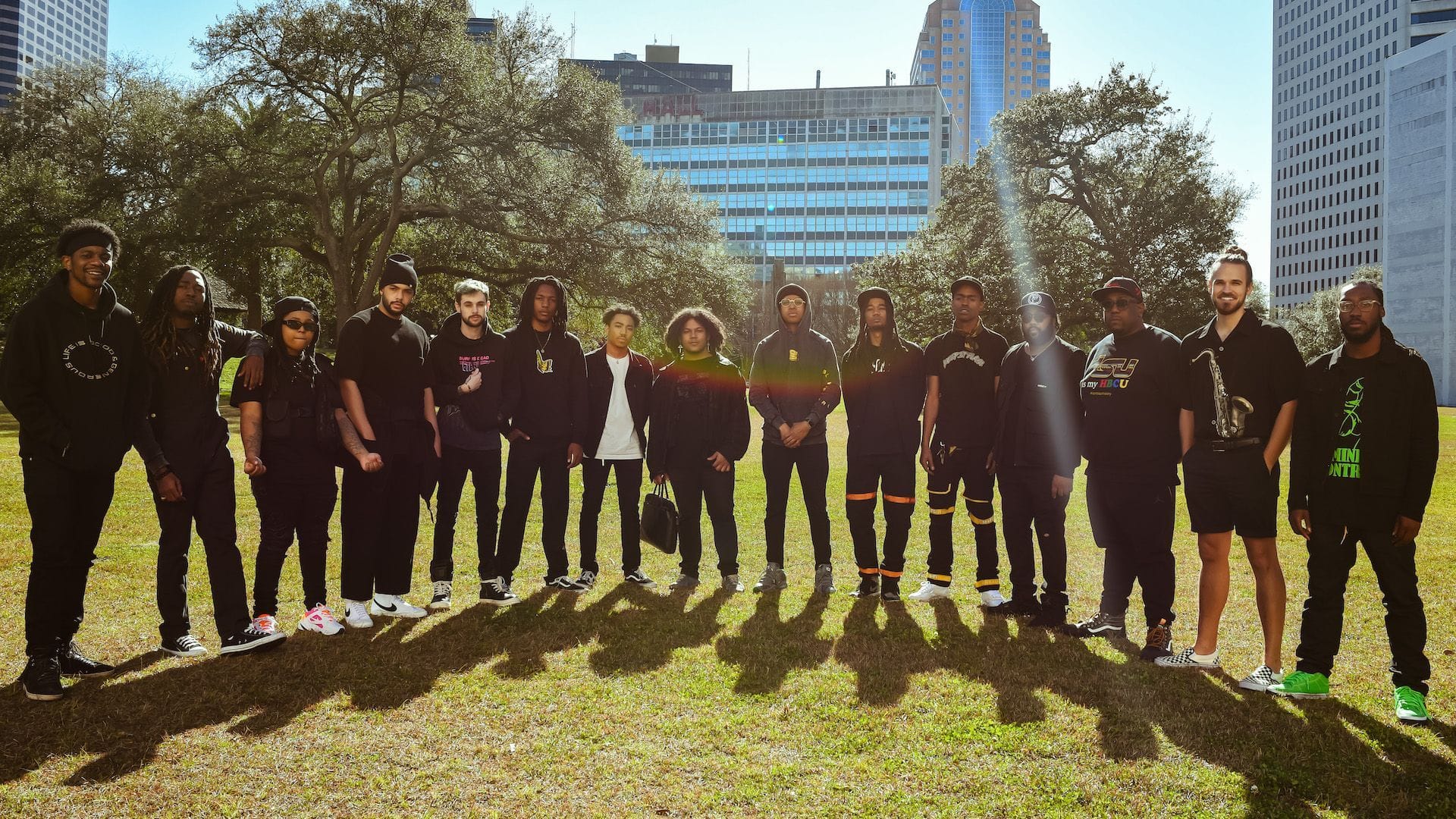 In 2019, Pell met Cameron—whom he calls “a genius”—while touring with Tank and the Bangas and presented him with his idea. The two established a business partnership anchored by glbl wrmng vol. 1 and fueled by something greater. In addition to the musicians featured on the album, the collective is also made up of producers, graphic artists, photographers, and videographers.

Cameron, who frequently is featured as a panelist organized by the New Orleans Music Economy initiative, says glbl wrmng’s end goal is to normalize the idea that access to resources shouldn’t be limited to certain artists. “Some of our folks [like] PJ Morton, Jon Batiste, Pell, Tank and the Bangas—the list goes on and on—have done all the things to get themselves to a certain level and they want to open up the lane for New Orleans,” he explains. “That is not necessarily how we were raised. In the culture of New Orleans, especially native, we weren’t raised to open up the community when you get the chance. Like, get you straight. Get your people straight. We come from this culture of [thinking] there is a finite amount of resources. Social media’s opening this up. The community is really forming. So glbl wrmng is this idea of using that momentum to bring people together.

“It’s not just about making music. There has to be something going on, like a give-and-take in the network and the community. The artists are giving us their time, their energy, their music—what do we give back to them? A really big thing about what we’re doing is teaching artists about the business, teaching them what a songwriter is, and about BMI and ASCAP. We just want to grow and then empower the artists.”

Pell mentions Cash Money, No Limit, and Jet Life, the triumvirate of New Orleans hip-hop labels which each presented the city with some infrastructure capacity. glbl wrmng is built on their foundations and evolving towards something more expansive.

“What this project is doing is creating access and that transparency of business that oftentimes you won’t get from just seeing somebody doing it,” Pell tells me. “Seeing somebody at phase five of their career, when they’re getting their GRAMMY, or they're on TV or have their big house and whatnot... I think there are a lot of steps that are always hidden from up-and-coming artists and people in the city, and just creatives in general, that may deter them from understanding what success could and should look like for them. You always have that parallel of trying to look at what somebody else is doing to define your own success.”

glbl wrmng’s goals for the future include teaching kids how to be artist managers, music marketers, entertainment lawyers, or tour directors. “A lot of these jobs are things you don’t necessarily have to go to college for, and is stuff most POC kids aren’t really exposed to,” Cameron says. As of today, there aren’t any specific plans to turn glbl wrmng into a brick-and-mortar business, although that’s certainly something that would be cool, someday. Instead, Pell says the focus should be on giving artists exposure to the inner workings of the music industry, through organic interactions.

“I think the younger, DIY generation, because it is so easy to make content, maybe doesn’t have the same wherewithal as to the value of what they are doing,” Pell says. “It’s dope to be a manager, a photographer, to be anything else behind the scenes. It’s identifying people’s talents and letting people know these things actually can result in a good community and something we can all fall back on.”

Pell continues: “It’s about building a community where we share what we learn. I don’t think my career’s perfect. I think there’s a lot of things I’ve learned on the way. Certain stories I have are valuable to talk about with artists. It’s about providing that access because, at the end of the day, you don’t want to look at someone else’s plate and yours goes cold.”