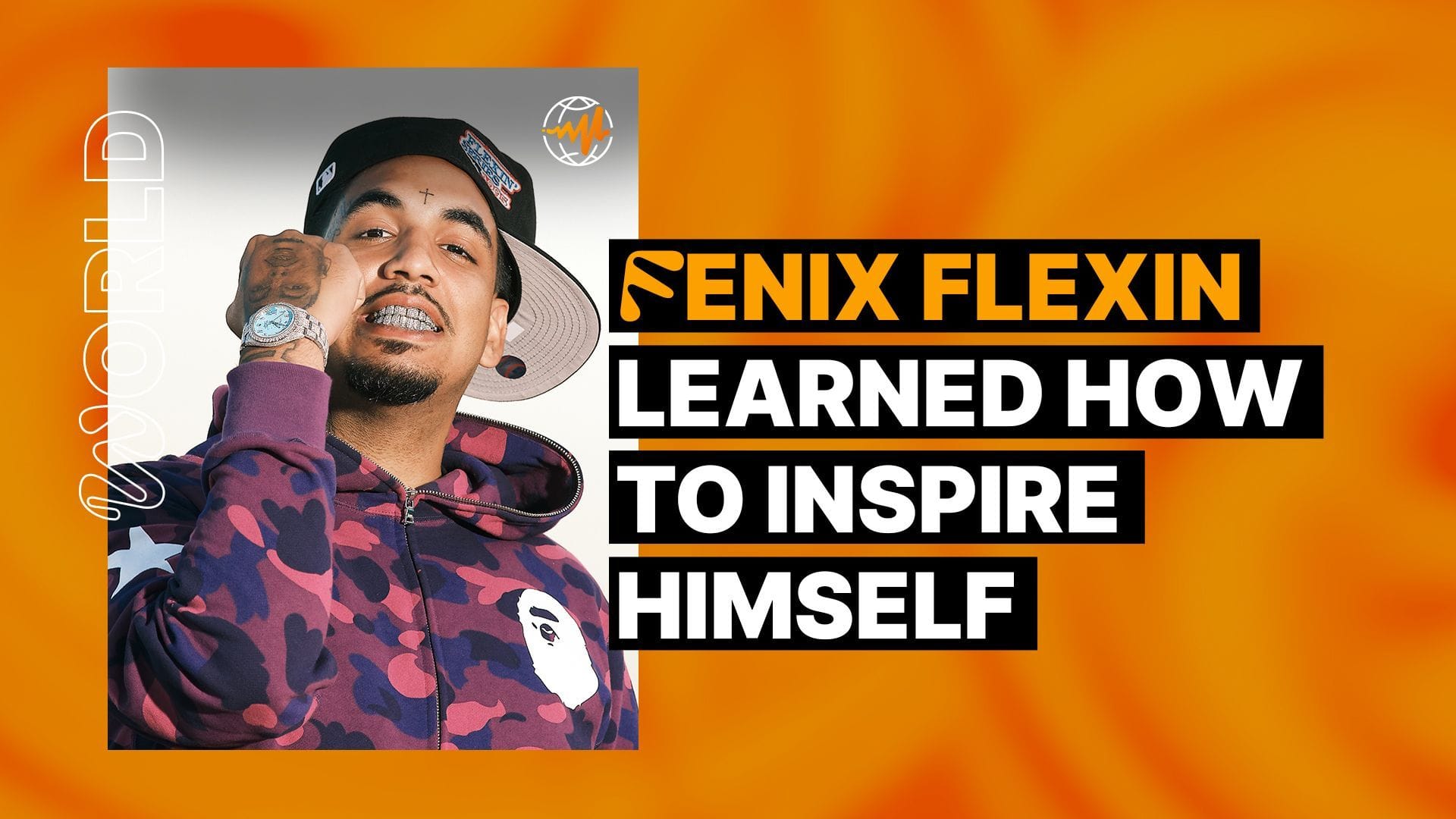 By the beginning of 2020, Shoreline Mafia had reached critical mass as a homegrown regional act. After their 2017 breakout tape ShorelineDoThatShit, collaborating with popping LA producers, signing with Atlantic Records in 2018, and touring for the next two years, the four-man group of Fenix Flexin, OhGeesy, Rob Vicious, and Master Kato seemed to be on the standard trajectory of a successful rap group.

However, paths diverged in April 2020 when Fenix Flexin announced he was amicably splitting with the group. He said in a tweet from April 6 that his exit from Shoreline Mafia was to pursue his individual creative interests and vision for himself and that the move doesn’t reflect any malice towards the group. Since that time, other Shoreline members followed suit, announcing their own solo careers and releasing singles and projects.

Over a year removed from the official dissolution of Shoreline Mafia, Fenix Flexin is in a small studio in an alley behind a yogurt shop in the San Fernando Valley. He’s recording some music a few days before the July 1 release of his first solo album, Fenix Flexin Vol. 1. He walks in slowly wearing a red FTP hoodie, a black beanie, and khaki pants. Since he’s just left the gym, there are slides on his feet, but he’s still swinging a pair of Jordans back and forth in the left hand in case they’re needed. When Fenix puts them down, you can fully see the Glock symbol tattooed on his hand. Today was a shoulders-and-chest routine. “I actually couldn’t work out when I wanted to start,” he says, “I had to hike for a few weeks to get my cardio up so that I could start to seriously lift weights.”

It’s one part of the holistic change Fenix says he’s been striving for in the lead up to his debut solo album, Fenix Flexin, Vol. 1. It’s trivially correct that the life circumstances of an artist will affect their music, but it’s hard not to reflect on his project without considering the almost metaphysical dimension of his sobriety. Past indulgence is still source material for his current music, but the way he approaches song-making feels more methodical and purposeful. 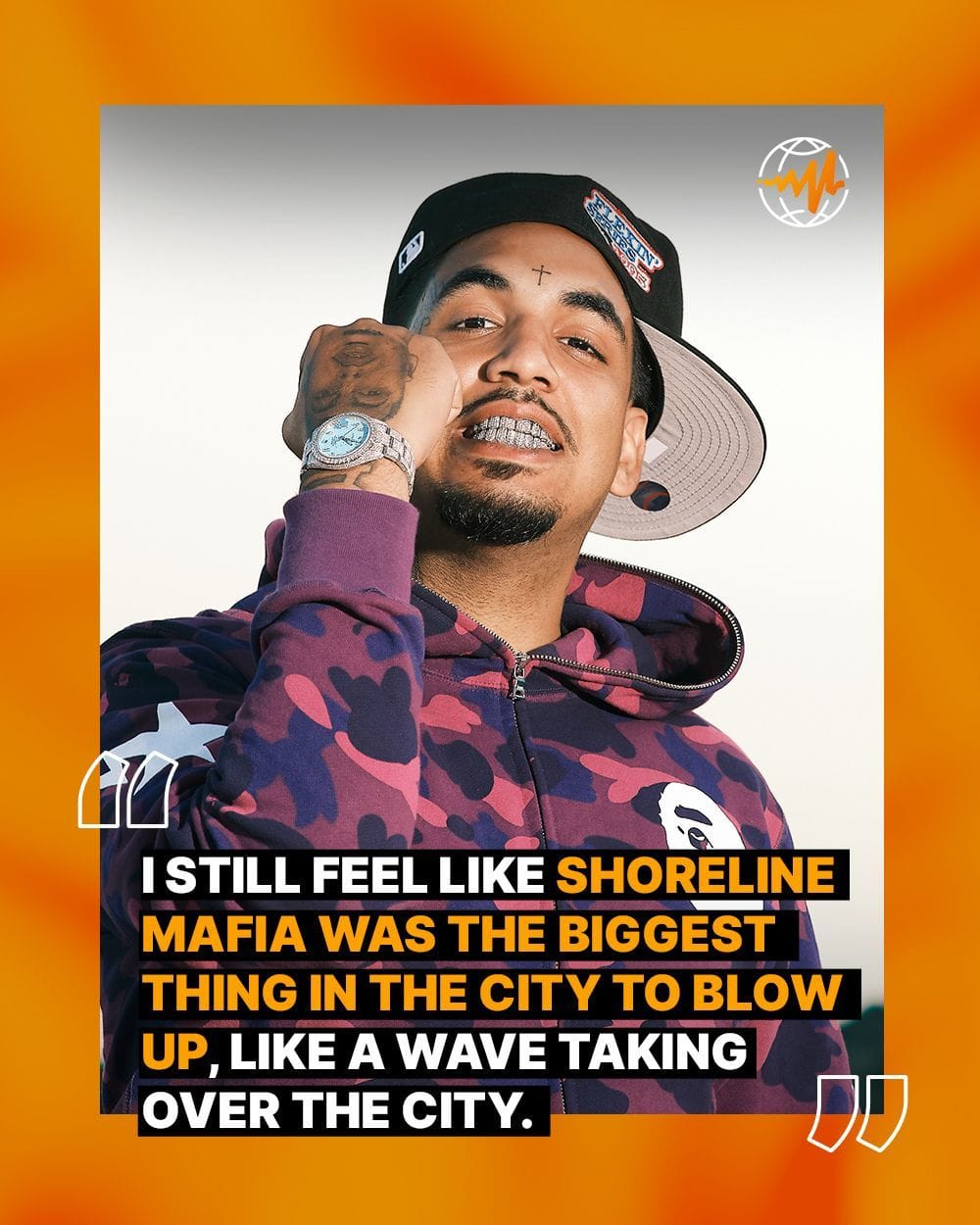 Fenix is explicit about the connection between his addiction, the trauma of losing friends, and just how fickle relationships can be in the context of 21st century label monopoly. Tracks like “Pain” and the more direct “RIP Mac P Dawg”—referring to his friend Joshua Galvez, an emerging rapper himself who was killed in April 2020—show Fenix exercising a kind of reflection only possible when the nonstop 18-month touring comes to a halt.

Though he retains his Southland insouciance, Fenix is noticeably more direct in his songwriting and fluid in the way in which he mines a pocket through the subtly innovative production of ascendant beatmakers Ron-Ron, Cypress Moreno, and Bruce24k. For the next hour we discussed his early life in California, the differences between his work with Shoreline Mafia and his solo music, and the making of Fenix Flexin Vol. 1.

How was the gym today?

Today was good. It was a shoulders-and-chest day, but I’ve been in there every day for a few weeks now. Probably like a month ago I started doing five-to-eight-mile hikes and shit. I was so out of shape that I had to hike in order to get fit enough to start lifting seriously. Since I got sober it was a lot easier. I was hooked on OxyContin and shit like that. I’ve been sober for about three months now. It feels good to see that progress in myself, ya feel me?

What part of LA did you grow up in?

Shit, I grew up all over the place. I was born in Daygo (San Diego), then moved to Oceanside, spent a little time in Chula Vista, and moved out to LA proper in elementary school. Went to school in Huntington Park, then Downey for a couple of years until I ended up in East Hollywood. When I was a bit older, like 18, me and the homies lucked out and got a low-income spot on Hollywood Blvd. Then we blew up.

Did you have a big family?

I’m the 10th child, the youngest. I don’t know them all super well but the oldest is like 50 so double my age. I still feel old though.

Since I wasn’t necessarily close with all my siblings, friendships filled that role of family. My pops did his shit though, too. He turned his life around when I got older, like at the end of middle school, early high school. You can’t stop a kid from doing what he wants to do, especially city living. Whatever you’re around you’re gonna gravitate towards. I got kicked out of the house when I was like 17 and had my first kid. 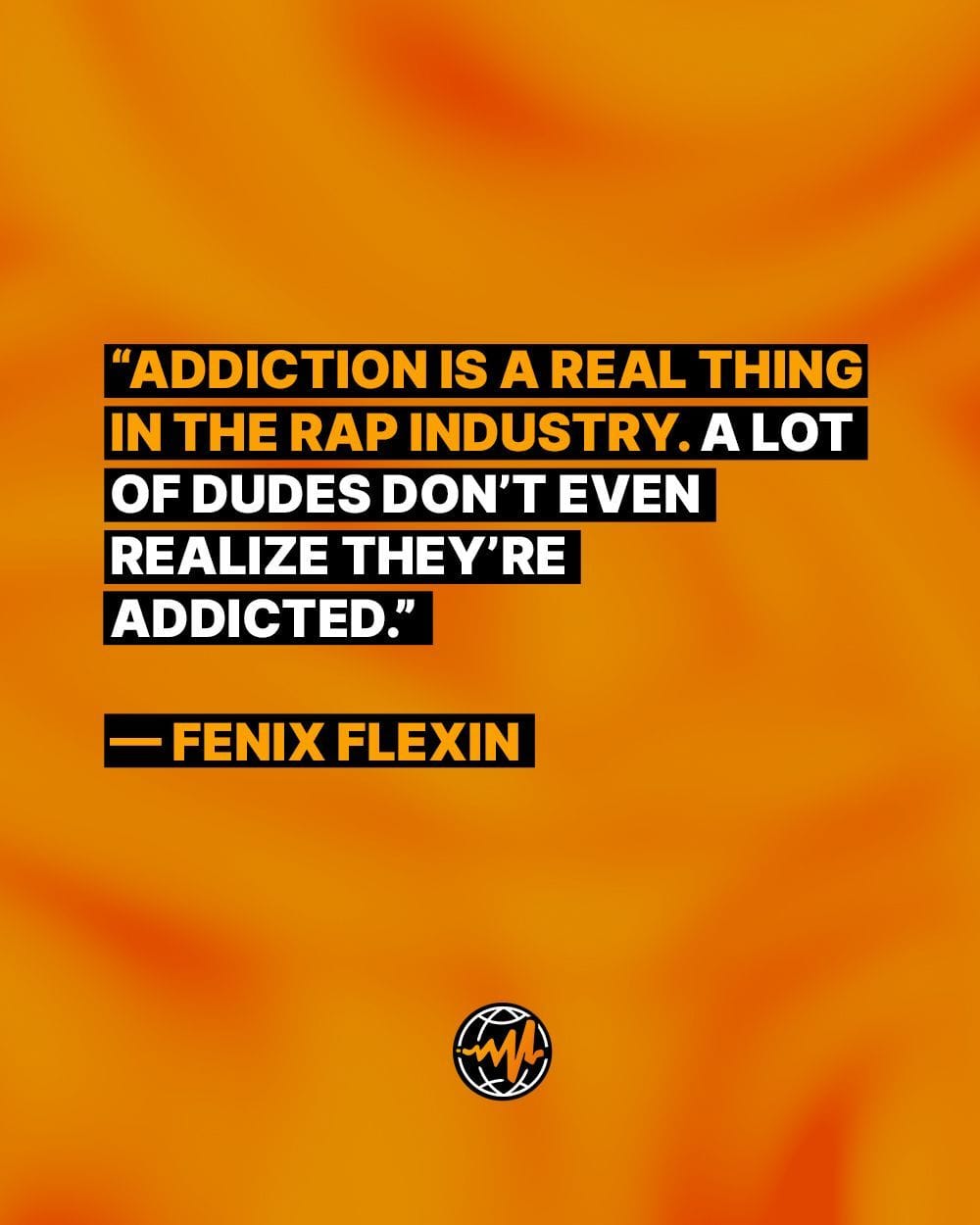 What is fatherhood like seven or eight years in?

It’s hella different now cause you know I was so young. I have two sons now, Amari and Orien. I was a kid; I didn’t know how to be a dad. I’m lucky I was blessed to be able to support anything they need. I’m still learning, becoming a better person and a better father every day. The older I get, the more important family becomes. We were also gone on the road for basically two years. Then quarantine let me spend hella time with them. They have their own personalities now and you can see how beautiful that is. All you can do is share the best knowledge you have. Being a parent teaches you patience, that’s just part of it.

When did rapping start to become a thing?

I used to smoke with homie Offo (R.I.P.) and get hella high after school and start bullshit rapping. People would say I should try to make music. I wrote lyrics for like a whole year in early high school and then started recording the following year. I was probably 14 or 15 then.

How have you seen LA music evolve?

In certain ways, I feel like it can be oversaturated. Mostly with upcoming artists recycling sounds, but even with newer artists, they realize they can’t do the same shit. So I feel like that makes the scene cool nowadays. A lotta guys like Detroit beats and collaborate with those artists now so you’ll hear more of that style out here. Bravo The Bagchaser has his Auto-Tune shit he’s on now.

I like hearing the homies progress in their music. It’s only gonna grow. Everyone says LA’s out the box but I still feel we’re boxed-in. I still feel like Shoreline Mafia was the biggest thing in the city to blow up, like a wave taking over the city.

That’s a tattoo of Mac P Dawg on your right hand, isn’t it?

Yeah, he was a real stand-up dude. He was the most honest person I ever met. It’s fucked up that he’s gone. Sometimes God calls the angels home too soon and you need to be in a dark place to understand the good times. Light doesn’t have meaning if you don’t understand the darkness. 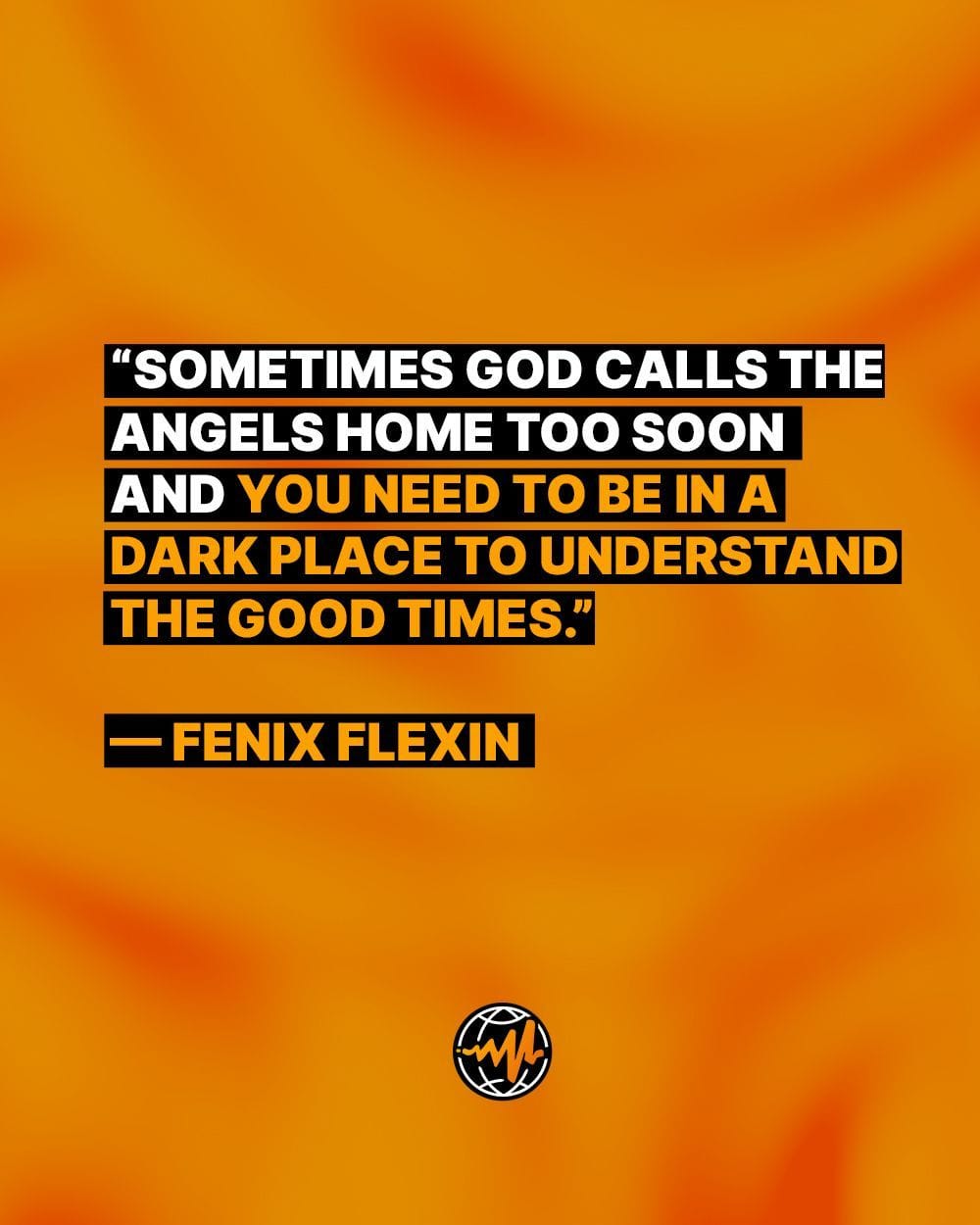 How do you feel like you’ve improved as a rapper since branching out on your own?

I learned how to inspire myself, you know? Early on, when I was recording I would feed off of other people’s energy. I wouldn’t rap unless I heard someone else rap on the beat first. Being low-key shy in the booth and all that. You’re your own biggest critic, you feel me? So I learned once you get to a certain level, you’re gonna sound good.

I’ve been learning how to record not being high, too. It sounds stupid but it’s a real thing. Addiction is a real thing in the rap industry. A lot of dudes don’t even realize they’re addicted, they just think they’re getting high. For me, it’s all been part of growing.

While the group isn’t officially making music, how would you describe the part of your career with Shoreline Mafia?

It was cool getting hella plaques and shit. I got two Gold records and a Platinum one now and I’m only 25. Most of the records that got a plaque were made at that crib in Hollywood too. It’s also surreal thinking about going on tour for the first time. I think my favorite show we ever did was San Bernardino at the first Rolling Loud out here in 2018. It feels like so long ago now. We were there with the whole Stinc Team before people got locked up and harassed. Those were good times.