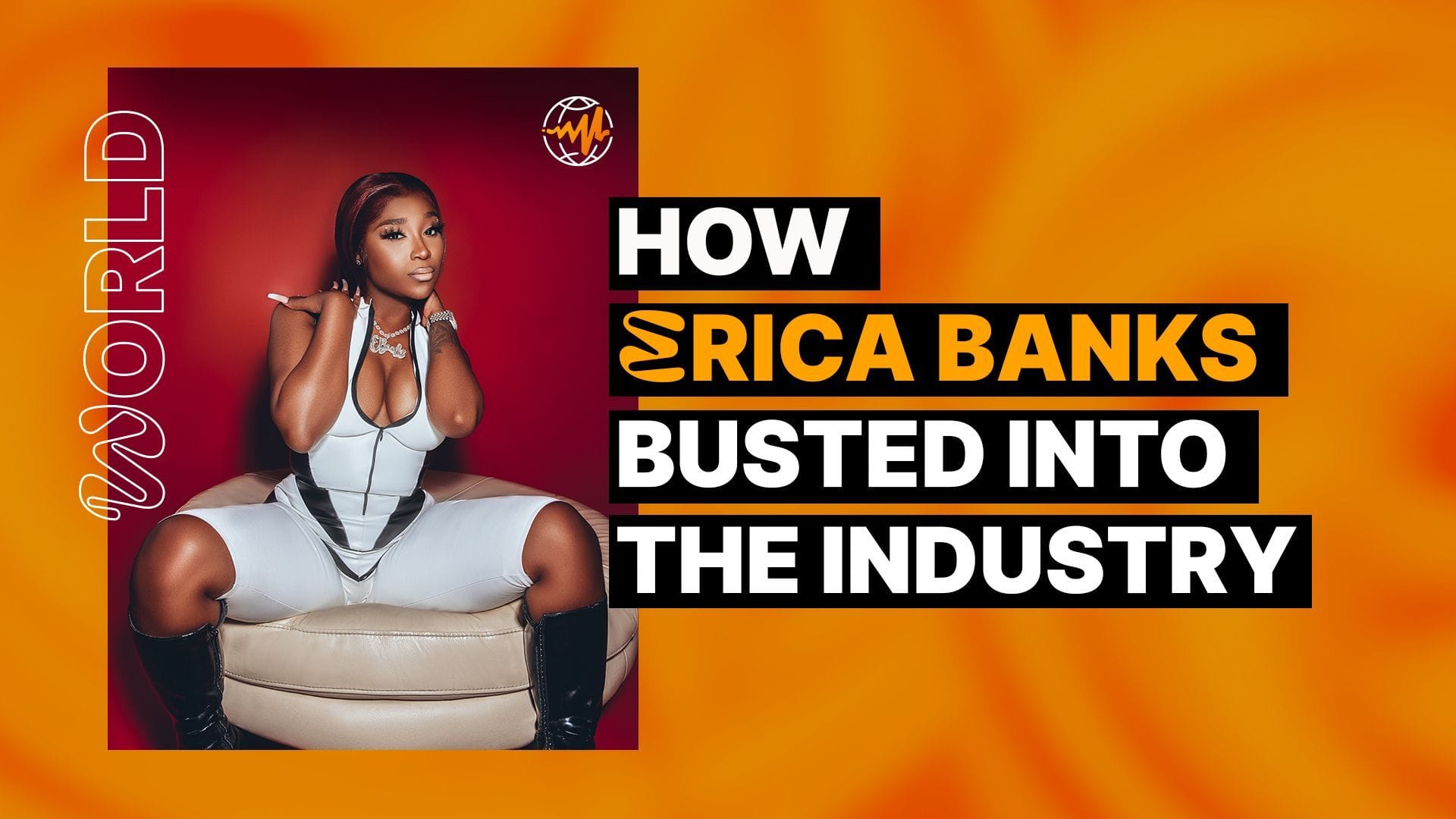 To the world, Erica Banks is the founder of our favorite social media challenge song of 2021, “Buss It.” The challenge plays the notorious “I think my butt gettin’ big” lyric from Nelly’s 2002 smash hit “Hot In Herre” and asks users to go from laid-back to bustin’ it in style. More than a social media challenge, the rapper is focused on leaving her mark. She describes herself more broadly, with a laugh, as an “edgy girl with a big sound who will slap anybody.”

The DeSoto, Texas native’s music blends Southern swag with a Dallas-fused flow atop trap-inspired beats. “I was always surrounded by music, especially being in Dallas,” she tells me. “I feel like being surrounded by the artists and the type of music I was, had a big influence on me wanting to do music. Seeing people in your city make it and go big is inspiring.” Prior to her 2021 hit from her self-titled 2020 mixtape, Banks signed to 1501 Certified Entertainment after putting out three independent projects in 2019, including Art of the Hustle, Pressure, and Cocky on Purpose.

Banks is playful outside of her music, recounting her favorite submissions to her world-renowned #BussItChallenge: Rubi Rose and comedian, actress, and industry vet Mo’Nique. Yet, there’s one artist in particular that she’s waiting on. “I would love to see Nicki Minaj,” Banks says with hope in her voice.

“People tell me all the time my music makes them feel confident,” Erica Banks concludes, “and I want to keep that going.” 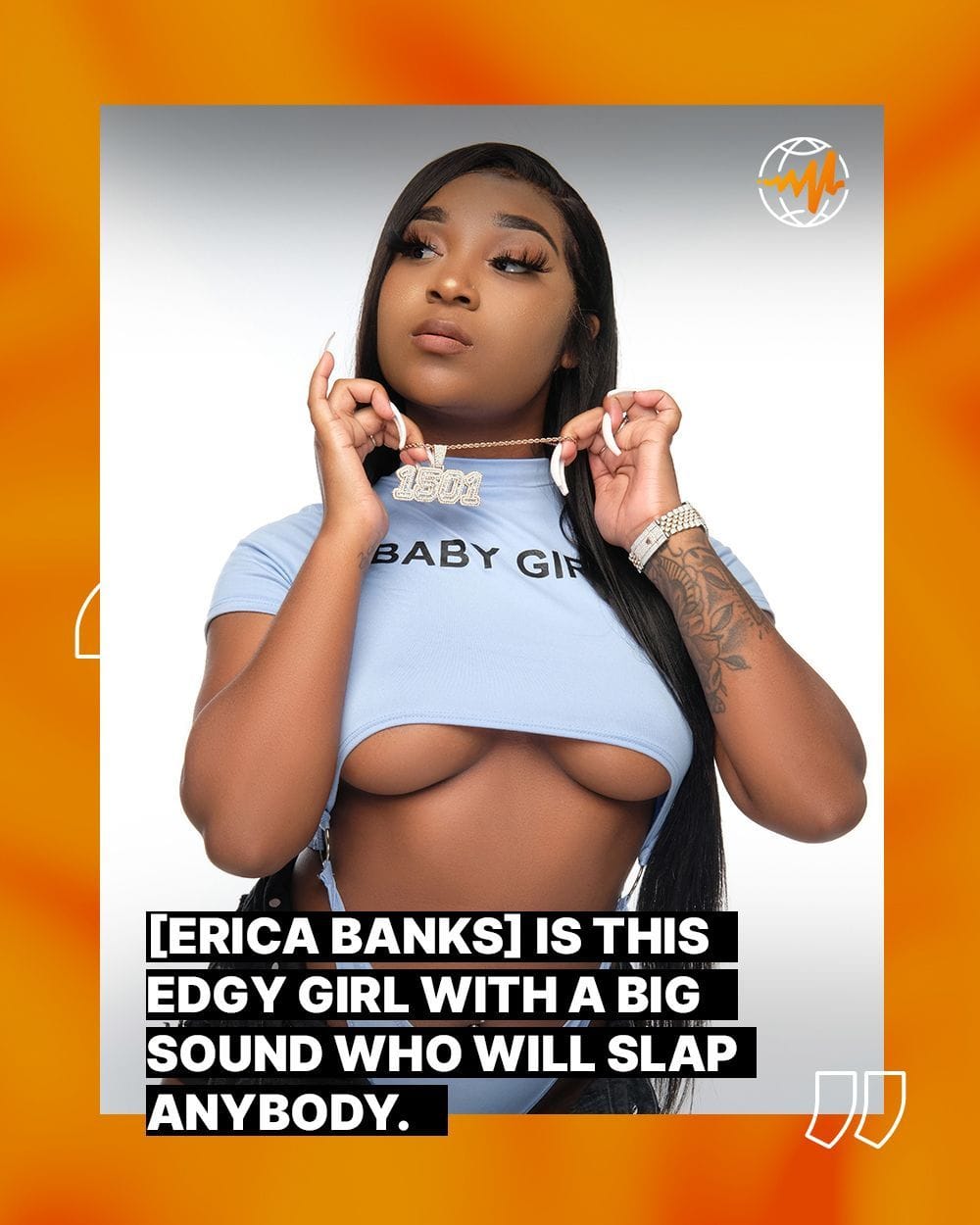 How would you compare Dallas rap to the rest of the music industry, and what does Texas bring?

I feel like we bring a more Southern feel. Even the production is a lot different than any other area, obviously because it’s Texas, and just how we flow. A lot of people can tell I’m from Dallas, or Texas period, just from listening to how I flow or how I recite my raps. We have a very distinguished sound.

How did “Buss It” come together?

As far as creating it, it was just another day in the studio. Sgt. J, who produced it, was just going through beats like any other day. Whenever I liked the beat, I would just stop him, and I stopped him on that one because the sample is what caught me. I decided to go in and try to make it a club track. I actually didn’t care for the song at first, but he did, and my friends all did as well, so I decided to just go ahead, finish it, and put it out.

Did you ever imagine it would garner the traction that it did when it dropped?

What was your reaction when you saw the #BussItChallenge pop off, and how did you feel when you saw celebrities like Monica, Tracee Ellis Ross, and Gabrielle Union participate?

It was a shocker, but it was also exciting. At first, I didn’t know how to accept it because it was something new for me, but once I kept seeing celebrities do it, it kept becoming more and more real. It was exciting yet still unbelievable.

How have you seen the challenge allow women to embrace themselves?

I’ve seen more and more women getting comfortable with being on social media and showing their natural faces and natural bodies. The challenge is basically you showing yourself before being all jazzed up, so I feel like I’ve encouraged a lot of women to be confident in that with showing the world who they are behind the glitz and glamour. I’m glad I was able to do that.

What made you decide to sign to Warner Records, and what attracted you to this specific label family?

I just go off of my intuition. I had a couple of deals I passed up because I didn’t think they were for me, but I felt like this particular situation was for me. I went to sit down and meet the team as well just to get a feel for everybody. I felt like this was something that was meant [to be] just from the energy and the vibe. It was just right on time.

How did the “Buss It” remix with Travis Scott happen, and what was it like collaborating with him?

That was crazy. I had gotten a phone call, and the record was played for me. It was actually a surprise. I heard Travis Scott on it, and I could not believe it. I didn’t reach out to him—he decided to do that on his own, which I’m so grateful for. He said he decided to do that because he’s just been seeing me do my thing, and he thinks it’s very hard so, he wanted to get a record in with me.

How have you seen the culture of Black female rappers come in and shake the table in the industry?

Female rappers are getting bigger and bigger, and it’s becoming the new norm for the music industry. For me to see it growing like it is, it’s exciting and encouraging. At one point, it was male-dominant, but more and more women have been bringing talent and coming to the table.

Even though you garnered traction as the creator of “Buss It,” what else do you want to be known as, and how do you plan to leave your stamp on the industry?

I want to be known as one of the biggest female artists yet to come, and I want to be able to leave my mark on the world. I want people to know that Erica Banks is this fun girl who can make me feel good when I turn the music on and makes me confident in myself. People tell me all the time my music makes them feel confident, and I want to keep that going.