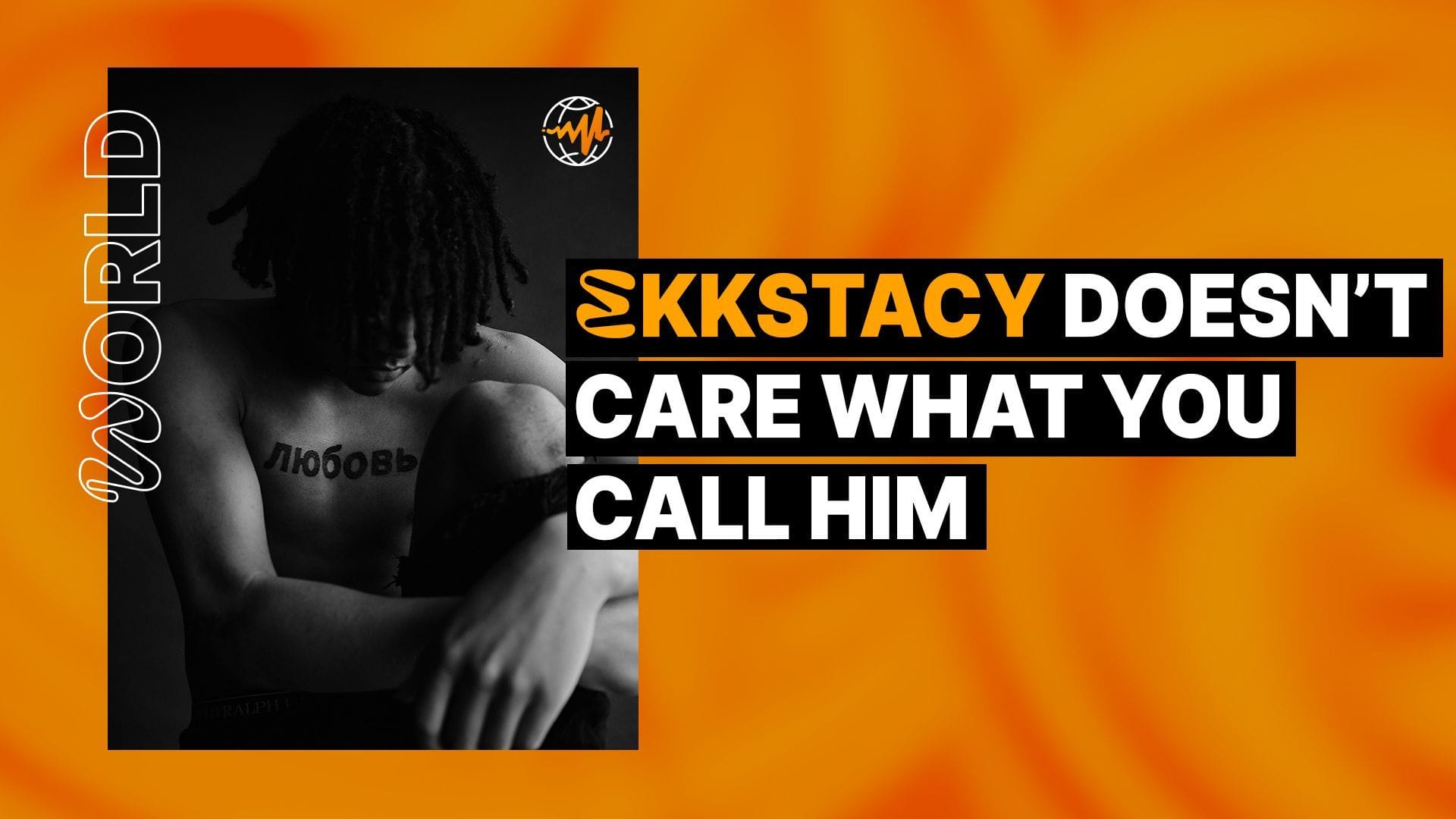 ekkstacy makes music you quietly cry to until you feel whole again. The 18-year-old Vancouver artist’s recent singles—“i walk this earth all by myself,” a song about being lonely, and “i want to be by your side”—position him as pop’s new antihero. Still, as he tells me over the phone from Los Angeles, he isn’t too concerned with how he’s being labeled.

Beginning writing as a form of therapy during one of the darkest periods of his life—dealing with his parents’ divorce, psychosis from drugs, and living with addiction—ekkstacy’s sound borrows from his past to look towards a brighter future. He started making music at 14 but quit shortly thereafter because he had nothing to say of substance. Though people around him were supportive, he couldn’t hear the quality. Stacy clearly remembers the first time he recorded a song that stood out to him. He dropped that song within an hour of cutting it, and life quickly changed.

Fusing new wave, indie, post-punk, and openly dismissing genre as inefficient for his generation of creatives, ekkstacy’s music is a guiding light for fans. He’s already had a sea of messages thanking him for his work. Sporting a “love” tattoo on his chest, written in Russian, ekkstacy’s soft-spoken music belies his rebellious tone. Over the course of our chat, he reminds me he doesn’t care what anyone calls him. He doesn’t internalize negativity but reveals himself to be sentimental beyond expectations. 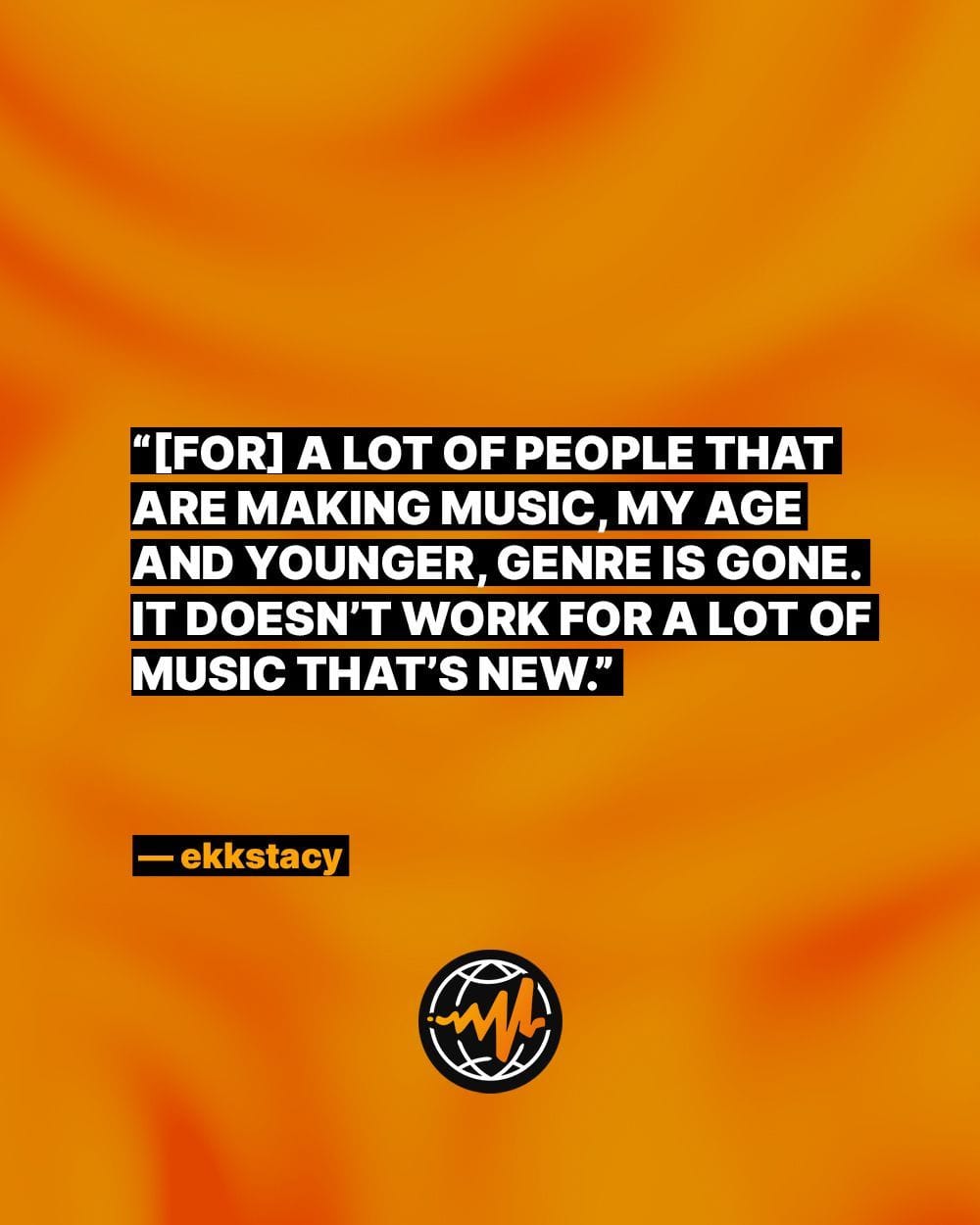 “I’m corny as fuck,” he jokes at the end of the conversation. It’s an unguarded moment for an artist who deals in vulnerability.

Could you pinpoint the moment you felt secure enough in yourself to start writing?

I felt the worst when I started writing, and it helped me be better.

It was the worst time of my life—it’s better now.

How did writing help?

It was therapy. I didn’t have anyone to talk to. I didn’t really have friends in high school—I had a few—for the longest time, it was just me. Music was how I got it out.

When did you find the confidence to start releasing your music?

It took a while. I had the idea to start music when I was 14. I tried, and I was trash, so I just quit. When I was 14, I didn’t have anything to say. I wanted to make music, but I didn’t want to make bullshit that had no meaning.

When I finally made a song I thought was cool, I dropped it an hour after it was finished. People already fucked with me everywhere I went, but it was hard to overcome. As soon as I dropped, people liked it.

What did it feel like when you finally liked one of your songs?

The best feeling! Obviously, that also comes when you start something new. It takes a lot for me to get that excited now. When I first started, every single time I made a song, I freaked out. My music is probably better now, but it doesn’t get me as excited—unless it’s crazy.

Are you a perfectionist?

Yeah, for sure. Only with music, though. Everything else I fuck up.

Your influences are vast, and your sound reflects that. How do you balance indie tones with synthwave, for instance, without making a mess of a song?

I like hearing the instrumental before I write. Every day it’s something new—I don’t really think about my influences. I’ve had influences, but there’s no one I’m [actively] pulling from. I’m just me. Before, I had heavier influences. At this point, I’m going off the top of my head. People will tell me, “Yo! This sounds like [a song] from 1987,” and I’m like, “Bro, I don’t know what that is.”

I’d love to get your take on genre as a whole.

[For] a lot of people that are making music, my age and younger, genre is gone. It doesn’t work for a lot of music that’s new.

Have you been boxed into a certain genre yet, and how does that make you feel?

Sometimes… I don’t really care what anyone has to say unless it’s positive, and even then… People can say what they want.

With a song like “i walk this earth all by myself,” you’re making music to cry and brood to, which begs the question: Have you started getting messages from fans about what your songs mean to them?

Does that weigh on you? Just this idea that another person—a lot of people—are reacting to your work in such emotional ways.

No, because I know it’s helping them. For me, I don’t talk about drugs and killing myself that much anymore, so I know my music isn’t being negative. I’m just saying how I feel and not pushing anything onto anyone.

Do you see yourself as a guiding light for fans?

People can see me however they want, and I’ll be here for the people that support me.