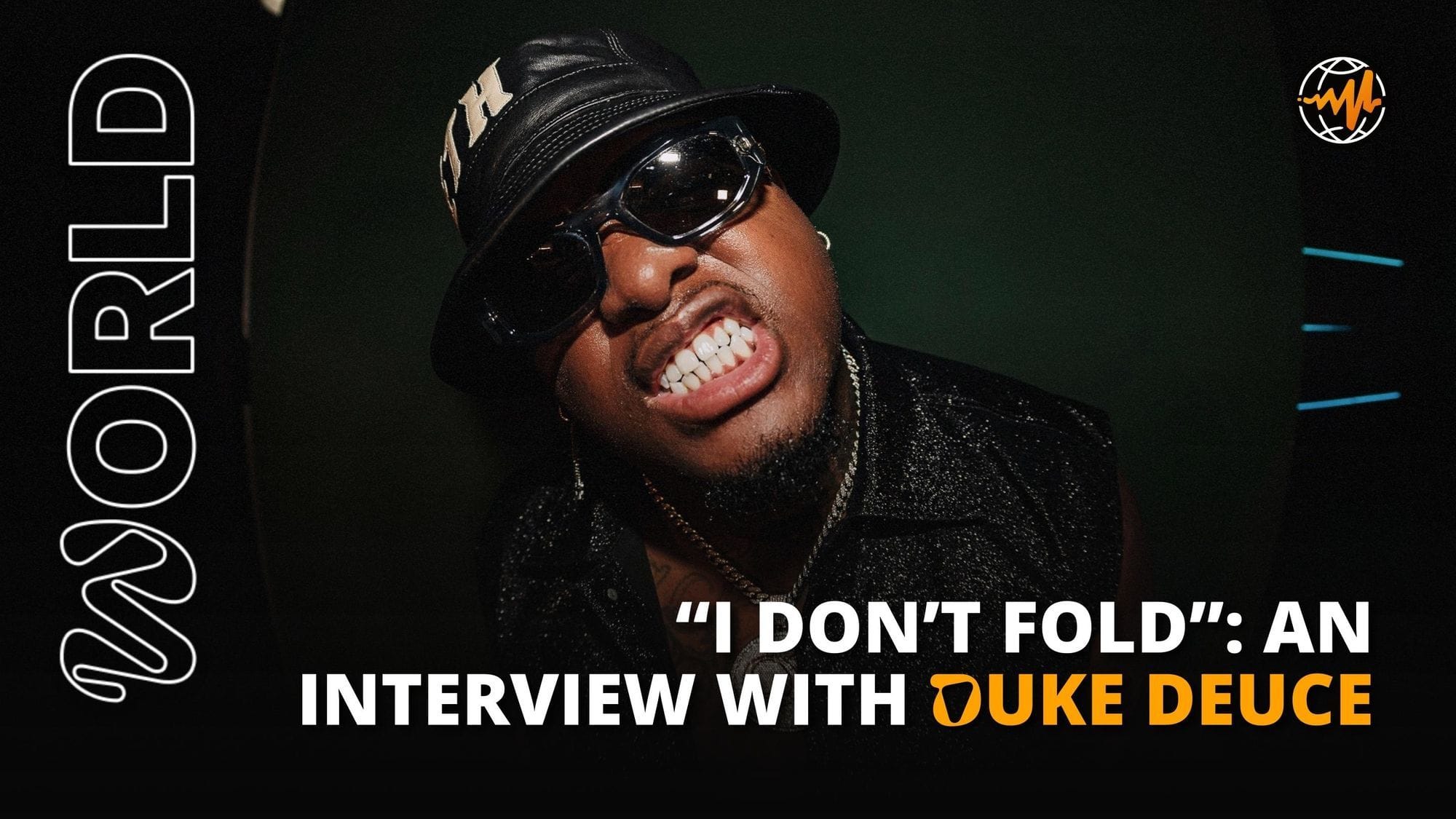 In his eyes, Duke Deuce has accomplished a lot and not nearly enough at the same time. The Memphis rapper’s 2019 hit “Crunk Ain’t Dead” was a breakout, catapulting him to a new level of stardom and opening the door for a bright future in music. And while his latest projects Memphis Massacre 2 and last year’s Duke Nukem have been successful, he feels like he’s playing to a lower ceiling than he should. “The pandemic kinda fucked up my whole little ride that I was on at the moment,” he tells Audiomack World. “I didn’t really get the chance to grow off of ‘Crunk Ain’t Dead’ like I could’ve. I kinda had to start over afterward.”

Breaking as a musician at any time is difficult, never mind during the unstable years of a global pandemic. Duke’s initial momentum was stunted by a lack of live performances and touring between 2020 and 2021, which he found distressing: “I’ma be 100—that shit fucked with my mental.” Still, Duke Deuce doesn’t fold, and his persistence is paying off. Since the release of “Crunk Ain’t Dead,” the crunk movement he played a key part in revitalizing is reaching new ears and even inspiring a new generation. “I be getting inspired by the ones coming up behind me,” he says. “It makes me feel good that they’re paying attention.” 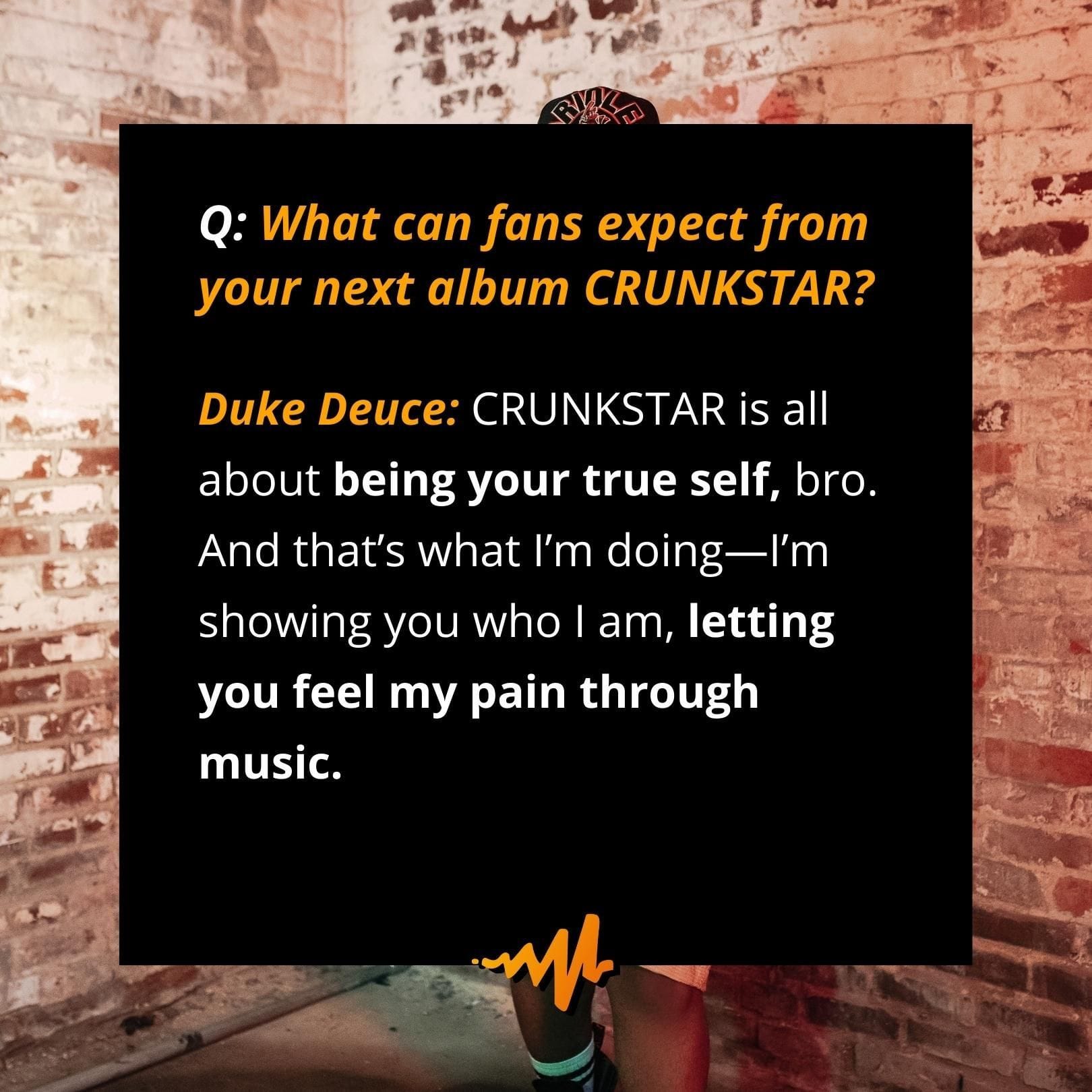 And while crunk will always remain a part of Duke Deuce’s canon, he’s just as excited to shake things up. His next project CRUNKSTAR, out tomorrow, will expand beyond his trademark sound. Take the self-titled lead single, which features much more singing than listeners have come to expect from Duke. He’s experimented with melody before, particularly on the closing track for the first Memphis Massacre tape, but his confidence in following his gut is growing. With this new album, he’s priding himself on being genuine about his feelings—and his craft.

Growing up, who were some of your favorite artists?

A little bit after high school, I fucked with Bankroll Fresh tough. Bro was a big inspiration for a lot of my shit as well that I don’t really get to talk about. We was on 2 Chainz heavy around that time, too.

He was creative as fuck, bro. Dude could rap… his flow. I’ma be honest—the thing I love most about myself and rapping is flows. Who can be super creative with this shit? I try to switch it up every few bars type shit, and I loved the way bruh used to switch it up.

Your father was a crunk artist. What was it like seeing the world of rap through his work at a young age? Did it alter your perspective on the music at all?

Definitely. I feel like my pops and them was big on quality in their production. Their shit was so clean and unique. Pops always been different. His shit was dark and I just picked up on that shit. I got a different type of ear for music. Rock-n-roll, country, I don’t give a fuck what it is. If I like it, I’m bumping that shit. I feel like fucking with pops gave me a lot of range. We were just music babies.

Felt. My father made music for years as a part of a group. Having a parent who is/was involved in music really changes how you see all of this.

Even my granddaddy was a singer. My grandmother was in the choir, but my grandaddy was in a group called The Southern Heirs. They used to travel and perform and shit. Even my mother was crazy with the singing. My youngest uncle used to rap and he was hard as a motherfucker. And his oldest brother played the bass guitar. This shit everywhere [in my family]. I couldn’t knock this shit if I tried.

When you first started recording, do you remember the first moment when you realized you’d landed on your sound?

That had to have been around 2017. That’s when I started to take shit serious and knew where I wanted to go with it. The first video I put out was for a song called “Stand By,” a pretty high-energy song. I was already on some crunk shit while everyone else was strictly going trap. I came in the game with that shit, ya feel me? As I started to advance and get a little more creative with my shit, it was more of “I’ma purposefully bring this back.” I be noticing other artists who aren’t as big as me be on the wave now, too. I be getting inspired by the ones coming up behind me. It makes me feel good that they’re paying attention. 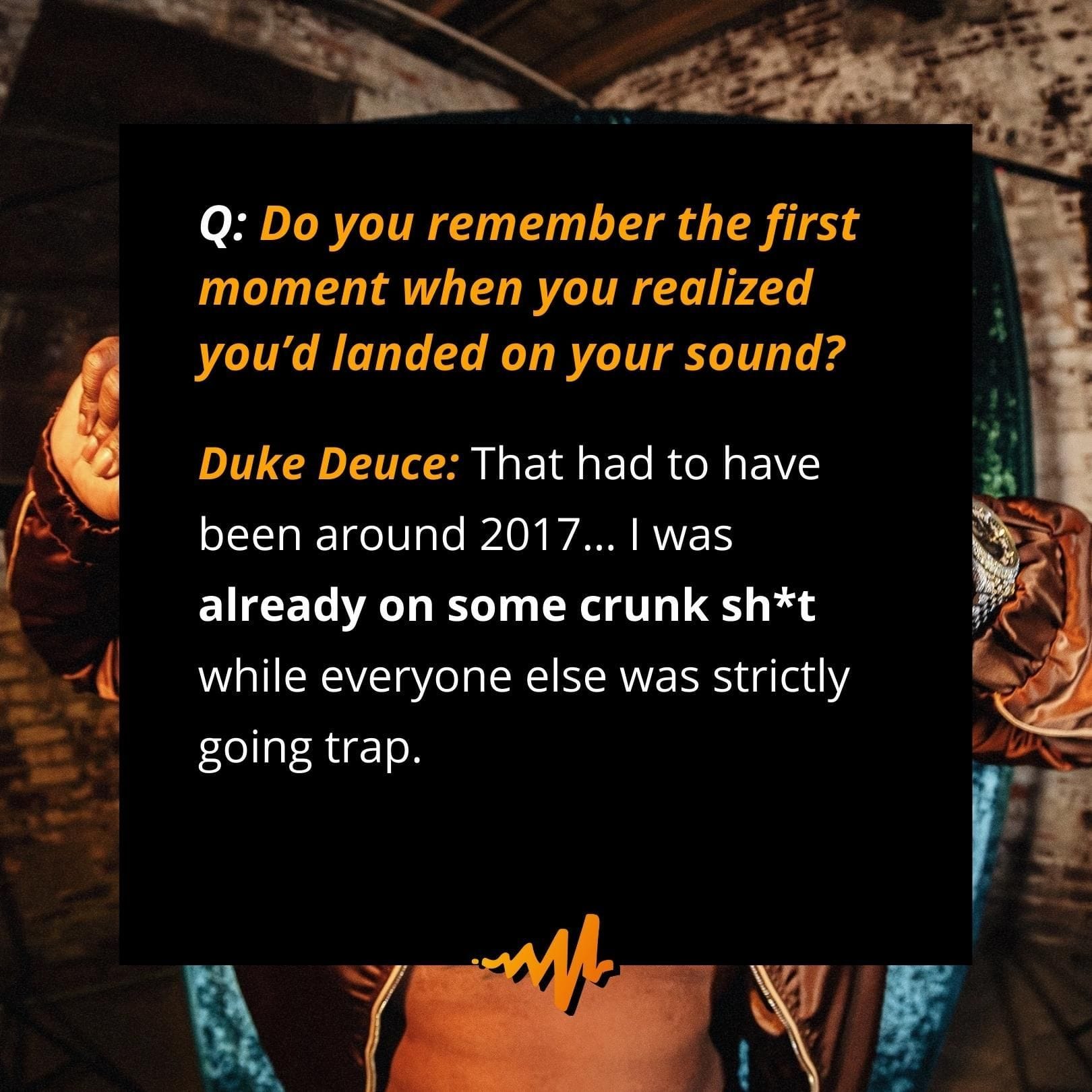 That means you’re doing something right.

That means I’m the future, bruh. I’ma take this whole shit over eventually.

And you haven’t stopped trying. Since you dropped Duke Nukem last year, you’ve bided your time on the musical front. Sitting with the reactions to the album, how do you feel about how it was received?

I feel like the reactions were positive but the situation around that time was negative. I’m putting out all this heat during the pandemic and it was kinda hard to keep people's attention around then. The pandemic kinda fucked up my whole little ride that I was on. I didn’t really get the chance to grow off of “Crunk Ain’t Dead” like I could’ve. I kinda had to start over afterward. It’s tough, bruh. I’ma be 100—that shit fucked with my mental. This my dream, dig? That shit hit hard when it’s something you love. It’s like “Shit, I guess I gotta keep working harder.” I started going to therapy and shit.

We had a similar conversation the last time you and I talked. It’s disheartening to hear that the pandemic is still messing with your grind. You deserve a break, bro.

A good chunk of your latest single “Crunk Starz” has you singing. When did you decide that was a thing you wanted to explore more thoroughly?

Honestly, I’ve been doing this shit. Some of the first songs I ever recorded were melodic, which is crazy. Once I started doing the crunk shit and saw how people were receiving it, I had to keep pushing that. If you do go back to the first Memphis Massacre, the last song [“Outro / On Lock”] was melodic. I tried to slide it in on people and not give ‘em too much of it because they kinda trash talk you when you do some different shit even though I’ve been doing this. [With “Crunk Starz”], I was like “Fuck it, I’ma hit these people with everything I got.” I also see comments of people saying he only makes crunk music. Like damn, don’t box me in, bro. I’m an artist.

Considering all of that, what can fans expect from your next album CRUNKSTAR?

It’s pretty much everything. I feel like it’s a mental health month, so CRUNKSTAR is all about being your true self, bro. And that’s what I’m doing—I’m showing you who I am, letting you feel my pain through music. You’ll get the rock side, the crunk shit, that ratchet shit. It’s just a mixture of everything. 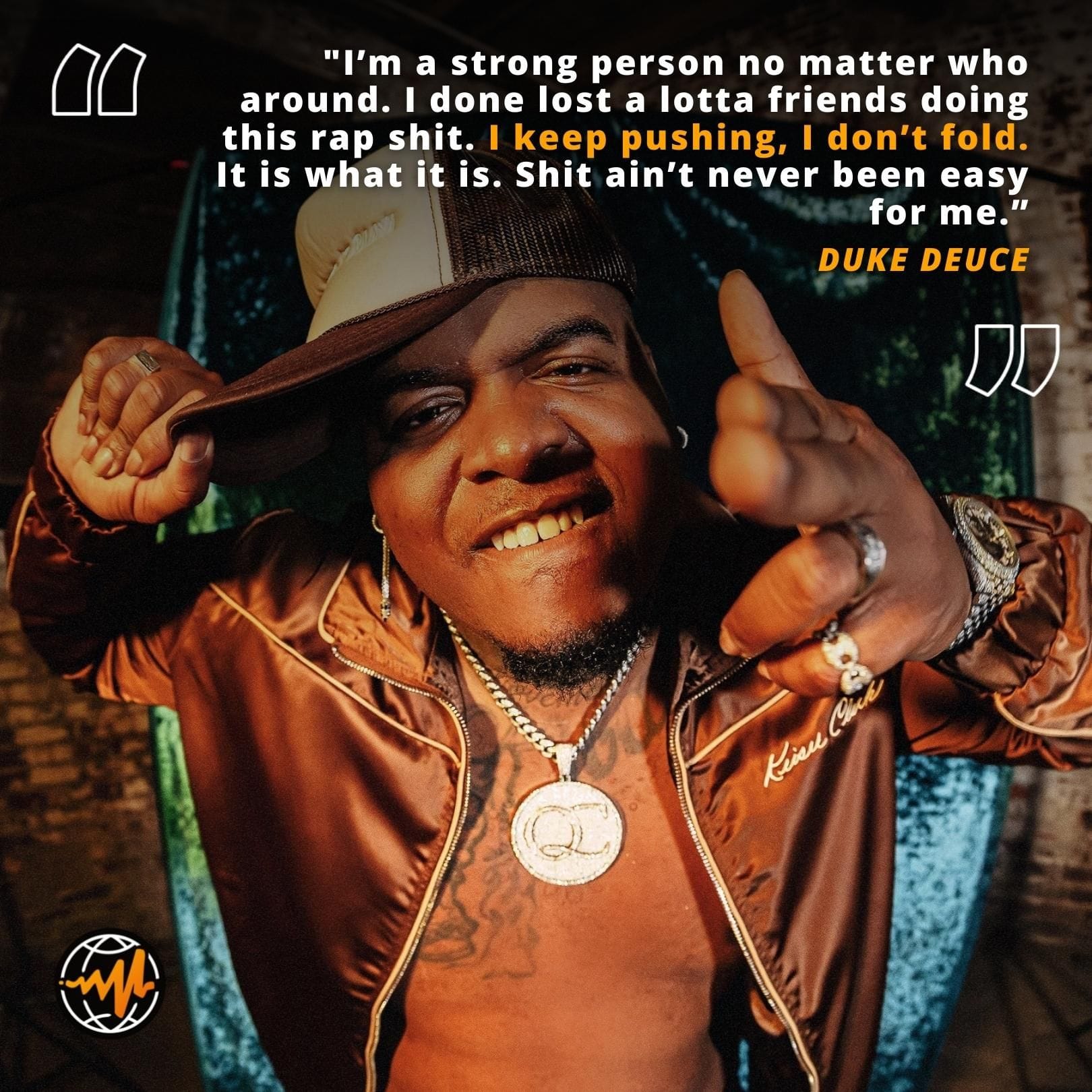 What’s one thing about Duke Deuce as an artist that the average person might not realize?

I’m a genuine person. I really like to goof around a lot. If you watch my Instagram, I’m gonna have niggas trippin’. I won’t lie, I’m really a homebody. I don’t even really like to fuck off like that, ya feel me? It just depends on what’s going on. I’m a full-time father and I’m doing this rap shit at the same time.

Do you have any advice for other Black artists who might feel like they’re being pigeonholed and the tension of navigating being a Black person in entertainment?

You just gotta find that niche. If you can find that, just keep pushing the gas. That’s my advice for everything—just keep going. Once you quit, you’ll never get the shit. And sometimes you gotta show people a different side of you, too. Real talk. I feel like a lot of people had a lot of sour shit to say about Kanye [West] until they saw his documentary [Jeen-Yuhs]. Sometimes, people just need to know your side of the story. Success brings a lot of stress.

Heavy Is the head that wears the crown type shit.

Facts, bro. That shit is too real.

So if Kanye is a hurt person, what kind of person is Duke Deuce?

I ain’t gon’ lie, Duke Deuce is a strong person. I’m a strong person no matter who’s around. I lost a lot of friends doing this rap shit. I keep pushing, I don’t fold. It is what it is. Shit ain’t never been easy for me.