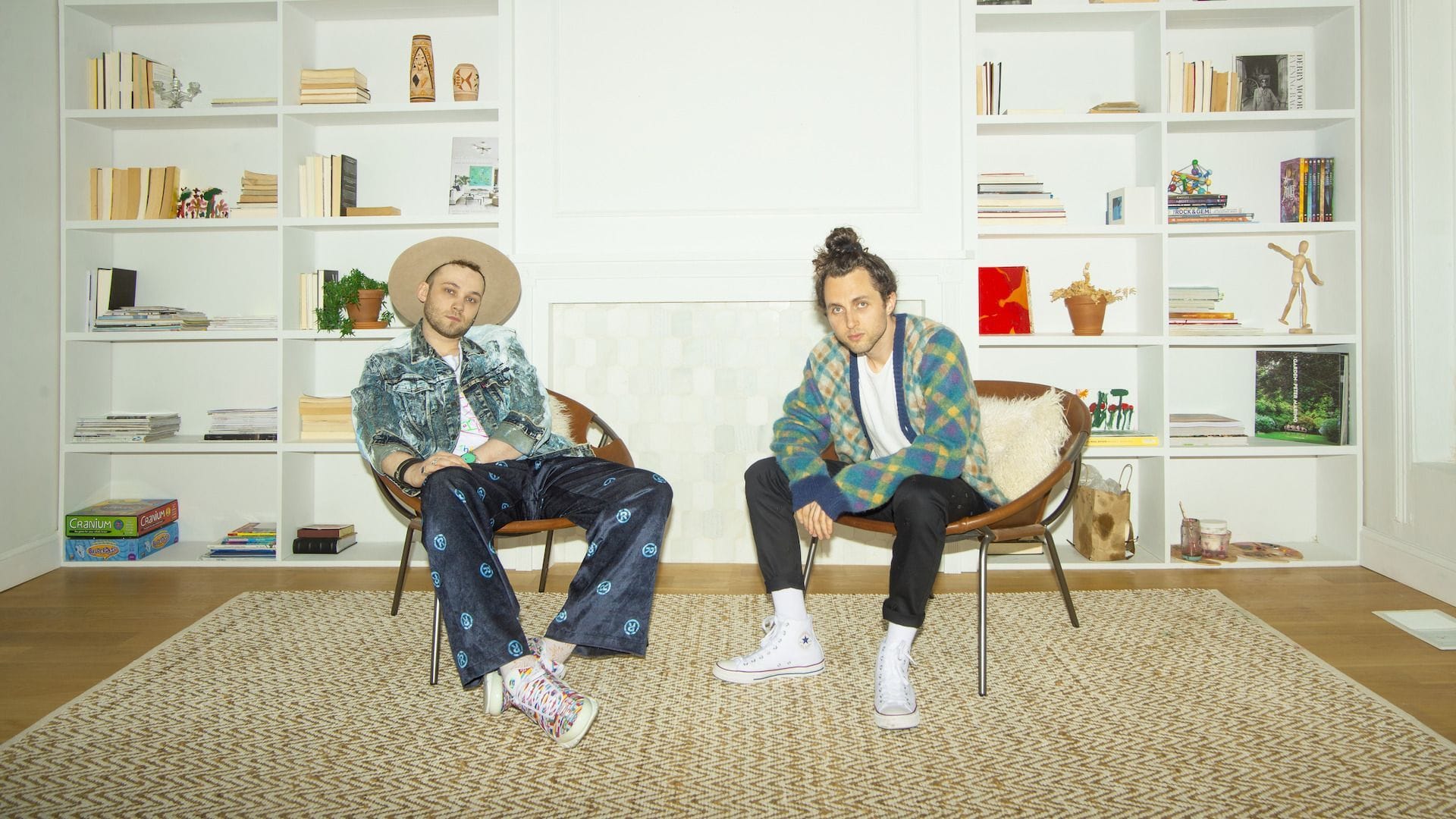 On August 21, 2020, in the midst of a pandemic, GRAMMY Award-winning duo Brasstracks released their long-awaited Capitol Records debut. Trumpeter Ivan Jackson and drummer Conor Rayne compiled all the fun they could to create Golden Ticket, a metaphor for success on the artists’ terms. It’s a lush and spirited adventure through a series of collaborations with trusted friends Lawrence, Masego, Robert Glasper, Col3trane, and more.

With an emphasis on keeping it light but not missing body in terms of the musicality, Golden Ticket is one of the great surprises of 2020—an ode to friendship and the ways in which music bonds us together. The duo released the deluxe edition of Golden Ticket on November 13, but the real treat arrived on December 11, with the release of the “My Boo” instrumental cover. “My Boo” is quintessential Brasstracks, reimagining classic moments with, well, brass. Let’s not forget these are the lads behind Good Kid, Brass City.

“My Boo” is the fun we all needed to close out 2020. As the year dies down and we optimistically look at 2021, there’s nothing quite like hearing “At night, I think of you…” rendered by an inspired horn section. So much more than the “No Problem” producers of old, Brasstracks exist in the unique space of contemporary jazz, R&B, and pure joy.

Before the year’s out, Ivan Jackson calls me up to reflect on 2020 and to set intentions for 2021.

Golden Ticket has been out for a few months now. How has the fan reaction impacted you?

Amazing, incredible, all the good and happy feelings. But it’s been a bit weird. Normally, after we release something, we are on the road. I have a tour. I can play the horn lines and watch people sing the horns back at me. That’s when you really know. This is the first time I haven’t gotten to experience that, which sucks.

People are on the internet more than ever now, and I’ve gotten to pay more close attention to what people are saying and how this is affecting them, and what our real cheerleader fans look like. We even made a Discord for fans to hang out and chat. So, I feel warm and fuzzy, but it’s been a little weird. A very new thing, for me, being in this internet space. I’m paying attention and enjoying as much as I can. It’s my debut album! I’m proud of it.

Biggest surprise that came with releasing the album?

“Basket Case” is the intro song, but there’s no real lyrics. Hearing people say that’s their favorite is entirely surprising to me. Overall, the favorite was “Golden Ticket,” but that also has to do with it being in the NBA Finals for every game. That was the craziest thing, in the moment. All my friends watch basketball—my family watches basketball. I get a text every night, “‘Golden Ticket’ at it again!’” The power of people sitting at home! Then, it’s trying to flip those people into new fans.

Then there’s the BTS record I produced (“Dis-ease”), and [Harry Styles’] “Watermelon Sugar” going No. 1. Those are fanbases that hang out on the internet, and it’s an opportunity for me to be like, “Hey! Thanks for inviting me into your world! My name’s Ivan. I’m in a band called Brasstracks. I make music, too.” They actually [listen]! As long as I’m nice and respective of these specific online communities, they’re so supportive. I got lucky that everything coincided at the same time.

Looking back at the making of Golden Ticket, how did COVID-19 impact your creative process with drummer Conor Rayne? Was it depressing, adapting?

I mean, yeah… Can’t make music with my friends… We were lucky because we finished the album before COVID hit. The whole process and mixing the album, we were in LA a month before. Everything was turned into the label in March. There were no depression feelings during the process of making it, except for… Anything I thought sucked back then pales in comparison to what happened afterward. No live shows, no three-continent tours. No chance for us to do what we do.

Thank fucking God I am a producer. I can stay at home and pitch things and keep myself busy. Oh, my God! If I wasn’t a producer…

I’m working on two different projects right now. The next Brasstracks stuff, again, got lucky because we got so much stuff recorded. I got a couple friends in town; we’re all getting tested regularly, but… This has been the most difficult time to try to piece together a project. Normally, it’s so easy for me to [say], “Cool, I have all the fabric, now to sew it all together!” The thread is not going through. I don’t know how to say it, but I can’t fucking do it. I can make all the songs but can’t put them together in a cohesive way. Doing it during a pandemic? It feels like I am banging my head against a wall, but I don’t wanna force it. But I hate taking time off music.

You two recently released the Golden Ticket deluxe. How does one go about selecting bonus tracks? Is there a desire to tack on as many cuts as possible, so you have to kill less darlings?

During the whiteboard phase, some songs beat other songs out. Then you think about that when doing the deluxe thing. “I love that song, but wait, it doesn’t stand up!” I hate the concept of the hard drive graveyard. Instead of trying to fit everything onto the deluxe, I try and just put the things that work on the deluxe. You save [what doesn’t fit] for other projects.

“My Boo” is out today, December 11, and it’s a wonderful cover of a classic. How did that one come together?

In 2016, “My Boo” had a resurgence—it was real big in 1996. We used to do a lot of covers when we were in between, trying to work on projects for ourselves. Now, we don’t have as much time to do it. So, we did that cover and capitalized on the fact the song was quite viral. At the time, I loved Jersey club music, and the original version we used to play was a lot more electronic.

Truthfully, I lost the project file in 2016. All I had was this one track to play along to at shows. I would just tell everybody, “Never gonna release that song, gotta come to a show,” as if I had this grand plan to get people to shows. It was a lie to cover up the fact I lost the project file. Fast forward to 2020; we can’t play any live shows. Now I have a pianist playing with Brasstracks all the time, Julius Rodriguez. He’s gonna be the next, fucking Quincy [Jones], or something. It’s hard for me to do records without him.

He was having to play over this bunk two-track I made in 2016. He was always like, “This sucks,” because it did suck. I [realized] I need to remake “My Boo!” I’m not gonna spend the money and the time and not put it out.

The new year is finally around the corner. What has Golden Ticket taught you, which you’re going to apply for success in 2021?

Put out more music, and not be so precious about it. Trust myself, and not care too much about things like features. Also, care a lot more about the people in my Discord than the random people who leave a comment on my YouTube page. [Fans] matter to me more. They’re the reason I’m here!

More importantly, do you even care about “success” in traditional terms? I’m talking about exuberant amounts of money and fame.

No. I have all the money I need right now. That’s not a lot! I’m not rich! But if my mom calls me tomorrow and says, “Ivan, we need some help,” I got her. I can do that. Again, not rich. But I make smart plays, and my rent’s too high, but I can still afford it. I have commercial success—I’m living in New York City, based off of music. Fuck, I don’t need anything else.