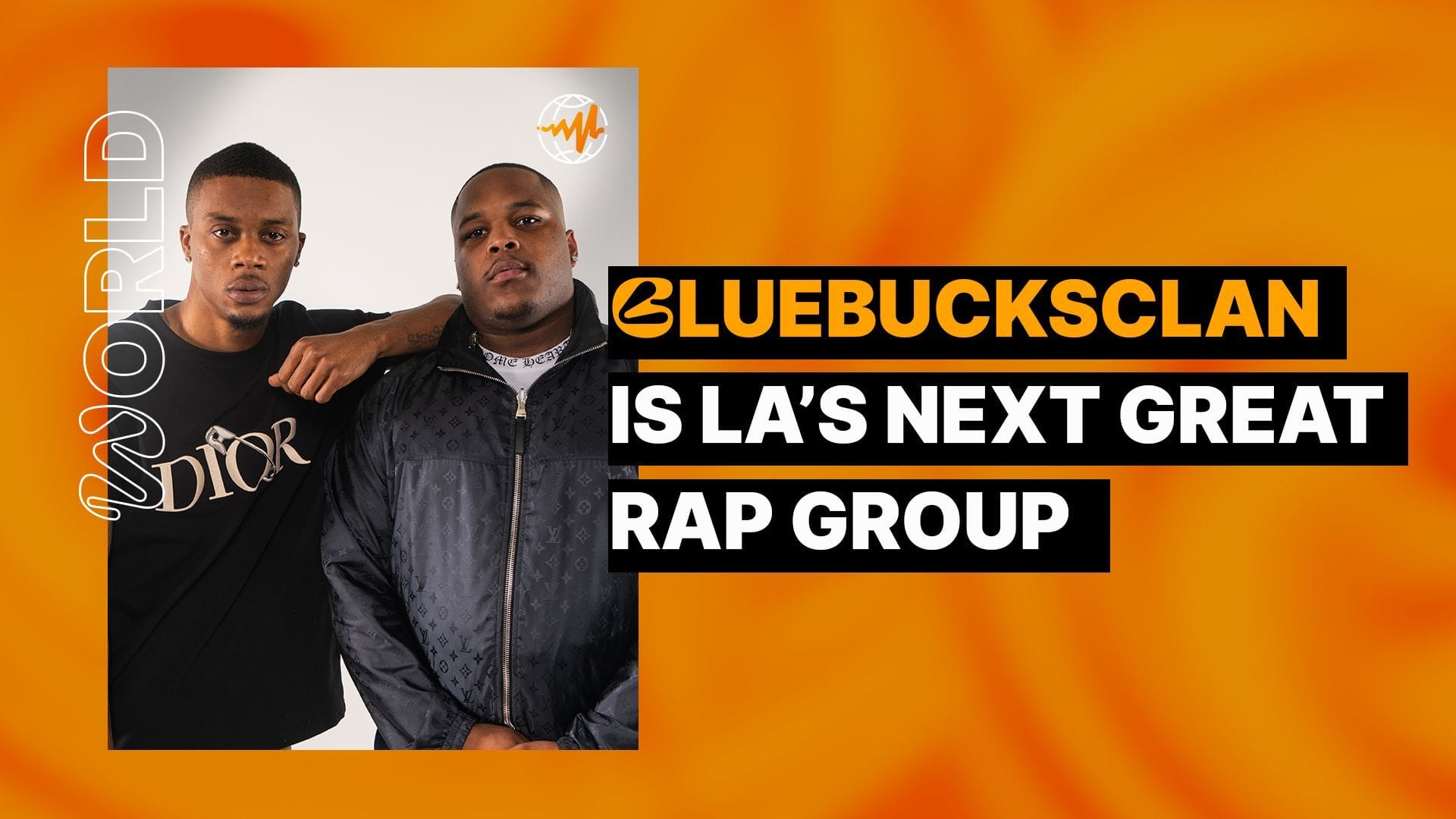 Not long before the city ordered them empty, BlueBucksClan showed how they can transform a block without mandates. It’s March 11, 2020, on the Eastside of Los Angeles in a neighborhood south of Staples Center, the last full calendar week before California’s stay-at-home order due to the coronavirus. The nihilistic megaliths branded as “new ways to think about housing” aren't that close but you can still see their silhouettes gently creeping south. Here, it’s as if every house is competing for the boldest trim color, with turquoise beating out hunter green only to lose to a cheddar orange house a few blocks later.

The tame scenery changes once DJ and Jeeezy, the two members of BlueBucksClan, arrive. Five minutes later a neighbor across the street is playing their biggest hit, “Walkin’ In,” from oversized speakers on his porch. Lines about “Dior on my feet” echo off stucco walls as DJ poses on the sidewalk in black and green Dior B22s. They’re gathering around a burgundy Mercedes-Benz GLE 450 even though the song is talking about a Rolls-Royce Cullinan. No one holds it against them.

BlueBucksClan seemed to arrive out of nowhere. Their first tracks (“Earthquake,” “No Clowns”) appeared in the summer of 2018 with a handful of other rappers from their friend group. By the beginning of 2019, “DJ x Jeeezy” were the only names listed on each song. Then, there was “Make N****z Leave.” The video, filmed by frequent collaborator Tevo LaRon, was an impromptu shoot at Phoenix’s VLive strip club after a show was canceled last minute.

“We said, ‘Fuck it, we’re just about to go to the club,’ and took footage there,” says DJ, the older of the two at 27. “That’s it. That became the video. We’ve known Tevo LaRon since back when we went to high school, probably [from] playing football or something.”

The 25-year-old Jeeezy adds: “That strip club was incredible. I ain’t never seen them do tricks with hoops and shit like that.”

DJ and Jeeezy are telling me this while sitting on a couch in a three-room backyard bungalow spot. DJ, the more talkative of the duo, treats the entire interview process like an episode of MTV Cribs and announces “AUDIOMACK AT THE TRAP” when he introduces friends and family. A screen in a backroom shows the live feed from a dozen cameras around the property while the living room television has YoungBoy videos on silent for the entire conversation. The BlueBucksClan hoodies they’re wearing went on sale the next week. 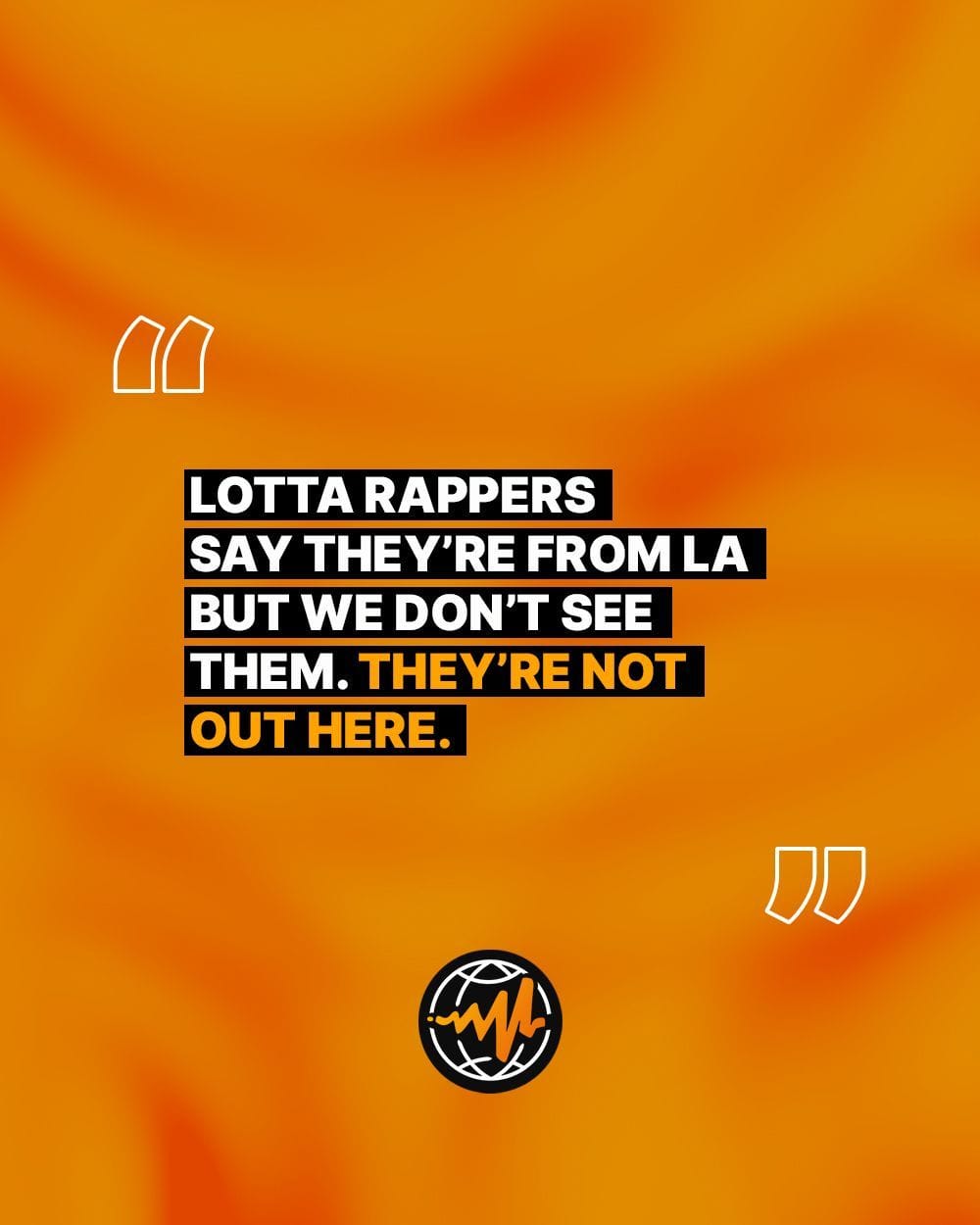 Almost a year later, I’m on a Zoom call with Jeeezy, DJ, and a handful of A&Rs and managers catching up on their past year and lamenting the tours that could have been.

DJ and Jeeezy are in separate locations, the former doing chores around his apartment and the latter reclining in a parked SUV. They seem energized and anxious to perform after a nonstop year of recording and tweaking their “style,” which, according to them, is not really a style. “I just talk it,” DJ says, donning the crux of their negative social media comments proudly, the way he would a Balenciaga sweater.

Despite what they might say, you can hear them cementing their distinct chemistry on their new album, Clan Virus 2. Jeeezy talks about women encouraging him to try new foods, sushi specifically, on “Aaron Judge.” They trade bars with Lil Yachty in his genuine quest to geek out and indulge regional idiosyncrasies on “Last Minute.” DJ makes it cool to include coordinators in shoutouts (“I can show how to run these plays like Sarkisian”) on “Horace Grant.”

“He actually reached out on Twitter and said he liked the song,” DJ clarifies, referring to Steve Sarkisian, now the head coach of the Texas Longhorns, who was the defensive coordinator for the University of Alabama when the lead single was recorded. On Clan Virus 2, when they’re not being soundtracked by their usuals Ten11 and AyyMook, they grab beats from established names like DJ Mustard and Hit-Boy to accompany Lil Mosey and Quavo features, respectively.

They can’t go outside and make a venue jump right now, but BlueBucks have maintained the irreverence it takes to stand out in Los Angeles. They choose nimble production that gives them space even on slappers and shows the depth of LA’s producer talent; LowTheGreat’s springy kicks will sit next to a subtle atmosphere whipped up by Cypress Moreno. The Clan Way tapes and Clan Virus 2 are primers on LA geography that out-of-towners can use until travel becomes a thing again. If nothing else, you’ll learn how many quarter-mile drag strips exist between Washington and Rosecrans.

First, who came up with BlueBucksClan?

DJ: Aw man, it just came from a crew of dudes with money, after money. It’s just a tongue twister. People can’t forget it.

How did you meet?

DJ: Childhood, football, being in the neighborhood. We probably knew each other since like 10 years old.

You both played football in college?

DJ: I played cornerback at Western Oregon. I wanted to do football. I was up there for three years from 2013-15. I kept getting hurt and that’s why I dropped it. I had three surgeries back-to-back-to-back.

Jeeezy: I went to Robert Morris University in Chicago and played safety. That’s all I ever wanted to do growing up. Had to find something else to do, though. In college, they take the fun out of it. I didn’t really have love for the game anymore.

When did rapping start?

DJ: We started seriously at the end of 2018. We were all already friends and cool. We just started going to studios to chill, see what we would get into. It sounded cool so everyone pushed for us to keep going.

First song you did together?

DJ: “Earthquake.” That had a few people on it. Right now it’s just me and Jeeezy rapping but there’s a lot more to BlueBucks. Might be some more rappers pop up, you know how it is.

What was the first rap you remember?

DJ: Shit, Snoop Dogg and Tupac. I remember listening to Snoop on the way to little league games.

Jeeezy: When I first started listening to music, the first CD I had my mom buy me was Young Jeezy. Then I started with Lil Wayne.

DJ: Shit, I remember switching iPods in between classes. All Lil Wayne all day. He’s the best rapper from our generation, hands down.

What made you focus on rap?

Jeeezy: We just started getting better at it and I knew people were gonna like it. I was just like, “Damn I need to keep working at this.” I used to work the night shift at Parsec, railroad company shit. DJ used to always call me when I was at work like, “Where you at?” We had videos out already too. I knew it could work out. I was tired of going to work, too. I hate that shit.

DJ: People were fucking with what we did at first, so we went all-in with it. All the way crazy, disrespectful. That’s what they wanted to hear so fuck it.

Did it take some time to hammer out a style?

DJ: I don’t even got no style. I don’t know what the fuck people be talking about when they say that. I just walk in and say the shit. I talk it.

Jeeezy: I mean we’re out here in these streets every day, so we’re gonna talk it.

DJ: You gotta do it right and show them. Lotta rappers say they’re from LA but we don’t see them. They’re not out here. People not from LA are getting tricked by a lot of these rappers. Nothing wrong to not be from LA but we’re gonna show you what it really is.

Jeeezy: What middle school you went to.

DJ: LAUSD period. Elementary, middle especially. Them younger days. Where did you go? Who knows you? LA is big, but not that big. If nobody knows you from LA then how are you from LA? Out of all these schools, somebody knows you. Even if that’s your enemy, you know them.

Did it take long to work out a rhythm recording together?

DJ: Shit, he can’t do the whole song by himself. [Looks at Jeeezy] You know you can’t do more than a 16. If he got that much hard shit and keep going, I’ll let him. If he do an 8 or 12, that’s what I’ll do. Sometimes when I go first, he’ll be like, “Damn you gonna do the whole song?” We never had no problems though.

Jeeezy: That shit be random. It don’t even matter.

Do you teach each other things?

DJ: We’ve been learning this together, so as much as we could [while both] learning ourselves. It be cool though. We judge each other then and there. If he say something that ain’t right, I’ll tell him to change it to “this.” And he’ll do the same for me. “Say it this way,” some shit like that. I might think of some shit for him to say too ‘cause his delivery is different. Some shit I say, it sounds way harder when he says it. It be different though.

Favorite bar from each other?

DJ: Probably his whole verse on “Smith-Schuster.” He got a lot of hard shit he be saying. We made a song yesterday and he said something wild too. “Eating breakfast with your son, he like Cap’n Crunch.”

Jeeezy: I be saying crazy shit every time though.

DJ: That’s what’s expected of us.

Jeeezy: Mine is when DJ says, “Leaving bitches where I want like a Bird scooter.”

What bullshit came from rapping that you didn’t expect?

DJ: You learn all that on the business side. I don’t like how niggas be acting. Niggas be acting weird. It’s the same people that wasn’t fucking with you though. That’s why I don’t like it. Like if I asked y’all to do an interview five months ago and y’all said, “Hell naw,” or you told me to pay you $5,000 for it. Then you’re begging me for an interview today? That’s weird.

What’s an unexpected benefit or joy you get from it?

Jeeezy: Getting a gang of free shit.

DJ: Everybody wants you to wear their clothes. We got our own clothes now though.

You can only drive one car for the rest of your life.

Jeeezy: I’ll go with the Rolls [Royce] truck then.

DJ: It’s so big though. It’s like driving this couch right here.