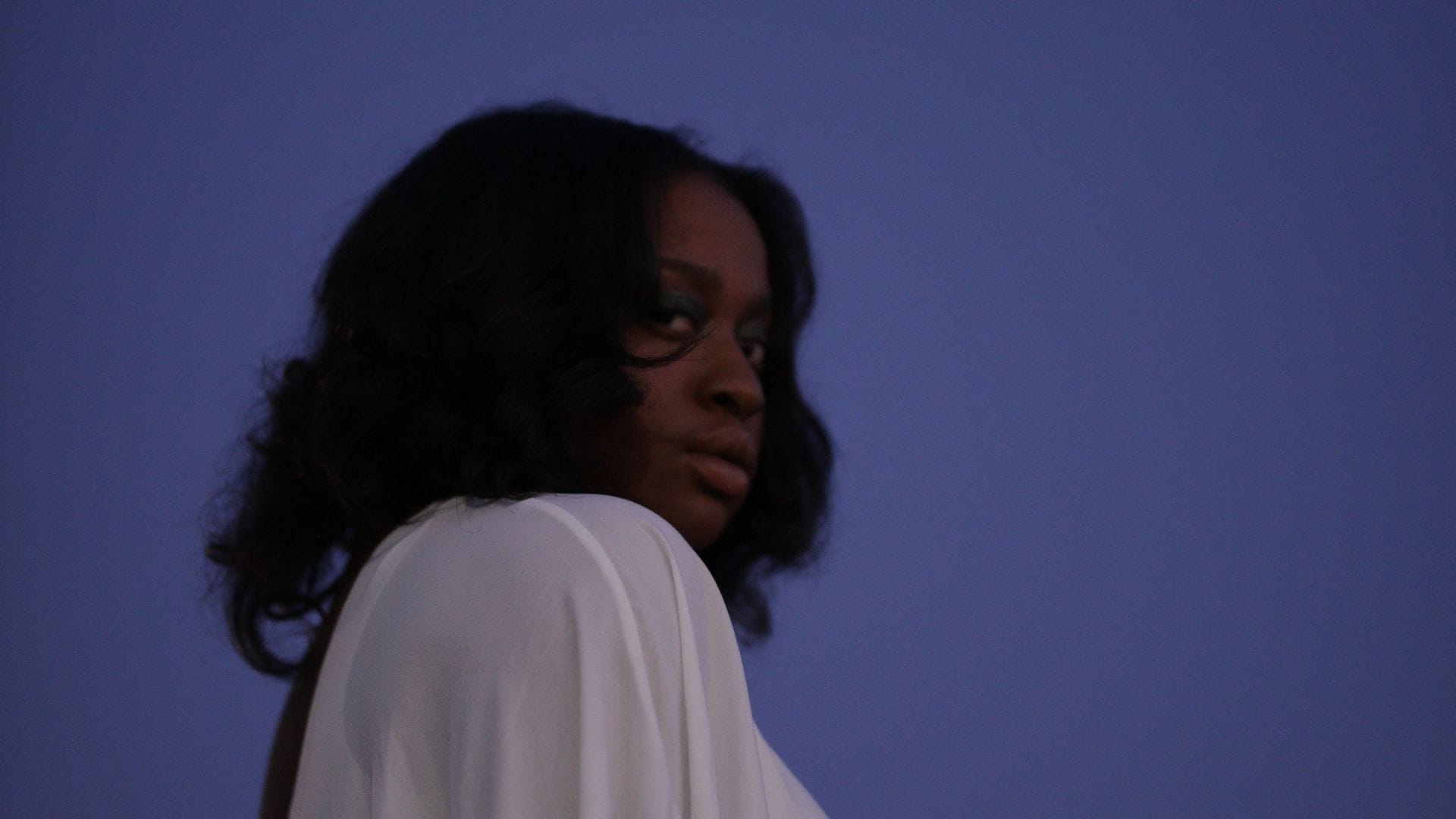 Barbadian-born and LA-based Ayoni has a natural talent for songwriting. In 2019, the singer, 20, released her debut album, Iridescent, which was nearly 30 minutes of what should be grand music standards. Ayoni’s unbeatable voice carries critical songs like “Santa Monica” and “September,” her sweeping vocals amplifying the depth and breadth of her lyrics. Each song on Iridescent blossoms into the next, with Ayoni pursuing peace through the lens of a heavy heartbreak.

Back in October, I wrote: “The emphatic and hyper-specific ‘September’ is proof Ayoni dips her pen in a rich ink.” With the release of her newest single, “Unmoved (A Black Woman Truth),” out today, Ayoni continues her now well-established tradition of unraveling herself and the music industry with sharp lyricism. The gentle strumming of “Unmoved” acts as a perfect bed for the truths Ayoni tucks behind the stacks of her sinewy voice.

“‘Unmoved’ is the most vulnerable I’ve ever been about my experience existing as a Black woman in this world,” Ayoni wrote in a statement released with her new single. Her vulnerability—just look at the line “I’m 20 years of breakdowns and mantras”—both invites us into her world and makes us interrogate the systems driving her to create the song in the first place.

More than an amazing musician, Ayoni also puts her politics at the center of her work. All proceeds from “Unmoved” will be donated to Black and Pink, a US prison abolitionist organisation supporting LGBTQ+ and HIV-positive prisoners. In an era where direct action is critical to progress, Ayoni stands above the empty statements permeating the music industry. She is one-of-one.

My conversation with Ayoni, lightly edited for content and clarity, follows below.

Walk me through the making of “Unmoved.” When did you realize you had to write the song?

I wrote this song back in January 2019. I was really depressed at the time, because I felt like going to a predominantly white institution like USC, I was hyper-aware at that moment in time that being a Black woman in those spaces… We are not valued, vouched for, or defended.

There was an experience at school that kicked this off. I witnessed, in the music world, the way [Black women] are disrespected. That triggered this really heavy realization that I feel like my entire life I’ve kept it pushing, but that was my breaking point. This is not okay, that we are in spaces that we don’t feel seen, or valued, or heard.

I really wanted to write a song where hopefully you get a glimpse into what it feels like to be a Black woman. I sat on it for a really long time, because I felt like I wanted to be speaking truth to power in my music, but I always want to know when I’m putting music out that people are ready to receive it. This song is not necessarily for Black women—we know our experience. It’s more for other people that don’t understand the psychological weight that has.

When everything started growing with this revolution in the beginning of June, I was like, ‘Alright, this is the time to really speak.’ Hopefully it brings Black women a lot of peace. Most importantly, I want people who haven’t had to experience being cast aside by society so massively to really take from this right now. 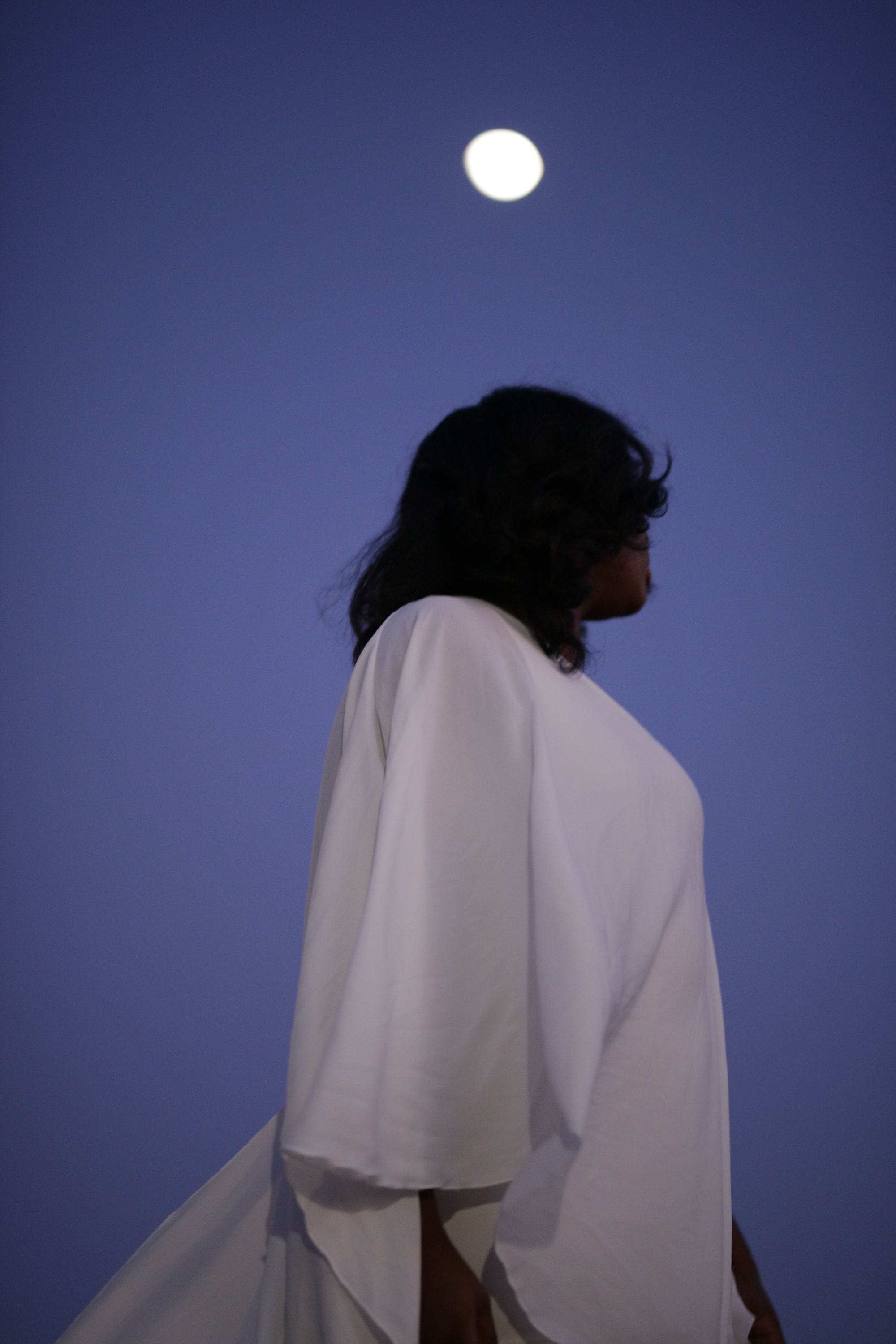 “Unmoved” feels like a moment of revolution for you. What is revolution in 2020, as it relates to your Blackness?

Revolution in 2020 is just being truthful. Truth is always a revolution. I put out Iridescent, and I did the different runs to meet different people in the industry. In a lot of the meetings, I wasn’t seen. As a Black woman who’s creating music that, arguably, could touch pop in a sense… In so many different genres, so many people were like, ‘I want you to do this.’

At first, I felt I had to be marketable, but now I’m realizing that the most revolutionary thing you can do is be honest and speak truth to power. My revolution is holding nothing back and being proud of my Blackness and what I’ve overcome. Not feeling like I have to make that smaller, or consumable, or make people comfortable with my pain. I’ve done that many times just trying to not burden people. Now, my revolution is speaking truth and trusting it will be received.

When Iridescent came out, I was realizing: “Wow, I really want to be more political. I want to challenge things more. I want my presence in music to shake shit up!” I couldn’t believe the world would ever meet me where I was, and the revolution is here. It’s amazing! I never thought I would really have the ability to at least feel safe in speaking my truth. I’m terrified—still. But I’m the most ready.

In a statement you sent with the single, you wrote: “‘Unmoved’ is the most vulnerable I’ve ever been about my experience existing as a Black woman in this world.” In the music industry, do we punish Black women for being vulnerable?

In general, revolution has always been consumable for us as a society. We love Hunger Games; we love Star Wars. We love revolution when it’s somewhere else. When it’s in our own backyard and being delivered by someone we—as a society—don’t believe has the right to be more enlightened, it makes people extremely uncomfortable. With this song specifically and my career, absolutely we punish Black women for being vulnerable.

Sometimes we assume the most dangerous [people] to Black people are the super-racist, but it’s also the people who identify as liberal and hold so tightly to being a good person and wanting to feel like a good person, that when it’s time to have conversations about microaggressions or unintentional actions—people get uncomfortable. Being a Black woman in this industry, we often have to be prepared to be shut out for speaking truth to power. We like to pretend that isn’t the case, but it absolutely is. The only way we can keep breaking that down is to keep speaking up.

You sing: “I’m 20 years of breakdowns and mantras.” Would you mind opening up about that line?

What was most painful for me at the time was I felt that “You get a new leader and think you know trauma.” People were like, “Oh, my God! Trump!” And seeing America, for the first time, the way we had always seen it.

For me, it was like, “How dare you make that the start of your understanding of America’s oppression. I spent my entire life literally crying in bathrooms and saying stuff to myself to make it through the day.” I’m 20! I’m young and since I was a child, I’ve had to be so strong and endure so much and make it through things I shouldn’t have had to. [‘I’m 20 years of breakdowns and mantras’] came from a place of ‘I need you to understand what my presence is.’ It’s not something to be taken for granted.

What is your ultimate truth as a Black woman in music?

My ultimate truth is to endure! I always wanna make it clear that not every Black woman is strong all the time or unmovable. We feel things and sometimes it gets too much.

What I can do is just be unrelenting. I’m going to continue to create. I’m not gonna be swayed by the capitalist approach to music. I can be myself and speak truth to power, and I just refuse to go. I want my voice to always be a presence in music for whoever will find it.

Lastly, you’re giving your proceeds from “Unmoved” to Black and Pink, a US prison abolitionist organisation supporting LGBTQ+ and HIV-positive prisoners. Why is that important to you?

Black and Pink is important because it’s an organization fighting alongside incarcerated LGBTQ+ people who may always be living with HIV and AIDS, for prison abolition. Prison abolition is something I’m really passionate about. I feel like, in this movement, it has not been as central as it can be. I wanted to bring awareness with this song and encourage people to remember our queer community that needs our support.

With each royalty cycle, I want to find a new organization to donate to. I wanted to start on this note to hopefully encourage and remind people about the conversation around prison abolition and to end Pride Month honoring our brothers and sisters.

By Donna-Claire Chesman for DJBooth. Photos by Caleb Griffin.