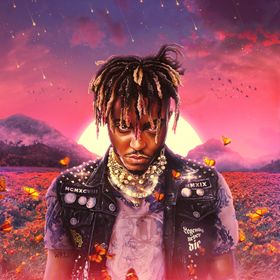 About “Legends Never Die”  Juice WRLD’s first posthumous album, Legends Never Die, was originally rumored to be named The Outsiders based on a freestyle he did within an Instagram live, but was later confirmed to be Legends Never Die four days before the release. Additionally, during an Instagram live stream six months after his death, Juice’s girlfriend, Ally Lotti, hinted at the original album title, but seemingly delayed its release: Remember we were talking about The Outsiders… That actual album, no one is ready for it. I’m not ready for it. And I promise you, you are not ready for it. The first promotional single for the album was titled “Righteous“ and released in late April 2020. The following month, the label followed with the release of “Tell Me U Luv Me,“ another single with frequent collaborator Trippie Redd. Multiple demos of the album surfaced on the internet in early 2020 and consisted of up to 30 of his tracks, such as “Righteous,“ “Bad Boy,“ and “Tell Me U Luv Me.“ However, none of these tracks were officially confirmed to be on the album. In the first few weeks of June, Juice’s label teased snippets for multiple tracks such as “Cake,“ “Molly & Mike,“ and “Don’t U

Purple JFucked In My Girl's Car

Purple JDemons In My Head

Sean Paul, Khaid, Joony, Li Heat, and Dehd all have albums you need this week....

“You Spill Out What You Are Inside”: An Interview With Audrey Nuna

The experimental artist is a student of her Korean heritage....