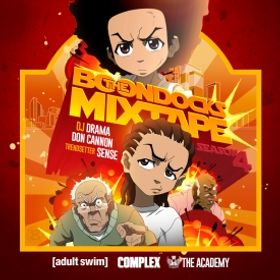 On April 21, Adult Swim’s “The Boondocks” will kick off its 4th and final season. After enduring some pretty incredible adventures over thepast three seasons, this final one promises to take Granddad Freeman and his two roguish grandsons, Huey and Riley, to new comedic heights with their exploits. To celebrate the show's fantastic run, a number of its very talented fan/friends got together to curate a Boondocks-inspired mixtape. The mixtape features some amazing up-and-coming artists from across the country, including Two9, Lil Herb, Skeme and Troy Ave., as well as the new single “The Boonies”, written and performed by Killer Mike and produced by Alchemist. And be sure to tune in to the final season when it premieres on Monday April 21 at 10:30 p.m. EST on Adult Swim

DJBooth has no other uploads.

Black Sherif, G Herbo, Toosii, Jean Dawson, and Samaria all have albums you need this week....

Getting to Know the Real G Herbo

The Chicago rapper gets candid about fear, legacy, and good food....

The East African artist puts his charm on full display....

With Victony on the remix, the Amapiano artist breathes new life into a banger....