Residing in Dallas, born and raised in Memphis, TN, the lifestyle of the young and wreckless is what influenced me to write about the struggles and what I've done to better my life. I started writing songs in 3rd grade. I stopped in 2008 after I was robbed. I took that as a warning sign and changed my life. My son was born, I went to college, was engaged, and focused my career. In 2013 I was transferred to OKC for work and in August 2013, I picked up the pen and pad and began writing. 9 months later, I've completed 2 mixtapes and is set to release my very first mixtape on Memorial Day 2014 titled: "The Virtue of Patience." I am also hosting a Traps N Trunks on Memorial Day 14 available on Livemixtapes. 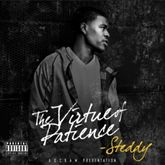 Steddy The Virtue of Patience