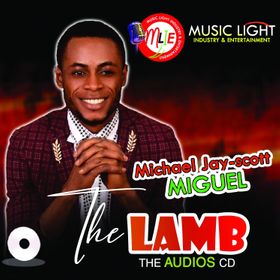 THE LAMB is a song by revelation written and composed by Michael Jay-Scott Miguel. The inspiration came form a verse in the Book of Revelation in the year 2019 and recorded 2 years later which says: THE LAMB IS WORTHY THE LAMB WHO WAS SLAIN HE IS WORTHY TO RECEIVE WISDOM, STRENGTH, POWER & RICHES. FOR THE LAMB IS WORTHY HE'S THE LAMB WHO WAS SLAIN HE IS WORTHY TO RECEIVE HONOR, GLORY & BLESSING. The song was recorded December, 2020 and released on the 1st of January, 2021 by MUSIC LIGHT INDUSTRY AND ENTERTAINMENT for the very first time and being the first album which went on sales of 200 in 3 days and more achievement like an award concert which took place on the 19th of February, 2021 where an Award was presented to Michael Jay-Scott Miguel for excellent performance.

Michael Jay-Scott Miguel (RN) has no other uploads.