Miguel was born in San Pedro, California, on October 23, 1985. Miguel began writing songs as a teenager and signed his first recording contract in 2004. He gained attention for his 2010 release All I Want Is You. His next album, the 2012 record Kaleidoscope Dream, garnered critical acclaim and contained the hit single "Adorn," for which Miguel won the 2013 Grammy Award for best R&B song.Miguel Jontel Pimentel was born in San Pedro, California, on October 23, 1985. His father is Mexican-American and his mother is African-American. Miguel's parents divorced when he was 8 years old, after which he and his brother lived primarily with their mother. Miguel listened to R&B, funk, hip-hop, rock and jazz as a child, mostly due to the diverse musical tastes of his parents. By the age of 14, his tas 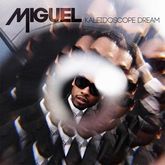