Nasry Ramadhan Malala Who Is Well Known By His Stage Name Iyanizzo Is A Kenyan Rapper And Afro-beat Artist  He was born In Aug 6,1999 at a place called Kitale Trans nzoia county,Kenya.  He Grew Up With His Brothers and a Sister After Her Mother Passed away on 2010 In mitume Village, His Passion For Music Started In early 2012 When He Was Still In Primary School, Where by he found it very difficult to balance both music and education since he used to go to the street for Music Rap Battles and he never loosing any of them and this inspired him to pursue music further 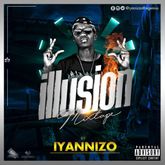