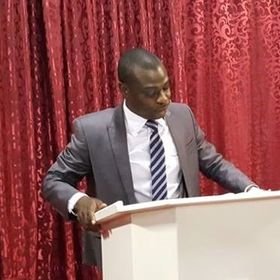 The masterpiece Bride part 3 preached by Pastor David Tshibambe on Thursday, 19 July 2018. John 14: 12-20 Joel 2: 28-32 Acts 2: 1-3 ; 13-20 77 Now, when It said here that He emptied Himself, or poured out, now, we would think like this, that He “vomit up,” the English word of emptied, or poured out from Him, see, something went out of Him that was different from Him. But the word kenos, in the Greek, does not mean that He “vomit up,” or some…His arm went off, or His eye went out, another person. 78 That is, He changed Himself, He “poured Himself into,” (Amen!), into another mask, into another form. Not another person went out of Him, called the Holy Spirit, but It was He Himself. You get it? [Congregation says, “Amen.”—Ed.] He Himself poured Himself into the people. “Christ in you!” How beautiful, how wonderful, to think, God pouring Himself into the human being, into the believer. “Pour out!” It was a part of His drama, to do so. God, all the fullness, all the Godhead bodily was in this Person, Jesus Christ. He was God, and God alone. Not a third person or a second person, or a first person; but the Person, God veiled in human flesh. 79 First Timothy 3:16, “Without controvers