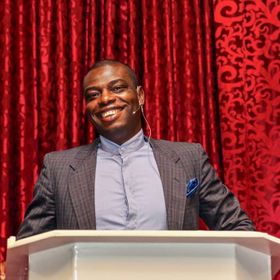 Pastor David Tshibambe Being restored by an unconditional covenant part 2

Being restored by an unconditional covenant part 2 preached by Pastor David Tshibambe on Sunday, 20 May 2018. Genesis 12: 1-3 Hebrews 6: 13-20 Hebrews 8: 7-11 Ephesians 1: 3-4 Romans 8: 28-39 83 Before anything can happen out here to make you be a Christian, something has to happen in the heart, here, to turn you to Christianity. That’s right. It’s election. God does that. 84 The father Abraham was the first one, that I know of, this side the flood that was called by grace, by election. God chose Abraham, not because he was Abraham, not because he was any good person. God chose him because he was elected. God did it. 85 Now, I want to say something. You can never make yourself something that you’re not. If you’re just impersonating Christianity, no matter if you’re preaching the Gospel, you need an altar call in your soul. That’s right. If you’re just trying to act like that person that’s a Christian, you’re miserable yourself, knowing in your heart that you’re not. 54-0306 - The Unconditional Covenant That God Made With His People Rev. William Marrion Branham 91 Notice, after he did that, Abraham, when God called him, was seventy-five years old. And Sarah, his wife, was sixty-f