DJ G-Money, who is known for keeping the dance floors packed with mixes that have partygoers entranced for hours. Well respected amongst his peers G-Money has established himself as a pillar of the South Carolina Hip-Hop community. Bringing to the table his vast knowledge of rap history and the Hip-Hop Culture he has proven to be an asset to any project he is involved in. You can catch G-Money on the grind as he continues to define the sound of the Carolinas at WWWZ (Charleston), WIIZ (Augusta), and at WLZN (Macon, Georgia). He keeps the streets on lock by dropping some of the hottest mixtapes around. Whether it’s Old School or New School, he has people asking for more. He has had the opportunity to open for some of the biggest in Hip Hip. Outkast, Total, Pastor Troy, Cee Lo are just a few 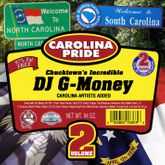