City Rominiecki has had no shortage of catchy hooks including his most recent appearance on IDK's "Keto" record featuring Swaelee, Rico Nasty, and produced by The Neptunes. His pen has landed him noteworthy collaborations with artists such as Lil Wayne, Usher, Ty Dolla $ign, Sevyn Streeter, Kodie Shane, and others. A talented underground rapper, singer, songwriter, Rominiecki, hails from Uptown Philadelphia, where he grew up to the sounds of Frankie Beverly & Maze, Lauryn Hill, and T Pain. This influenced his unique sound and helped shape his storytelling abilities. City’s melodic voice, original flow, and caption-worthy hooks blend with his verses, giving each and every song an undeniable replay value. 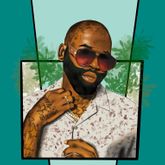