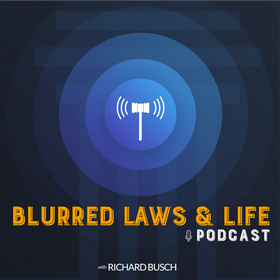 This is Blurred Laws & Life with acclaimed lawyer & litigator Richard Busch. On this second episode, we discuss: Having a blast doing these podcasts, interviewing music legend Al Bell & how they met, The Behind The Scenes of Litigation & the stakes, how he began his career, Entertainment Lawyer Relief Act 2001, Atomic Dog & Copyright Infringement, Winning & more. Then it's an honor & a privilege to have the legendary Al Bell join us on Blurred Laws & Life with Richard Busch to discuss: Being thankful that Richard is doing a podcast & the mutual respect they have for each other, the last time that they were together & Richard vs. Joe's Crab Shack, how they met at a low point in Al's life in 2002 & filing a lawsuit together, Al's life in the music industry landscape, losing multiple siblings, writing "I'll Take You There" in 1972 after the death of his brother & the story to how it was created in the backyard through tears, Stax Records, Segregation in Memphis, Tennessee, The Oasis, Racism in Arkansas, becoming a Senior Executive at Stax Records, being in the radio industry to start, These Arms of Mine by Otis Redding exploding on the radio, taking over as National Programs Director at Stax Records after being offered equity interest in the company, taking a pay cut but believing in the company, making music that resonates with people enough to sell, Some of the biggest artists & hits he worked on at Stax Records & other companies, Isaac Hayes & "Hot Buttered Soul", having a great staff of writers, charts from Stax & how the government wondered if it was Payola, Otis Redding being the lead horse by setting the standard, recording "Sitting on the Dock of the Bay" the night before his tragic plane crash in Wisconsin, publisher of "Try A Little Tenderness" suing Otis Redding, getting into songwriting & becoming a Disc Jockey, wanting to learn the story of an entire song, music diversity taste of African American listeners on radio, the 3 verses in song writing, promoting Stax Records from city to city & finding out the different kinds of music being played there, Isaac Hayes' Shaft Theme winning an Academy Award for Best Song & how he convinced MGM to let it happen, buying billboards on Sunset Blvd & getting White America to appreciate the song, Performing at the Oscars and the fight to make this happen, selling 1 Million Units the next day, the Top 4 songwriters that he worked with, the Blurred Lines lawsuit, the loss of Otis Redding & what he meant to the artists at Stax Records, Jim Stewart, living 5 lives in 1, the trial of their lawsuit a together, Tag Team & "Whoomp, There It Is", Hip Hop artists sampling pre-existing music without licensing it & ultimately leading to the organization filing bankruptcy, the story of the lawsuit that they won together, having his music compositions being taken over by DM Records due to financial concerns, how Hurricane Katrina affected the lawsuit, the arguments that the opposing side made, winning the case & the jury applauding them, how he's spending Quarantine in Little Rock, Arkansas & more.  New Episodes air every Thursday at 6PM EST/3 PM PST Follow @BlurredLaws on Instagram & Twitter Please email any questions you'd like answered on the podcast to BlurredLawsPod@gmail.com Music Provided by FreePlayMusic.com

Blurred Laws & Life Podcast with Richard BuschCHAPTER 44: A Day in the Life of The USA: I Think We Might be in Trouble

Blurred Laws & Life Podcast with Richard BuschCHAPTER 42: Catching BL&L Nation up on Everything That Has Happened in the

Alkaline, Taleban Dooda, Big Jade, Paris Texas, and CRYS all have albums you need to hear this week on Audiomack....

The Philly rapper links with EST Gee for a street anthem....

After soundtracking generations of R&B hits, the GRAMMY-winning producer shares his 8 keys to crafting a signature sound....

The "Quicksand" rapper opens up about fame, family, and finding his voice....

Charlie Heat’s Guide to Finding Yourself as a Producer

The veteran producer, known for work with Kanye West, Lil Uzi Vert and more shares his 8 tips for success....