10STACKZ first garnered national attention and commercial success with his hit single, “Drip”, off of 2016’s Me vs Them mixtape. Lyrics from “Drip” and other songs from Times 10 have since become popularized in rap music today, establishing 10STACKZ as a possible trend-setter in the industry. He has toured with several platinum selling artist, with acts like Lil Baby New Generation Tour, and has previously opened for Future, Blue Face, City Girls, and Rick Ross. 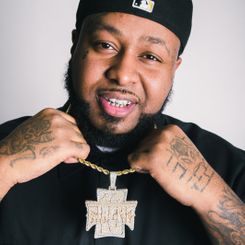